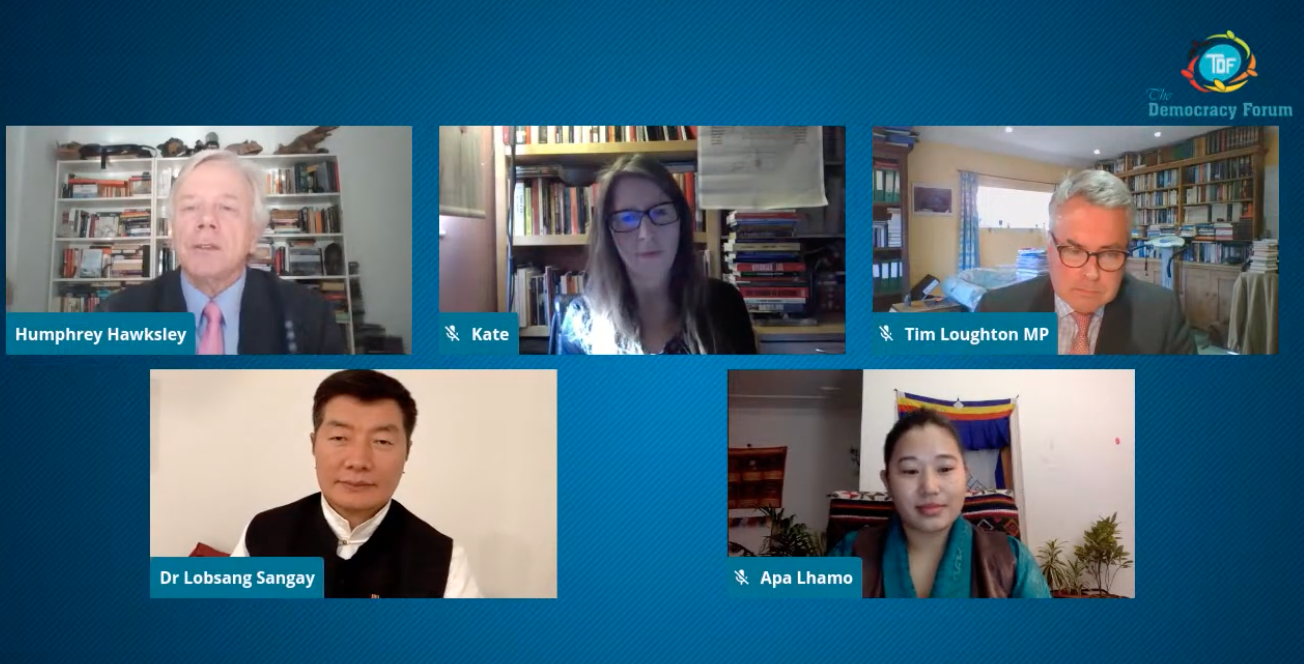 Dharamshala: Days after the history-making meeting of the newly appointed US Special Coordinator for Tibet issues Robert Destro with CTA President Dr Lobsang Sangay that marked a major shift from US policy and a major milestone in Tibetan movement, Dr Lobsang Sangay was invited to a virtual seminar organised by Democratic Forum.

“Tibetans have been forced to endure a calculated and systematic strategy aimed at the destruction of their national and cultural identity. It is clear now, Tibet has become a model for the apparatus of the Chinese state repression, a dystopian process consisting of 4 elements-deflecting international pressure, limiting foreign contact, monitoring and interference, swamping a territory’s native majority with economic development and internal migration and blanketing it with surveillance and personnel.”

He also highlighted the growing support for Tibet from the international community marked recently the US government’s adopting of policies, the Tibet Support Act and Tibet Reciprocal Access which penalised the Chinese government and officials.

Similarly, the British MPs across party affiliations recent criticism of CCP for its attempts to eliminate Tibetan’s cultural identity and to erase their ethnicity and the subsequent research commissioned by Inter-Parliamentary Commission on China revealing the mass scale forced resettlement of small farmers and labourers, reeducation training, under military supervision.

CTA President Dr Lobsang Sangay emphasised that the very principle of democracy is at threat if China is not held to account.

He said, “Either we transform China, or China will transform you”.

He noted that it is a war of “philosophy, ideology, mindset”.

Chinese incursions at Indo-Tibet border stemmed from the core unresolved issue of Tibet which, Dr Sangay stated needs to be demilitarised and restored to its former status of a buffer, a zone of peace.

It is in the interest of peace and stability for Asia, he said.

He cautioned that Tibet’s water resource could also become the next flashpoint in the subcontinent.

“China has not signed the UN convention for water sharing and they are not obligated to share water with people downstream. Tibet is the source of water for 1.4 billion people in the continent. If China controls the flow of water by constructing major dams, it affects millions of people downstream. In Asia, they are facing a water crisis”.

The report authored by Adrian Zenz on Tibet which revealed “half a million Tibetans were put in concentration camps from nomadic areas under set quotas to bring Tibetan youth to urban setting where they are given livelihood skills in military drill-like systems, done in the name of poverty alleviation. China’s poverty alleviation project has been hailed a success by the international bodies like the UN, however, for Tibetans and Uyghurs, it means uprooting them from their culture, family, traditional livelihoods to military setting and drill them skills to sinicize them and assimilate them into Chinese culture and turn Tibet into a China town.”

He also raised concerns of China’s unchecked manipulation in the UN and international institutions.

Not checking these violations enable the CCP to redefine human rights and legitimises the repressive regime.

Apa Lhamo, PhD Research candidate at Jawaharlal Nehru University, detailed the extent of CCP based on her research findings, and close understanding as a former native who had escaped to exile in India.

She described the key policy and measures such as securitization, propaganda campaigns by subsuming Tibetan Buddhism, increasing governance and securitization of Tibetan borders. Securitization through surveillance measures by installing facial recognition technology in cabs in Tibetan regions, massive police recruitment programme and creating grid system which surveilled risk groups, i.e., believers of His Holiness, former political prisoners, advocates of independence, exile returnees and the policy of double-linked house systems making natives spy on each other. Propaganda campaigns deployed such as 1 million police into 1 million households that sought to make police presence normal, and creation of joint action groups to combat “separatist activities” at public spaces like cafes, night clubs, libraries ensuring surveillance at the maximum extent. In enticement, compliance is sought by awarding, rewarding compliant behaviours such as the recent trillion yuan funding for development in Tibet regions. Tibetan Buddhism is used in patriotism projects by CCP to interfere in all levels of monastery functioning from the appointment of Lamas, teaching, to the limit on the number of students, reincarnation matters to ensure loyalty to CCP, thus making religious figures the bridge between public and CCP. Border securitization oversees the administration of Tibetan border villages, visits from high profile officials, exchange programmes between mainland citizens and border villages.

The researcher expressed her hope that the support for Tibet would be sustained one and is extended irrespective of the political climate. She urged to look at Tibet from the larger perspective of geostrategic and environmental importance in Asia, on top of human rights and colonization issue.

British MP, Chair of the All-Party Parliamentary Group on Tibet, Tim Loughton welcomed the support for Tibet issue, noting the earlier minimal support calling himself “a lone voice” on the issue of Tibet which has gone under a significant change to enjoy support across political affiliations in the Parliament.

A version of the US Tibet Reciprocal process, that would remove access for government officials into the US if it is not reciprocated in Tibet drew China’s anger banning the authors of the bill, was proposed by the MP and received cross-party support from MPs of all the major parties. He expressed his hope it would soon become law.

He also highlighted demands for an investigation into China’s use of labour camp in Tibet, Xinjiang and other parts of China, along with the Magnitsky Act that could be used to penalize Chinese officials guilty as applied on Saudi Arabia and Russia.

MP Tim Loughton and Cochair Chris Law of the All-Party Parliamentary Group on Tibet had met with Parliamentarians across the world to push for access for foreign journalists and government officials to Tibet, to encourage resumption of dialogue between Chinese and Tibetan representatives.

The International Parliamentary Alliance on China (IPAC) formed by Parliamentarians across the world sought to put parallel pressure on China for its abuses and sponsored the research that revealed the militarised mass labour training programme in Tibet.

It “embolden politicians and governments to call out China for its abuses. It’s going on and it’s long overdue and not before time, but only by working together, can we call out China to say that your practices within your border are practically acceptable, your attempts to influence and suppress free speech and tolerance and fair practices across the rest of the world is completely unacceptable and it must stop.

She said China’s push for narrative control was apparent in the often-used phrase, ‘Tibet story to the world’ as used in Global Times to throw light on CCP’s use of new methods to narrate Tibet story in the 21st-century world with the aim to “break the connection, tear up cultural roots and instil a red gene”.

The author of the repressive model saw Tibet as an ethnic border region, at the forefront of the anti-separatist struggle that was used first in Tibet and then escalated it in Xinjiang to be reintroduced in Tibet at a larger scale.

She also revealed that the massive surveillance system in Tibet, facilitated by the biggest CCTV companies in the world, ‘Hikvision’ had established the system for the railroad in Lhasa and provides video surveillance cameras for the British House of Commons.

This strategy was deployed in tens of thousands by party cadres across monasteries, schools and homes installed with the aim of literally rewiring Tibetan thoughts and beliefs.

“Tibet is not a marginal issue for Beijing, it is not only regarded as a core issue for PRC’s territorial sovereignty but also a matter of China’s security and increasing geopolitical importance,” she emphasised.

On the environmental issues arising from China’s development projects, she said that the grassland depletion for which ironically nomads received the blame was scientifically proven to be the result of massive social engineering programme through which nomads have been displaced from their home and livelihoods for the last few decades that has reached its peak now, a sustainable practice that was suited for the landscape.