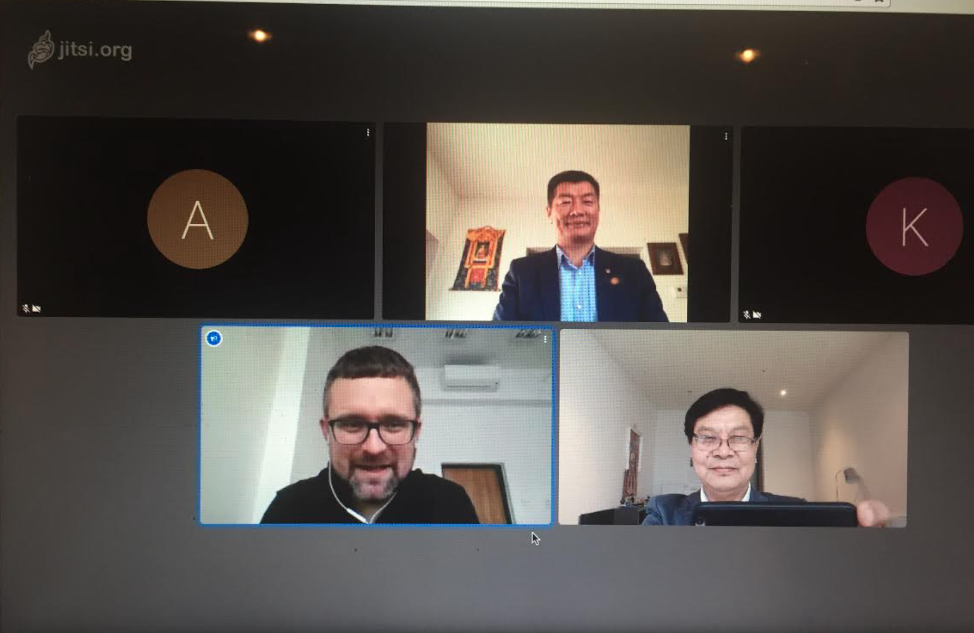 MEP Mikulas Peksa, President Dr Sangay and Representative Tashi Phuntsok speaking at the webinar on ‘How to Effectively Campaign for Tibet in the EU under the Pandemic Situation?’, 9 October 2020.

Brussels: The Tibet Interest Group (TIG) in the European Parliament held a webinar on October 9 on ‘How to Effectively Campaign for Tibet in the EU under the Pandemic Situation?’. The event hosted and chaired by MEP Mikulas Peksa, President of TIG was attended by CTA President Dr Lobsang Sangay as the guest of honour.

As MEP Carles Puidgdemont from Catalonia couldn’t attend it at the last minute, his Assistant Mr Aleix Sarri Camargo represented him. Representative Tashi Phuntsok of the Office of Tibet, Brussels was the other speaker.

Under the main theme: ‘How to Effectively Campaign for Tibet in the EU under the Pandemic Situation?’, two subsidiary topics were discussed: How can the EU achieve further successes in defending the rights of Tibetans and how could the coercing of Tibetans into labour camps be highlighted and addressed.

MEP Peksa invited the panellists and introduced the webinar. He was pleased that the webinar could be held after months of lockdown because of the pandemic. Many European countries are under the red zone, effectively being cut off from other countries. Like the Czech Republic, Mr Peksa’s home country, with the spike of the virus.

Mr Peksa briefly explained the activities carried out by the TIG. Most effective, he said, was the campaign for the Panchen Lama. Mr Josep Borrel, the High Representative & Vice President of the EU had responded to the petition of the 32 MEPs. As the discussion progressed Mr Peksa moderated on each of the above-mentioned topics.

Invited to speak first, CTA President Dr Sangay, complimented Mr Peksa for holding the webinar. He illustrated the ways China has almost managed to change the basic concept of human rights. China co-opts the elites of the country, be in politics, business, media and to win over to their side, he said.

China has recently brought out 2 resolutions in the Human Rights Council in Geneva to highlight poverty alleviation as the more fundamental rights of people than the other crucial fundamental rights, namely the freedom of movement, of association etc. This is how China manages to change the fundamental concept of human rights to suit Chinese interpretation, as having Chinese characteristics, he added.

He further added, China has aggressively used even the issuance of visas to China as the potential tool to enable visiting VIPs, business people or the media to kowtow to its wishes. He asked to check the current profile of former diplomats of European countries vis-a-vis China. Many have grabbed plumb jobs in the Chinese fronted organisations. Hence, he said that it was not the question of Tibet now, but at the stake is the preservation of European and the western nations’ core values and interests.

Dr Sangay spoke on the labour camps in Tibet. Over 50,000 Tibetans have been rounded up under this project. Tibetans are corralled from rural areas. Party functionaries in respective areas are given quotas to fulfil. Those brought together have to undergo military-style drills, training on ideological matters, shifted around Tibet or elsewhere under strict supervision. This report was brought out by Mr Adrian Zeng, Jamestown Foundation. He had earlier published on Chinese labour camp in East Turkestan. 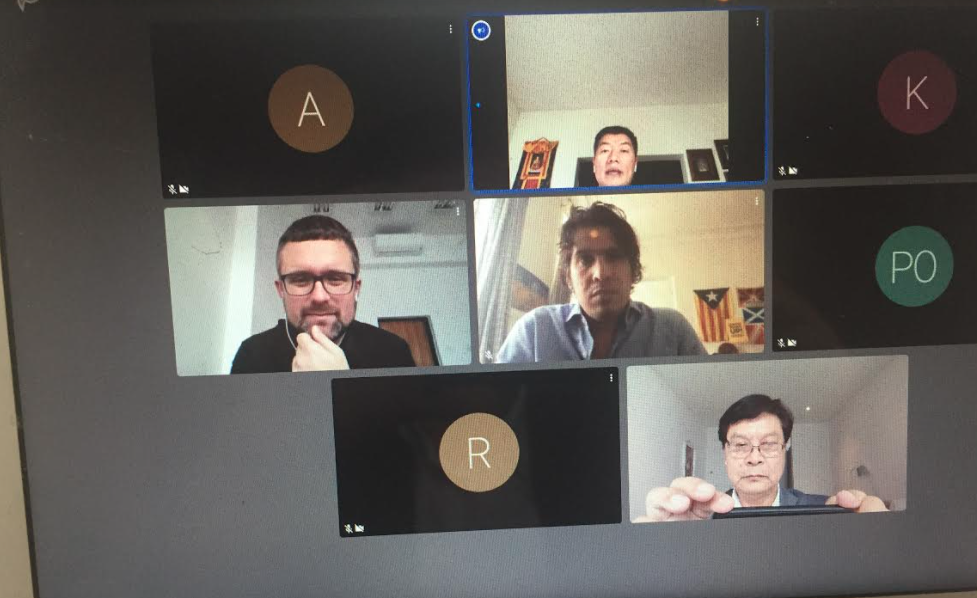 ‘Therefore, the TIG and European countries must bring this up in the Human Rights Council. This issue must be discussed in various hearings within the EU institutions, and also in the plenary session of the European Parliament,’ he urged.

Aleix was enthusiastic about the webinar. With his background of being a friend of Tibet and having been involved with the Office of Tibet, he was supportive of a strong campaign in the EU. Earlier as Assistant to MEP Tremosa, he had gone to Dharamsala in 2018 as a part of MEP’s delegation. He was particularly taken aback with the labour camp report. He vowed that the case could be, indeed must be, brought out in the plenary of the EP. He wanted detailed information on this matter.

Representative Tashi Phuntsok took up with the remarks by Mr Peksa about labour camp in Tibet as modern-day slavery with which he agreed completely. Being politically correct nowadays one uses terms as coerced labour, vocational institutes, or conscript labour. But in fact, it is utterly and simply slavery in every sense, he condemned. Like the slavery in the past, it is intrinsically dictated by the colonial mind – Tibetans being lazy to be made productive, barbarian to be civilised, to be marshalled about without their free will, to be the cog in the supply chain of the colonial power.

He appealed that the TIG conduct webinar regularly, raise the issue of Tibet in the human rights committee, foreign Affairs committee and also in the plenary session of the EP.

More importantly, he said the EU needed to be more forceful to elicit concrete responses from China. Raising human rights issues and individual cases of Tibet without any positive results are unacceptable. Like Chinese people or diplomats are free to travel across Europe, Europeans should be free to travel across China, including regions like Tibet and East Turkestan. Like Chinese Foreign Minister Wang Yi recently travelled to many European countries, Council President Charles Michel should be able to travel to Tibet – as he expressed recently – during the next human rights dialogue with China.

Mr Peksa concluded that forced labour in Tibet is unacceptable and it should be brought to the attention of the EP. President Dr Sangay thanked Mr Peksa for his support again.