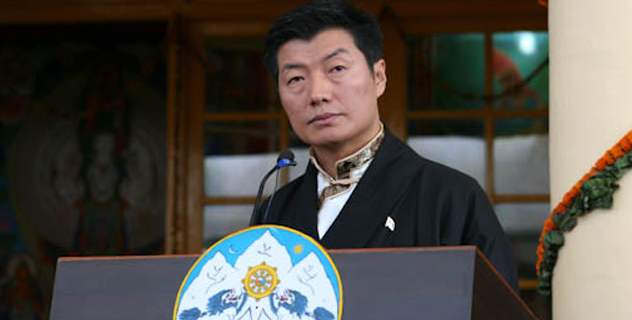 On this joyous occasion of the seventy-eighth birthday of His Holiness the Great Fourteenth Dalai Lama of Tibet, I bow in deepest reverence and pay obeisance on behalf of the Kashag and Tibetans inside and outside Tibet. My colleagues in the Kashag and Tibetans everywhere join millions of admirers across the globe in wishing His Holiness good health and a long life. We offer our prayers and re-affirm our unflinching devotion and loyalty to His Holiness the Dalai Lama – Jetsun Jamphel Ngawang Lobsang Yeshi Tenzin Gyatso Si-Sum Wang-Gyur Tsungpa Me-Pey Dhe Pal-Sangpo Chog. We express our deepest gratitude to His Holiness’ loving parents for blessing us with their precious son, Lhamo Dhondup, born on July 6, 1935 to a peasant family in Taktser village in the Amdo region of Tibet.

His Holiness the Dalai Lama describes himself as a simple Buddhist monk. For Tibetans, he is the human manifestation of Chenrezig – the Bodhisattva of Compassion. His Holiness’ greatness extends beyond Tibet as he advances his vision for a better humanity through the promotion of his three commitments: 1. basic human values or secular ethics in furthering human happiness; 2. inter-religious harmony; and 3. the preservation of Tibet’s peaceful and non-violent Buddhist culture.

His Holiness the Dalai Lama teaches that human beings are the same, all want happiness and no one wants suffering. Just as physical hygiene is essential for a healthy body, a sense of moral hygiene based on warm-heartedness and compassion is equally important. He believes education should instill in children both cognitive and emotional intelligence in order to create synergy and balance between a healthy body and healthy mind. Towards this end, the Central Tibetan Administration will introduce a curriculum on secular moral ethics in Tibetan schools.

As a tireless advocate of inter-religious harmony, His Holiness the Dalai Lama interacts with religious leaders of all faiths and has visited and prayed at numerous mandirs, mosques, churches, synagogues and monasteries.

His Holiness the Dalai Lama has been instrumental in preserving and disseminating the teachings of the Buddha from their repository in Tibet to their origin in India and to 67 other countries across 6 continents.  Buddhist monasteries and cultural institutions destroyed in occupied Tibet have been revived and rebuilt in exile. His Holiness encourages Tibetan scholars and practitioners to categorize the Nalanda tradition of Buddhism into separate fields of religion, philosophy and science.

As a pioneer in promoting intensive dialogue between leading world scientists and Buddhist monks, His Holiness the Dalai Lama has greatly advanced and enriched both modern science and Buddhism. The study of mind, as pursued by Buddhist practitioners, when applied to contemporary scientific fields has resulted in collaborations with major reputed universities such as Harvard, MIT, Stanford, Emory, Wisconsin, Zurich, Delhi University and others.

His Holiness the Dalai Lama is one of the world’s most respected and admired figures. Like Mahatma Gandhi, Nelson Mandela and Mother Teresa, his contribution to the betterment of greater humanity extends far beyond his own religion and time. His enduring contributions are evident from over 150 major awards, prizes and honorary doctorates that have been conferred on him, most notably the Nobel Peace Prize in 1989, United Nations Earth Prize in 1991, US Congressional Gold Medal in 2007 and the Templeton Award in 2012.  The Templeton Award citation acknowledged His Holiness for encouraging “serious scientific investigation and reviews of the power of compassion and its broad potential to address the world’s fundamental problems.”

As His Holiness’ stature on the world stage has grown, so has global awareness and support for Tibet. As one of the world’s most inspirational figures, His Holiness has directly and positively impacted on the image of the Tibetan people and fundamentally benefitted the Tibetan cause.

In His Holiness the Dalai Lama, Tibetans have a leader that no other people has.  Recognized as His Holiness the Dalai Lama at the tender age of five, His Holiness was compelled to take on political responsibilities at age fifteen, to face the occupation of Tibet by the People’s Republic of China, and was exiled to India at twenty-four.  He had to forego all semblance of a normal childhood as the survival of Tibetan identity, hope and the future of an entire civilization rested on his young shoulders. Like a good shepherd leading his flock through an arid area to greener pastures, the young leader single-handedly prevented his people and the Tibet issue from falling into historical oblivion.  His Holiness has been the force unifying the spirit of Tibet’s three provinces (U-Tsang, Kham and Amdo) and four schools of Tibetan Buddhism and the Bon religion. He is the beacon of hope for all Tibetans in Tibet, the majority of whom have never seen him. Our compatriots inside Tibet, including the new generation, express deep loyalty and clearly yearn to be reunited with His Holiness.

As of today, 119 Tibetans have self-immolated in Tibet. Their grief is reflected in the lyrics composed by two young singers, Pema Trinlay and Chakdor, both of whom were imprisoned for their song.

Suffering under Chinese rule is unbearable”

Our compatriots in Tibet, including the self-immolators, clearly expressed their primary aspiration to be the return of His Holiness the Dalai Lama to Tibet and freedom for Tibetans. Tibetans in exile and the diaspora, particularly the new generation, must make the realization of this aspiration a sacred duty. This is the least we owe to the Tibetans inside Tibet. This calls for a thorough understanding of the leadership of His Holiness, his thoughts and vision for Tibet and the Tibetan people.

Tibetan democracy in exile from its infancy to today’s consolidated state is the result of decades of efforts by His Holiness the Dalai Lama. At this critical period of our struggle, Tibetans in exile and diaspora must utilize this democracy and freedom responsibly to show solidarity with and highlight their suffering of Tibetans in Tibet, challenge the hard-line policies of the Chinese government, and unite all Tibetans.

As early as the 1970s, His Holiness the Dalai Lama began consulting various Tibetan leaders and soliciting feedback from Tibetans inside Tibet to formulate a far-sighted and pragmatic solution to the Tibet issue.  The new formulation traversed the middle path between the two extremes of repression and separation – one categorically rejecting the repressive and colonial policies of the Chinese government towards Tibetans while not seeking separation from the People’s Republic of China. This win-win proposition, which came to be known as the Middle Way Approach, calls for genuine autonomy for the Tibetan people within the framework of the People’s Republic of China. This approach was also in sync with then China’s paramount leader Deng Xiaoping’s position that, “except for independence of Tibet all other issues could be discussed and resolved.”

The Middle Way Approach has enabled Dharamsala and Beijing to establish contact through a series of talks held between Chinese representatives and envoys of His Holiness the Dalai Lama. Tibetans inside and outside Tibet were for the first time able to contact and visit one another. Thousands of Tibetan students and monks in Tibet were able to visit India and receive secular and monastic education, which also contributed to the revival of Buddhism inside Tibet and awareness about the Central Tibetan Administration.

The Middle Way Approach is supported by many prominent Tibetans inside Tibet as they view it as a realistic approach to peacefully resolving the issue of Tibet. Furthermore, this approach is also enabling many governments to support a solution-oriented Tibet policy and helps them to raise the Tibet issue in their bilateral dialogue with China. After President Barack Obama’s meeting with His Holiness the Dalai Lama on July 16, 2011, the White House applauded “the Dalai Lama’s commitment to non-violence and dialogue with China and his pursuit of the Middle Way Approach,” and encouraged “direct dialogue to resolve long-standing differences and that a dialogue that produces results would be positive for China and Tibetans.”

Another key area where the Middle Way Approach is steadily bearing results is in the minds of many Chinese people, in particular among the intellectuals. Some of the brightest Chinese intellectual luminaries, including Liu Xiaobo, the imprisoned Nobel Laureate, were signatories of a courageous open letter in 2008 that expressed support for His Holiness the Dalai Lama’s peace initiatives. Since then more than 1,000 articles and opinion pieces have been written by Chinese scholars and writers. These include a report by the Beijing based legal NGO, the Gongmeng Constitutional Initiative, describing the suffering and grievances of the Tibetan people and calling for policy change. Tibetan Buddhism is also drawing a growing number of Chinese practitioners from Mainland China, where it is estimated today there are over 300 million Buddhists. His Holiness the Dalai Lama’s outreach to Chinese students and scholars and his teachings to Chinese Buddhist practitioners are shaping Chinese attitudes towards Tibet and Tibetans.

On the auspicious occasion of His Holiness the Dalai Lama’s 78th birthday, the Central Tibetan Administration reiterates its firm commitment to the Middle Way Approach in resolving the Tibet issue.  Since assuming office in August 2011, we have proceeded with a three-phase approach of consolidation, action and dialogue.

The consolidation phase that spanned much of the first year was important to ensure a smooth transition after His Holiness the Dalai Lama’s historic decision to devolve political authority to a democratically-elected leader. Towards this end, we hosted several major conferences in Dharamsala that brought together Tibetan representatives from all across the globe and leaders of the Indian and International Tibet Support Groups.

The action phase witnessed major solidarity events in several cities including New York, New Delhi, Brussels, Tokyo, Sydney and others. These solidarity events were complemented by media awareness and efforts to garner support for Tibet in Congress and parliaments across the world.  Working with friends and supporters of Tibet, we were able to get resolutions and motions passed in parliaments in the European Union (EU), France, Italy, the United States and others.

The three phases are inter-related, and the dialogue phase will involve continued efforts and initiatives to resume contact with the Chinese government. Additional investment is being made to educate both Tibetan and external audiences on the Middle Way Approach. The Task Force on Negotiations will be enlarged and members will have their 26th meeting in September 2013 during which the recent developments in Tibet and China will be discussed.

I take this opportunity to thank the great people of India and the Indian Government for their unwavering assistance and support to Tibetans. I also thank other governments and our supporters around the world.

Lastly, I offer my fervent prayers for His Holiness the Dalai Lama’s long and healthy life. With unity, innovation and self-reliance as the guiding principles, may all his wishes and the aspirations of Tibetans inside and outside Tibet, and his efforts towards promotion of a more compassionate and peaceful world be fulfilled.