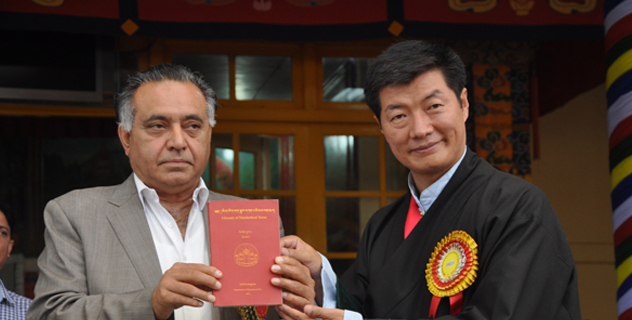 The 14th Kashag is observing 2014 as the “Year of the Great 14th Dalai Lama” to express our boundless appreciation of His Holiness the Dalai Lama’s great accomplishments for the cause of Tibet and the promotion of peace, inter-faith harmony and humane values throughout the world. Under this year-long program, the Central Tibetan Administration (CTA) will organize 21 major events, which include some 300 smaller activities. Looking further ahead, the Kashag will mark His Holiness the Dalai Lama’s 80th birthday by the Tibetan calendar—the fifth day of the fifth Tibetan month, falling on the 21st of June 2015—with an elaborate long life offering to His Holiness the Dalai Lama.

His Holiness the Dalai Lama has kindly agreed to grace the official 79th birthday celebration with his presence at the time that he confers the 33rd Kalachakra Initiation in Ladakh, a region with which Tibetans share deep religious and cultural ties.

The fact that the Tibetan people today are united like an iron ball regardless of their regional or religious affiliations and in spite of the Chinese occupation is mainly due to the enlightened leadership of His Holiness the Dalai Lama. The power of Tibetan people’s unity today is far greater than the recent past and is comparable to those days when the three Dharma kings reigned over Tibet.

In exile, His Holiness the Dalai Lama envisioned a united Tibetan community firmly rooted in both tradition and modernity. He began by laying a strong foundation for the sustenance of Tibetan people as well as the preservation of the Tibetan identity by establishing Tibetan settlements across India, Nepal and Bhutan. At the same time, to ensure that future generations of Tibetans acquire modern education while remaining rooted in traditional values, from the very beginning, he initiated and established separate Tibetan schools. In fact, the present Tibetan leadership is a product of these institutions that have educated Tibetans in exile for the past fifty years.

By also introducing a series of structural and institutional reforms, His Holiness the Dalai Lama’s guidance and wisdom has transformed the nature of exiled Tibetan polity into a genuine democracy. Years of these sustained democratic reforms have in fact transformed the entire exile Tibetan community into a society with deeply rooted democratic values and culture. As a result, even though today exiled Tibetans are scattered across six continents, we have continued to maintain an extremely vibrant, cohesive and organized community. The fact that the exile Tibetan polity and community is today considered a model worthy of emulation is largely because of the visionary leadership of His Holiness the Dalai Lama and the diligent perseverance of our senior generation.

Under His Holiness the Dalai Lama’s leadership, all major monasteries that were destroyed in occupied Tibet were rebuilt in exile to preserve and promote Tibetan religion. These monastic centres of teaching and practice, belonging to all four traditions of Tibetan Buddhism as well as Tibet’s native Bon religion, were not only revived, but also thrived in exile. As these monastic scholars and masters have helped spread Tibetan Buddhism, Tibetan Dharma centres have mushroomed the world over.

Indeed, His Holiness the Dalai Lama has sparked a new awakening among the people of Himalayan regions about their cultural heritage and this has greatly contributed to the revival of local traditions and customs. His Holiness the Dalai Lama remains a fount of guidance and solace for the world’s Buddhists, instrumental in preserving and disseminating the teachings of the Buddha from their repository in Tibet to their origin in India and to 67 other countries across 6 continents.

As a tireless advocate of inter-religious harmony, His Holiness the Dalai Lama interacts with religious leaders of all faiths. He has also pioneered intensive dialogue between leading world scientists and Buddhist monks, and greatly enriched both science and religion. Furthermore, his global efforts to promote secular ethics have earned him the respect and admiration of world citizens regardless of their religious background. These multiple and enduring contributions are evident in over 150 major awards, prizes and honorary doctorates that have been conferred on him, most notably the Nobel Peace Prize in 1989, United Nations Earth Prize in 1991, US Congressional Gold Medal in 2007 and the Templeton Award in 2012. Truly, the sustained international recognition and prestige of His Holiness the Dalai Lama has been the main driving force behind the rising global awareness of and support for the cause of Tibet.

Given His Holiness the Dalai Lama’s influence and prestige, perhaps it is sadly inevitable that some group of people would seek to malign him. In particular, the Dholgyal followers have launched a politically-driven smear campaign against His Holiness the Dalai Lama in the name of religious freedom and human rights. By advocating sectarianism and fanaticism, which would jeopardize the existing harmony and unity among all the traditions of Tibetan Buddhism, the Dholgyal followers have turned into a political tool for the Chinese Communist Party. Considering the larger interest of the Buddha Dharma, and in particular, the threat against the very existence of Tibetans as a people, Tibetans must wisely discern between true and untrue and right from wrong.

On the larger issue of Tibet, we wish to reiterate the Kashag’s belief that this will only be resolved through dialogue with the Chinese government. It is our hope that the new Chinese leadership will soon realize the fact that the Middle Way Approach is a mutually beneficial solution to the Tibet problem.

Despite the suffocating environment of fear and repression inside Tibet for the past 60 years, the Tibetan people have resolutely kept their hope and pride alive. They have placed their aspirations in His Holiness the Dalai Lama and anxiously await his return. This profound desire for His Holiness the Dalai Lama’s return and for freedom in Tibet are the common rallying cries of the 130 people who have committed self-immolation as an act of protest against China’s oppressive rule.  Despite our repeated appeal against drastic actions, the heart-wrenching series of self-immolations witnessed across Tibet has amplified the true aspirations of the Tibetan people not only to the Chinese government, but also to the world at large.

With unity, innovation and self-reliance as our guiding principles, we pledge to fulfill the vision of His Holiness the Dalai Lama and the aspirations of the Tibetans inside Tibet and all the Tibetans who left us, i.e. to restore freedom for Tibet.

Finally, we would like to take this opportunity to convey our heartfelt gratitude to the people and Government of India and Himachal Pradesh, as well as of the world, who have in any way, shape or form supported the cause of Tibet and contributed to the preservation and promotion of Tibetan religion and culture.

In conclusion, we pray that His Holiness the Dalai Lama may live long and all his wishes be fulfilled. May the cause of Tibet soon prevail!