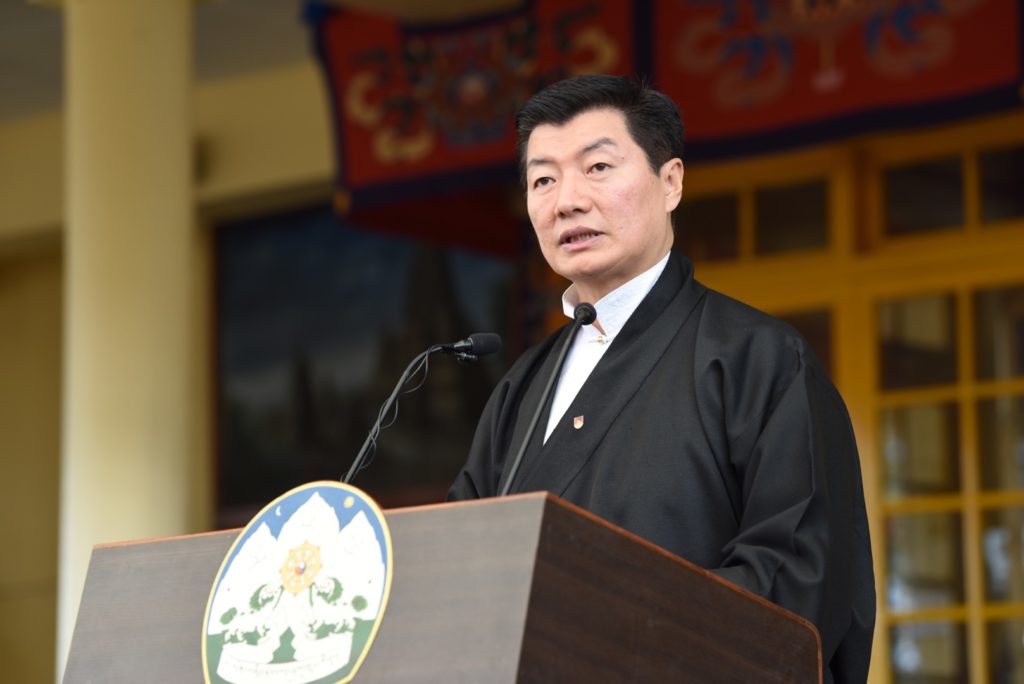 President of the Central Tibetan Administration delivers the statement on the 61st Anniversary of the Tibetan National Uprising Day.

On 10th March 1959, people of Tibet revolted against China’s illegal occupation of a sovereign Tibet. With their fists in the air, Tibetans flooded the streets of Lhasa shouting, “Bhodkyi dhakpo bhodmi yin!” “Tibet belongs to Tibetans!”

His Holiness the 14th Dalai Lama of Tibet describes 10th March 1959 as the “day destined to be the most momentous Lhasa had ever seen,” in his memoir My Land and My People. His Holiness explains, “I felt as if I were standing between two volcanoes, each likely to erupt at any moment. On the one side, there was the vehement, unequivocal, unanimous protest of my people against the Chinese regime, on the other, there was the armed might of a powerful and aggressive occupation force.”

The Chinese responded to the peaceful Tibetan demonstrations with brutal force. The then Indian Counsel General in Lhasa reported that the Chinese People’s Liberation Army unleashed its “artillery mortars, machine guns and all types of automatic weapons” on defenceless Tibetans.

We are here, together, as one people, on the 61st anniversary of that day, to pay our tribute to those brave daughters and sons of Tibet, and to draw inspiration from their sacrifices in our struggle to restore freedom and peace in Tibet. For the last 60 years, Tibetans in Tibet have been steadfast in their struggle against the illegal occupation of Tibet.

What is life today for ordinary Tibetans under Chinese rule? The recent 2020 Freedom House report, for the fifth year in a row, placed Tibet as the second least free region in the world, after Syria. Reporters Without Borders reported Chinese ever-tightening control over the press in its 2019 World Press Freedom Index. The 2020 Human Rights Watch report highlighted the threat to the Tibetan language as China forces politically motivated bilingual education policies in Tibet. These facts of increasing and continuing oppression of Tibetans cannot be separated from their everyday acts of resistance.

Since 2009, 154 Tibetans have self-immolated. The latest being 24-year-old Yonten from Ngaba Meruma Township who passed away after self-immolation on 26th November 2019.

In 2015, Tashi Wangchuk, a Tibetan language activist said in an interview with the New York Times that, “So many Tibetans have self-immolated. I can understand them now because we have very few ways to solve problems.” He was arrested in early 2016 and sentenced to five years in prison for “inciting separatism”. On 27th January this year, nearly a thousand writers, linguists, translators, and language activists signed the open letter issued by the PEN America calling for his immediate release.

This past November, seven Tibetans were arrested for their peaceful protest in Sershul, Eastern Tibet. Following the protest, 30 monks and laypeople were detained on suspicion of possessing ‘pictures of His Holiness the Dalai Lama’.

The Order no 13, issued by the Chinese government in November 2019, aims to sinicize Tibetan Buddhism and put draconian restrictions on religious institutions. Last year, the Chinese government forcibly evicted 7100 monks, nuns and Buddhist practitioners from the Yachen Gar Buddhist Institute amidst its ongoing demolition. Many of the evictees were forced into the so-called “Patriotic Re-education Camp.” The Chinese Communist Party bans even retired Tibetan party cadres from taking part in Buddhist religious activities.

The 3rd session of the so-called 11th Tibetan Autonomous Region’s People’s Congress held in January this year legislated mandatory “ethnic unity.” Set to take effect from 1st May 2020, this law will formally legalize inter-marriages, subsidies for Chinese migrants and other attempts to sinicize the Tibetan identity. Sinicization is the problem, not the solution.

The recent news of a secret agreement signed between Nepal and China during the Chinese President Xi’s visit last year and a similar economic treaty signed between China and Myanmar with the latter recognizing Tibet along with Xinjiang and Taiwan as “inalienable parts of China” are examples of China’s aggressive misuse of its economic clout to advance its political agenda.

That acts of resistance by ordinary Tibetans are examples of a people who seek to protest an unjust powerful colonial rule through the truth of their experience and their courage. The international community’s recognition of the truth of our struggle is crucial. We thank our supporters for continuing to stand with the Tibetan people and we thank international organizations for supporting the truth of our struggle by providing factual albeit alarming reports on Tibet, every year.

In a momentous event, on January 28 this year, the Tibetan Policy and Support Act (HR 4331) was passed with an overwhelming vote in the United States House of Representatives. I, on behalf of all Tibetans, would like to thank Nancy Pelosi, the Speaker of the House of Representative, Co-sponsors Representative James Patrick McGovern (D), Representative Christopher Henry Smith (R) and all the bipartisan Members of Congress who helped and supported the passage of this Act. We hope that the Senate will pass the same Act and thank Co-sponsors Senator Marco Rubio (R) and Senator Ben Cardin (D) for their leadership.

In October 2019, during his official visit to Dharamsala, Ambassador Samuel Brownback, reiterated the United States’ support for His Holiness and the Tibetan people. Ambassador Brownback was one of the highest United States government officials to visit the CTA and Dharamsala. He called on China to immediately release the 11th Panchen Lama who was forcefully abducted and has been missing for the last 25 years. The Ambassador also endorsed the resolution on the reincarnation adopted by the 8th International Conference of Tibet Support Groups, and the 3rd Special General Meeting held last year. The 14th Tibetan Religious Conference also stated that His Holiness the Dalai Lama is the sole authority concerning his reincarnation.

The Dutch and Belgian governments have also stated their positions clearly. The Belgian government has said that it is the Tibetan religious community who will decide about the reincarnation of the Dalai Lama without interference from temporal authorities.

During the Central Tibetan Administration (CTA) led long-life prayer offered to His Holiness by the Tibetans across the globe in May 2019, His Holiness reaffirmed to live for over 110 years. While no amount of words are enough to express our immeasurable gratitude towards His Holiness, we would like to dedicate the year 2020 as the “Thank You, Dalai Lama” year to celebrate His Holiness’ legacy and his four commitments. We welcome Tibetans and friends worldwide to organize activities in your capacities to create awareness about the life and work of His Holiness.

We welcome the recent announcement of the UN High Commissioner for Human Rights, Michelle Bachelet’s decision to visit Xinjiang this year. However, we strongly urge her to visit Tibet and press China for unfettered access in order to monitor the deteriorating human rights conditions in Tibet.

Under the enlightened leadership of His Holiness and the CTA, Tibetans in South Asia are recognized as one of the world’s most successful and effective refugee communities. If the Chinese government harbours any hope that the Tibet issue will gradually lose its momentum, we would like to send a clear message that we will persist. The indomitable courage of Tibetans inside Tibet will continue to inspire those of us in exile to strengthen our commitment. Peace in Tibet can be only restored through the Middle Way Approach. Therefore, the Chinese government must resume dialogue with the envoys of His Holiness the Dalai Lama.

Representing the true spirit of unity of the three provinces of Tibet, Tibetans in exile are collectively striving to realize the aspirations of Tibetans inside Tibet. Those of us who live in freedom have the responsibility to safeguard the larger interest of our people and to lead the Tibetan cause forward.

The current COVID-19 epidemic is a global public health emergency and encourage everyone to take precautionary measures. We offer our prayers in solidarity to all those countries and individuals affected by this epidemic. Inside Tibet, it is suspected that there are more than 100 coronavirus cases. However, due to the lack of freedom of speech and transparency in China, we are unable to get actual confirmation. We express our deepest sympathy to Tibetans inflicted by this outbreak and pray that the coronavirus is contained.

The Kashag would like to take this opportunity to offer our deep appreciation to the great nation and people of India, the governments, the Parliaments, the Tibet Support Groups across the world, individuals and organizations who support the just cause of Tibet and stand in solidarity with the Tibetan people in this critical time. I would like to thank the Members of European Parliament for establishing a Tibet Interest Group at the recently elected European Parliament. I urge all of you to be with us till the day human rights and justice prevail in Tibet.

All Tibetans, wherever we may be today, understand the significance of 10th March 1959. It marks the beginning of a struggle initiated by ordinary Tibetans in Tibet. Those of us who live in exile carve their words in our hearts and commit to making the day a reality when all Tibetans will be together and free in Tibet.

Finally, I offer my earnest prayers for a healthy and long life of our most revered leader, His Holiness the Great 14th Dalai Lama. In March 1959, he was forced to flee under extremely difficult circumstances. I pray that His Holiness will soon return home.

Note: This is a translation of the Tibetan statement. Should any discrepancies arise, the Tibetan version is to serve as final and authoritative.