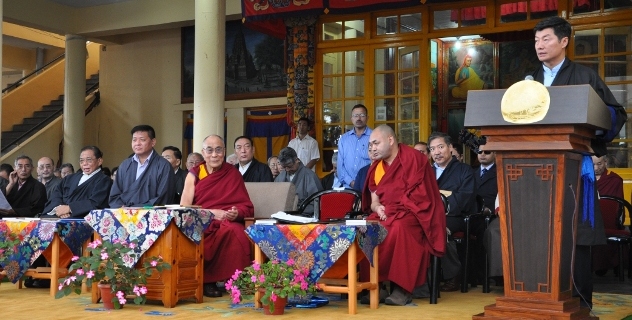 On the 52nd anniversary of Tibetan Democracy Day, I would like to pay the Kashag’s and my personal obeisance to His Holiness the Dalai Lama and extend heartfelt greetings to fellow Tibetans in Tibet and in exile.

Today is a proud day for all Tibetans. It is the day when Tibetan exiles have fully realized His Holiness the Dalai Lama’s cherished wish to transform the Tibetan polity into a vibrant democracy. Since the age of 16, His Holiness the Dalai Lama has taken steps to introduce and consolidate Tibetan democracy. This precious gift of democracy will be treasured by all Tibetans in the same way we have treasured and embraced Buddhism for over 1300 years. As Buddhism offers liberation from suffering, democracy will provide the Tibetan people the means to attain freedom from injustice.

We can take pride in the fact that Tibetans in exile have proven that Buddhism is compatible with democracy. It is also established that all the major religious traditions, from Hinduism to Judaism, from Christianity to Shintoism are compatible with democracy. The Arab Spring has shown that Islam and democracy are not in conflict. The question arises whether Confucianism too can embrace democracy. Vibrant democracies of Taiwan and South Korea for instance prove that Confucianism and democracy are also compatible. Democracy therefore is neither cultural specific nor developmental specific but universal.

Soon after coming into exile in 1959, His Holiness the Dalai Lama called for Tibetan parliamentary elections. It was on this day in September 1960, that the first Tibetan Parliament was inaugurated. As early as 1963, our leaders adopted the first democratic constitution of Tibet, which even included a provision allowing for the impeachment of His Holiness the Dalai Lama. Women’s representation was included as early as 1963, and representation of the Bon religious tradition in 1977.

In 1991, the Charter of the Tibetans in Exile was adopted and the Parliament expanded and constitutionally empowered to elect the Kashag. The Tibetan Supreme Justice Commission, formed in 1992, completed the creation of three separate pillars of democracy. In 2001, when the first-ever direct election of the Kalon Tripa took place, His Holiness the Dalai Lama declared himself as semi-retired. Then in March of last year, despite persistent appeal by Tibetans from around the world, His Holiness the Dalai Lama devolved all his political authority to the elected leader, declaring the fulfillment of his “long-cherished goal” of bringing democracy to the Tibetan people.

Leaders around the world recognize the accomplishment of the Tibetan exiles as we institute a fully representative form of governance. In my travels as Kalon Tripa, I have had the privilege of meeting with Nobel laureates, former presidents and prime ministers, speakers of the U.S. Congress and the Australian Parliament, and other leaders of more than a dozen countries. In the international media, as well as Indian and overseas Chinese media, the 2011 Tibetan election was recognized as genuine, credible, and reflective of the universality of democracy.

The recognition given by both global leaders and the media has enhanced the legitimacy of the elected leader of the Central Tibetan Administration. Equally important, it has strengthened the ability of the Tibetan people to carry on their struggle until justice is done and freedom restored.

As we commemorate this important anniversary, our thoughts remain with our brothers and sisters in Tibet aspiring for freedom and the return of His Holiness the Dalai Lama to his homeland. Under the continued occupation and oppressive polices of the Chinese government, 51 Tibetans have set themselves on fire. Sadly, 41 have died. The Kashag and the Tibetan Parliament will be convening the Second Special General Meeting of Tibetans in Dharamsala from September 25–28. Its primary agenda will be to discuss ways and means to address the urgent and critical situation in Tibet.

To understand the self-immolations, it is crucial to know that no space exists in Tibet for freedom of speech and other conventional forms of protest. A participant in a simple demonstration could face arrest, torture and even death. These conditions help explain the terribly high number of self-immolations in Tibet. It is a tragic irony that His Holiness the Dalai Lama is accessible to millions of people around the world, but not to his own people calling out for him in Tibet.

The Central Tibetan Administration has made consistent and repeated appeals to refrain from the drastic acts of self-immolation. Still Tibetans continue to commit this form of protest – and we in the Tibetan Administration recognize our sacred duty to make the protesters’ cries heard around the globe to all who believe in justice. Tibetans around the world offer our prayers to those Tibetans who have succumbed to self-immolation and express solidarity with the arrested, tortured and imprisoned, including all the Tibetans in Tibet who live under repressive rule.

The Kashag welcomes statements of concern from the international community. Parliamentarians from around the world, including the U.S., South Africa, Great Britain, Japan, Australia and various countries of Europe, have expressed support.  We welcome the recent letter by two U.S. Congressmen urging the current U.S. Administration to undertake stronger, more coordinated and visible international diplomatic efforts to address the crisis in Tibet. Specifically, they encouraged the U.S. to host an international conference on the issue of Tibet, and establish a Contact Group among U.S. partner nations at the United Nations as an effective means of expressing support to Tibet.

We commend the European Union’s first-time appointment of a EU Special Representative for Human Rights. This is a significant step to advance human rights and address the human rights violations in Tibet.

The Kashag also welcomes the work of Chinese writers and analysts within China and outside, expressing their support for the Middle-Way Policy. Since the 2008 protests in Tibet, they have published thousands of articles that urge the Chinese Communist leadership to resolve the Tibetan issue through dialogue. Many Chinese writers and intellectuals point to the Chinese government and its policies as the cause of the self-immolations and the growing resentment of the Tibetan people. As world famous artist Ai Weiwei recently said, “Tibetan people are burning themselves to death. Already over 40 of them in the past two years, and nobody’s talking about it. I would feel ashamed to go to Lhasa (Capital city of Tibet).”

While we appreciate the statement of concerns and other steps being taken by various governments and the international community, we believe that concrete action is needed to help stop the tragedy in Tibet.

Today, I would like to take this occasion to reiterate the Kashag’s firm commitment to the Middle-Way Policy and to dialogue to peacefully resolve the issue of Tibet. For Dharamsala and Beijing, this is a win-win proposition. Here we also welcome the U.S. Secretary of State Hillary Clinton’s recent call on the Chinese government to resume serious dialogue with the Tibetan leadership. To continue the dialogue process, the Tibetan Task Force on Negotiations will meet in December 2012 after the new Chinese leadership has assumed office.

The Tibetan spirit and their quest for freedom cannot be crushed by China’s military might. In a recent interview, His Holiness the Dalai Lama said “using force for 60 years completely failed” and its revolutionary leader Mao Zedong’s idea that power came from the barrel of a gun was “outdated”. If China seeks to become a global power, then the rights of the Tibetans must be respected. China must also respect the aspiration of its own people and release all political prisoners, including Nobel Peace Prize winner and author of Charter 08, Mr. Liu Xiaobo.

Today, on this 52nd anniversary of Tibetan Democracy, the Kashag would also like to express its gratitude to the government and people of India for many years of generosity and hospitality.

We extend our deep appreciation to friends around the world for their support and active participation in highlighting and advancing the cause of Tibet. In November, International Tibet Support Groups will be organising a special meeting to discuss the critical situation in Tibet and further enhance the international support for the Tibetan cause.

Finally, to my fellow Tibetans, this is the time for unity and solidarity as expressed through the prayers, songs and last wishes of the self-immolators. We must remain vigilant to counter the hard line Chinese leaders’ efforts to undermine the Tibetan cause. We have laid a solid foundation that will only grow stronger if we follow the three guiding principles of unity, innovation and self-reliance. Tibetans are fortunate to be the beneficiary of His Holiness the Dalai Lama’s vision of a democratic Tibetan polity. His unceasing efforts to bring us to this moment have helped to unleash Tibetans’ dynamic energy and empowered them to determine their own future.

We pray for the long and healthy life of His Holiness the Dalai Lama. May the aspirations of all Tibetans within and outside Tibet, be fulfilled.