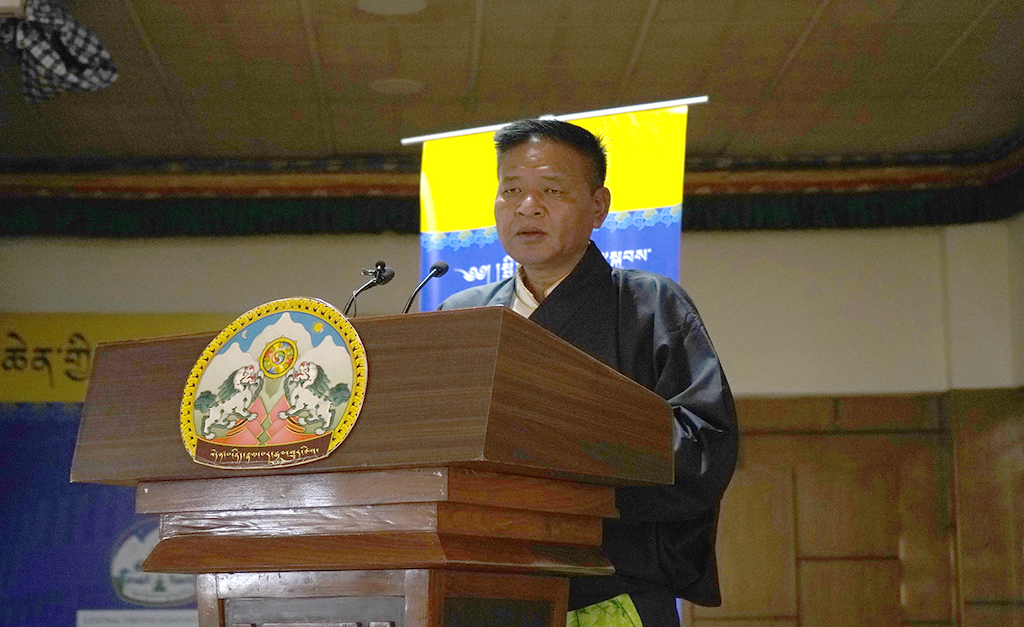 Sikyong Penpa Tsering delivering the official statement of the Kashag on the 86th birthday of His Holiness the Dalai Lama. Photo/Tenzin Phende/DIIR

Dharamshala: His Holiness the Great 14th Dalai Lama, was born at Taktser, a small hamlet in Amdo Province’s Kumbum region on 6 July 1935 to Choekyong Tsering and Dickyi Tsering. Raised under the protection of Palden Lhamo, Lhamo Dhondub was recognized as the undisputed reincarnation of the Great 13th Dalai Lama and brought to Lhasa at the age of five to be enthroned in the Potala Palace. While undergoing his monastic studies, the Chinese government began illegally invading Tibet’s Kham and Amdo regions.  In 1950, the Tibetan troops stationed at Chamdo suffered defeat under the marauding Chinese army. As a result of the invasion, the Tibetan political administration, economy, and the general Tibetan society underwent a severe crisis, like an oil-exhausted lamp flickering in its last dying flame. At such a critical period in Tibet’s history, His Holiness the Dalai Lama, at the tender age of sixteen, was compelled by circumstances to shoulder the spiritual and temporal leadership of Tibet.

In 1951, under threats of further Chinese military invasion, the seventeen-point agreement was thrust upon the Tibetan people. However, His Holiness the Dalai Lama’s efforts to initiate reforms in Tibet was curtailed by the Chinese government.

After coming into exile, most Tibetans initially worked as road construction laborers in India. Despite the enormous hardships of food, clothing and shelter in the early days of exile, under the vision and guidance of His Holiness the Dalai Lama, gradually established Tibetan settlements, schools and monasteries on the land leased by the Indian government. These institutions now serve as the custodian of Tibetan national identity. In 1960, His Holiness the Dalai Lama brought about major democratic reform in the Gaden Phodrang government by instituting the first Tibetan parliament composed of representatives from all three provinces and religious schools of Tibet. This laid the foundation of the nascent Tibetan democracy in exile, and it was done with the foresight to empower the Tibetan public to perform its own political and administrative functions in the long run.

In 1959, 1961 and 1965, consequent to emphatic international lobbying on Tibet, the United Nations General Assembly passed three resolutions on Tibet. In 1963, His Holiness made a proclamation of the Constitution for a Future Tibet. In 1967, in the heat of China’s devastating Cultural Revolution, His Holiness embarked on his first international visit from exile to Thailand and Japan. In 1974, following a visit to Europe in 1973, His Holiness discussed with the then exiled Tibetan leadership to explore ways to resolve the Sino-Tibetan conflict through dialogue based on the Middle Way Approach. In 1979, while His Holiness was on a visit to the US, China was going through a brief respite from the political turmoil of the past due to a series of liberal reforms. Coinciding with these liberal reforms, Deng Xiaoping expressed a desire to negotiate and the first Sino-Tibetan contact was established after a gap of twenty years. This renewed Sino-Tibetan contact led to several exploratory talks and fact-finding missions to Tibet. It also allowed the reunion of Tibetans inside and outside Tibet which enhanced the restoration of Tibetan monasteries and reinvigoration of the monastic community which had been undermined by the Cultural Revolution. It also led to a brief period of the revival of Tibetan Buddhism, Tibetan language education, and Tibetan arts, culture and tradition. All these are a clear outcome of the passionate efforts initiated by the 10th Panchen Lama Choekyi Gyaltsen as well as other Tibetan spiritual leaders, scholars, and the general Tibetan public.

As a result of the Five Point Peace Plan and the Strasbourg Proposal made by His Holiness the Dalai Lama at the US Congress in 1987 and the European Parliament in 1988 respectively, and his firm commitment to resolve the Tibet issue through the mutually beneficial Middle Way Approach, His Holiness garnered immense international respect and recognition. For these efforts, His Holiness the Dalai Lama was also awarded the Nobel Peace Prize which heralded an upsurge in international support for Tibet. The year 1991 was also marked as the International Year of Tibet, and in 1997 a special coordinator for Tibetan issues was appointed in the US state department. In 2002, the Tibetan Policy Act was adopted by the US government. Two years earlier, a resolution on the Sino-Tibetan dialogue was passed in the European Parliament on the birthday of His Holiness the Dalai Lama. Various other democratic nations along with their government and public have expressed strong support and solidarity with the Tibet issue. The singular reason that the Tibet issue has been able to stay alive throughout the world is because of His Holiness the Dalai Lama’s deep commitment and promotion of universal moral values.

His Holiness the Dalai Lama is an international advocate of world peace, and a stalwart of morality, and inter-faith harmony. His Holiness is also deeply committed to the Tibet issue particularly the preservation of Tibetan culture and religion and conservation of Tibet’s environment. As part of his four main commitments in life including the revival of ancient Indian knowledge such as epistemology, philosophy, meditation and secular ethics, His Holiness has travelled across 60 countries on 300 different occasions and have met over 490 world leaders including presidents, prime ministers, chief ministers, judges, leaders of political parties, and spiritual leaders of different religious traditions. His Holiness has also delivered speeches at over 60 renowned universities and research institutes and has received over 140 awards including 50 honorary degrees in the US alone. His Holiness the Dalai Lama is also the recipient of over 150 global awards including the Nobel Peace Prize, UN Environment Award, US Congressional Gold Medal, John Templeton Award, etc.

The deep-rooted harmony and unity between spiritual leaders of the various schools of Tibetan Buddhism, and the strong belief in Tibetan national identity among the Tibetan people is also unprecedented since the disintegration of the Tibetan empire. This is a testament to His Holiness the Dalai Lama’s visionary leadership of Tibet.

The level of education and economic condition of the exile Tibetan community has also improved considerably since the early days of exile. Tibetans are now relatively self-sufficient. This is also a fruit of His Holiness the Dalai Lama’s 60 years of hard work and fund-raising efforts that was done either directly or through the Central Tibetan Administration with countries like India and the US as well as with international aid groups. The Tibetan people must not only realize but also remember the benevolence of His Holiness the Dalai Lama. However, a few misguided individuals, instead of expressing gratitude, resorts to the baseless denigration of His Holiness the Dalai Lama. As expressed many times earlier, we shall resolutely face these challenges firmly and effectively. Fervent prayers will also be offered to the two-state oracles and the virtuous Tibetan protector deities to peacefully combat these bad deeds and aspirations.

For over 60 years, His Holiness the Dalai Lama has made tireless efforts through the four phases of democratic evolution to establish the Administration, represented by members of the three provinces and the different Tibetan religious traditions. Since this administration is for the benefit of all the provinces and religious traditions, for an effective and efficient administration, we need a system of governance that is based on rule of law rather than the individual. Rule of law is the first prerequisite to foster a just and equitable society. Deviating from this commitment by delaying or compromising will not only go against the basic tenets of democracy but also against meaningful democracy. When we face disagreements on political positions and ideas, we should find solutions from the provisions of the Tibetan Charter. The Tibetan charter is the lifeline of Tibetan democracy without which there cannot be equality and justice, neither can such a democracy sustain itself in the long run. Therefore, I urge everyone to pay serious attention to these issues.

When it comes to our struggle, we must recognize our common opponent and work towards resolving our differences by engaging in constructive discussion. Our consolidated efforts should be directed towards fulfilling our common goals which is the mandatory and historic responsibility of the exile Tibetan people. The exile Tibetan community is an outcome of political circumstances and not economic conditions. We are a people with the responsibility to fight for our cause and not merely to make a living. Consolidating our united effort is the fundamental basis to strengthen the Tibetan political movement. Under whatever circumstances or conditions, we cannot remain entangled in past mistakes and should move forward and not backwards, based on legal provisions.

The Kashag, on its part, will perform its functions of fulfilling its objectives with deep-rooted conviction and faith in the Tibetan charter and the principle of check and balance amongst the three pillars of democracy.

In conclusion, may His Holiness live for aeons. As per the aspirations of the living and will of the dying, may His Holiness the Dalai Lama be able to visit Tibet as soon as possible. May the Sino-Tibet conflict be resolved as early as possible, which will pave the way for the Tibetans inside and outside Tibet to reunite at the earliest.