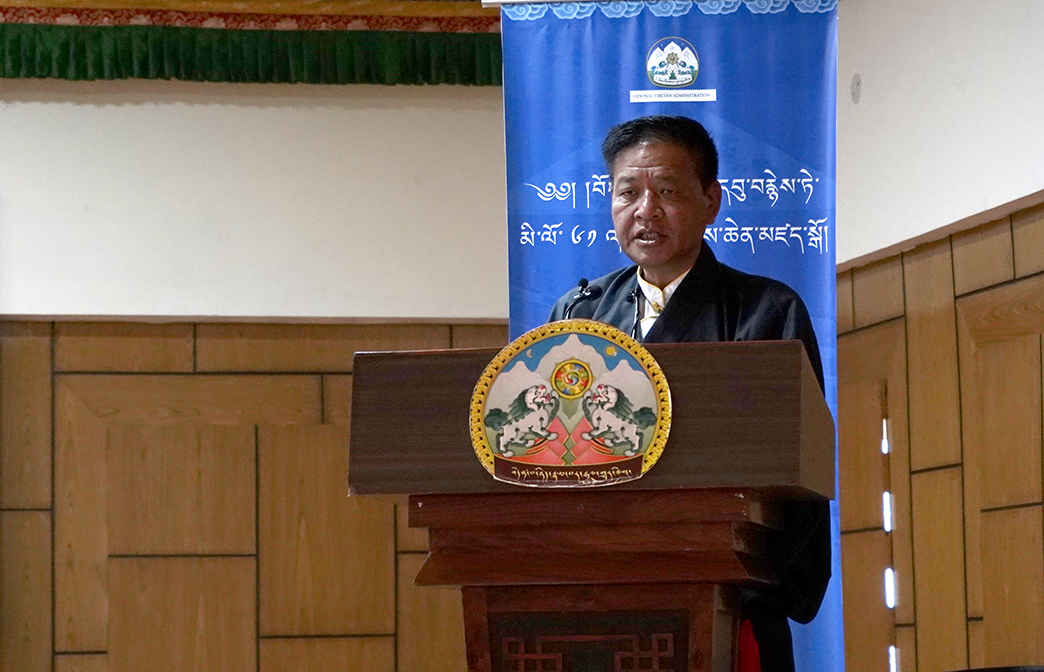 Today, we are gathered here to commemorate the sixty-first founding anniversary of the Tibetan Parliament in 1960 following the arrival of His Holiness the Dalai Lama and 80,000 Tibetans in exile.

On 3 February 1960, barely ten months after arriving in exile, the representatives of Tibetans in exile gathered for the first time in India’s sacred land of Bodhgaya and took Na-gyen Chenmo (great oath) pledging utmost dedication and sacrifice to forge unity and cooperation under the guidance of His Holiness the Dalai Lama. His Holiness said, “Unlike the past system in Tibet, it is extremely important to establish a democratic form of governance based on harmonious blend of spiritual and political values. Hence, a popularly elected body of people’s representatives is needed. After you return to your respective places, select from the general public nominees who are educated, capable, patriotic and trustworthy. For the time being, elect one representative from the four schools of Tibetan Buddhism and three representatives from the three traditional provinces.” Accordingly, elections were duly held and 13 representatives were elected and thus began the first Commission of the Tibetan People’s Deputies. They took their oath on 2 September 1960. In 1975, the Kashag declared to commemorate 2 September as the founding day of Tibetan democracy.

In the challenging environment faced on arrival in exile, His Holiness took the bold step of instituting the election of people’s representatives and making structural reforms in the exile Tibetan polity to encourage and steer it towards genuine democracy and rule of law. Because of far-reaching vision of His Holiness, today the Tibetan administration in exile represents all the Tibetan religious faiths, and has jurisdiction not only over areas administered by the Gaden Phodrang government but also the whole of Tibet’s three traditional provinces of U-tsang, Kham and Amdo. The unprecedented consciousness among the Tibetans in exile of belonging to a single Tibetan nationality could also be considered as a fruit of His Holiness the Dalai Lama’s democratisation efforts.

Furthermore, on 10 October 1961, a draft Constitution for Future Tibet was announced followed by the promulgation of the Constitution on 10 March 1963. It paved way for the formation of three pillars of democracy, and creation of fundamental rights and responsibilities of the people. Moreover, to have genuine democracy His Holiness even provided a clause in the constitution allowing for his own impeachment. Similarly, the use of hereditary titles and prerogatives in Tibet were withdrawn.

During that time, the Chinese government pursued its policy of brutal suppression of Tibetan people’s peaceful protests and thrust upon them its so-called democratic reform. How China’s policies brought tragedy in Tibet as it literally experienced hell on earth is evident in the 10th Panchen Lama Choekyi Gyaltsen’s 70,000-character petition to the Chinese government. As a result, the Panchen Lama was sentenced to 14 years in prison and he had to suffer far more cruel treatment during the Cultural Revolution.

Along with establishment of the Tibetan Parliament, the system of six monthly work meeting of the Kashag, Parliament, civil servants and heads of the institutions were started, and till 1969, 17 such meetings were organised. In 1969 it was decided to call an Annual General Meeting. Till 1989, 16 annual general meetings were held with the participation of almost entire section of the local communities. These meetings made significant contribution during the course of the Tibetan democracy. As per His Holiness’s advice, the election of Garthue (local deputies) began from 1964. In 1965, His Holiness also advised that the Tibetan people should elect their settlement officers. In 1972, Tibetans from Varanasi spearheaded an initiative to seek public support for the administration and consequently Tibetan Freedom Movement Subcommittee was set up in Tibetan settlements.

It is not that the process of democratization in exile was carried out unimpeded. It is needless to say that the establishment of democratic governance had negatively affected the interest of those in power to cling to the old system. And those who lack understanding of democracy created various obstacles to the progress of democracy. However, because of his unwavering commitment to follow the democratic system, His Holiness succeeded in smoothly carrying out the reforms in accordance with the changing times.

Since 1974, the Tibetan Youth Congress proposed that the deputies to the Assembly be elected by the combined electorate of the people of all the three provinces. The high-level Standing Committee of the Assembly accepted the proposal and amended the rules. However, during the election of 8th ATPD in 1982, the deputies from Dotoe province and Nyingma school resigned during the primary round and entrusted His Holiness to appoint all the deputies. His Holiness was entrusted to appoint the deputies of the 9th Assembly due to the refusal of Dotoe province to take part in the election. Due to lack of required nominee from Dotoe and Nyingma in the primary election of the 10th Assembly, the high-level Standing Committee was compelled to pass a resolution, calling for the previous Assembly members to continue as the new members.

Similarly, since early 1977, His Holiness advised the Kashag and Standing Committee to make necessary improvements in the appointment of head of the Kashag, election of Kalons and the setting of their term limits. During the 16th National General Assembly held in 1989, His Holiness emphasised the need for more democratic reforms including election of a head of the CTA. However, the Tibetan leaders and people could not come up with a common action plan to act as per His Holiness’s advice.

His Holiness dissolved the Kashag and Parliament in 1990, and in May convened a special conference with 369 participants from members of the Parliament, CTA, former Kalons, representatives of NGOs and institutes, and religious schools and recently arrived Tibetans from Tibet. During the conference His Holiness appointed the Constitution Review Committee. On 14 June 1991, the 11th Tibetan Parliament adopted the Charter bearing the hallmark of democracy, i.e., the three pillars of democracy and autonomous bodies. In order to further the process of democratization, the system of direct election of Kalon Tripa was started in 2001 and His Holiness took semi-retired position. The most significant democratic development took place in 2011 with the devolution of His Holiness’s political authority to the democratically-elected leader of the Central Tibetan Administration through the 25th amendment of the charter.

The essence of democracy is encapsulated by former US president Abraham Lincoln who said democracy is of the people, by the people and for the people. It should be guaranteed by the rule of law and the constitution on which all the laws are based to ensure that the workings of the government should be within the ambit of the laws and that fundamental rights of the people are not affected. The constitution reflects the aspirations of the people, and those in authority are forbidden to act in contravention of it and manipulate the constitution. For this reason the new Kashag declared that the rule of law is the essence of its commitment to equality and justice.
Democracy is the most important resource to keep alive our freedom struggle and combine our capabilities. When Tibet regains its freedom, democracy is indispensable for its political, economic and cultural development.

Today, as we commemorate the 61st democracy day, we extend our heartfelt greetings to our compatriots in Tibet. No matter how much China’s propaganda machinery make false claims of development during the 70 years of so-called peaceful liberation of Tibet in its recent White Papers, Tibetans inside Tibet have maintained indomitable courage and determination in the face of China’s continued policy to exterminate the Tibetan identity, and they have been making all round efforts to protect Tibet’s religion, culture, language and tradition, for which we remain deeply grateful. It is this strength that unites the Tibetans in exile and keeps alive the freedom struggle. It is the common wish in our heart to reunite in Tibet and we would like to appeal to our brethren in Tibet not to lose their determination.

The present Kashag has been carrying out its administrative works without any negligence. However, the inability of the parliament to convene its session has been preventing it from carrying out its legislative functions. The parliament is also not able to make use of the opportunities to plan activities and campaigns in accordance with the changing situation in China and the international community. The Kashag has been informed of several instances of the Chinese government exploiting this issue to spread falsehood inside Tibet, create division in the exile Tibetan community and misuse it at the international platforms. It has created great concern and apprehension among the governments, parliaments and Tibet supporters who genuinely support us. Tibetans inside Tibet said they would stop their activities for the Tibetan cause if the problem is not resolved immediately. As all of us know that there are people in our small community who are just venting emotions without careful thinking.

The present Kashag will extend its cooperation and support to any means that are within the Charter. We would like to stress that it is high time that the concerned people should seriously weigh the advantages and disadvantages if the situation lingers on, and make no mistake in their consideration by taking responsibility in the highest interest of our cause. If the impasse drags on due to their intransigence, it will only lead to the collapse of Tibetan administration. Neither will any Tibetan like to see such a result, nor will it benefit any Tibetan. The Kashag is ready and firmly committed to work with the parliament as mandated by the Charter and make concerted efforts in working towards the greater cause of Tibet and welfare of the Tibetan people.

In conclusion, the Kashag extends its warm greetings to India, the United States and all the countries and Tibet Support Groups around the world for supporting the just cause of Tibet. We pray for the flourishing of the meritorious works of His Holiness the Dalai Lama and the spontaneous fulfillment of all his wishes. May Tibetan democracy continue to flourish.

N.B. Translated from the original in Tibetan. In case of any discrepancies, treat the original Tibetan as final and authoritative