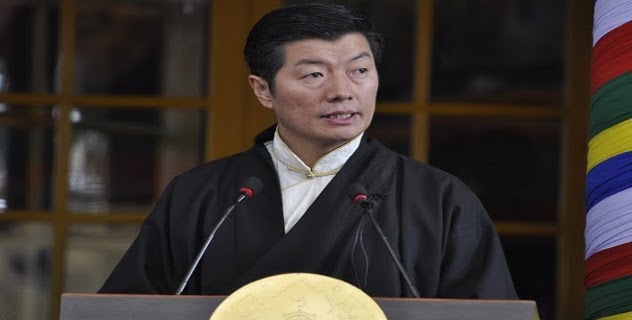 On behalf of 6 million Tibetans, the Kashag pays its most humble respects and deep reverence to His Holiness the Great 14th Dalai Lama.

Kashag also extends its warmest greetings to fellow Tibetans, friends and well-wishers around the world.

Today is the Silver Jubilee of the momentous occasion of the conferment of the Nobel Peace Prize on His Holiness the 14th Dalai Lama. Back in 1989, the Nobel Committee’s citation read: The Committee wants to emphasize the fact that the Dalai Lama, in his struggle for the liberation of Tibet, has consistently opposed the use of violence. He has instead advocated peaceful solutions based upon tolerance and mutual respect in order to preserve the historical and
cultural heritage of his people.

Over the past twenty-five years, His Holiness the Dalai Lama has unwaveringly continued to confirm and strengthen the ideals of the Nobel Peace Prize. His Holiness, who regards himself a simple Buddhist monk, continues to prove himself to be a shining beacon of peace, non-violence and compassion to millions of people across the world. Through the decades, His Holiness has relentlessly endeavoured to achieve his three commitments: promotion of basic human values, inter-religious harmony, and preservation of Tibet’s peaceful and non-violent Buddhist culture.

His Holiness the Dalai Lama has travelled the five continents, meeting presidents, prime ministers, religious heads, kings, scientists, academics, youths, ordinary citizens, the poor and the underprivileged. He has been lauded with 151 major awards and honours. Even fellow Nobel Peace Laureates refer to him as a “Super Laureate”.

His Holiness the Dalai Lama’s unswerving pursuit of a non-violent resolution to the issue of Tibet, based on dialogue and mutual benefit, has dramatically advanced the cause. Global citizens of conscience for Tibet have grown from a handful of small groups to a strong international campaign for human rights for Tibetans, including support through the production of a multitude of Page 1 of 5 documentaries about the Tibetan struggle, and also Hollywood films, as well as
in books and worldwide media coverage.

His Holiness the Dalai Lama promotes a mutually beneficial solution for the problem of Tibet, which takes into account the prevailing international environment and China’s domestic position and with the full mandate of the Tibetan people. With the adoption of the Middle-Way Approach, more than 20 contacts and consultations were made with the Chinese government from 1979 till formal contacts came to an end in 1993. When talks resumed in 2002, nine formal rounds of dialogue and one informal consultation were held between the envoys of His Holiness the Dalai Lama and the concerned PRC officials. The Memorandum on Genuine Autonomy for the Tibetan People sought genuine autonomy within the framework of the Chinese Constitution.

The Middle Way approach has enabled open support from governments and parliaments across the world. Many Chinese scholars and academics have also conveyed their support for the just cause of Tibet. Their interest in and understanding of the Tibetan cause increases by the day. The Central Tibetan Administration remains steadfastly committed to the Middle Way Approach. A meeting of Task Force on negotiation will be held shortly.

One of His Holiness the Dalai Lama’s greatest contributions to and legacies for the Tibetan people has been in building the institution of democracy in exile. Even against the will of many of his people, he successfully implemented democratization of Tibetans-in-exile because of his conviction that ensuring Tibetans a say in their governance is in their best interest. Over the past 25 years, major milestones along this road have included the election of the Kalons
by the parliament in 1990, the adoption of the Charter of the Tibetans in Exile in 1991, the first direct election for Kalon Tripa in 2001, and most recently in 2011, the devolution of all political authority by His Holiness the Dalai Lama to the directly elected leader. Under His Holiness’ visionary leadership, the Central Tibetan Administration has come to thrive and evolve into a self-sustaining institution with the democratic mandate of its people.

To celebrate the Silver Jubilee of the Nobel Peace Prize, the Central Tibetan Administration organized an event on October 2nd, 2014 in Dharamsala to coincide with the birthday of Mahatma Gandhi. Fellow Nobel Peace Laureates Shirin Ebadi and Jodi Williams also graced this special event.

The Nobel Peace Prize has been awarded to individuals as well as organizations. The efforts of the following Laureates,
● Mairead Corrigan and Betty Williams’ led to the Good Friday Agreement, and paved the way for cooperation between the British and Irish governments.
● Desmond Tutu, Nelson Mandela and Frederik Willem de Klerk, have brought racial equality to South Africa.
● Aung Sang Suu Kyi was released from house arrest and freed to pursue democracy in her native Burma.
● Jose Ramos-Horta and Carlos Filipe Ximenes Belo of East Timor have actualized their aspiration for a free East Timor.

Today is also International Human Rights Day, commemorating the United Nations’ 1948 adoption of the Universal Declaration of Human Rights (UDHR) as the common standard to measure the freedoms by which all peoples and nations should live. Unfortunately, even 66 years after the proclamation, Tibetans have very little to celebrate. Instead, China consistently negates the provisions of the declaration, and human rights standards in Tibet continue to deteriorate. Tibet is still under occupation and the Tibetan people suffer political repression, economic marginalization, social discrimination, environmental destruction and cultural assimilation.

Countless demonstrations in Tibet since the Tibetan National Uprising of 1959 have called for human rights and basic freedoms for Tibetans. It is worth noting that, in 2008, the demonstrations spread to all regions where Tibetans reside in the three traditional Tibetan provinces, indicating that all Tibetans are united and share the same aspirations. It showed, too, the relevance of His Holiness the Dalai Lama’s aim to bring all the Tibetans under a single autonomous
administration.

The 132 self-immolations also include Tibetans of all ages and walks of life on the Tibetan plateau. On November 14th this year, an anonymous testimony by the survivor of a self-immolation protest reads: “Compared to other countries,
we don’t have freedom of religious belief, freedom of speech, and our spiritual leader cannot return home. The restrictions are ongoing. I was unable to bear the suffering of living under Chinese aggression, so I thought about a self-immolation protest.”

Today, we pray for those who have sacrificed their lives for basic freedom and human rights in Tibet. We remember the Tibetan political prisoners still suffering in Chinese prisons, including the 11th Kunzik Panchen Gedhun Choekyi Nyima, Tenzin Delek Rinpoche, Chadrel Rinpoche, and many others.

We hope for their speedy release and stand alongside them in their aspirations. We also urge Chinese authorities to release the 2010 Nobel Peace Laureate, Liu Xiaobo, and to finally, also after 25 years, to meet the aspirations of the tragic events at Tiananmen Square.

A genuinely civilized democratic world cannot be achieved as long as injustice is inflicted in any corner of that world. The Kashag reiterates on this 66th Human Rights Day that the only way to end repression and the deteriorating situation of Tibet is for China to change its current hard line policy and respect the needs of the Tibetan people.

On this occasion, we deeply thank the citizens and Government of India. All the achievements of Tibetan refugees in reconstructing a cohesive and strong community would not have been possible without the constant support of India. We especially value and give thanks for the recently announced Tibetan Rehabilitation Policy 2014. We also wish to thank all Indian state governments, especially the beautiful state of Himachal Pradesh, for hosting the Central Tibetan Administration. We are grateful for the opportunity to participate in the two-day International Himalayan Festival to be held in Dharamsala in honor of His Holiness the 14th Dalai Lama.

Finally, we also express our deep gratitude to all friends of Tibet and well-wishers across the globe. We end today with fervent prayers for His Holiness the Dalai Lama’s long and healthy life. May all his wishes be fulfilled, including all the Tibetans be united together in our homeland.