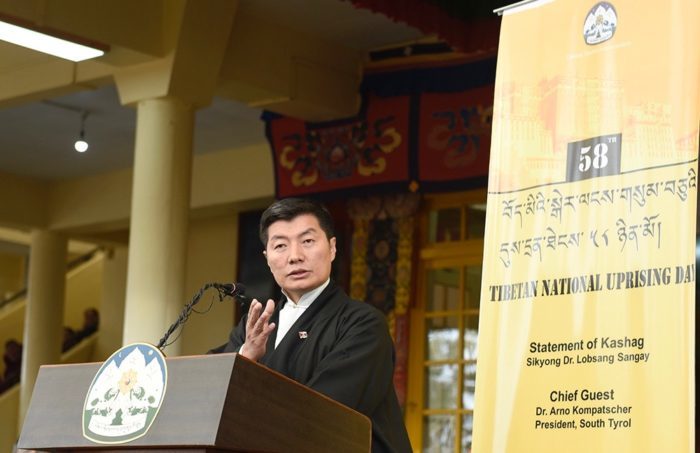 On this day, in 1959, Tibetans from across the social spectrum rose up to stage a defiant yet peaceful uprising against the illegal occupation of Tibet by the People’s Republic of China. Today, as we commemorate the fifty-eighth anniversary of the Tibetan National Uprising Day, we remember and pay tribute to all those who have sacrificed their lives for our nation’s struggle. Till date, an estimated million Tibetans have perished and 98% of monasteries were destroyed under the Chinese occupation.

Although, today is a time for us to mourn, however there are reasons for us to be proud and hopeful. Hopeful of the fact that on this historic day, Tibetan men and women from all three provinces marched in unison, bravely challenging Chinese invasion by raising the slogans…. “Tibet belongs to Tibetans,” and “stop interfering in His Holiness the Dalai Lama’s rule,” thus making known their aspirations.

Even today, as we speak there is a major military presence in Lhasa, the capital city of Tibet, and on March 3 this year, a 5000-strong army officers with a convoy of 1000 military vehicles conducted a massive military drill in Lhasa making it reminiscent of a war zone.

Since then, despite the repression and crackdown, Tibetans in Tibet have been at the forefront of the Tibetan freedom struggle to protect their political, social, cultural and environmental rights. Despite the increased repression and intensified crackdown, they have made clear their genuine aspirations, as reflected in the case of 145 self-immolations that called for “Freedom for Tibetans” and “Return of His Holiness the Dalai Lama to Tibet.”

The resilience of Tibetan people and commitment to non-violence have gained the respect, and support from around the world.

In February this year, on the eve of 34th session of UN Human Rights Council in Geneva, in a rare and bold move, six independent UN experts made public a joint statement on a range of human rights violations in Tibet, particularly on the case of Larung Gar and Yachen Gar. In a sharply worded statement, the UN experts expressed alarm over China’s violations of international human rights laws and wide-scale religious repression in Tibet.

The Chinese government under President Xi Jinping’s leadership has taken an alarming position on Tibet that states ‘China’s security and stability is dependent on Tibet’s security and stability,’ based on which individual Tibetans are having to ‘give up on their security in return for gaining harmony.’ Such strategic approach warrants increased repression in Tibet.

A recent report issued by the Intermediate People’s Court of Tibet Autonomous Region (TAR) points to 1446 cases of detention and 1793 cases of indictment in TAR alone in the year 2016, in a widespread crackdown on Tibetans under the pretext of punishing criminals.

The article 36 of Chinese constitution guarantees ‘freedom of religion,’ but in practice, China’s State Council has revised the ‘Regulations on Religious Affairs’ to directly control all religious affairs in Tibet.

The Chinese authorities have begun demolishing Larung Gar institute since last year. This resulted in the forced eviction of monks and nuns from the institute to realize their plan of reducing the 10,000 plus residents to 5000. The evictees are forced to sign a document pledging to neither return to the institute nor continue their practice in other monastic institutes in their hometowns. Similarly, around a thousand nuns were forcibly evicted from the Yachen Gar Institute. The situation is akin to the revival of Cultural Revolution in Tibet.

For Tibetans and Buddhists, this year began with the successful conferment of the 34th Kalachakra initiation by His Holiness the Dalai Lama in India. However, the Chinese authorities labeled the Kalachakra teachings as ‘illegal.’ Travel restrictions were imposed on Tibetans in Tibet to prevent them from attending the Kalachakra teachings. The returnees faced interrogation, had their passports torn or discarded, and were kept under strict surveillance with their mobility rights restricted.

While millions of Chinese citizens with passports are able to travel freely around the world, however Tibetans in Tibet, including Communist party members are denied passports and face restrictions in their travel, even for medical and educational purposes, needless to mention for pilgrimage purposes. A Tibetan blogger in Tibet wrote, “getting a passport is harder for a Tibetan than getting into heaven.”

Not only for travel outside Tibet, stringent measures restrict movement within Tibet – from Kham and Amdo in eastern Tibet to the capital city of Lhasa, even if the purpose is to visit families and go on a pilgrimage. Even within provinces, severe restrictions are imposed on local Tibetans as reported during the recent butter lamp festival in Kumbum Monastery and the annual Cham dance in Takstang Lhamo Kirti monastery.

In a blatant disregard for the feelings of the Tibetan people, a week ahead of the Chinese New Year holiday, the regional government in the ‘Tibet Autonomous Region’ made mandatory the placing of one million portraits of the four generations of Communist Party leadership in homes, schools and monasteries.

We call on the Chinese government to end the discriminatory policies, issue travel documents to Tibetans and respect their freedom of movement both within and outside of Tibet.

The arrest and detention of Tashi Wangchuk, a bi-lingual education rights advocate, charged with separatism and now awaiting sentence is a glaring reflection of China’s violation of its own laws that guarantee minorities with the right to use and develop their spoken and written language.

Such repressive policies have driven Tibetans in Tibet to resort to desperate measures. The latest case is that of 33 year-old Tashi Rabten who died in self-immolation protest in December last year.

The 2016 annual report of the U.S. Congressional Executive Commission re-designated China among the Countries of Particular Concern (CPC). The Amnesty International Report 2015/2016 pointed to increasing restrictions on Tibetan monasteries by the Chinese government. The 2016 Freedom House report ranked Tibet in the second worst in political and civil rights after Syria.

Given the international condemnation of China’s Tibet policies, we once again call on the Chinese leadership to review its wrong policies in Tibet and revisit Hu Yaobang initiated liberal policies on Tibetan people. Ultimately the Tibet issue can be best resolved by adhering to the win-win proposition of the Middle Way Approach and resuming dialogue with the envoys of His Holiness the Dalai Lama as reiterated by the US Government and European Parliament.

The Kashag’s ‘Five-Fifty Vision,’ draws upon His Holiness’ maxim to ‘hope for the best and prepare for the worst.’ This envisions resolving the Tibet issue in the next five years through the Middle Way Approach but at the same time ensure that the Central Tibetan Administration will survive, strengthen and sustain in order to carry forward the Tibetan freedom struggle for the next fifty years.

In exile, the Central Tibetan Administration is putting its best efforts to strengthen the social foundations of the Tibetan political struggle. In December 2016, His Holiness the Dalai Lama conferred the historic Geshema degree to twenty nuns. This year, the Kashag unveiled the revised version of ‘Tibetan Women’s Empowerment Policy’ and subsequently convened the first ‘Tibetan Women’s Empowerment Conference.’ Such concerted efforts are aimed at realizing His Holiness’ vision of seeing Tibetan women contribute to global and peaceful leadership in the 21st century. The Kashag has designated March 12 every year as ‘Tibetan Women’s Day.’

While the exile Tibetan community is a successful model and the non-violent Tibetan movement continue to inspire other global movements, however, there still exists a fringe group of Dholgyal propitiators, who under the garb of freedom of religion and speech, continue to denigrate the accomplishments of His Holiness the Dalai Lama and discredit the Central Tibetan Administration. They have sadly become a pawn in the game of Chinese government’s power politics. We condemn such vicious insinuations and urge them to renounce the wrong path and embrace the right path.

To further galvanize the global Tibet movement, the Kashag is observing year 2017 as a year of campaign. The year 2018 will mark 60 years since Tibetans first set foothold in exile. We will therefore observe 2018 as a year of gratitude to express our deep appreciation to the governments and people around the world, in particular India, for extending their hospitality and unwavering support over the last half-century.

We thank the National Endowment for Democracy for presenting a citation in recognition of the democratic institution of the Central Tibetan Administration as envisioned by His Holiness the Dalai Lama. We also thank USAID for providing certificate of appreciation to the Tibetan medicare system.

We thank the governments, leaders, parliamentarians, Tibet support groups and freedom-loving people around the world for supporting the just cause of Tibet. We thank them for giving us the impetus to forge ahead, notwithstanding the indomitable challenges that come our way. In particular, I would like to thank the Parliamentarians in Japan, Canada and the United Kingdom for hosting me and supporting the just cause of Tibet. This sends a message of hope and encouragement to Tibetans in Tibet.

During the long life prayer offering made on the final day of the Kalachakra, His Holiness reaffirmed his commitment to live for more than 100 years. I, on behalf of all Tibetans, express our heartfelt gratitude to His Holiness for his benevolent commitment. At the same time, I urge every Tibetan to take heed of His Holiness’ advice and earn collective merit. While keeping unity as the paramount goal, we must pledge to renounce any regional or sectarian affiliations.

Finally, we express our fervent prayers for the long life of our beloved leader His Holiness the Great 14th Dalai Lama of Tibet. May all his wishes be fulfilled. May the non-violent cause of Tibet prevail and may we soon realize the joyful reunion of Tibetans in our homeland.