Statement of Sikyong Dr. Lobsang Sangay on the 55th Anniversary of the Tibetan National Uprising Day 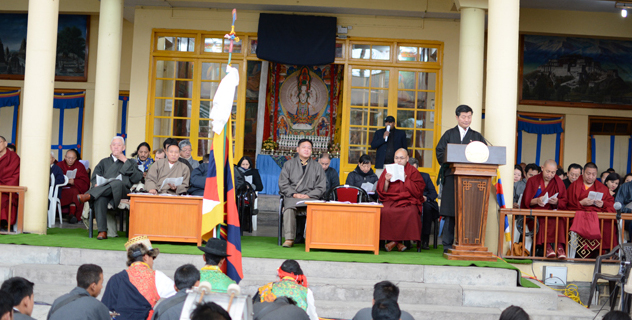 I visited Tawang in Arunachal Pradesh this January and was profoundly moved to see the path His Holiness the Dalai Lama took to enter India. I also visited Bomdila and Tuting, where thousands of Tibetans sought refuge. There is no escape from the painful reality that many of the elders who were forced to make the journey into exile in 1959 have died without fulfilling their dreams of returning to their homeland. Similarly, innumerable Tibetans in Tibet have died without reuniting with family members or realizing their freedom. I take great solace, however, that their hopes and dreams live and grow in their children.

School children in Chabcha have demanded Tibetan language instructions in their schools, Tibetans in Driru have refused to hoist Chinese flags on their rooftops, and outcries over the human loss and environmental destruction of Gyama mine in Meldro Gungkar reach our ears. These protests unambiguously refute the Chinese propaganda that, “except for a few, Tibetans are happy in Tibet.”

Since 2009, there have been 126 self-immolations all across Tibet. Despite repeated appeals not to engage in such drastic actions, the self-immolations have continued. Tsultrim Gyatso, a monk, who self immolated on December 19, 2013, wrote in his last testament: “Can you hear me? Can you see it? Can you hear it? I am compelled to burn my precious body for the return of His Holiness the Dalai Lama, for the release of the imprisoned Panchen Lama and for the welfare of the six million Tibetans.”

The Kashag expresses its deepest respect to all the brave men and women in Tibet. The Kashag is listening to the calls for the end of repression and suffering of Tibetans inside Tibet. It is for this reason that its primary and immediate objective is to peacefully resolve the issue of Tibet through dialogue as soon as possible. At the same time, the Kashag needs a long-term strategy to strengthen and sustain our struggle, if necessary. One complements the other, and so the Kashag will make efforts to both resolve the issue of Tibet through dialogue and successfully sustain the Tibetan struggle. 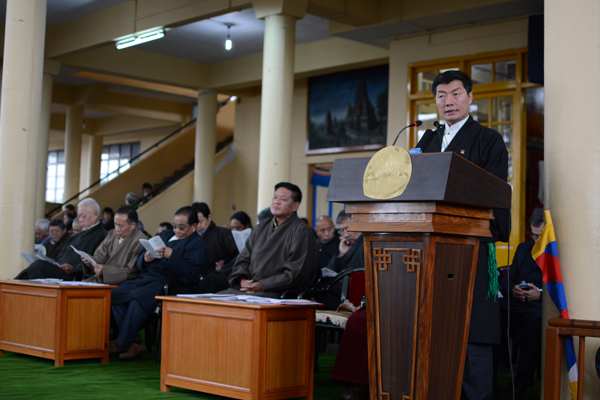 My fellow Tibetans, we must bear in mind that the year 2020 will mark 70 years since the invasion of Tibet by the People’s Republic of China. By then, the generation of Tibetans with memories of a free Tibet will have greatly dwindled. His Holiness the Dalai Lama will turn 85 and by that year he will have led the Tibetan people for 70 uninterrupted years. The next generation of Tibetan leadership inside and outside Tibet has to cope with a crucial and challenging reality. Tibetans inside Tibet will have no personal memories of traditional Tibet, while Tibetans outside of Tibet will know only a life lived in exile. Exile Tibetans constitute only 2.5 percent of six million Tibetans but it is likely there will be equal number of Tibetans in the West and in India, Nepal and Bhutan.

Exile is a precarious phase of uncertainty and contingency, and occupation can be a dangerous transition to permanent subjugation. The challenge we face will be in reconciling the distance and gap between life in exile and life under Chinese occupation. We will have to learn to carry forward the freedom struggle under these very different Tibetan realities and experiences, none of which are rooted in personal memories of a free Tibet. How do we achieve this?

As a long-term strategy, we need to build self-reliance in the Tibetan world, in thought and action. Our more than 50-year-old movement cannot depend solely on others to help us achieve our goals. It is time to assume individual responsibility and collective leadership and stand on our own feet. We need to build our individual and collective strengths. We need to reflect deeply.

I believe that education is our most potent and realistic investment and tool. The more skillfully we educate our entire population, the more successfully we will develop strong foundations of self-reliant economic, technological, and governmental systems. Our global supporters know our cause is just and they value our Buddhist heritage. Tibetans embrace the values of humility, integrity, and resilience as the bedrock foundation of the Tibetan struggle.To that we must add modern education to achieve our goals. It is the combination of traditional values and contemporary education that will keep our struggle vigorous, dynamic, and formidable. 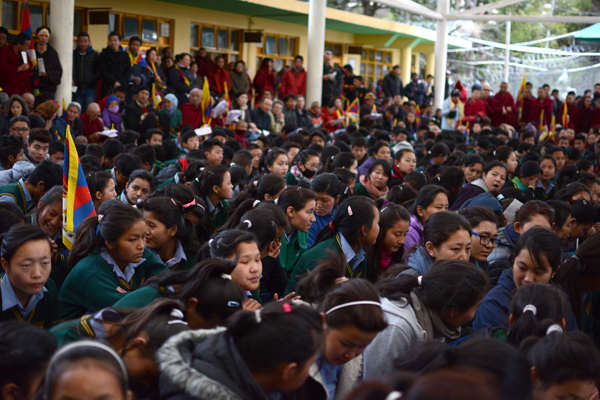 It is crucial that younger Tibetans study the language and history of the nation. It is equally important that they record the stories and narratives of individual families and ancestral land. Continue to enjoy momos in Tibetan restaurants and wear chubas in celebration of the Tibetan culture, but for identity to take strong roots we must educate ourselves, engage deeply with Tibetans from Tibet, and reflect individually on the challenges that lie ahead.2014 is a year to engage, educate, and empower ourselves and the movement.

In conclusion, I welcome the recent meeting between His Holiness the Dalai Lama and President Barack Obama. I appreciate President Obama’s strong endorsement of the Middle Way Approach. A genuine autonomy for Tibet through the Middle Way Approach aspires to replace political repression with basic freedom, economic marginalization with economic empowerment, social discrimination with social equality, cultural assimilation with cultural promotion and environmental destruction with environmental protection. We are committed to the Middle Way as the most effective approach to end the suffering in Tibet. It is our hope that the new Chinese leadership led by President Xi Jinping will pay heed and adopt this pragmatic and moderate stand.

The Kashag would like to thank the great nation of India and its kind people. After assuming political responsibilities in Dharamsala, I came to realize more than ever how much India has supported and continues to support Tibet and the Tibetan people. The Kashag also extends deep appreciation to governments, parliamentarians, Tibet Support Groups and individuals around the world and urges them to continue the journey with us.

I am happy to announce that the Central Tibetan Administration will observe 2014 as the year of His Holiness the 14th Dalai Lama, to pay tribute to his visionary leadership and contribution to Tibet and the world. I am also happy to remind Tibetans and our friends across the globe that 2014 marks the 25th anniversary of His Holiness the Dalai Lama receiving the Nobel Peace Prize. On April 25th, we will also commemorate the 25th birthday of the 11th Panchen Gedun Choekyi Nyima.

The Tibetan people have risen time after time to overcome great adversities in the long history of our civilization. Today, our sense of identity, solidarity, and dignity is deeper than ever. If we remain united, and bring the rich traditions of the elders to interplay with the innovation and dynamism of the younger generation, I firmly believe that the Chinese government will have no choice but to address our aspirations.

Dear Tibetan brothers and sisters inside Tibet, our journey may be long and the challenges may appear daunting, but we will succeed. In Tawang, I saw the path His Holiness the Dalai Lama, our parents, and grandparents took from Tibet to India. From a distance, I could see the great mountains and rivers of Tibet. I took it as a good omen to begin 2014, that like you, I saw a path back to Tibet.

Finally, I pray for the long life of His Holiness the Dalai Lama and the immediate resolution of the issue of Tibet.