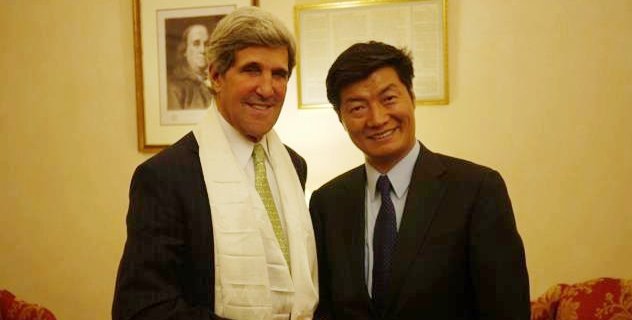 Dr Lobsang Sangay, Sikyong or the democratically-elected political leader of the Tibetan people, with Senator John Kerry (Democrat, Massachusetts), Chairman of the US Senate Foreign Relations Committee, on 19 July 2012

DHARAMSALA: Sikyong Dr. Lobsang Sangay thanked U.S. Secretary of State John Kerry for being a long-term friend of Tibet and urged the Secretary to prominently raise the Tibet issue and the current critical situation in Tibet in his discussions with the Chinese leadership during his maiden visit to China as Secretary of State.

In his April 4, 2013 letter to Secretary Kerry, the Sikyong said “promotion of human rights and raising the Tibet issue is not only a morally right thing to do, but also a more open China that respects human rights will make for a more stable partner and will be less of a threat to international peace and security.”

“China has neither employed the constitutional mechanism at its disposal nor has it shown the political will to resolve the Tibet issue peacefully. Prompt resumption of dialogue between the Chinese and Tibetan leadership, which has been stalled since January 2010, will give new hope to Tibetans and begin the process of finding a solution that works for both the sides. From our side, we are committed to engaging in meaningful dialogue with the Chinese government anywhere, at any time. I urge you to encourage the Chinese government to resume meaningful dialogue with the Tibetan leadership,” said Dr. Sangay.  The Sikyong also urged Secretary Kerry to move quickly on appointing a new U.S. Special Coordinator for Tibetan Issues.

Secretary Kerry has met with His Holiness the Dalai Lama on several occasions and with Sikyong Dr. Lobsang Sangay twice in his earlier capacity as a U.S. Senator. The Sikyong’s most recent meeting with then Senator Kerry took place in July 2012 in Washington, DC. The two of them discussed at length the current crisis in Tibet.