Sikyong Testifies Before Canadian Parliamentary Committee on Crisis in Tibet

Testimony of Dr Lobsang Sangay, the Sikyong or the Tibetan Political Leader, before the Subcommittee on International Human Rights of the Canadian Parliament, on 26 February 2013 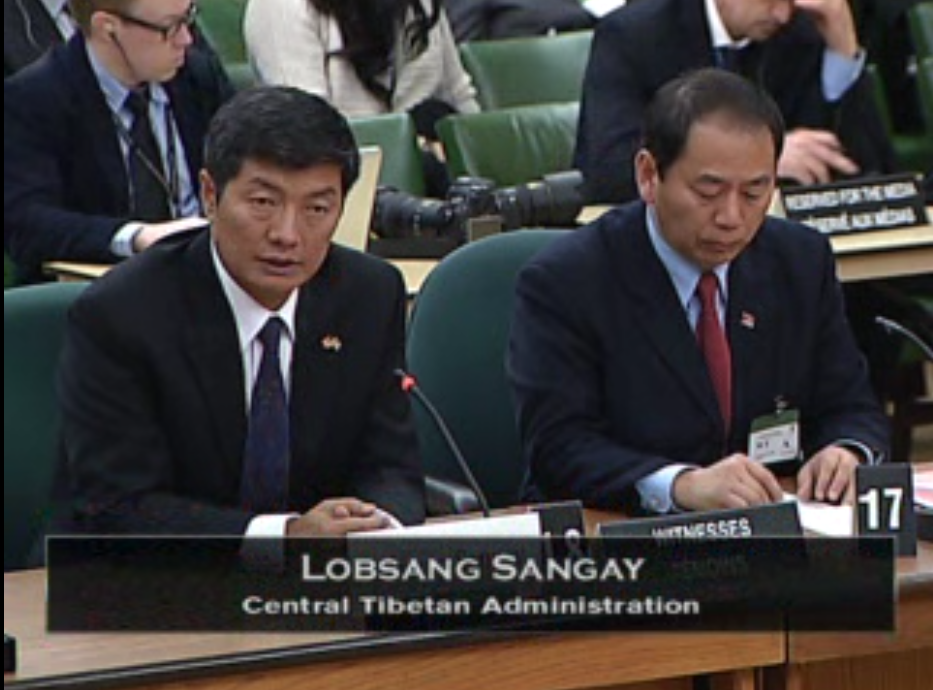 Sikyong Dr Lobsang Sangay (L) and His Holiness the Dalai Lama’s Representative Lobsang Nyandak, during the former testimony in Canada

Thank you very much to the Chair and the members of the Sub-Committe on International Human Rights.

It is an honour and privilege to be in your presence to testify about the situation in Tibet on behalf of the Tibetan people. I would like to extend deep appreciation to Canada for awarding His Holiness the Dalai Lama the honorary citizen of Canada. His Holiness the Dalai Lama sends his good wishes and also wants to thank Prime Minister Stephen Harper for meeting for His Holiness the Dalai Lama and has been an advocate of the Tibet issue. We also welcome the statement issued by honourable foreign minister John Baird on December 14 on the self-immolations, particularly encouraging the Chinese government to enter into dialogue with His Holiness the Dalai Lama and his representatives. The Central Tibetan Administration maintains that we have to resolve the issue of Tibet peacefully through dialogue and middle-way is the official policy which seeks genuine autonomy within the framework of the Chinese constitution. We would also like to extend our appreciation to honorable minister Jason Kenny and government for allowing one thousand visas to Tibetans living in Arunachal Pradesh state of India to migrate to Canada. We have done the selection of around 900 Tibetans so far, and we hope the phase of Tibetans would be coming to Canada. Canada has been very generous host to more than 5,000 Tibetans since 1971 after they had to settle here and they are by and large law-abiding residents and citizens of Canada for which we are very grateful.

Unfortunately, the Chinese government instead of finding solution, is resorting to blame game and they are blaming us the instigator. If you look at the blames that they have levelled against us, first they say the self-immolators are crazy and they have lost their mind. When this did not work, they started saying these are the jobless, hopeless people who are resorting to self-immolation. Then when self-immolation escalated they said these are instigated from outside, by us. There is not even a shred of evidence as far as these allegations are concerned and we have welcomed the Chinese government to come to Dharamsala to see our files and look for evidence if there is any. We can categorically say that the allegations made by the Chinese government are baseless. And they are welcome to come to Dharamsala and find out if there is any evidence. In reality, the blame and solution lies with Beijing. The cause of self-immolation are occupation of Tibet and repression of Tibetans. Tibetans are saying occupation is unacceptable and repression is unbearable. Hence there is political repression, economic marginalisation, environmental destruction, cultural assimilation, and denial of religious freedom. These are the reasons why Tibetans are forced to resort to self-immolation. There is no space for any kind of protest and there is no freedom of speech for Tibetans. Hence tragically and sadly, they are resorting to self-immolation.

Having said all that, we do believe, as I stated in the beginning of my statement, that we have to find the solution through peaceful means. Tibetans have subscribed to non-violence and democracy for these many decades. We will continue to subscribe and believe in these principles. So we seek the support from friends like you who believe in freedom, who believe in democracy, that the Chinese government ought to enter into dialogue to solve the issue of Tibet peacefully. This is what we believe, and with your support, we will continue to speak out for Tibetans inside Tibet. I really appreciate the members of the Parliament and the Committee, who are here and who have been a long term friends of Tibet and Tibetan people. And I urge you at the critical time of Tibet to be with us and that you are right side of the cause. As we see around the world that justice ultimately prevails and it will prevail in Tibet as well. That will be partly because of your support and efforts.