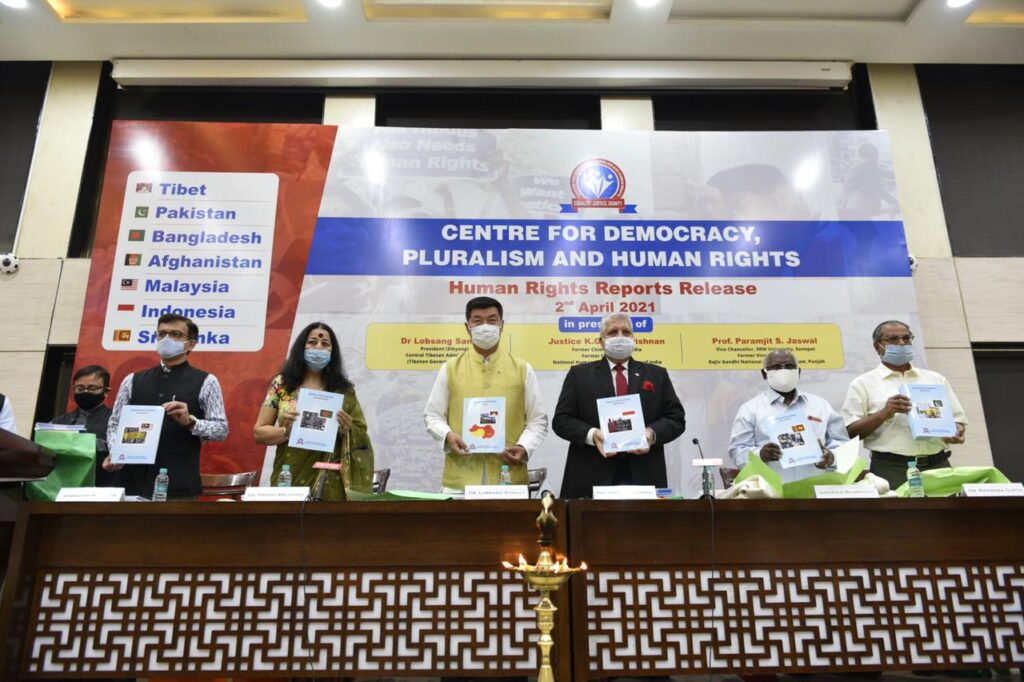 New Delhi: Ahead of his official engagements in Tibetan settlements in South India, the President of the Central Tibetan Administration released a human rights report published by the New Delhi-based Centre for Democracy, Pluralism and Human Rights at the Constitution Club of India in Delhi earlier today.

The Centre for Democracy, Pluralism and Human Rights consists of a robust team consisting of university academics, legal experts, community volunteers involved in promoting and advocating for human rights, basic freedom, equality, justice and dignity to all irrespective of gender, religion, class or caste.

Speaking as the chief guest of the ceremony, Dr Sangay noted how China’s presence in most of the neighbouring countries from Tibet, to Pakistan, Bangladesh, Afghanistan, Malaysia, Indonesia and Sri Lanka comes as no surprise, adding “President Xi Jinping has declared socialism with Chinese characteristics as the vision for China and the whole world and China’s dream is another of his vision based on which they want to ideologically dominate the world, specifically on human rights.”

“If you look at the 15 UN agencies, 5 are headed by Chinese officials because China happens to be the second-largest donor to the UN after America by which they can appoint their personnel. China also happens to be the largest borrower of the World Bank, at least 2 years ago. They get a loan at a low-interest rate from the World Bank, more than a billion or two and they donate 100 million dollars to the UN and they can appoint their personnel,” he said explaining how China manoeuvres its UN membership status to redefine human rights and restructure the UN body.

Dr Sangay while appreciating the efforts made by the Centre in bringing out the report urged that there should be a greater awareness drive needed in the universities in terms of Tibetan studies. Read the report here.

“The Indians, particularly the younger generation, should pay more attention to the study of Tibet and understanding Tibet better is only in the interest of Indians,” signed off Dr Sangay.

Sikyong cited the recent World Freedom Index published by Freedom House which ties Tibet with Syria, indicating a marked deterioration in human rights abuses the last year in order to highlight the lack of media coverage of Tibet’s plight in comparison with Syria and the suppression of journalistic freedom.

He challenged the justification of poverty alleviation that is used as a ruse for Sinicization goals citing the reports of Adrian Zenz who revealed the labour militarization programme in Xinjiang and Tibet and ironically used by China to claim victory of its policies, in turn, applauded by the Human Rights Council which favours China’s account over Tibet.

Calling for global coalitions to contain China’s threats, he suggested a united approach to counter China, rather than individual countries engaging in a ‘tit for tat’ response with China.

Other legal and Human rights experts also spoke on human rights violation being perpetrated in these countries.

Following the event, President Dr Sangay departed for Bangalore from where he will embark on his official tour across Tibetan settlements in South India.

– Tenzin Wangchuk contributed to the report. 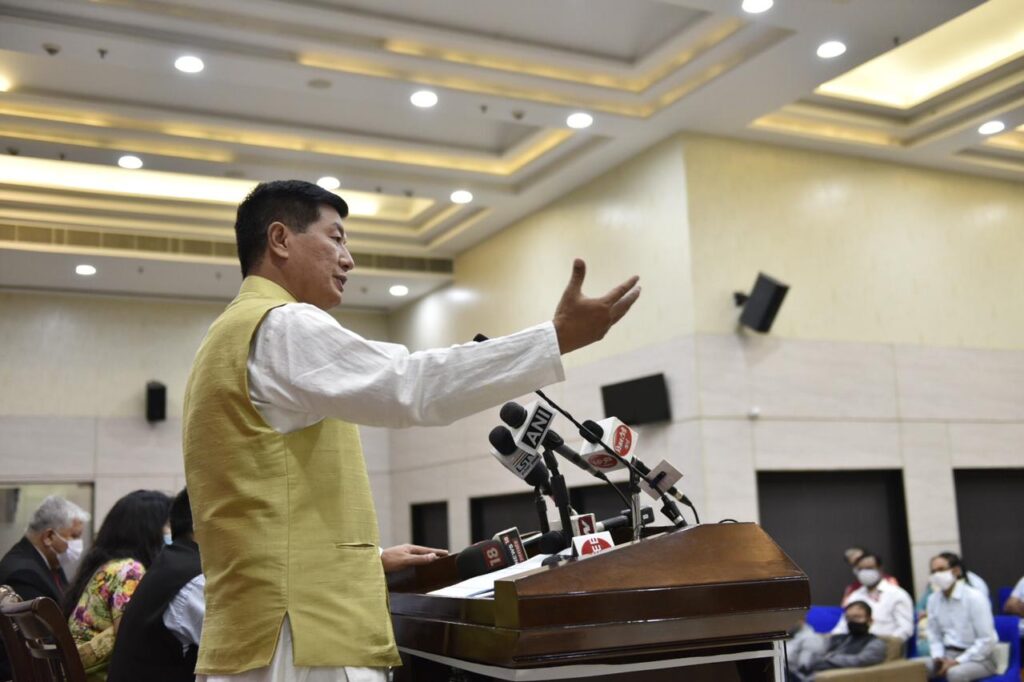 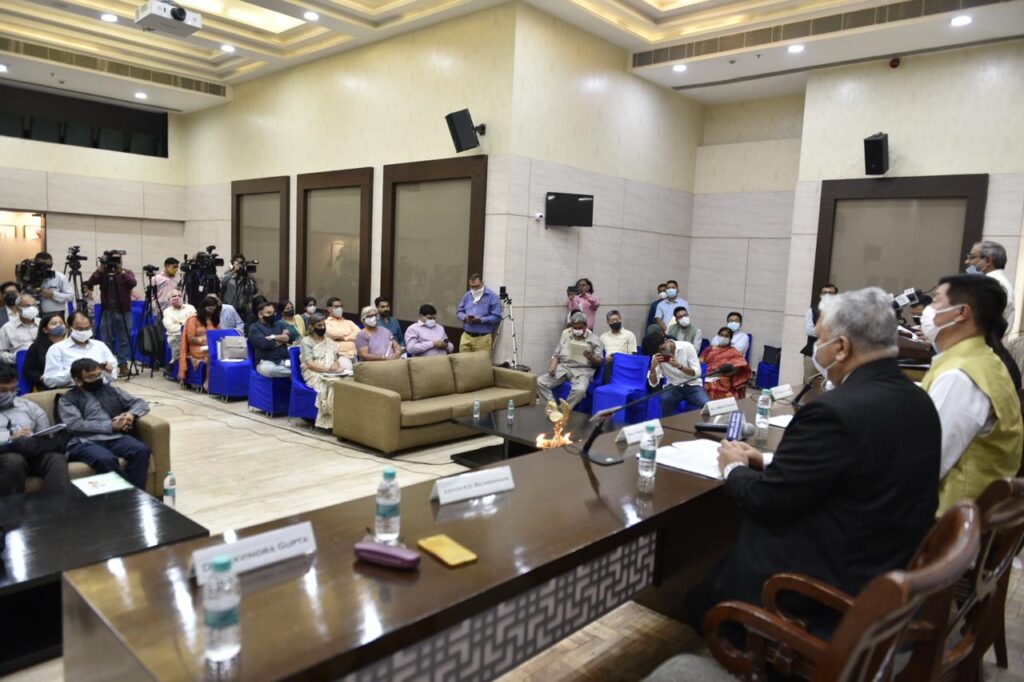 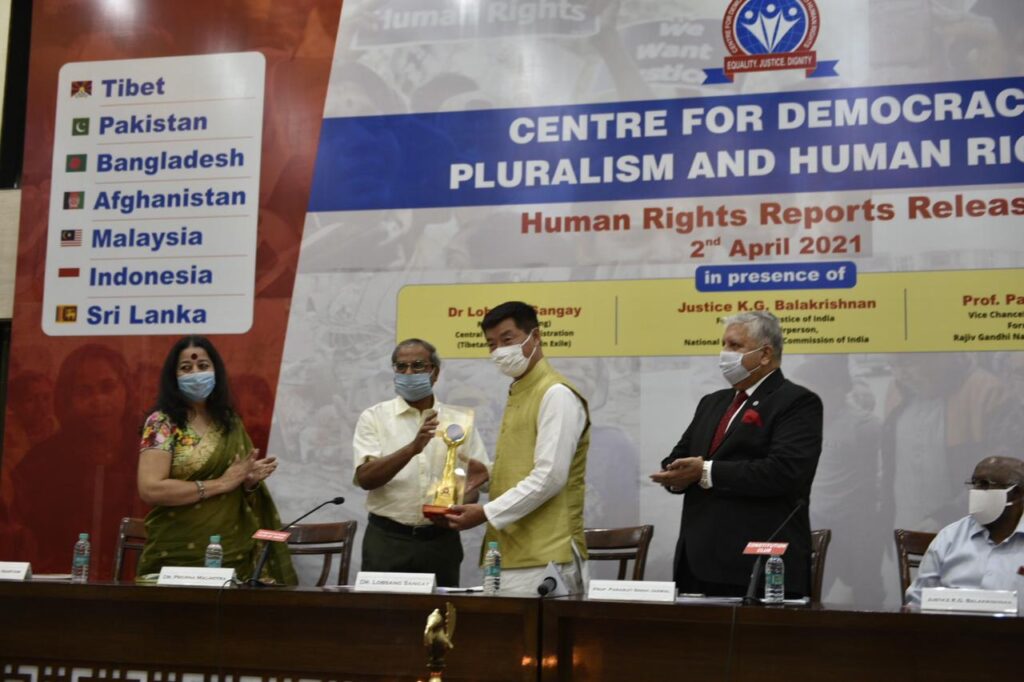 Sikyong honoured with a memento by the Centre for Democracy, Pluralism and Human Rights. Photo/Tenzin Wangchuk/CTA