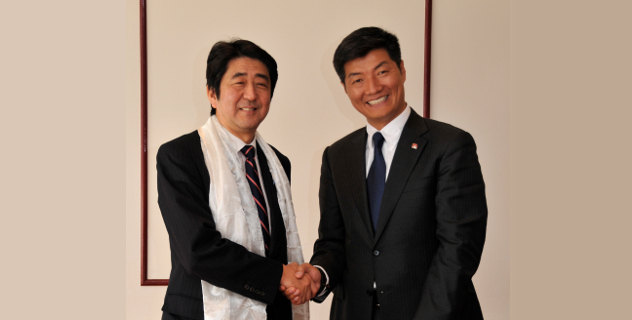 Sikyong Dr Lobsang Sangay with Mr Shinzo Abe during his visit to Japan in April 2012.

The Central Tibetan Administration congratulates the Liberal Democratic Party leader Shinzo Abe on winning the parliamentary elections in Japan. The Sikyong met and had cordial exchanges with the PM-designate Shinzo Abe on four separate occasions during his visit to Japan in April 2012.

“On behalf of the Tibetan people, I would like to congratulate Mr Shinzo Abe on winning the elections and wish him all the best as the next prime minister of Japan. I thank the people and government of Japan for their long-standing support for democracy and non-violent struggle of the Tibetan people. I look forward to your continued support for the issue of Tibet,” the Sikyong said.

In his meetings with the Sikyong, Mr Abe said that the Tibet issue was one of those rare issues which enjoys multi-party support in Japan. He said he would do his best to help change the situation in Tibet. Mr. Abe reiterated this support during his meeting with His Holiness the Dalai Lama’s visit to Japan in November.

The Sikyong thanks Mr Abe for his heartfelt support, and expresses deep appreciation for hosting him during five-day visit to Japan earlier this April. The highlight of the Sikyong’s visit was his address to almost 100 parliamentarians and their representatives from five political parties of Japan. The Sikyong spoke on “Freedom in Asia and the Wave of Democratization: What is Japan Expected to do?” The event was co-hosted by the Japan Institute of National Fundamentals, a leading Japanese think-tank led by Ms. Yoshiko Sakurai. The parliamentarians issued a statement urging the Chinese government to end its repressive policies in Tibet and hold result oriented dialogue with the Tibetan leadership to resolve the Tibet issue.

The Sikyong and the Central Tibetan Administration also expresses its sincerest thanks to Mr Abe for his word of support and for co-hosting His Holiness the Dalai Lama’s recent Japan visit where His Holiness made a historic visit to the Japanese Parliament building and addressed more than 230 Japanese parliamentarians and their representatives.