Sikyong Penpa Tsering interacting with the Tibetan public at Tashiling Tibetan settlement in Sonada, near Darjeeling on 19 October 2021.

Darjeeling: Sikyong Penpa Tsering of the Central Tibetan Administration arrived at Darjeeling on 19 October from Delhi via Bagdogra on the first leg of his official visit to Tibetan communities and settlements based in West Bengal and Sikkim. Sikyong was welcomed at Bagdogra airport upon arrival by representatives of Tibetan communities based in Salugara, Kalimpong, Sonada, Kurseong, and Darjeeling.

Sikyong’s visit to the area is aimed at meeting the Tibetan public and assessing the ground situation to formulate policies and projects that accurately reflects factual situation and data. Sikyong is accompanied on the visit by Dhondup Tsering and Thupten Choedon from Home Department, and Tashi Wangdu and Dolma Lhadon from Social and Resource Development (SARD) of Finance Department.

Sikyong’s first stop on the way to Darjeeling from Bagdogra was at Kurseong. In his interaction with the Tibetan public at Kurseong, Sikyong spoke about the main objectives of his visit and the reasons that compelled Tibetans to come into exile in the first place.  Applauding the Tibetan community in Kurseong for its resilience and harmony, Sikyong spoke about the twin goals of the Central Tibetan Administration i.e, resolving the Sino-Tibetan conflict through dialogue based on the Middle Way Approach, and looking after the welfare of the Tibetan people in exile.

“The Tibetan people have been able to create and sustain a distinct identity in exile in the last over 60 years since 1959,” he said. “This is solely due to the guidance and blessings of His Holiness the Dalai Lama and the support of the Indian government. It is also because of the hard work of the elder generation of the Tibetan people. Despite lacking in modern education, the elder generation of Tibetans worked wholeheartedly with dedication for the Tibetan movement for which we should remain deeply grateful,” he said. Without their efforts and sacrifices, we would not have reached our current situation, he added.

Sikyong further said that to resolve the Sino-Tibetan conflict, Tibetan people need to reach out to the Chinese side to engage in dialogue. He explained that despite growing global support for Tibet, we should understand the geopolitical reasons that is driving this support for Tibet. “One of the reasons that Tibet is gaining an unprecedented attention in India is because of the ongoing border clashes between India and China over the demarcation of Indo-Tibetan border. Similarly, the US support for Tibet is also based on geopolitical reasons. No country will forego its own goals to support Tibet,” he explained, stressing the need for Tibetans to strengthen ourselves first.

Sikyong also spoke briefly about the cultural assimilation policies of the Chinese government. He said that China is intensely imposing the use of standard Chinese (Putonghua) across the country with a focus on targeting and diminishing the relevance of language and linguistic traditions of the various ethnic people. Other such policies aimed at destroying Tibetan religion, environment, Tibetan nomadic lifetyles, etc, are also being practiced, he said.

At Sonada, Sikyong began his interaction with the public by welcoming questions and opinions from the public. In his address, Sikyong talked about the current state of Tibetan schools in India particularly with regard to the decreasing enrolment of Tibetan students, and the issue of transfer of CTSA schools to Sambhota Tibetan schools. He also addressed concerns expressed by some Tibetans about transfer of school real estate. He explained that the lands are leased to the Tibetan community by the Indian government and should be returned to the Indian government if it’s not of use to us. Whats more important, he explained, is the eduction of Tibetan children, not real estate.

Speaking about the Tibetan voluntary contribution fund (Green Book), Sikyong explained briefly about the evolution of the voluntary fund since it was established in 1972. Sikyong explained that since the Tibetan green book is recognised by several governments, he said there have been instances where people have tried to misuse it for personal gains. Therefore, some significant regulations with regard to the green book was made during the 13th Kashag under the leadership of Prof Samdhong Rinpoche, he recalled. He further remarked that the Tibetan green book is the most important document for any Tibetan, and said that it is the right of every Tibetan to obtain it. He also clarified the eligibility regulations regarding Tibetan green book, and said that a clear-cut guideline regarding applying for the green book is forthcoming soon.

Sikyong spoke about the current political developments inside China under President Xi Jinping and said that Sino-Tibetan conflict cannot be resolved without engaging in dialogue with the Chinese government. Unless and until China disintegrates like the erstwhile USSR, dialogue is the only channel through which we can resolve the conflict whether it is on the issue of independence or genuine autonomy, Sikyong said.

Sikyong also emphasised the need to critically study the developments inside Tibet and said that the department of security will gather information about the situation inside Tibet while the Tibet Policy Institute will analyse these information. Based on these analysis, the Kashag will counter the Chinese government’s propaganda, he said. 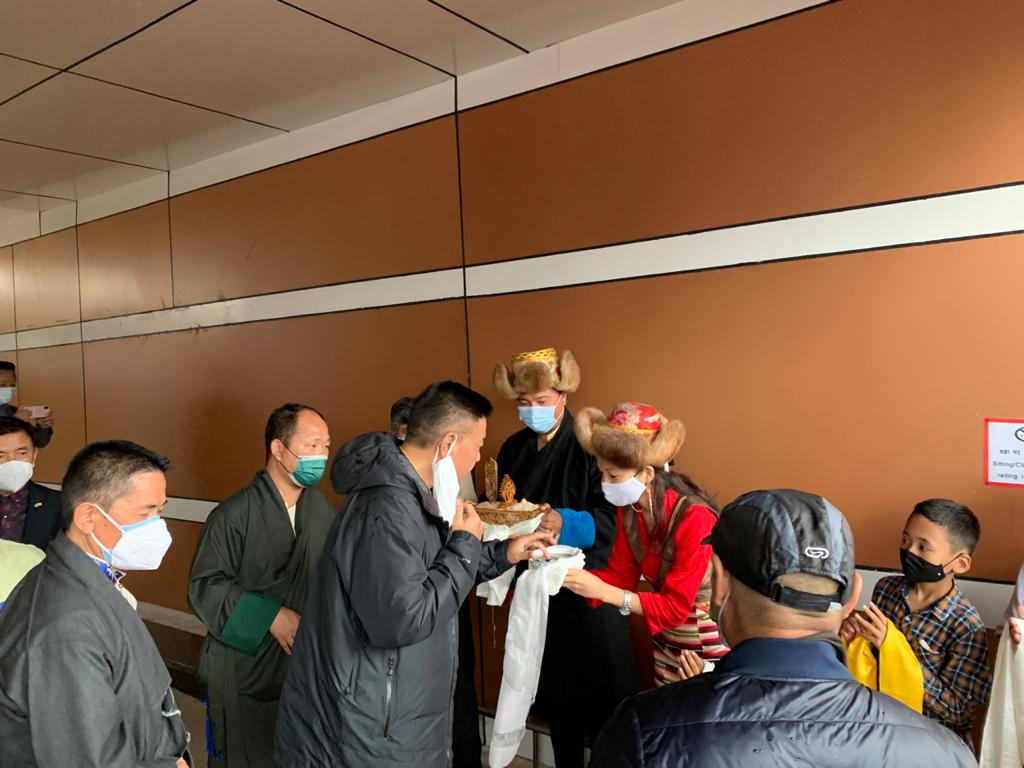 Sikyong being welcomed on arrival at Bagdogra airport near Siliguri on the first leg of his visit to Darjeeling, Kalimpong, and Sikkim on 19 October 2021. 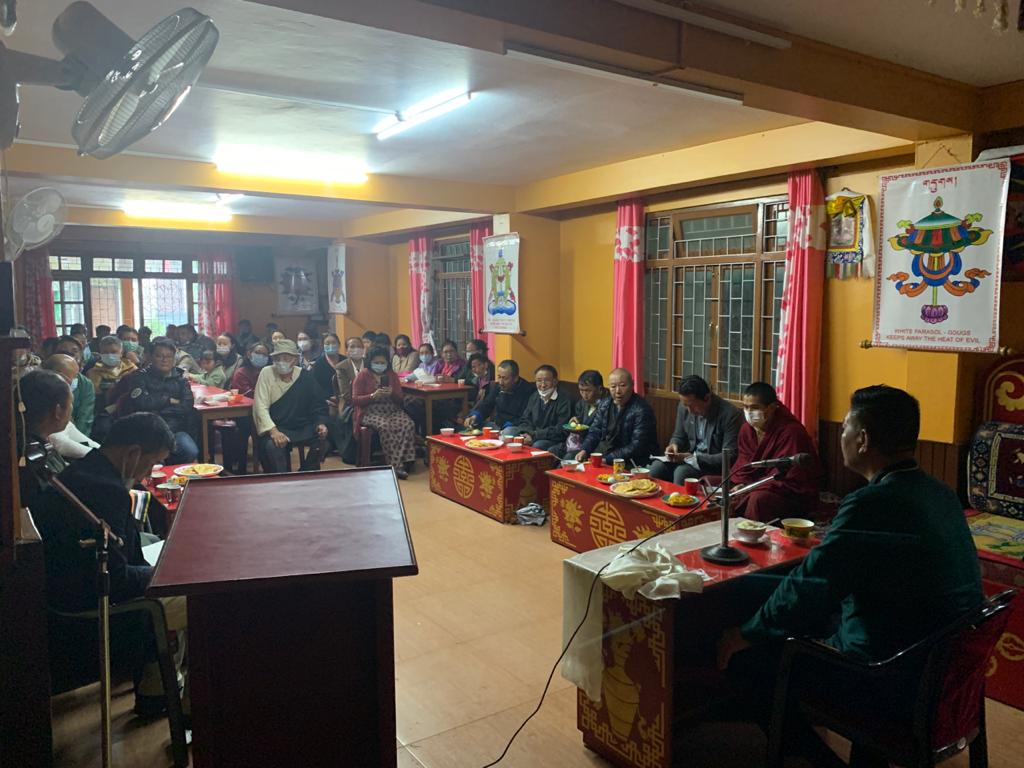 Sikyong with members of the Tibetan community of Kurseong, 19 October 2021. 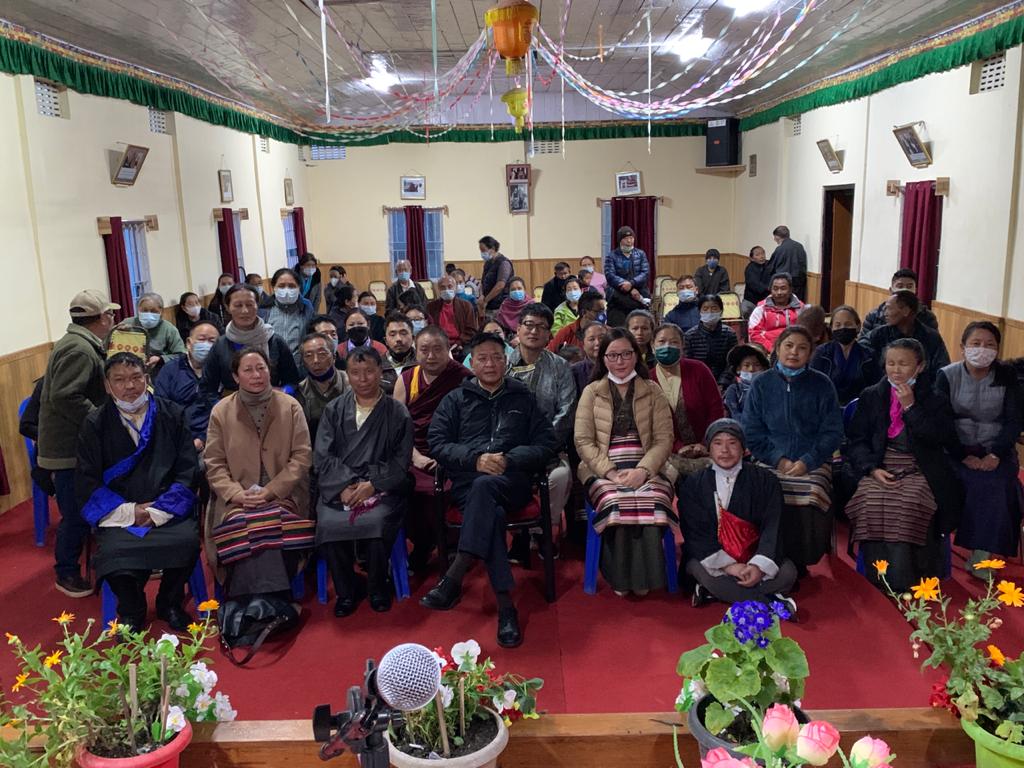 A group photo of Sikyong with Tibetans of Sonada Tashiling, 19 October 2021. 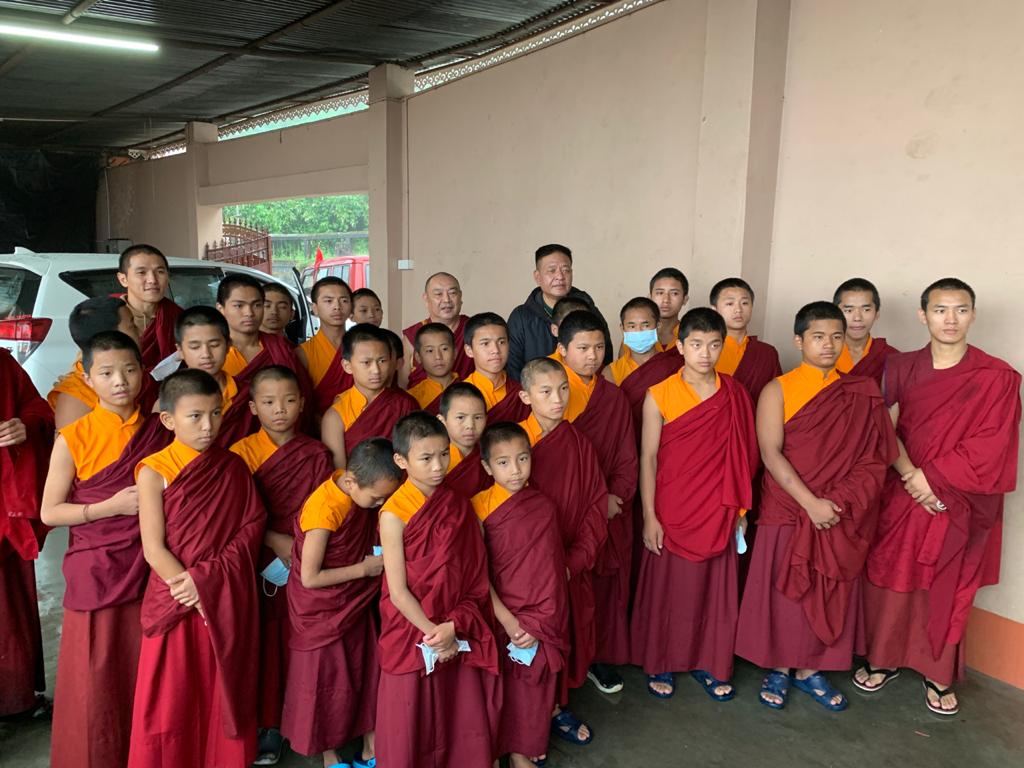 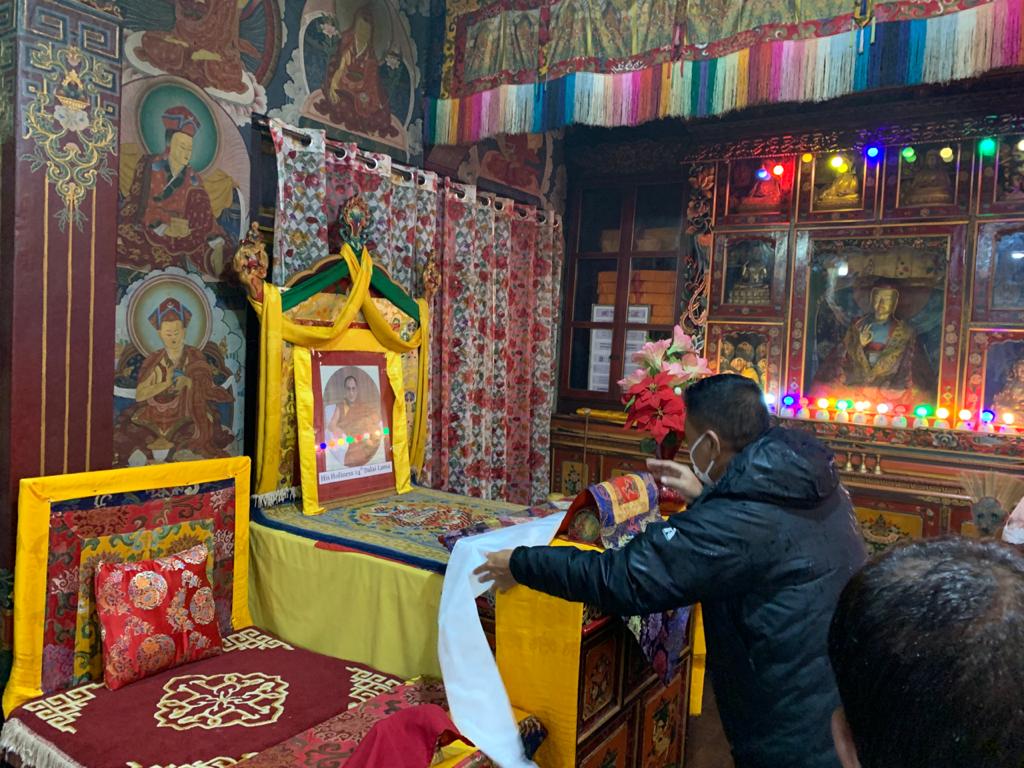 Sikyong offering a Tibetan ceremonial scarf to a portrait of His Holiness the Dalai Lama at Kagyu Ogyan Kunsang Chokorling monastery, 19 October 2021. 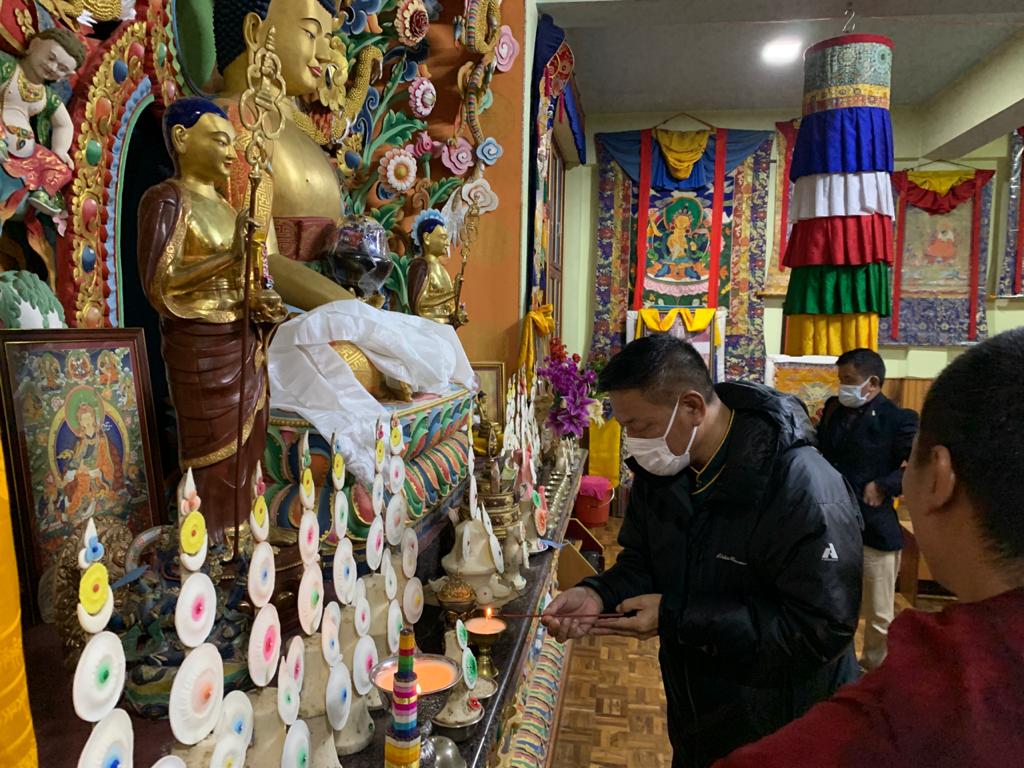