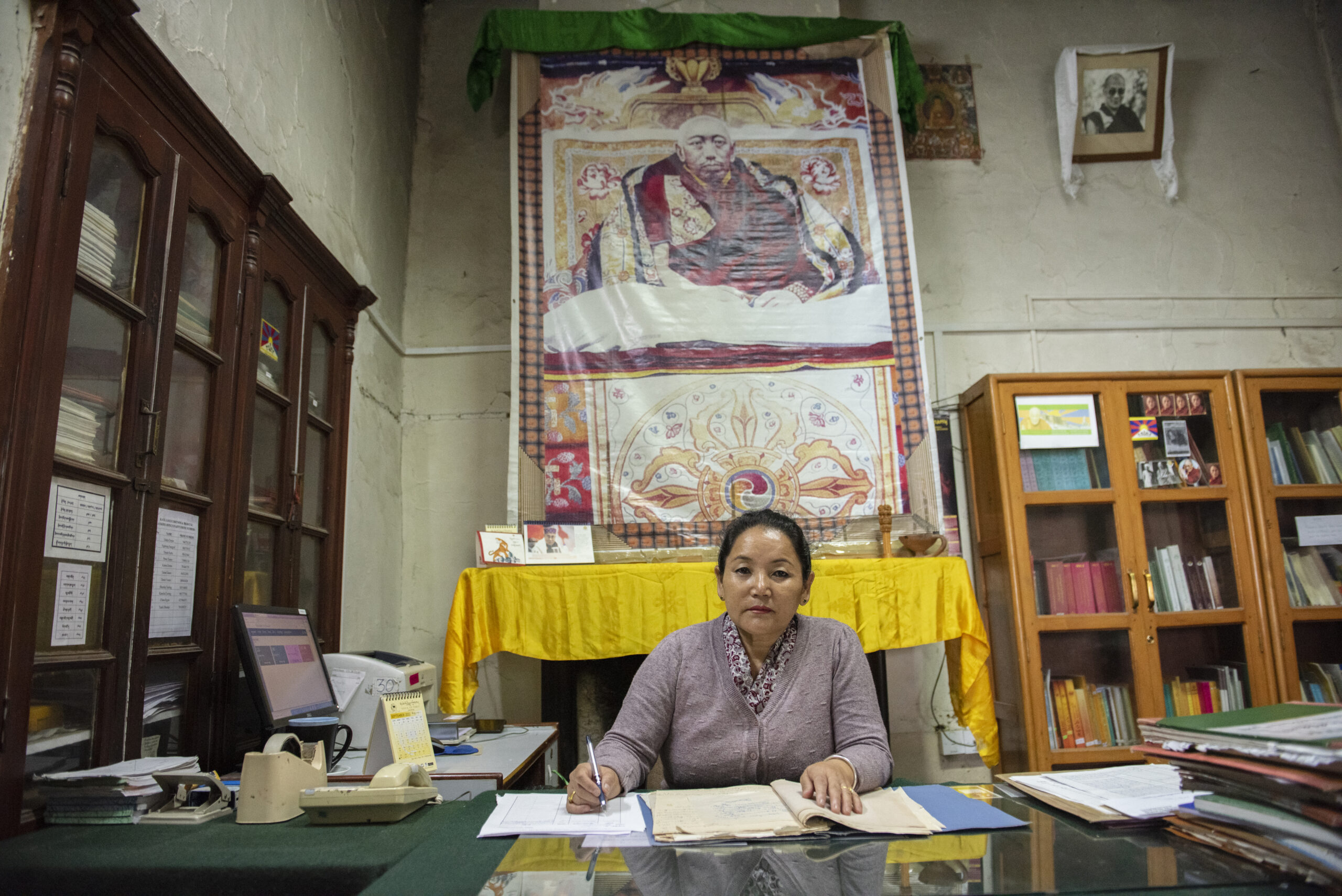 Every first Saturday of the month, as a part of its shout-out campaign, DIIR’s Social Media Desk will be profiling a civil servant of Central Tibetan Administration. This week we are pleased to profile Mrs. Karma Dolma, head of the Office of Documentation and Classification Section, CTA.

Media Executive (SME): Could you briefly tell us about yourself?

Karma Dolma (KD): My name is Karma Dolma. I did my schooling at Upper TCV School in Dharamshala. I have always been active in extracurricular activities and because of that; I was selected as Junior Section Prefect and House Captain back in school. I pursued a Diploma in Secretarial Practice from the Delhi Board of Technical Education. In June 1991, I was appointed by the Central Tibetan Administration (CTA) as Rangkhung (Contract) staff at Department of Home where I served as an assistant to the liaison officer of the US 1000 Tibetan Immigration Project. After completing the project in June 1993, I was appointed as Sponsorship Secretary and in May 1997, I was selected via the entrance examination for the post of Office Secretary for which, I went through 6 months Training course organised by Public Service Commission, CTA.

KD: I have been working in the Documentation Section since the beginning of May 2019 under the Kashag Secretariat. Our section archives files of all the departments of the Central Tibetan Administration since 1959. My allotted task in the Documentation Section is to review those files and to make them ready for feeding into the database. Besides, I shoulder multi-tasks as receptionist, accountant, e-governance dealing staff, office secretary, handing-taking over of the files from all the Departments, keeping records of the files and many more. While going through the old files of the 1960s and early 1970s stored in the documentation section, I have learned so much from our elder generation, particularly, their traditional way of writings on Tibetan papers (Bhod-Shog) and the way of folding papers. From those old files, I came to realise that our elder generation under the blessing of His Holiness the 14th Dalai Lama had worked extremely hard in the early 1960s and 1970s by setting up Tibetan Government in Exile, establishing Tibetan refugee settlements and schools despite having limited means compared to today. Sometimes, I cannot help but get teary eyes while going through those files that speak volumes of the dedication, loyalty and sincerity of the older generation in the darkest period of exiled Tibetan history.  This alone was enough to empower me to continue serving my community with utmost dedication.

KD: My mother passed away a few months after I was born and I was admitted to Nursery for Tibetan Refugee Children later known as the Tibetan Children Village. Right from the baby home to class XII graduation, I have been brought up under the generous care and affection of Ama Jetsun Pema la and the staff of TCV School. During my schooling days, both the teaching and non-teaching staff would repeatedly remind us of how we are the future seeds of Tibet and the responsibility of liberating Tibet from the Chinese Communist Party (CCP).

In addition, the newly arrived children from Tibet would demonstrate dramas on the brutality of the CCP.  Our devoted staff would also advise us to study hard so as to serve the community. From those influential dramas and the inspirational advice from our devoted staff, I pledged to serve the community after completing my studies. Soon after completing my studies, I applied for the secretary post at TCV but I didn’t get through it due to a shortage of vacancies. In the year 1991, Ama Jetsun Pema la (then) Education Minister, knowing my capabilities in school offered me a job in Central Tibetan Administration and I willingly accepted it and left the job in Nepal (Nepal Currency Rs. 5000 per month) and joined CTA for (Indian currency) Rs. 1100 per month. During the time of my joining, Rangkhung staff had no facilities like staff quarter, medical, provident fund, both the education leave and leave without pay that CTA permanent staff were provided. We had to manage everything within a monthly salary of Rs.1100. Despite the differences, being able to serve in my community itself boosted my morale and gave me so much satisfaction in what I was doing. It wouldn’t be wrong to say that my sincerity and dedication to my assigned work in CTA have made Ama Jetsun Pema la and all the TCV staff feel proud of me because they were my source of inspiration. I shall always remain indebted to them in my lifetime.

KD: I suppose many of us have joined to serve CTA simply induced by our resolve to benefit the Tibetan cause, therefore, we have to work with full dedication regardless of our educational background at this critical time in exile. For instance, I have no special background in accounts but my first posting was accountant-cum-secretary in a Tibetan settlement and that job gave me the needed determination to learn something new in my life. My third posting to a Tibetan Settlement was also as an accountant-cum-secretary and at that time I managed to handle accounting all by myself. On my fifth transfer as a Settlement Officer, I was able to guide the accountants and cleared almost all of the long-time pending audit reports through my past experiences. Also, I have no knowledge of land revenues but the challenges that I faced with land disputes made me study it. Without having any background knowledge on gender, I was assigned as the 2nd Coordinator of the Women Empowerment Desk where I gave a few workshops on gender studies by myself. So to speak, the CTA civil servant should have a firm determination regardless of one’s educational backgrounds to accept whatever job is assigned by the senior authorities, and only then, one will become a versatile and a meaningful civil servant of CTA.

KD: Besides His Holiness the 14th Dalai Lama, Ama Jetsun Pema la and the devoted staff of TCV are my role models. The collective efforts of the TCV staff helped me in becoming what I am today. His Holiness took both the temporal and political power at the early age of 16 during the darkest period of Tibet’s history. Ama Jetsun Pema la in her 20s took over the charge of TCV after the late Chenmo Tsering Dolma la, and devoted her entire life to nurturing thousands of Tibetan refugee children. Back then, a majority of the TCV staff were from Tibet and had first-hand witnessed the forcible occupation of Tibet and therefore were hard-working and dedicated. They all played a crucial role in my life by capacitating me and enabling me to a woman of social service. Like my role models, I too have helped hundreds of Tibetan sisters and brothers in many fields on my personal level.

SME:  What is your piece of advice for young Tibetans serving or wishing to serve at CTA?

KD: For those young Tibetans who wish to serve at CTA, you must take pride in yourself in having the desire to serve your community. If recruited, one must work with diligence without which, I believe the suitcase full of certificates is deemed useless. One has to set a mind to accept whatever job is assigned or wherever they are posted. As for me, I spent my prime youth working in different Settlements taking on various responsibilities even while I was pregnant. I did have a tough time with continuous transfers moving with my kids and belongings because my husband was in the military and it was not easy for him to get leave on time, therefore, I had to manage everything all by myself. I can look back on the ordeal with pride and dignity. Of course, I had to make many sacrifices but I have always prioritised my job above my family and health. I have even been nicknamed a workaholic because of it. But with the blessing of His Holiness the Dalai Lama, I did not face any serious or major health issues. I am now a proud mother of two sons and a daughter. My both the sons are serving at CTA. I have decided to continue my service at CTA as long as my health permits. My piece of advice to the young Tibetans serving or wishing to serve at CTA is they must be mentally and emotionally prepared to make some sacrifices and overcome certain challenges. 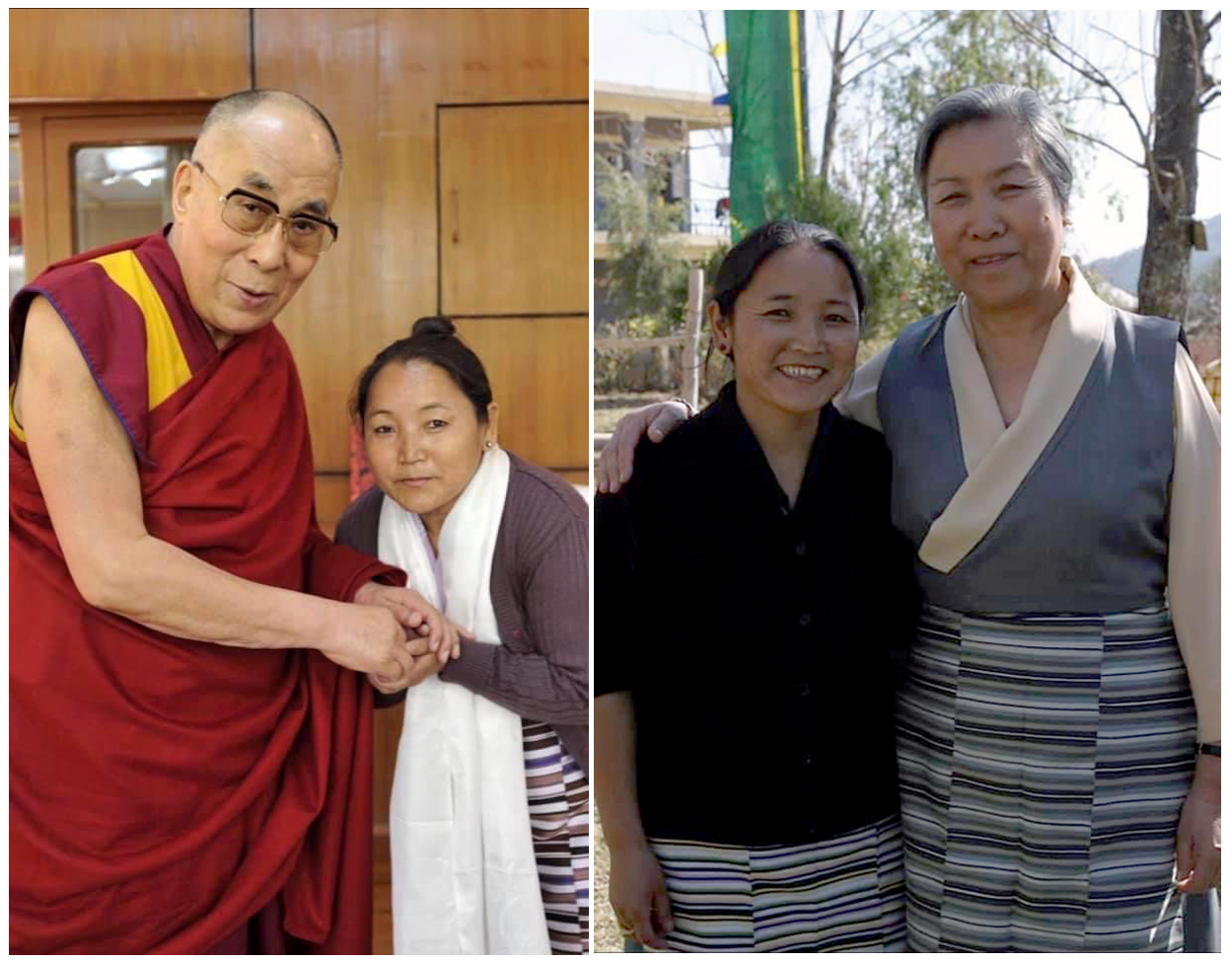 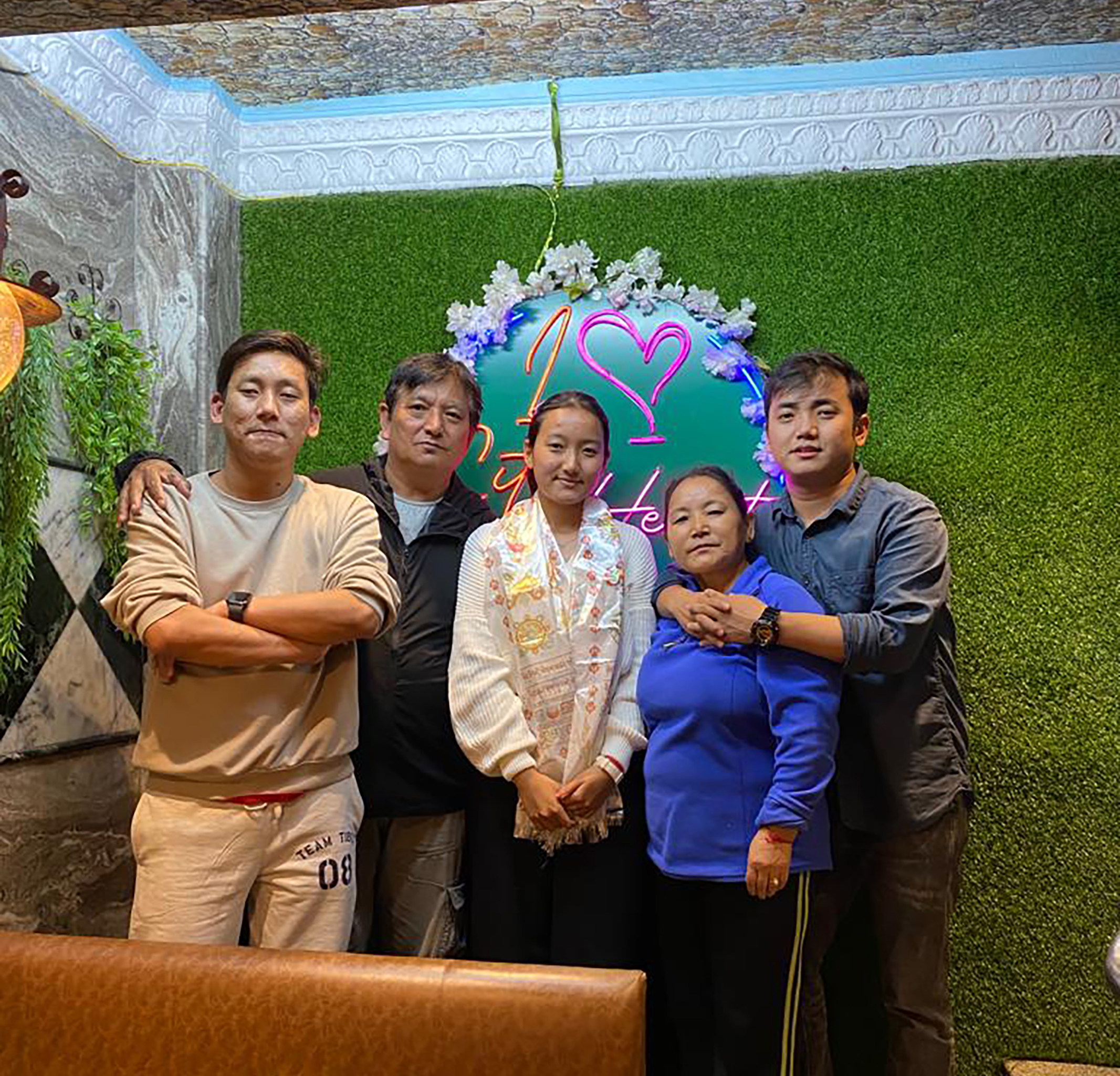 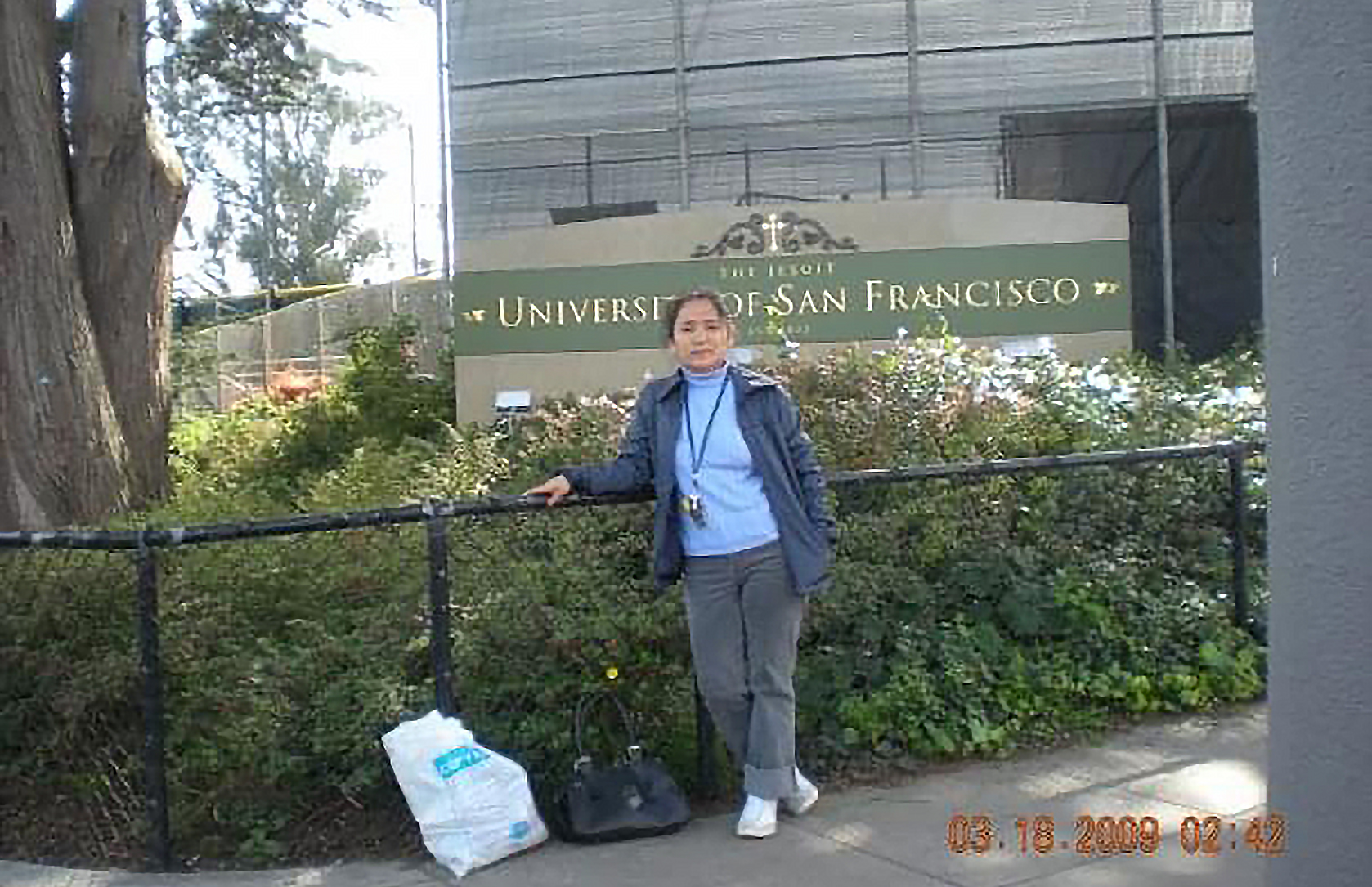 Mrs. Karma Dolma at the University of San Francisco in California, USA, 2009. 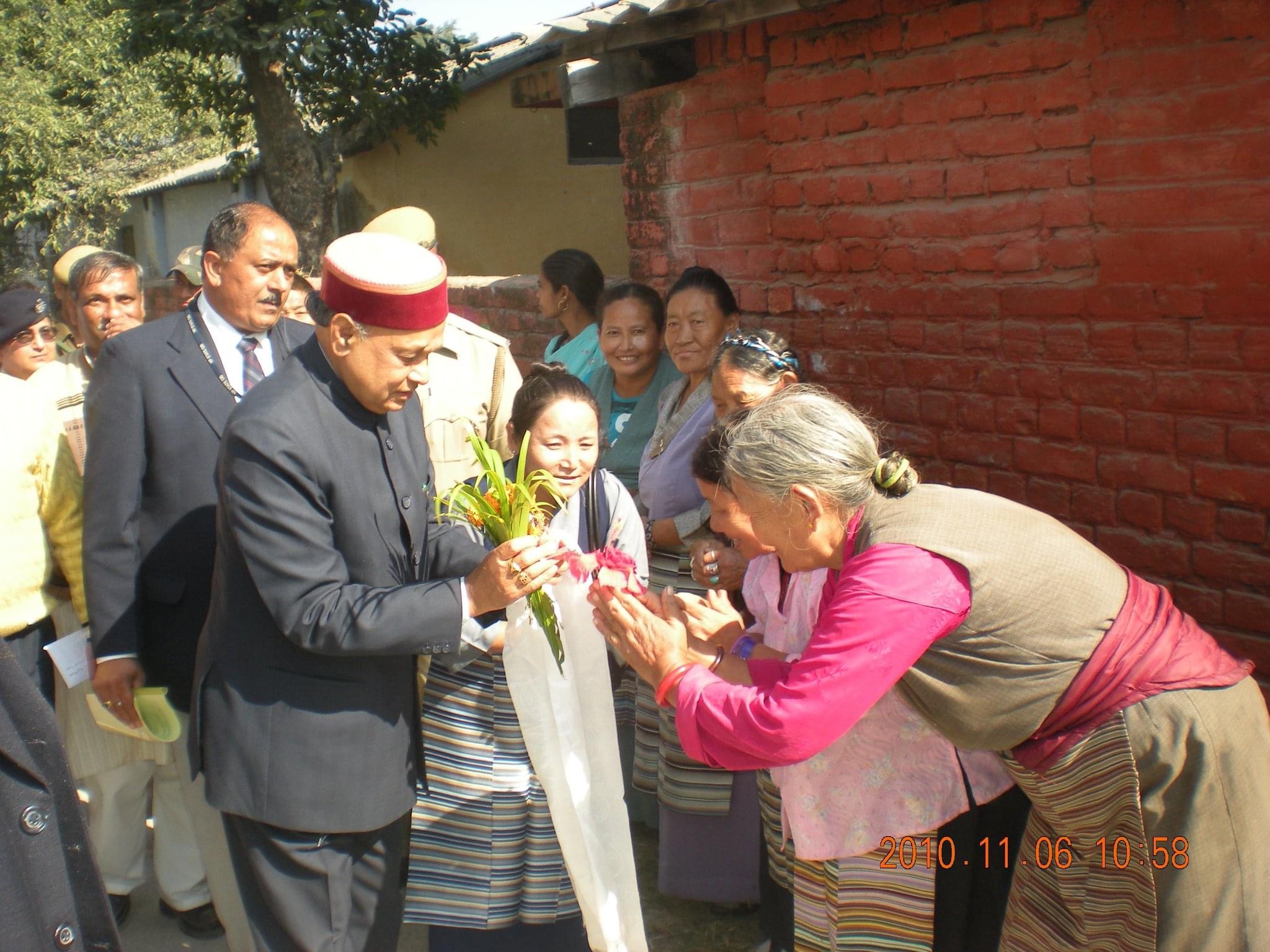 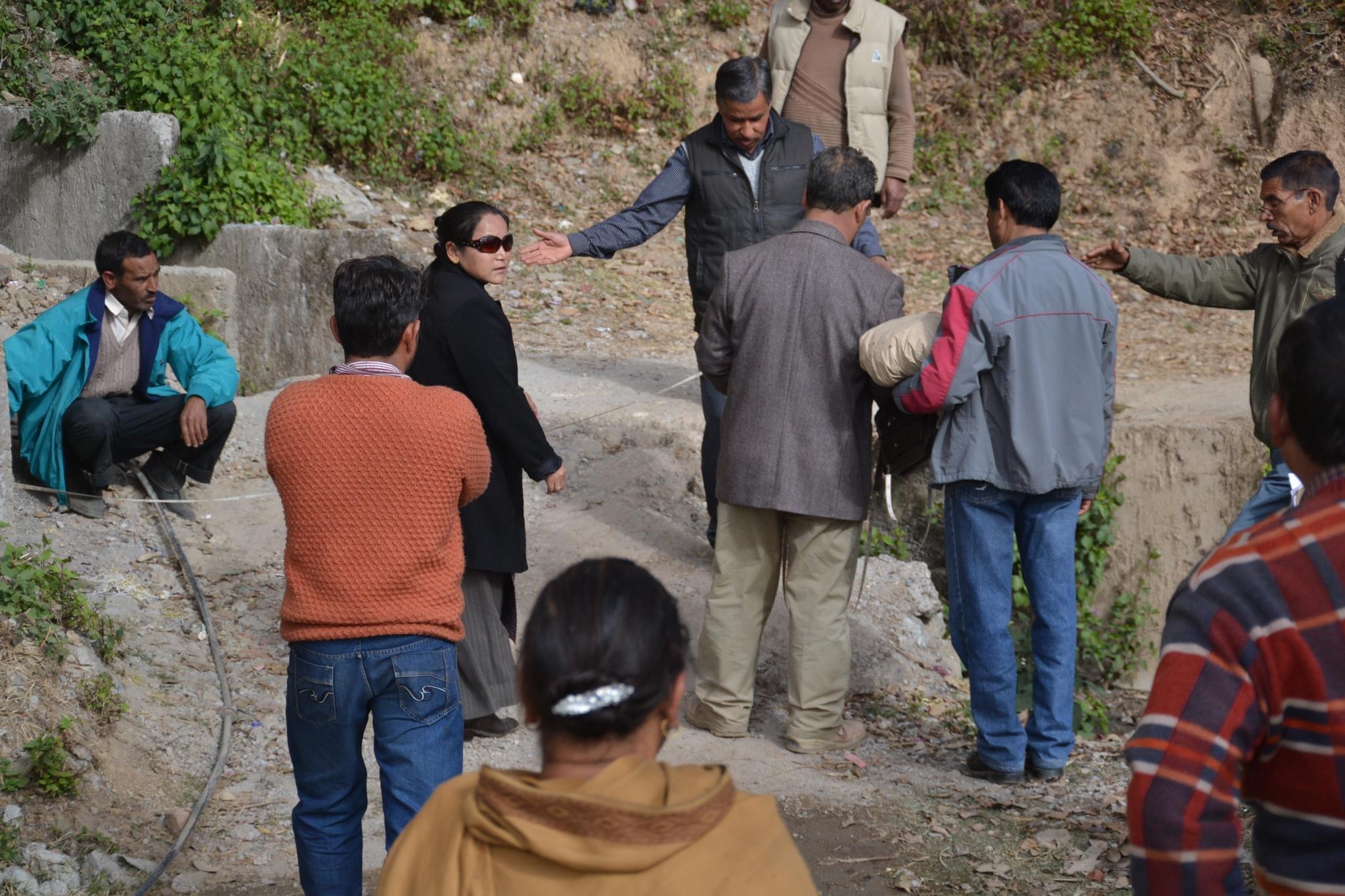 Mrs. Karma Dolma, as an officer of CTA’s land revenue, carrying out the demarcation of CTA’s land boundary below the Nechung Monastery in Dharamshala, HP, India, 2013. 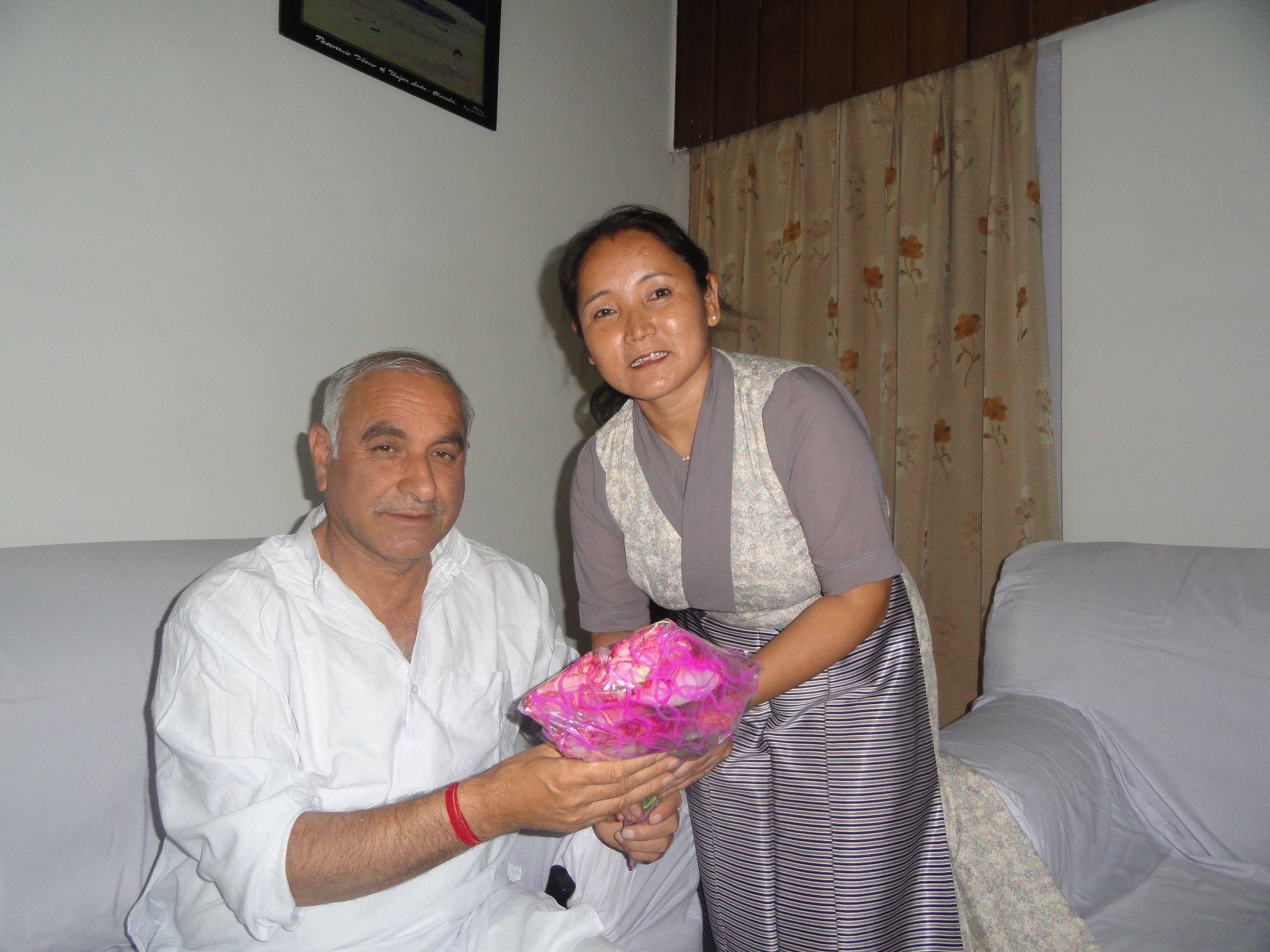 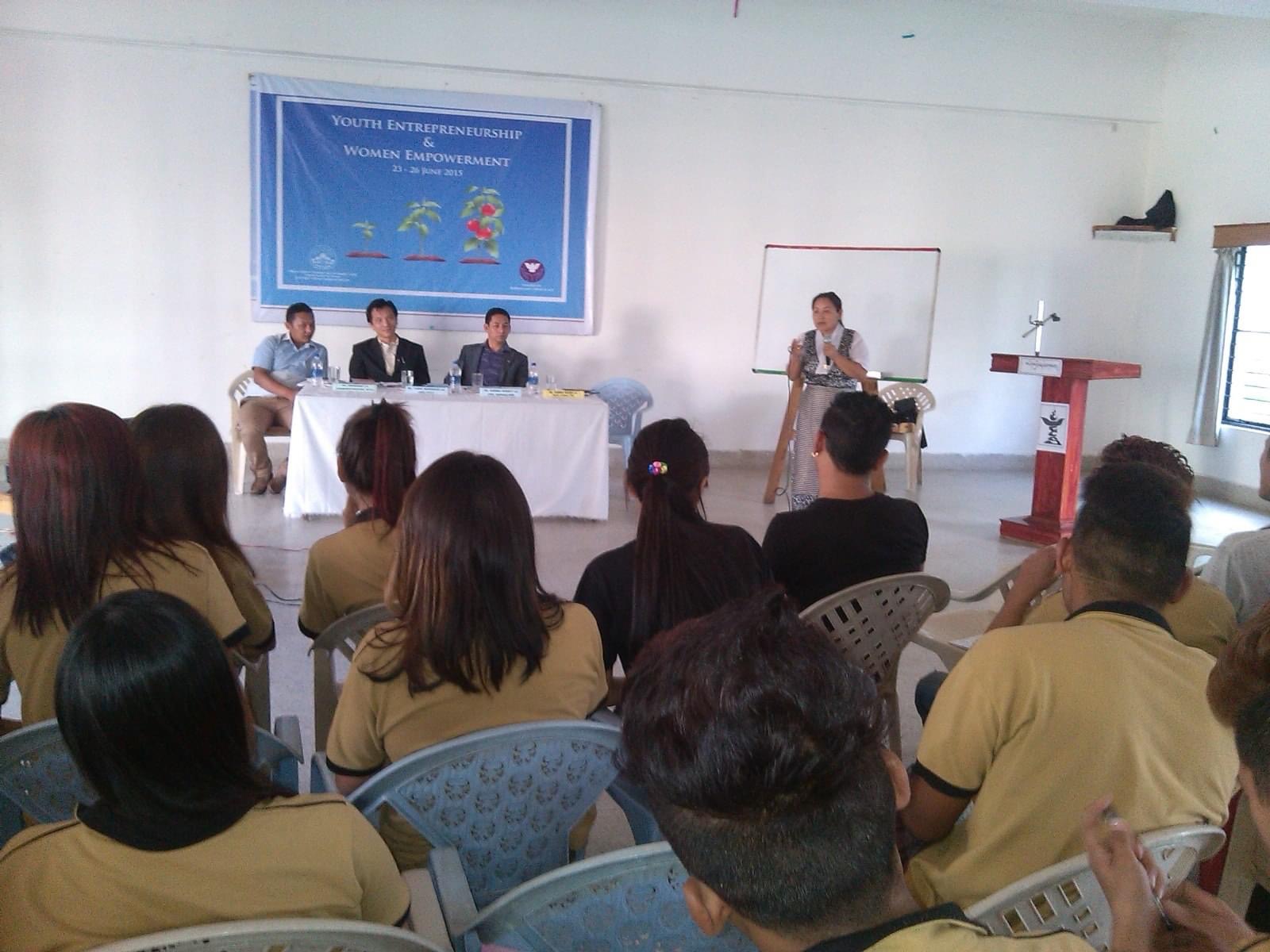 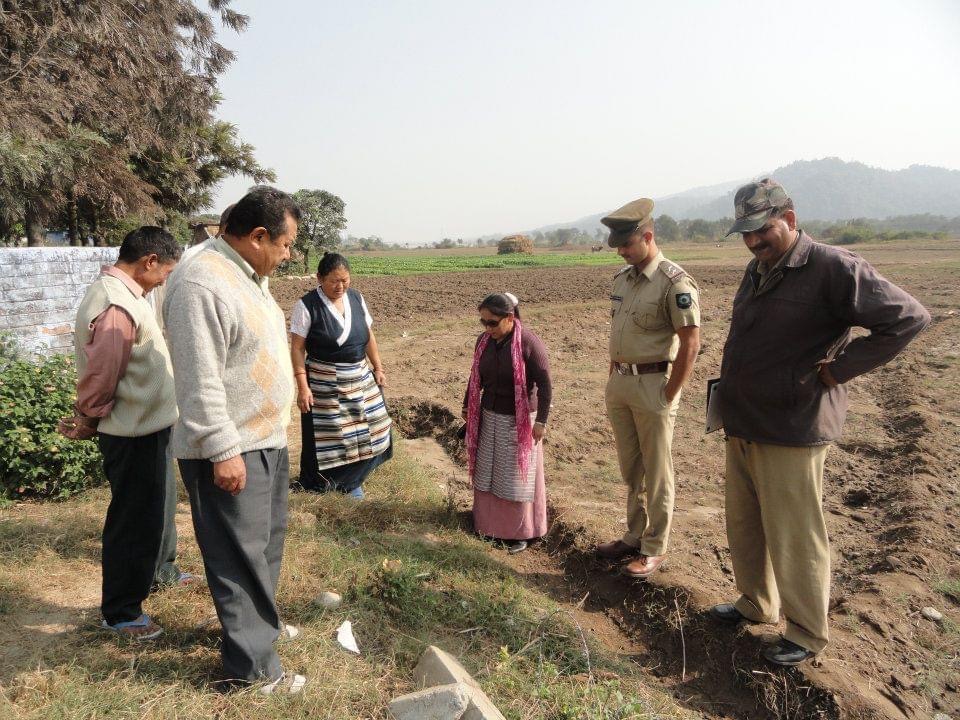 Mrs. Karma Dolma, as the Poanta Cholsum Settlement officer, with the help of Sub-Inspector, Tehsildhar and Patwari solved the boundary dispute with the neighbouring local Indian land. 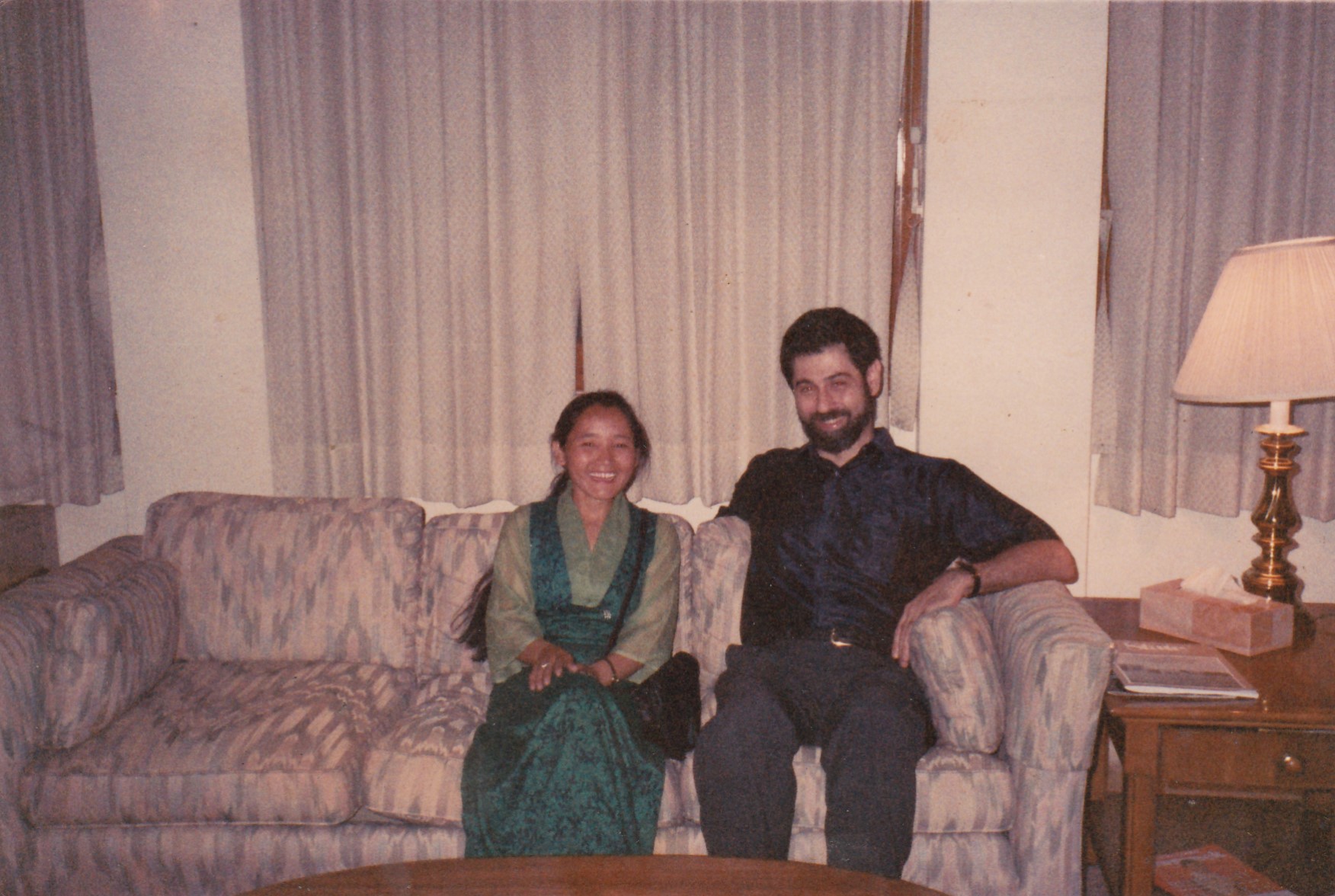 Mrs. Karma Dolma, as an assistant to liaison officer with Mr. André Goodfriend then Counsellor in US Embassy in Delhi, 1993. 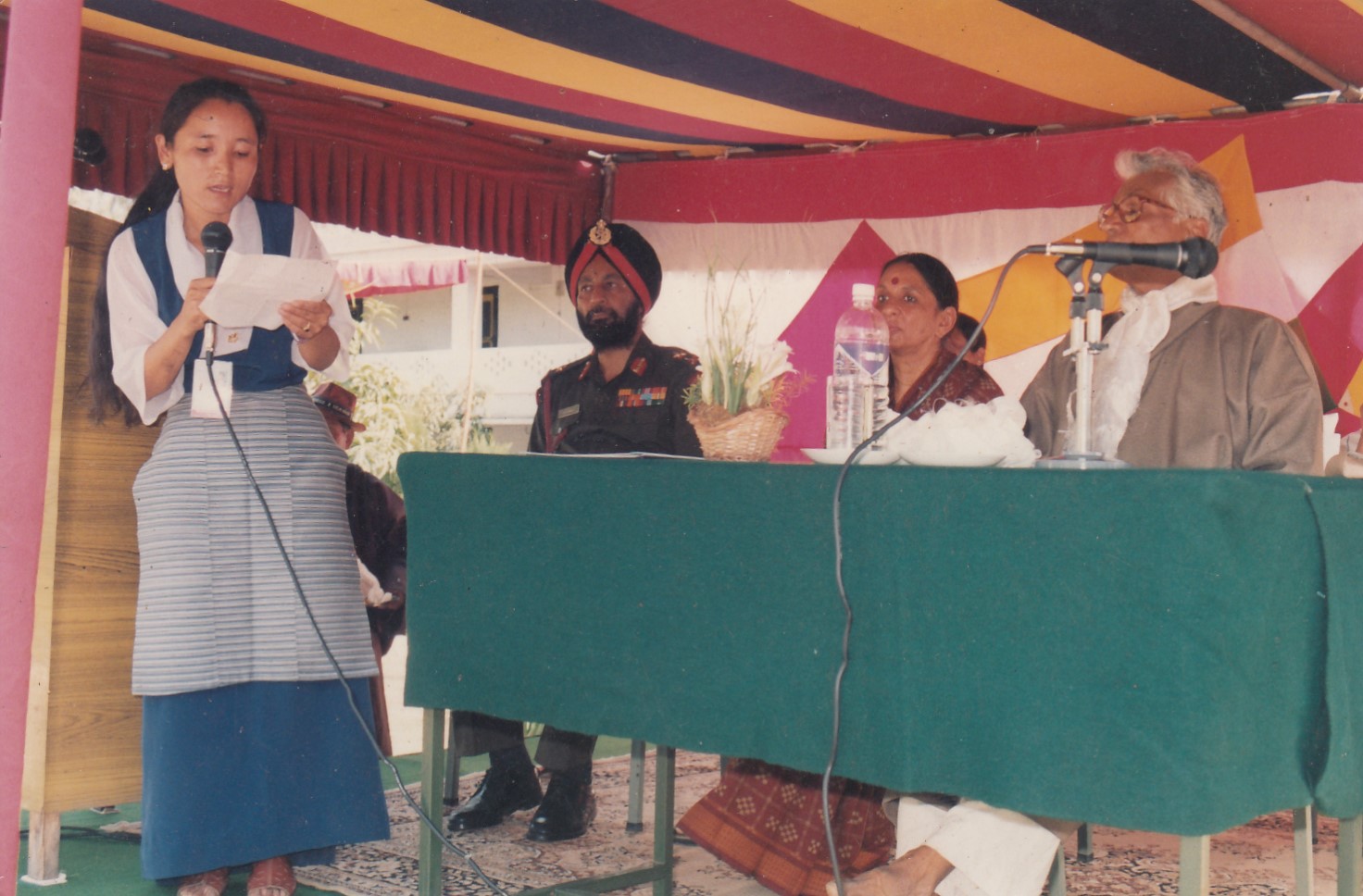 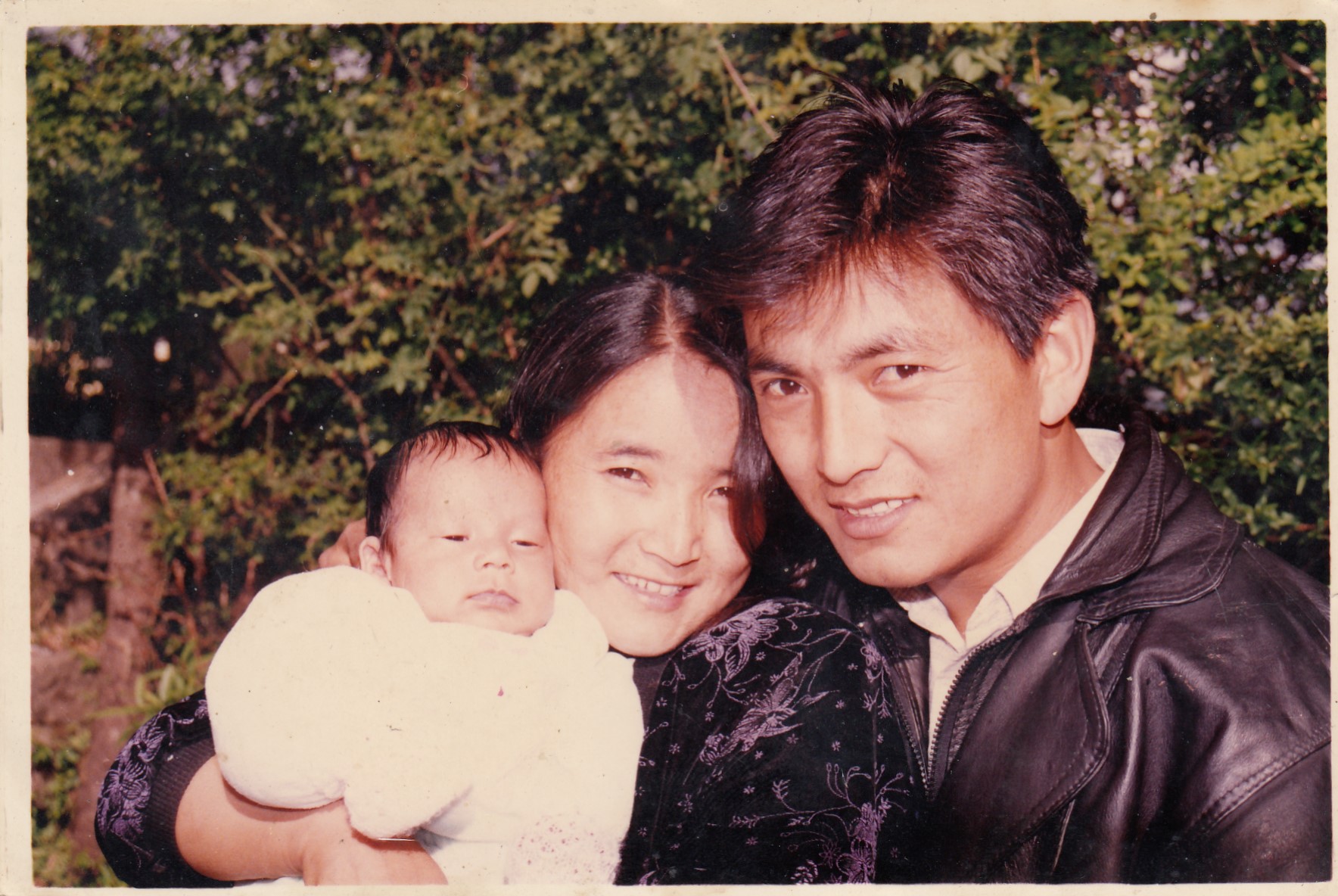 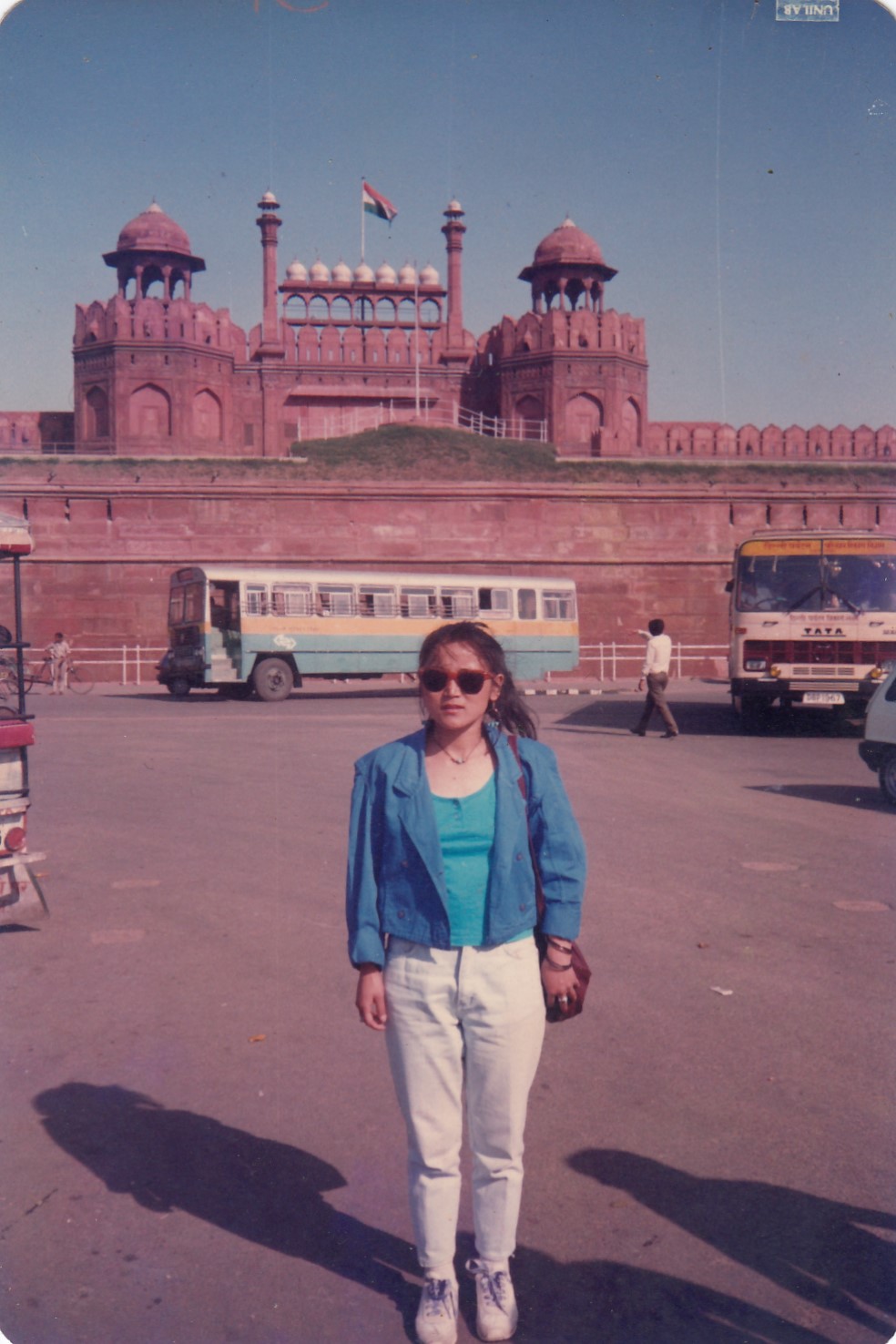 Mrs. Karma Dolma pursing her studies at Delhi Board of Technical Education in 1989.