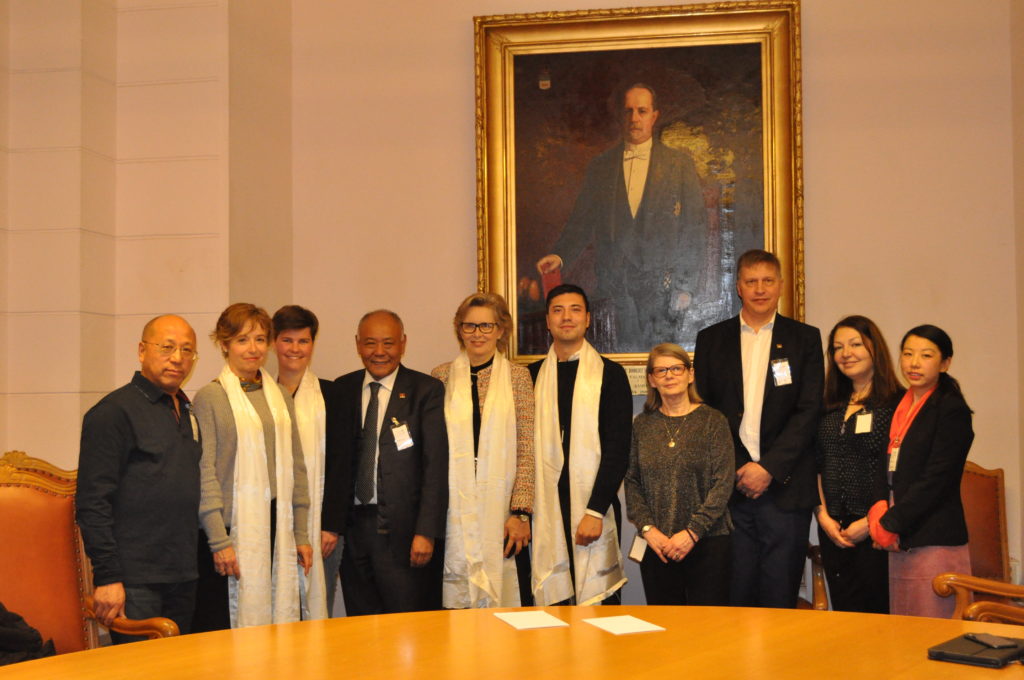 Representative Sonam Frasi with members of the Parliamentary Swedish Tibetan Friendship Association in the Swedish Parliament(Riksdag).

18 January 2020, Stockholm: A meeting of the Parliamentary Swedish Tibetan Friendship Association in Riksdag had been organised on 16th January to coincide with the Stockholm visit of Mr Sonam Frasi, Representative of His Holiness the Dalai Lama for Northern Europe, the Baltic States & Poland.

The meeting was chaired by Margareta Cederfelt MP, Moderate Party, and was attended by Parliamentarians: Charlotte Quensel MP, Sweden Democrats Party; Andreas Lennkvist Manriquez MP and Hanna Gunnarsson MP, both from Left Party. Members from both the Swedish Tibet Committee and the Tibetan community were present at the meeting.

The Representative urged the Parliamentarians to raise these issues in Riksdag and also to make representations on behalf of the Tibetans and freedom-loving citizens to the Swedish government calling on them to encourage resolution of the Tibet issue in their bilateral as well as multilateral dealings with the Chinese government. The Representative also apprised them about the reincarnation of the current Dalai Lama, and how the atheist Chinese Communist Party is trying to control and own the reincarnation system for its narrow political ends.

He urged them to understand the reality of this centuries-old Buddhist culture and to resist China’s attempts to influence their narrative on this important matter. In his concluding remarks, Representative Frasi extended to the MPs an open invitation to visit Dharamsala to see the work being done by the Tibetans in exile in the field of education, cultural preservation and universal responsibility.

It was a very interactive session with the Parliamentarians expressing their views on China’s moves in Europe and on the larger geopolitical forces at play. All the MPs expressed very strong interest in visiting Dharamsala. Only Margareta Cederflt MP has visited Dharamsala earlier, in May 2018. 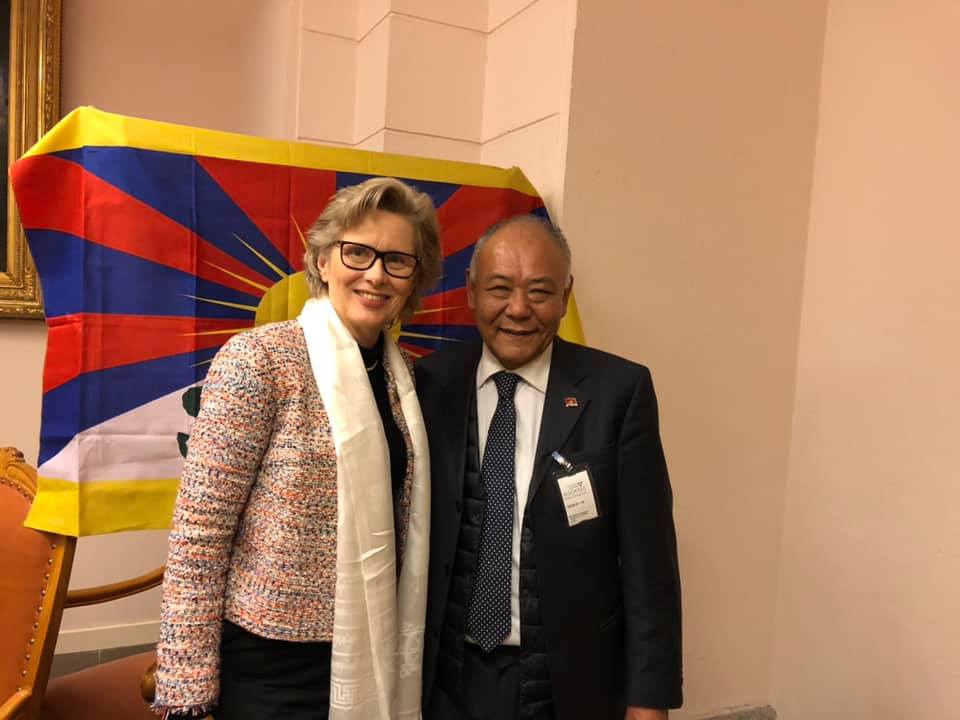 Speaking on the theme: Tibetan Resilience and Lessons for Europe at a public event at Solidaritetshuset, Tegelviksgatan 40, Stockholm, attended among others by the board and members of Swedish Tibet Committee and Tibetans, Representative Frasi mentioned China’s aggressive tactics to not only undermine democracy, liberty and rule of law in the West but to also redefine these in Chinese characteristics; China’s attempts at creating divisions within Europe and in the EU to gain support from European countries for its Belt and Road Initiative; and its repressive policies inside Tibet and in East Turkestan. Talking of resilience in the face of such challenges, Representative Frasi referred to the incredible strong will power of the Tibetan brothers and sisters inside Tibet, the guiding force of His Holiness the Dalai Lama, and the Central Tibetan Administration’s 5/50 strategy.

Following this public meeting, Representative Frasi met with the Tibetan community there at the same venue, where he apprised them about the major meetings held in Dharamsala and the resolutions passed therein. Driving home the importance of preservation of Tibetan language and culture, Representative Frasi encouraged the Tibetan community to hold the weekend Tibetan language classes for Tibetan children.

Among his other official engagements in Stockholm, Representative Frasi held meetings with Representative Mr Daniel Liao of the Taipei Mission to build friendship and cooperation; with representative of SOIR-IM to catch up on their new programs following His Holiness the Dalai Lama’s Malmo visit in September 2018.

On the invitation of the Swedish Tibetan Society, Representative Frasi visited The House of Tibet and had interactions with the board members there. The Society recently held a conference on climate in Stockholm with focus on Tibet, ‘The Third Pole’

To wrap up his visit, Representative Frasi had a dinner meeting with the board members of the Swedish Tibet Committee and Tibetan Community on 17th. He thanked them for facilitating the visit and also encouraged them to network more with Parliamentarians, politicians and the media in their advocacy work.

On 18th morning, he departed from Stockholm to London to complete his three-nation Scandinavia visit. 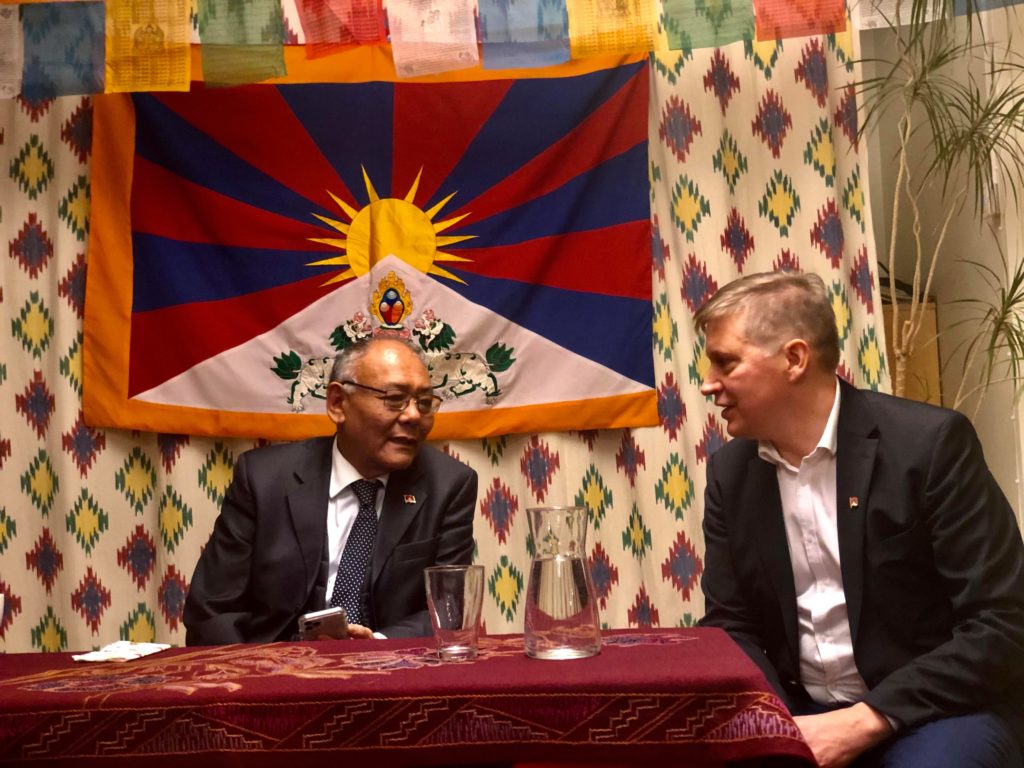 Representative Frasi during his talk on the theme: Tibetan Resilience and Lessons for Europe at the public event at Solidaritetshuset, Stockholm, attended the board and members of Swedish Tibet Committee and Tibetans. 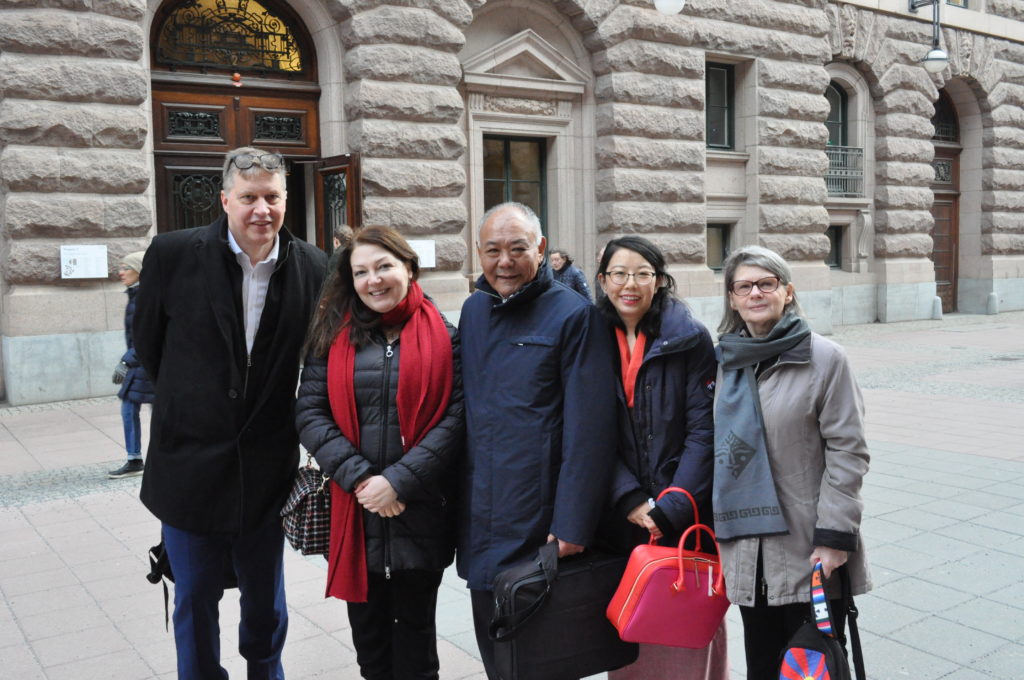 Representative with members of the Swedish Tibet Committee.