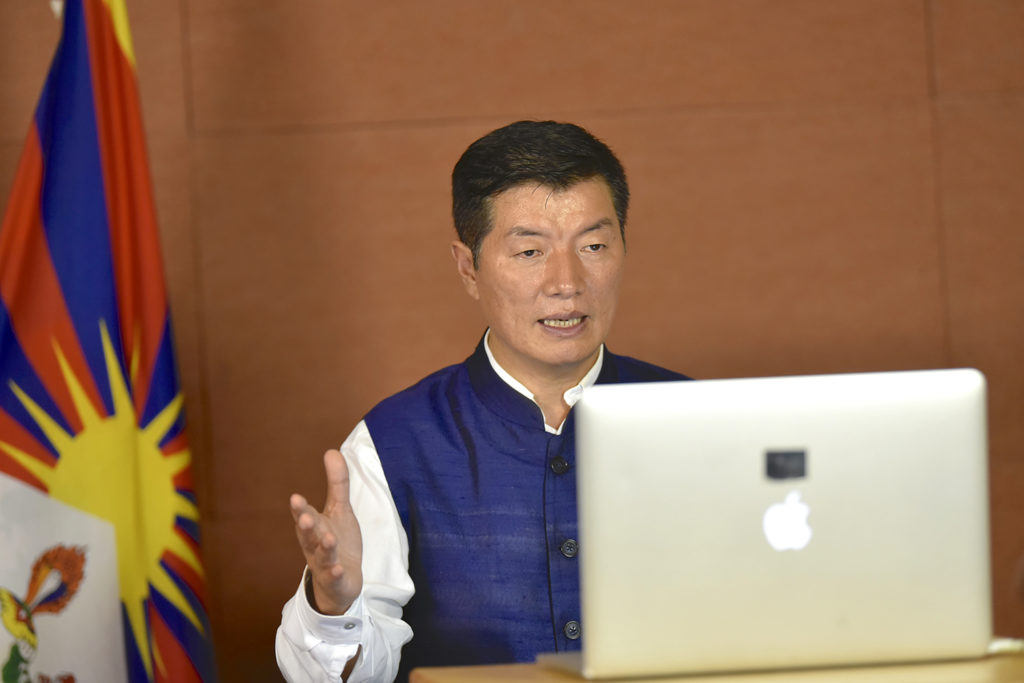 Dharamshala: China’s growing belligerence in these COVID times has pushed governments into rethinking its foreign policy on China. At the core of the brewing tensions between India and China at the Indo-Tibet border lies the Tibet issue. In order to avert a tipping crisis for the two nuclear powers, recognition of the peaceful buffer, Tibet and restoration of its historical status is seen imperative.

The Foundation for Non-violent Alternatives, (FNVA), a non-profit research institute based in New Delhi that studies and analyzes developments in China, the Tibetan plateau and the Himalaya and their implications for India’s security, organised a virtual panel discussion on “Tibet in Sino-Indian Relations – the Need for a Policy Reappraisal” inviting experts such as the democratically elected President of the Central Tibetan Administration, Sikyong Dr Lobsang Sangay, eminent legal advisor and Professor of International Law, Dr Michael van Walt van Praag, and former Governor of Arunachal Pradesh and COAS, Gen. JJ Singh PVSM, AVSM, VSM (Retd.).

“India should save itself, given the reality,” Sikyong Dr Lobsang Sangay said. “If you go by history, all the prime ministers of India except for Shri Lal Bahadur Shashtri, chose cooperation with China over competition with China.”

After so many decades of cooperation, “there is now nothing to show of all the cooperation extended by the leaders.”

He said the lesson, therefore, is very clear that competition is the only way forward with China. “US, European nations, Japan, Australia and other countries are already changing their approach with China from cooperation to competition.” So it’s time India did the same.

Sikyong said the mantra is to verify, verify and verify when it comes to trusting China.

Noting the global significance of India’s stance as a democratic leader, he said, “Countries of the world are looking at Asia to choose a model between the Indian model of development with democracy and of the Chinese model, development without democracy”.

As a “role model for Asia”, he said that India should assert its leadership in defending democracy and win over this ideological war with China. He also cited the recent joint statement issued by an alliance of 63 world parliamentarians against forced labour camps in Tibet.

“I think India should proudly, not just, participate but lead the efforts, form alliances of democracies.”

Thirdly, he suggested that India can also contribute by allowing independent experts and rapporteurs at the UN human rights forums and other agencies to speak objectively on the Tibet issue and human rights violations by China inside Tibet.

Fourth, he proposed that the Government of India accord the sentiments of the Indian people and petitions of 200 Indian MPs from across party lines, and confer the Bharat Ratna on His Holiness the Dalai Lama.

He also stated that as per His Holiness’ commitment to revive ancient Indian tradition, the reestablishment of Nalanda institute in Bodhgaya would draw Buddhist followers around the world to India and revitalise India’s status as the cradle of Buddhist civilisation.

On the ongoing border tensions between India and China, Sikyong said that India’s concession of the 2000 sq km of Tibet was “in fact the core issue which China has taken further ahead to pursue expansionist aims into Indian territory”.

Former Governor of Arunachal Pradesh and COAS, Gen. JJ Singh, detailing the historical and geopolitical context he presented an overview of how the relationship had evolved over the centuries. 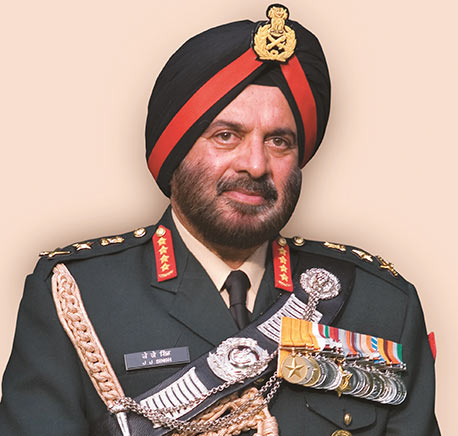 Gen J.J.Singh essentially concluded that “Tibet is the core issue between China and India and not so much the boundary because if Tibet is not handled well by China, they blame India for interfering”. However, the natural affinity which Tibetans and Indians share is based on centuries of cultural and trade ties and can not be done away with.

“Tibetans had their own law, currency etc and had no interference in four decades” till the 1940s when China got their independence and sought to “liberate” Tibet with a heavy hand-making Tibetans feel the authority of China. The world wants Tibet to have independence or fully autonomous existence with minimum interference by China, as also expressed by His Holiness the Dalai Lama.”

He added, “India and China have to find a way to coexist and forge developments that help the millions of the underprivileged and disadvantaged in both their countries instead of seeking to be a hegemony.”

In his over half-hour presentation titled, “Younghusband’s Expedition to Present Day Tibet: a Historical and Geopolitical Perspective”, the General laid out the historical context, describing the dynamic shared by Tibet-India from the spread of Buddhism which Tibet adapted into a distinct Tibetan Buddhism that spread further into China and Mongolia which bound Tibet with the two countries in a priest-patron relationship as their teacher.

The existence of peace treaties signed between China and Tibet in 783 and 821 AD, which resulted in the demarcation of the Tibet-China border. Noting that “geostrategic compulsions which forced China to adopt an aggressive posture to annex Aksai Chin firstly and now claiming Arunachal Pradesh as South Tibet,” he pointed out that this renaming is not supported by any factual evidence.

From a geostrategic perspective, he said, “the British raj had been keen on ensuring that besides itself no other powers should gain control of Tibet in order to protect its trade interests and Tibet’s proximity to Calcutta, except for the British.”

“The British policy on Tibet swung from non-interference or indifference towards internal affairs of Tibet and to sometimes it was to build cordial relations with Tibet to enhance the empire’s trade. At other times, the British dealt with Tibet as if it was an independent entity, sometimes as if it was a country under Chinese suzerainty.”

“International power play and Britain’s agreements on power, trade and influence sharing with Russia, China, France and Japan and the impact of events in Tibet and developments in Afghanistan, Persia, Mongolia and Southeast Asia” exploited Tibet. 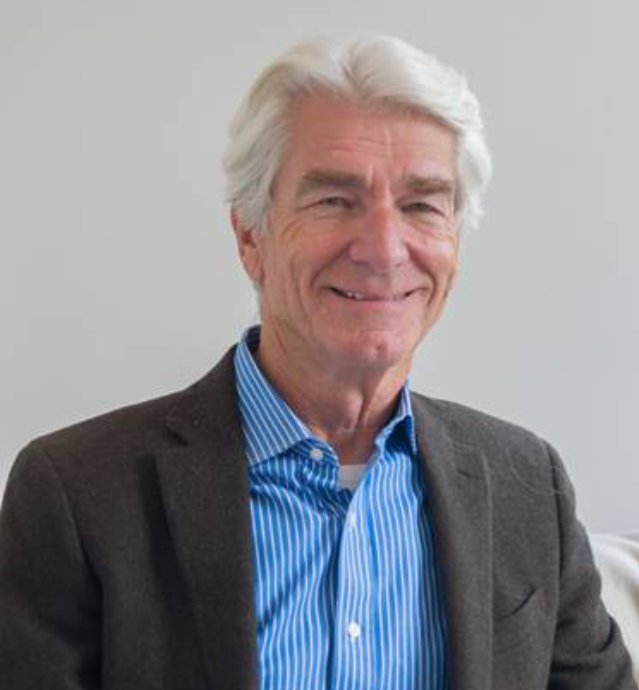 Dr Michael van Walt van Praag, eminent legal advisor and Professor of International Law, speaks on the need of a principled policy at the online discussion titled ‘Tibet in Sino-Indian Relations – the Need for a Policy Reappraisal’ organised by FNVA, 22 September 2020. Photo/File image

He stated “the formulation of policies on Tibet must be based on two pillars of 1) principles and appreciation of the true nature of presence in Tibet on the one hand and 2) the relationship between the presence and Beijing’s ambitions and behaviours elsewhere in the region.

By neglecting its moral as well as legal obligations to recognizing China’s forceful and illegal occupation of Tibet, and looking the other way is what has emboldened Beijing govt to assert expanding territorial claims and influence, he noted.

Based his 10 years of extensive research which he and his colleague undertook through engagement with over 100 scholars starting with the rise of models of Genghis Khan eight centuries ago which is exactly the period Beijing claims Tibet first became part of China, Michale said none of the claims PRC made regarding its alleged historical sovereignty over Tibet holds water. These conclusions were all corroborated by contemporaneans, Tibetan Mongolian and Chinese sources.

The complete analysis is contained in the ‘Tibet Brief 2020’ which is currently in production and will be available by November this year.

‘China’s occupation of Tibet violates fundamental international norms which rules against a territory seized by force’, he stressed. Not only a moral duty but a legal obligation for governments to not accept forceful acquisition of territory.

He noted that India’s treaty relations with Tibet are particularly important because it recognises Tibet’s status of statehood and international treaty-making capacity citing the Simla Agreement of 1914.

He asked the likeminded countries to take cues from Czech political leaders who have for long advocated principled approach to China, Tibet and Taiwan and most recently, the Speaker of the Czech parliament who visited Taiwan, graced the Taiwanese parliament and expressed his and the Czech people’s support for Taiwan.

“Beijing immediately threatened punishment but was swiftly rebuffed not only the Czech foreign ministry but by Germany and France as well,” he said, adding “This is truly signs of new times.”

“This is, therefore, a unique opportunity to launch a new, bold and principled Tibet policy and engage others to do the same. Time infact is therefore now,” he said as he concluded.

The event is part of a series of online discussions organised by the FNVA on topics of utmost significance to India in its strategic discussions with its neighbours.