Dharamshala: President Dr Lobsang Sangay of the Central Tibetan Administration inaugurated a photo exhibition on the life of Ngawang Dorjee, a Russian-born Buddhist scholar and an envoy of the great 13th Dalai Lama, at the Tibet Museum on 9 June.

“Ngawang Dorjee was a seminal figure in the Tibetan political history, particularly in the early 20th century. His extraordinary contribution as one of the authors of the Tibet Mongolia Treaty signed on 29 December 1912 and most importantly, he was one of the Tibetan representatives who signed the treaty that declared the Tibetan and Mongolian independence from the Qing government and severed all political relations with China,” President Sangay, said in his inaugural address.

“An outstanding Buddhist scholar and a close associate of the great 13th Dalai Lama, had worked tirelessly for Tibet, Mongolia and as a result, cemented a strong spiritual friendship between the three Buddhist countries: Tibet, Russia and Mongolia in the 1900s,” he added.

Ngawang Dorjee, also called Agvan Dorjiev (1854–1938), was a Russian-born monk of the Gelug school of Tibetan Buddhism, referred by his scholarly title as Tsenyi Khempo. He was one of the seven dialectical instructors or Tsanzhabs to the great 13th Dalai Lama and was pivotal in building communications between Lhasa and the Russian Czar.

He is also remembered for building the Buddhist temple of St. Petersburg in 1909 and signing the Tibet-Mongolia Treaty in 1913.

Tarba Lama, President of the Agvan Dorzhiev Foundation, spoke on how Ngawang Dorjee secured support of the Tsar to build Buddhist monasteries in Russia and his boundless contribution to the rich culture and spiritual history of Russia.

Secretary (equivalent) Dhardon Sharling, Department of Information and International Relations delivered the vote of thanks.

Agvan Dorjiev, also known as the Sokpo Tsеnshab Ngawang Lobsang (literally Mongolian Tsenshab Ngavang Lobsang) to the Tibetans, played a significant role in maintaining the Tibet-Russia-Mongolia relationship. Being an emissary to the then 13th Dalai Lama he was one of the few people who signed the peace treaty between Mongolia and Tibet in the year of 1913. In 1901 Tsanshab Ngawang Dorjee, appointed by the 13th Dalai Lama as Tibet’s Special Envoy, was received by Tsar Nicholos II at St. Petersburg. According to Odessa News Report, “Agvan Dorjiev’s visit (to the capital of Russia) was aimed at furthering the goodwill between Russia and Tibet, and on the agenda of the talks with Russian Foreign Minister was the question of establishing a permanent Tibetan Mission in St. Petersburg”. In 1905 the construction of the Buddhist Temple (named Kun-tse-Chos-Ling Datsang) was started in St. Petersburg with major financial contribution from the 13th Dalai Lama and it was consecrated by Tsanshab Ngawang Dorjee on August 10, 1915, when the Tibetan national flag was hoisted in the capital of Russia along with flags of Russia and Mongolia.

The day-long exhibition was organised by the Tibet Museum, DIIR. 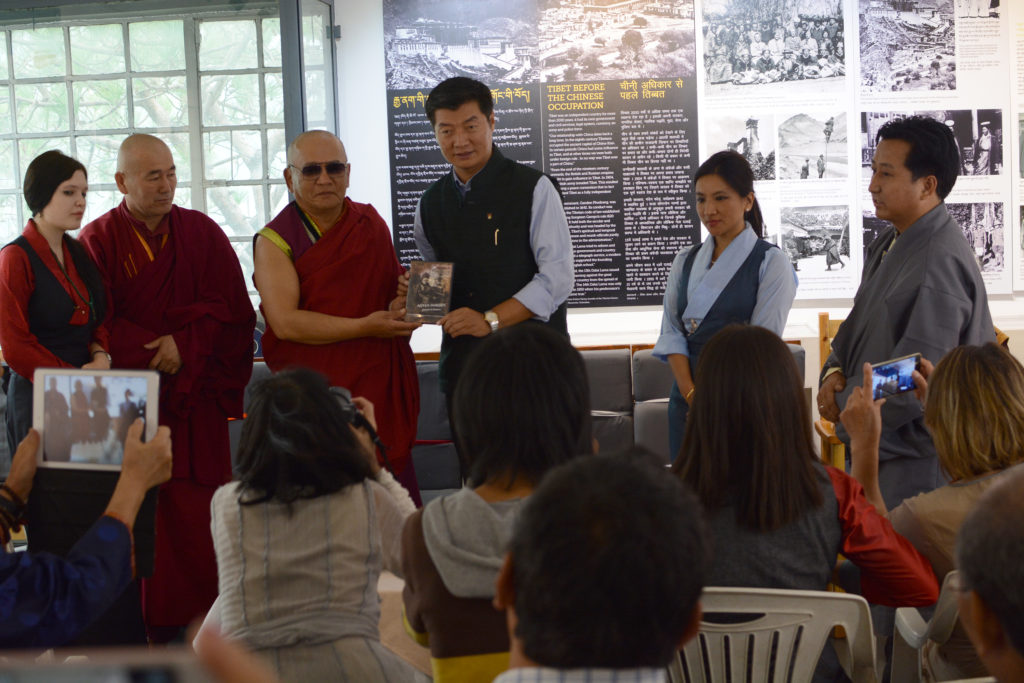