The world in recent times has witnessed China’s attempts to derail democracy or even a semblance of it across its empire. Even the lip-service to words like ‘liberty’ and ‘freedom’ is out the window with the Communist Party of China’s obsession for absolute control. Their fear and intolerance towards diversity pervade the religious persecution and cultural genocide of Tibetans within Tibet, which is being carried out unabashedly.

“On behalf of the CTA and the Tibetan people, I want to express my deepest gratitude to the Chairs of the Congressional-Executive Commission on China and to all the co-sponsors for introducing the Tibet Policy and Support Act of 2019. This legislation sends a powerful message of support for the Tibetan people and sheds clear light on the repressive policies and hostile intent of the Chinese government in Tibet. I hope this legislation will deter the Chinese government and officials from carrying on with their hard-line and counterproductive policies in Tibet and move them towards dialogue and a peaceful resolution of the Tibet issue,” said President (Sikyong) Dr Lobsang Sangay. 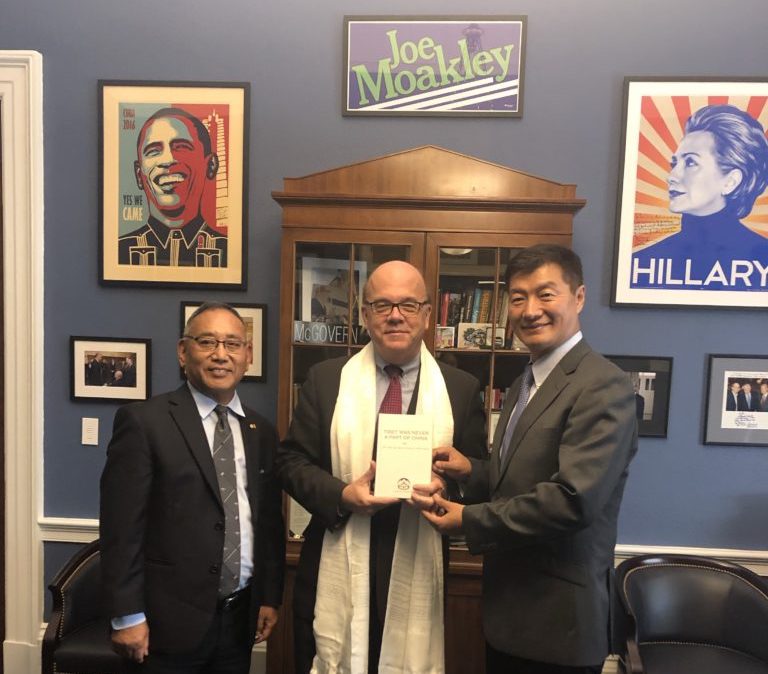 The bill is a landmark show of support by the US to the Tibetans and sends out a clear message of deterrence to China which plans to meddle with the ‘spiritual traditions and practices of Tibetan Buddhism’. The bill categorically states that interference of the People’s Republic of China in decisions regarding His Holiness the Dalai Lama’s reincarnation would amount to violation of the fundamental religious freedoms of Tibetan Buddhists and the Tibetan people. It further calls for sanctions against any Chinese government official who are complicit in identifying and installing His Holiness the 15th Dalai Lama against the Tibetan Buddhist traditions.

One of the major tasks undertaken by His Holiness the Dalai Lama on arrival into exile was the democratization of Tibetan polity which led to the establishment of three pillars of democracy- the Tibetan Parliament-in-Exile, the Kashag (Cabinet) and the Tibetan Supreme Justice Commission. In 2001 His Holiness called for first direct elections of the Kalon Tripa (now Sikyong), executive head of Central Tibetan Administration (CTA) and later in 2011 transferred all the political authorities to a democratically elected head of CTA.

The bill not only enumerates this chronology but also commends the efforts of His Holiness the Dalai Lama, CTA and the Tibetan community in exile for establishment of self-governing democratic system with free and fair elections across the exile community.

Even in the field of negotiations on Tibet, the bill recognizes CTA’s role and Middle Way Approach, the official policy of CTA seeking genuine autonomy for the six million Tibetans in Tibet. As a matter of policy, the bill calls upon the President and the Secretary to encourage China to enter into unconditional dialogue with His Holiness the Dalai Lama or his representatives or the CTA representatives.

The bill also recognizes the efforts of exiled Tibetan communities settled in South Asia for the preservation of culture, religion and language and directs for developmental assistance for the sustainability of these settlements.

The bill recognizes the key role of Tibetan plateau, often called as the third pole, in determining global climate change. The change in temperature of Tibetan plateau impacts the glaciers, the monsoon cycle and the flow of rivers. Around 1.8 billion people are dependent on the freshwater supplied by the Tibetan rivers. But the so-called developmental activities by the Chinese government including the continuous damming of the Tibetan rivers for the Chinese hydroelectric power, the continuous diversion of rivers and the coerced resettlement of Tibetan nomads who often play the role of environmental stewardship have led to environmental degradation of the Tibetan plateau.

To promote access to Tibet as enumerated in the Reciprocal Access to Tibet Act, 2019, the bill mandates for the establishment of US Consulate in Lhasa, the capital of Tibet. Until such establishment, the bill mandates the creation of a separate Tibet section at the US Embassy in Beijing which shall monitor the political, economic and social development in Tibet. As a matter of policy, the bill calls upon the Secretary to not authorize any new Chinese consulate in the US.

Tibetans, friends of Tibet, and supporters of democracy and human rights will be rooting for the passage of the Tibetan Policy and Support Act of 2019 into law.

Sikyong urges the support of senior Republican Senator Lindsey Graham, Senator Dianne Feinstein and Senator Tom Cotton for the Tibet Policy and Support Act of 2019 in a series of high-level engagements in the US earlier this month.