Written in English by Paul Eckert for Radio Free Asia. 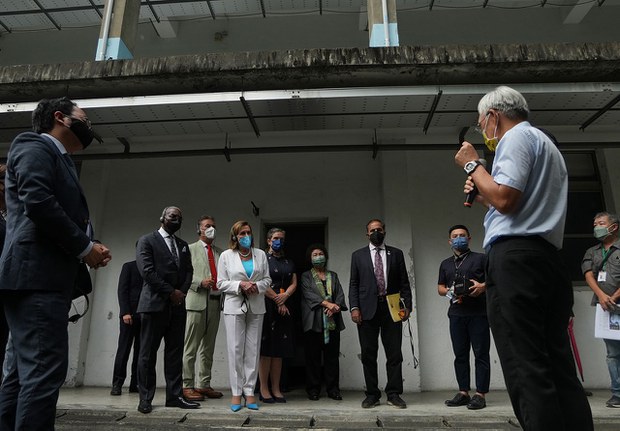 U.S. House Speaker Nancy Pelosi wound up her visit to Taiwan in a symbolic meeting with rights activists, from former political prisoners from Taiwan’s authoritarian past to Chinese pro-democracy leaders and members of the beleaguered Uyghur and Tibetan ethnic minorities.

In her meetings at Taiwan’s National Human Rights Museum, built at the site of a notorious jail and military court from Taiwan’s dark era of martial law, she contrasted the now-democratic island’s willingness to address its past with the Chinese Communist Party’s (CCP) extensive suppression of historical debate.

Participants told RFA she also stressed the need to bolster Taiwan that was a theme of her public remarks and published statements during the 20-hour visit, which China harshly condemned and launched war games and threatened a missile barrage and blockade of the island.

“We cannot stand by as the CCP proceeds to threaten Taiwan — and democracy itself,” she wrote in an op-ed published in the Washington Post as she arrived in Taipei during a Congressional tour of Asia.

She was given a tour of the museum’s Jingmei White Terror Memorial Park, commemorating Taiwan’s 38-year period of brutal martial law under the Nationalist Party, by Chen Chu, chairwoman of Taiwan’s Human Rights Council who was once a political prisoner held and tried in that facility.

“Our delegation visited the National Human Rights Museum with ex-political prisoners: a tribute to the heroes who suffered and fought for Taiwan’s democracy,” Pelosi tweeted. Another tweet showed her in tears after hearing stories from former prisoners.

She also met Wuer Kaixi, an ethnic Uyghur and prominent student leader of the 1989 Tiananmen Square protests, Lam Wing-kee, a Hong Kong bookseller forced out of business and into exile in Taiwan, for books critical of the Chinese Communist Party (CCP), and Lee Ming-che, a Taiwanese activist who was jailed for five years in China.

The rights forum also included Kelsang Gyaltsen, the Dalai Lama’s representative in Taiwan, and Yang Xianhong, director of the Taiwan Coalition for Human Rights in China.

Participants in the meeting said she highlighted the differences between Taiwan’s democracy and the dictatorship in China and the threat authoritarianism posed to free societies.

“She said that she came to Taiwan and came to this forum to express her support for Taiwan’s freedom and democracy. She hopes that we can talk to young people about human rights in China,” said Lee.

Lee was released in April after serving five years in jail for “subverting state power” for his NGO work assisting the families of Chinese political prisoners.

Noting that Pelosi has been a critic of Chinese human rights practices for most of her 35 years in Congress, he said “she believes that China’s human rights and rule of law have moved increasingly backward in recent years.”

Lee said he told Pelosi of his concerns about abusive Chinese practices including “residential surveillance in a designated location” under which political prisoners are detained in secret for a long time, and heavy surveillance of images after they serve their terms.

Lam, the former manager of Hong Kong’s Causeway Bay Bookstore who was secretly kidnapped by the CCP, told RFA that Pelosi spent a lot of time focusing on the understanding of young people in Taiwan on the issues of mainland China, Hong Kong and Tibet.

He said he told Pelosi that many young people in Hong Kong cannot leave the city, move abroad or obtain residency status overseas and called for help in allowing imperilled Hong Kong democracy protesters to emigrate.

The Taiwan representative of the Dalai Lama as well as Tibet’s government-in-exile, Kelsang Gyaltsen, told RFA that he informed Pelosi that the human rights situation in Tibet is getting worse and that the CCP’s totalitarian dictatorship is getting more and more extreme.

He said he highlighted Chinese assimilation policies in which boarding schools provide meals, housing and free tuition to draw Tibetan children to schools, away from their parents, culture and religion.

For former Tiananmen pro-democracy leader Wuer Kaixi, deputy secretary-general of the Taiwan Legislative Yuan Human Rights Promotion Association, “her trip itself is one very, very loud message” that repudiates years of U.S. policies aimed at bringing China into the world system through trade and engagement.

“On the other hand, it made China more greedy. And then, they [China] feel they are invincible and that the whole world will give in to whatever they do,” added Wuer Kaixi.

I think the sacrifices of the Uyghur people and the resilience fighting from Hongkongers, Uyghurs, Tibetans and the Chinese democracy movements have also made the United States realize that the previous China policy is not working for them.” he added.