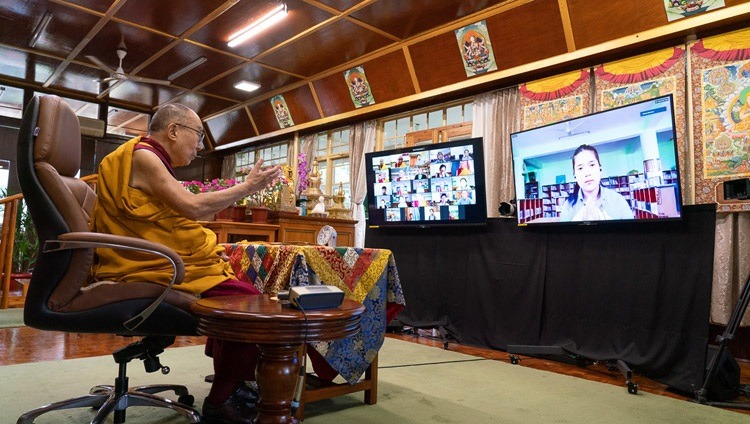 His Holiness the Dalai Lama answering a question from a young Tibetan during the second day of teachings by video link from his residence in Dharamsala, HP, India on August 5, 2020. Photo by Ven Tenzin Jamphel/OHHDL

Thekchen Chöling, Dharamsala, HP, India – His Holiness the Dalai Lama greeted his audience of young Tibetans with a brisk, “Tashi delek,” this morning. He began his discourse with the observation that the philosophical view of Buddhism is dependent arising and its conduct is non-violence, not harming others and, if possible, offering them help. These two themes can contribute to bringing peace to the world.

“Whatever exists is dependent on other factors. If you’re happy, the atmosphere around you will be cheerful. And if the environment in which you live is peaceful, you’ll be content. Since we don’t want to experience suffering, it’s appropriate that we do others no harm. The philosophical view I mentioned and this code of conduct correlate with each other. I recommend you keep this Buddhist view and conduct in mind.

“As I often say, to achieve world peace, we need peace of mind within ourselves. What disturbs our peace of mind are our destructive emotions. Those who concern themselves predominantly with material development, think of happiness and well-being only in terms of physical health and yet our mental health is crucial too. Ancient Indian tradition acquired a rich understanding of the workings of our minds and emotions and we can still call on this knowledge today.

“After he had attained enlightenment, the Buddha declared:

Profound and peaceful, free from complexity, uncompounded luminosity —
I have found a nectar-like Dharma.
Yet if I were to teach it, no-one would understand,
So, I shall remain silent here in the forest.

“We can understand the words, ‘profound and peaceful’ to refer to the first round of the Buddha’s teachings in which he revealed the four noble truths. ‘Free from complexity’ indicates the perfection of wisdom of the second round. ‘Uncompounded luminosity’ relates to the content of the Buddha’s third round of teachings, especially Buddha nature and the ‘Tathagatagarbha-sutra’.

“During the second round he dealt with the object clear light, which refers to emptiness, while in the third round he alluded to the subjective clear light, the mind of clear light. The Jonangpa’s teaching about ‘other emptiness’ and tantric references to whitish, red and black appearances relate to this.”

His Holiness discussed the Buddha’s natural truth body and wisdom truth body that are only accessible to him, but from which manifest the complete enjoyment body and the emanation body that are intended to be of benefit to sentient beings. He then mentioned the lines of salutation from Dignaga’s ‘Compendium on Valid Cognition’. 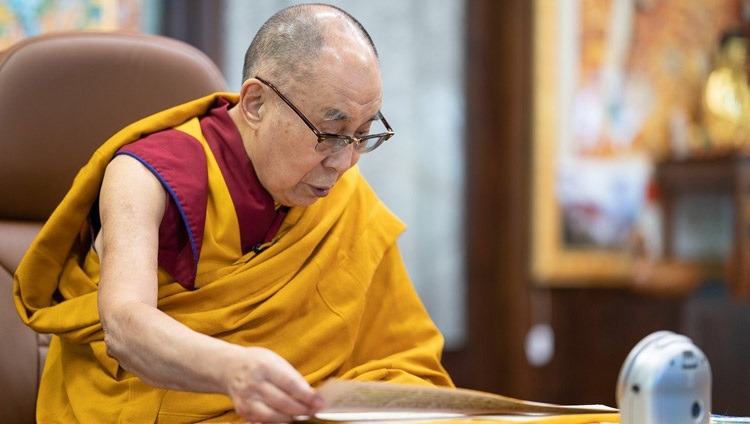 His Holiness the Dalai Lama reading from Tsongkhapa’s “In Praise of Dependent Origination” on the second day of teachings for young Tibetans by video link from his residence in Dharamsala, HP, India on August 5, 2020. Photo by Tenzin Phuntsok/OHHDL

I prostrate to he who became valid
who aspired to work for the benefit of wandering beings
the Teacher, the Sugata, the Protector.

He remarked that we can understand that the Buddha is a reliable teacher by examining the quality of what he taught.

He added that in his work ‘Destiny Fulfilled’ Jé Tsongkhapa noted that some people in Tibet have said that the texts on logic and epistemology bear no relation to the attainment of enlightenment. However, Manjushri encouraged Dignaga to continue his composition because it would be of great benefit in the future. When Shantarakshita came to Tibet he emphasised the importance of applying logic and reason.

Jé Tsongkhapa went on to clarify that the lines of salutation from Dignaga’s ‘Compendium on Valid Cognition’ above are explained by Dharmakirti in his ‘Commentary on Valid Cognition’ in sequential and reverse order. They confirm that we can understand that the Buddha was a reliable teacher by scrutinizing his teaching. His Holiness pointed out that of all Buddhist traditions, only Tibetan Buddhism makes rigorous use of reason and logic.

His Holiness mentioned the verse in Chandrakirti’s ‘Entering into the Middle Way’ and references to it in his auto-commentary that chide Vasubandhu, Dignaga and Dharmapala for misunderstanding Nagarjuna’s intention. Because they failed to grasp the actual meaning, they were alarmed by his words and rejected his world-transcending teaching.

Terrified by the blinding colour of the utterly vast ocean of Nagarjuna’s wisdom,
some have shunned and kept their distance from this most wonderful tradition.
Yet moistened by the dew, these stanzas opened like the buds of water lilies.
Thus, the hopes of Chandrakirti have now been realized. 11.54

“In the past, Sera, Drepung and Ganden became the main centres of learning in Tibet employing reason and logic,” His Holiness continued. “These institutions have been re-established in South India and the tradition goes on. I’m pleased to say that the monks and nuns there are studying science too. 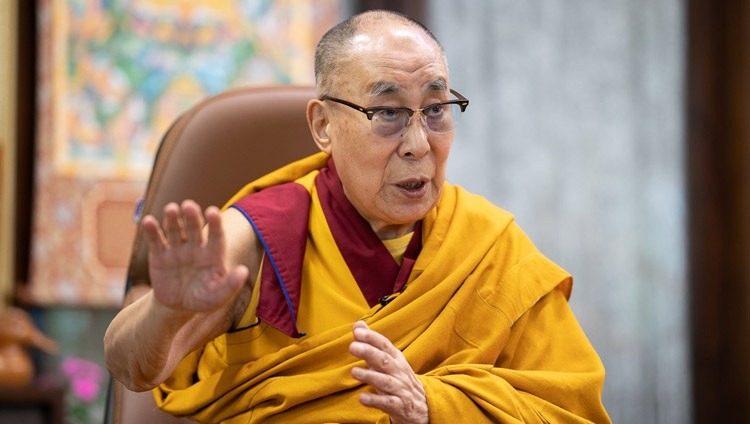 His Holiness the Dalai Lama answering a question from a member of the virtual audience on the second day of teachings for young Tibetans by video link from his residence in Dharamsala, HP, India on August 5, 2020. Photo by Tenzin Phuntsok/OHHDL

“There is also an organization of concerned people from the Himalayan region who have pledged to transform the monasteries and nunneries under their care into centres of learning.

“When Shantarakshita was establishing Buddhism in Tibet, he emphasized the importance of logic and the Middle Way view, but it seems that many Tibetans at the time were more interested in tantra. Nevertheless, he provided us with a model that has shaped our tradition and for which we should be grateful.

His Holiness took up the text where he left off yesterday. Verses 9 and 10 praise dependent arising as the heart of the teaching, the peerless way to ascertain emptiness. He mentioned an image conjured up by Jamyang Shéba, Ngawang Tsondru of two lions linked or crossed at the neck representing the Middle Way (Madhyamaka) and the Consequentialist (Prasangika) traditions. It can be found in his ‘Great Treatise on Tenets’, where he refers to pairs of scholars — Shantarakshita and Kamalashila, Vimuktisena and Haribhadra, Buddhajnana and Jetari, and so forth.

His Holiness quoted Aryadeva’s observation that ignorance of reality permeates all mental afflictions just as a sense of tactility pervades the body. By destroying ignorance, the mental afflictions are eliminated. Then he cited a verse from Chandrakirti’s ‘Entering into the Middle Way’:

Seeing with wisdom that all afflictions and all faults
stem from the sense of identity grasping at the perishable collection,
and knowing that self is the focus of this sense of identity,
the yogi engages in the negation of selfhood. 6.120

His Holiness read steadily through the verses, commenting here and there. He compared lines from verse 19, 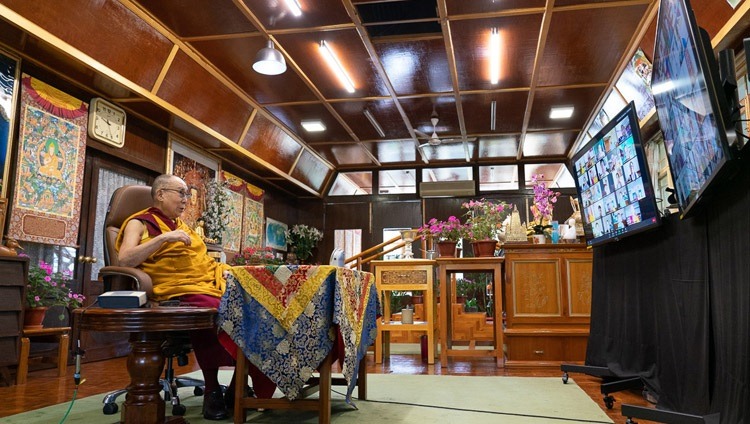 His Holiness the Dalai Lama speaking on the second day of teachings requested by young Tibetans from his residence in Dharamsala, HP, India on August 5, 2020. Photo by Ven Tenzin Jamphel/OHHDL

“It is through the reason of dependent origination
That one does not lean towards an extreme;”

with lines from the ‘Three Principal Aspects of the Path’:

He stopped at verse 30, which states, ‘Through this very path of dependent origination, convictions arise in me too’.

Questions were put to His Holiness today by students from Bangalore TCV College Hostel and TCV School, Chauntra. In answering them he confirmed that when competition results in benefit for all concerned, rather than in victory for one and defeat for everyone else, it can be regarded as healthy.

He suggested that when facing criticism, it is worth considering if it is justified. If it’s your laziness that is being challenged that’s what to address by studying harder. If it is unjustified, it’s better to feel compassion for the critic. He told another student who wanted to know how to avoid feeling demoralized that the practice of bodhichitta is about helping others. This can include resisting those who obstruct your efforts to serve others. Having a sense of confidence and pride in the thought, “I can do this, I can learn how to do this,’ is important. He added that Tibetans in general have every reason to be proud of the Nalanda Tradition that has been kept alive in Tibet. Moreover, he said, there are no other refugees like Tibetans, who have not only preserved their culture, but have found ways to use it to help others. 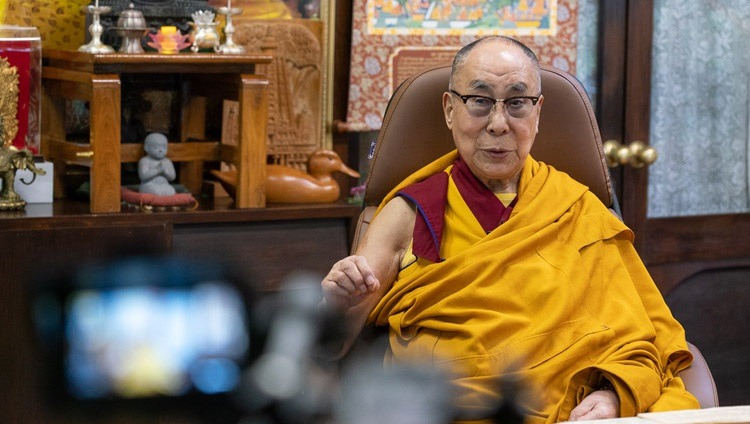 His Holiness the Dalai Lama speaking on the second day of his teachings for Tibetan youth by video link from his residence in Dharamsala, HP, India on August 5, 2020. Photo by Ven Tenzin Jamphel/OHHLD

Asked to define happiness, His Holiness observed that it can be understood in terms of physical things and in terms of the mind. People in the modern world tend to look to physical things in search of satisfaction, while paying little attention to the pleasures of the mind. Hermits up in the hills, on the other hand, face a degree of physical hardship, but having peace of mind are content. He quoted verses from ‘Guide to the Bodhisattva’s Way of Life’.

Why say more? Observe this distinction: between the fools who long for their own advantage and the sage who acts for the advantage of others.

For those who fail to exchange their own happiness for the suffering of others, Buddhahood is certainly impossible — how could there even be happiness in cyclic existence?

“As human beings we are social animals,” His Holiness added. “If we’re affectionate and compassionate to others, we’ll be happy and successful. We may be refugees, but we’re still able to pray, ‘May all sentient beings be happy and free from suffering’.

“If you’re thinking of your next life or the attainment of enlightenment when you’re being kind to others — that’s religious ethics. But if, when you’re helpful and of service to others, you’re mainly thinking of everyone being happy here and now, that’s secular ethics. Because fields are where we grow crops, we take care of them. Just so, because we depend on the people around us, we need to take care of them too. Remember compassionate, non-violent conduct in the context of everything being dependently arisen.

“Thank you — see you tomorrow.”