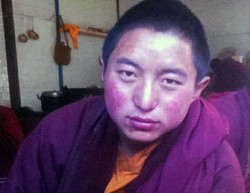 DHARAMSHALA: A 17-year-old Tibetan monk was arrested by Chinese authorities in Kardze County following a peaceful protest against the Chinese government, according to media reports.

The monk, Pema Dorjee, from Za Gonsar monastery, allegedly marched into the streets of Kardze calling for the return of His Holiness the Dalai Lama to Tibet and raised slogans for his long life.

Authorities arrived at the scene barely a few minutes into his protest and beat him severely. He was critically injured before he was formally detained, a source was quoted as saying.

It is not known where he is currently detained.

Pema Dorjee, a native of Zakhog, Derge in eastern Tibet, is a son of Lhagya and Meyang.