Ulaanbaatar, Mongolia: His Holiness the Dalai Lama’s 85th anniversary was celebrated widely in Mongolia, with many religious and public organizations taking an active part in actual and online festive events.

The program at Bakula Rinpoche Betub Monastery which lasted for six hours started as early as 2:30 am. His Holiness the 14th Dalai Lama’s life story was read at the monastery as well as auspicious verses. This was followed by Buddhist teachings and mandala offering.

To celebrate His Holiness the Dalai Lama’s 85th birthday as widely as possible Diluv Hutugthu Foundation purchased a license to show a new documentary “Dalai Lama the Scientist”  by Dawn Engle that tells the incredible story of the Dalai Lama’s lifelong journey from the world of Buddhism into the world of modern science.  The film was translated into Mongolian.  The Dilav Khutagt Foundation, in cooperation with the Mongolian National Public Television, screened the “Dalai Lama the Scientist” on July 6, 2020 at 9:00 pm and on July 7, 2020 at 9:00 am. According to MNB’s outreach prediction, an estimated 800,000 to 1 million people watched “Dalai Lama the Scientist” on July 6th and 400,000-500,000 viewers across the entire nation watched it on July 7th. The total outreach of the film is about 1,5 million people.

The Dilav Khutagt Foundation in cooperation with the Mongolian National Public Television, screened the “Dalai Lama the Scientist” on 6 and 7 July 2020.

The documentary was also screened on the Mongolian National Public Television’s Facebook page, with a total of 30,000 views, 612 shares, and 64 comments. 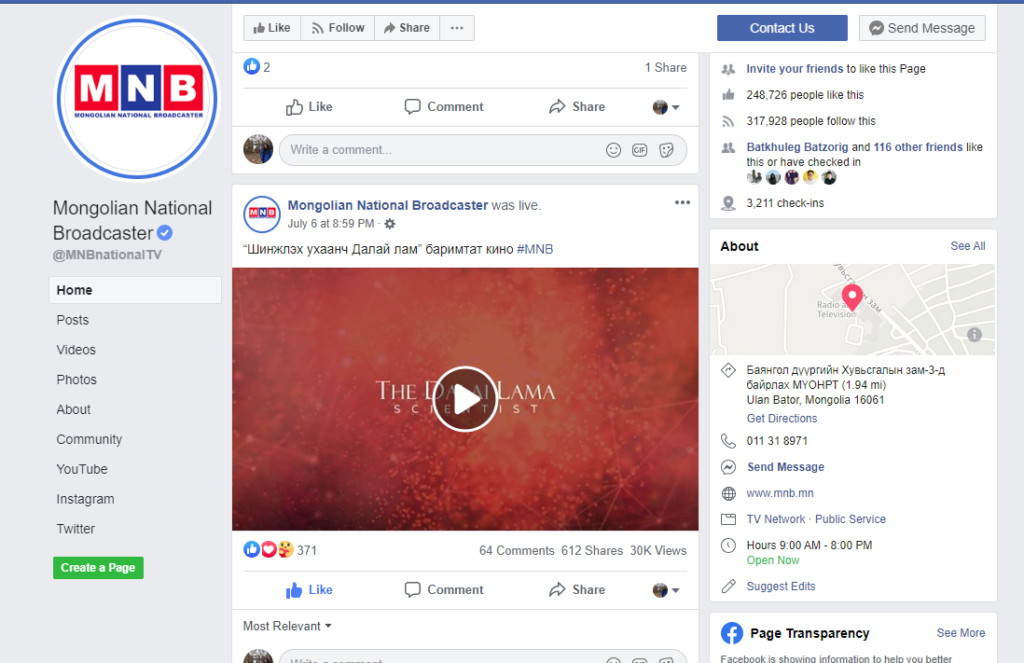 His Holiness the Dalai Lama’s 85th birthday message was released live in Mongolian on Dalailama.mn Facebook page with a total of 28,000 views, 988 shares, 248 comments and 1100 likes.

Gavj Otgonbayar gave a 70-minute interview on the biographies of all thirteen previous reincarnations of the Dalai Lamas as well as a remarkable life story of the current reincarnation, His Holiness the 14th Dalai LamaTenzin Gyatso. The program was viewed by 3,200 people and shared by 43 people. 14 people shared their opinions and 168 people liked it.

His Holiness the Dalai Lama talk and short teaching being broadcast reached over 2,000 people.

“Buddha Production” also showed footage of the opening ceremony of the Mongolian Battsagaan Temple at Bodhgaya which H.H. The  Dalai Lama visited and blessed in 2017. The program was viewed by 1,700 people.

A total of about 7 hours of live streaming was made available to the public on the Buddha Production Facebook page.

As part of the “Hot meal” program, 36 children from target groups and female-headed households have been provided with monthly meals on a regular basis this year which was earlier announced as a year of gratitude to His Holiness the Dalai Lama. Diapers and gifts were given to 10 infants born in the women’s prison. Sanitary facilities were provided to 260 women in women’s prisons. These include soaps, shampoos, etc. Sanitary supplies were donated to 36 children in the juvenile detention center.