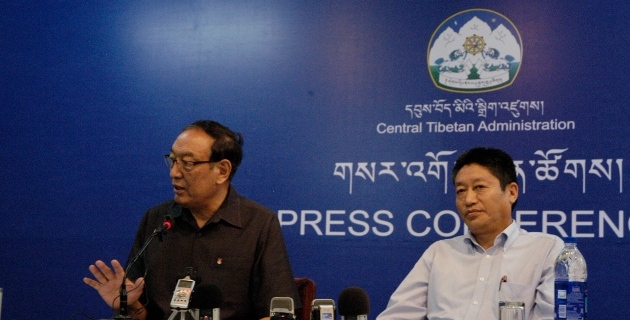 On 8 May 2012, His Holiness the Dalai Lama gave an interview to the Sunday Telegraph in Dharamsala, India, during which the interviewer commented on the security surrounding His Holiness. In response, His Holiness remarked that the concerned security agencies have taken his security very seriously ever since his first arrival in India. He mentioned that some time ago the officials responsible for his security received reports from a Tibetan working for the Chinese security establishment inside Tibet that Tibetan women were being trained to poison him by applying poison to their hair and to traditional greeting scarves. When His Holiness meets with Tibetans, they often present him with such scarves and bow their heads to receive his blessing. However, His Holiness also made it quite clear to the interviewer that there is no way to verify such reports. Although His Holiness takes security threat to his person lightly, there are a variety of threats to his well-being that the security agencies are obliged to take it seriously.

According to reports received from Tibet in June 2010, Chinese intelligence agencies are making concrete plans to harm His Holiness by employing well-trained agents, particularly females. It is also learnt that they are exploring the possibility of harming him by using ultra-modern and highly sophisticated drugs and poisonous chemicals. In another report received in October 2011, it is also learnt that Chinese intelligence agencies have stepped up their clandestine efforts to collect intelligence on the status of His Holiness’s health, as well as collecting physical samples of his blood, urine and hair. They are reportedly co-opting Tibetans inside Tibet to visit India with the intention of seeking an audience with him to this end.

In early April 2008, Zhang Qingli, the then Party Secretary of the Tibet Autonomous Region (TAR) held a meeting of all top officials in the government. During that meeting, he quoted as saying, “those who must be killed should be killed and those must be imprisoned must be imprisoned.” Recently in February 2012, Chen Quanguo, the current Party Secretary of TAR, called for “a war against secessionist sabotage”.

In recent years, Chinese government has launched an unprecedented offensive campaign against His Holiness inside Tibet and has also issued instructions to its concerned officials to organise protests by overseas Chinese communities against the Dalai Lama during his visits outside India. A number of such protests have since been organised in the United States, Europe and Japan.

His Holiness’s efforts to reform and democratise Tibetan society have also emboldened certain fundamentalists within the Tibetan community. This relates to differences arising from the worship of the Shugden spirit, which His Holiness had advised the Tibetan people from worshipping against. The primary group among these fundamentalists is the Dorje Shugden Devotees Charitable and Religious Society (DSDCRS), founded in May 1996 with its headquarters in Delhi, India. The supporters of DSDCRS are perhaps the most violent group. The Indian police have identified and charged DSDCRS of murdering three monks close to His Holiness, including his Chinese translator. This triple murder occurred in Dharamsala, India, very close to His Holiness’s personal residence in February 1997. A Red Corner Notice was issued by Interpol in June 2007 for the arrest of two of the accused in this case. Various reports also point to the fact that the Chinese government is also covertly backing the Shugden fundamentalist groups. The leaders of an association called “North America Gelug Association”, which was established in March 2011 in United States, met Chinese officials in New York several times and have also visited China on a regular basis.