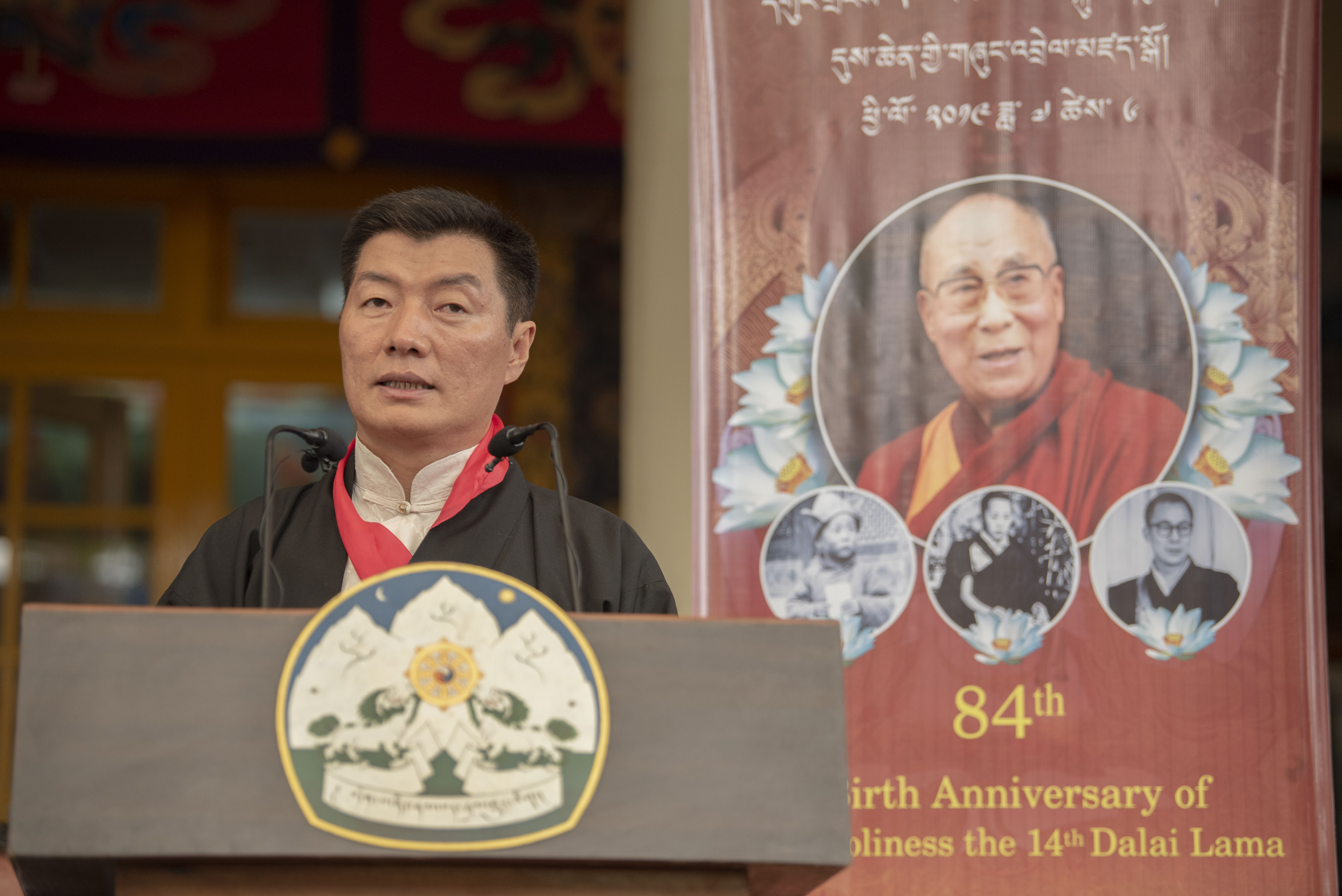 We are gathered here today to celebrate the eighty-fourth birthday of His Holiness the Great Fourteenth Dalai Lama, the manifestation of Avalokiteshvara, the Bodhisattva of Compassion, the spiritual leader of Tibet and the beloved global icon of peace and compassion.

On this auspicious and joyous occasion, with deepest gratitude and reverence in our hearts, I on behalf of the Kashag and the Tibetan people inside and outside Tibet join millions of admirers around the globe in wishing His Holiness a healthy and long life.

His Holiness was born on July 6, 1935, to a peasant family in Taktser in the Amdo region of Tibet as Lhamo Dhondup. At the very tender age of two, Lhamo Dhondup was recognized as the reincarnation of the Great Thirteenth Dalai Lama and was officially enthroned at the age of five. At the age of twenty-four, His Holiness received the Geshe Lharampa degree, the highest doctorate in Buddhist philosophy.

In 1950, His Holiness at the age of sixteen upon the solemn appeal by the cabinet shouldered the responsibility of the temporal leadership of Tibet. This came at a time when the tragic news of PLA’s illegal invasion of the eastern Tibet poured into Lhasa.

While seeking assistance from the United Nations, western countries and other neighboring nations, His Holiness sought to strive for a harmonious concord between the Tibetans and Chinese. During his visit to Beijing in 1954-55, His Holiness met with Chairman Mao Zedong and other Chinese leaders. However, China failed to keep up with tenets of the 17 Point Agreement, which the Tibetan delegates signed under duress. The brutal repression of the Tibetan people continued to upsurge with China violating all the major provisions of the agreement. In 1959 at the age of twenty-four, His Holiness was compelled to go into exile in India.

Today, 60 years into exile, Tibetan cultural identity has been revived and preserved, a full-fledged democratic Central Tibetan Administration has been established, and the spirit of Tibetans inside and outside Tibet remain strong and united. Tibet cause found its voice and support throughout the globe and the Middle Way Approach in resolving the Tibet issue through dialogue continues to be widely supported by many countries. All these milestones were achieved only through His Holiness’ tireless endeavors surmounting all the hardships through his wise and able leadership.

His Holiness always describes himself as a simple Buddhist monk and one of the 7 billion human beings. As a human being, one of the major principle commitments of His Holiness has been to advocate the cultivation of warm-heartedness, compassion and secular ethics. His Holiness has also consistently advocated for an education system that not only focused on building a successful professional, but also a good human being.

Based on His Holiness’ vision and advice, today in India and in 37 countries, changes are being initiated and brought in the curriculums emphasizing on educating the heart. In order to secure a more peaceful world in the 21st Century, His Holiness trusted that the younger generation, who will be the leaders of tomorrow, be trained in such an education system.

His Holiness has often shared about his own realization of how knowledge from the Nalanda tradition had helped in the preservation of his peace of mind during difficult periods. As a benefactor, His Holiness was convinced of the practicality and effectiveness of Nalanda knowledge in today’s world.  His Holiness has often referred to the Nalanda Tradition as a ‘Science of Mind’ and remains steadfast in his commitment to revive and promote the ancient Nalanda Tradition of India.

His Holiness has often iterated that the 21st century should be the century of peace. One of the messages that His Holiness has ardently called for and committed to is religious harmony. Counseling on how every religion has the potential to guide people on the path of true happiness, His Holiness has met with many world religious leaders and interacted through interfaith dialogues. Last month, His Holiness presided over the first ever national-level conference on ‘Celebrating Diversity in the Muslim World bringing Shia and Sunni leaders under one umbrella.

His Holiness’ life-long commitments and initiatives have been widely acknowledged and recognized through conferment of more than 150 awards including the prestigious Nobel Peace Prize in 1989.

This year during the Tenshug (Long Life Prayer) offering to His Holiness led by the Central Tibetan Administration, His Holiness reaffirmed that he would live beyond 110 years. It is important to remember that this year is also the obstacle-year of His Holiness and, therefore, it is of prime importance that we all indulge in meritorious deed and enrich our collective karma for the pacification of obstacles if there is any. In addition, we should always remember and follow the counsels of His Holiness.

Taking this opportunity I would like to offer our sincerest gratitude to His Holiness and thank each and every individuals, organizations and governments who have contributed in the fruition of His Holiness’ initiatives and supported the just cause of Tibet.

May His Holiness the Great Fourteenth Dalai Lama, the embodiment of three jewels, live for eons and eons for the benefit of all the sentient beings. May all his aspirations be fulfilled. May he soon return to Lhasa and to his people.