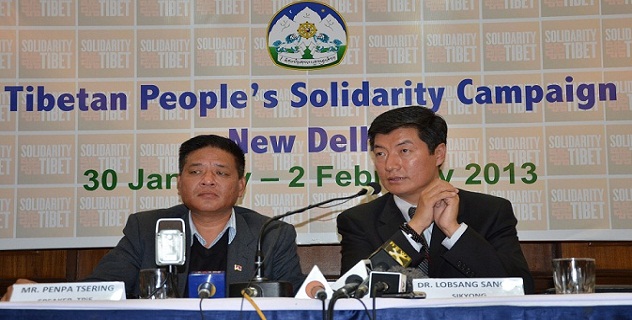 The Kashag and the Tibetan Parliament-in-exile of the Central Tibetan Administration based in Dharamshala, India is organising the Tibetan People’s Solidarity Campaign from 30 January – 2 February 2013 in Delhi. The objective of the campaign is to express solidarity with the Tibetans inside Tibet, raise awareness and seek international support for the tragic situation in Tibet.

For the press statement in Tibetan,Hindi, Chinese.

Despite the Central Tibetan Administration’s repeated appeals not to do so, in the absence of space for conventional forms of protests, there has been an unprecedented wave of self-immolations inside Tibet. Since 2009, 99 Tibetans have set themselves on fire protesting against the Chinese government’s repressive policies in Tibet. The most recent one being Kunchok Kyab who self-immolated on 22 January 2013. The messages they have left behind are testaments to their motiviation and aspirations for freedom and return of His Holiness the Dalai Lama to Tibet. Instead of looking into real causes of the self-immolations, the Chinese government always blame His Holiness the Dalai Lama and outside forces.

The Chinese government has responded to the self-immolations with more repressive measures. They have locked down the restive areas and banned journalists, tourists and other visitors to Tibet. Moreover they have flooded the restive hotspots with armed personnel from People’s Liberation Army (PLA) and People’s Armed Police (PAP). Thus it is evident that Beijing is attempting to contain the new force of resistance through more draconian measures. Criminal prosecutions are being carried out to target the families and friends suspected to be involved.

While the Central Tibetan Administration welcomes the statements of concern expressed by various governments around the world, including that of the United Nations, more needs to be done to call upon China to engage in peaceful dialogue with envoys of His Holiness the Dalai Lama to find a mutually beneficial solution to the issue of Tibet through the Middle Way Approach.

The Central Tibetan Administration stands in solidarity with the Tibetans inside Tibet and appeals to India and the International community to urge China to: