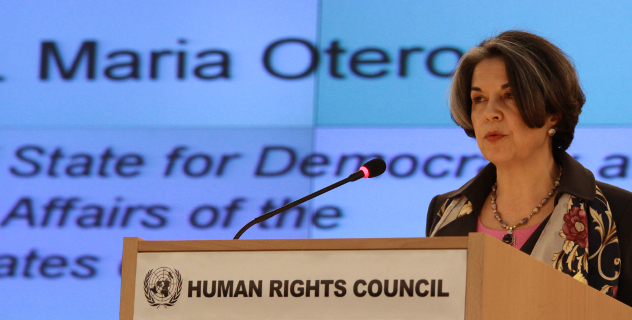 DHARAMSHALA: Expressing deep concern and sadness over the accelerating self-immolations by Tibetans inside Tibet, a top US government official on Thursday urged the China to address its policies in Tibet that are pushing Tibetans to burn themselves to death in protest and to engage in dialogue with the Dalai Lama or his representatives without preconditions.

Special Coordinator for Tibetan Issues Maria Otero said: “The United States is deeply concerned and saddened by the continuing violence in Tibetan areas of China and the increasing frequency of self-immolations by Tibetans. Chinese authorities have responded to these tragic incidents with measures that tighten already strict controls on freedoms of religion, expression, assembly and association of Tibetans. Official rhetoric that denigrates the Tibetan language, the Dalai Lama, and those who have self-immolated has further exacerbated tensions.”

“Senior U.S. officials have directly raised the issue of Tibetan self-immolations with their Chinese government counterparts. The U.S. Government has consistently urged the Chinese government to address policies in Tibetan areas that have created tensions. These policies include increasingly severe government controls on Tibetan Buddhist religious practice and monastic institutions; education practices that undermine the preservation of Tibetan language; intensive surveillance, arbitrary detentions and disappearances of Tibetans, including youth and Tibetan intellectual and cultural leaders; escalating restrictions on news, media and communications; and the use of force against Tibetans seeking peacefully to exercise their universal human rights.