A top UN official has urged China to address issues in Tibet that have led to what she says is a rise in extreme protests, like self-immolations. 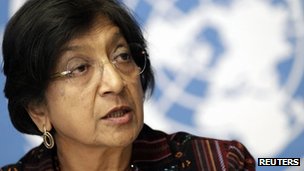 UN rights chief Navi Pillay said stability in the region could not be achieved by heavy security and the suppression of human rights.

About 60 Tibetans have reportedly set themselves alight in what activists say are protests against Beijing.

Foreign media are banned from the region, making verification of some 60 self-immolation cases reported since 2011 hard to confirm.

Chinese state media have confirmed some of the self-immolations, but not all. More than half of those who set themselves on fire are believed to have died.

Ms Pillay said she was concerned by reports of detentions and disappearances and curbs on the cultural rights of Tibetans.

“I have had several exchanges with the Chinese government on these issues. But more needs to be done to protect human rights and prevent violations,” she said in a statement.

“I call on the government to respect the rights to peaceful assembly and expression, and to release all individuals detained for merely exercising these universal rights.”

She also asked Tibetans to refrain from desperate forms of protest.

“I recognise Tibetans’ intense sense of frustration and despair which has led them to resort to such extreme means, but there are other ways to make those feelings clear,” she said.

“The government also needs to recognise this, and permit Tibetans to express their feelings without fear of retribution.”

There were 12 outstanding requests for UN human rights officials to visit the country, she added.

China’s leaders blame the Dalai Lama, the Tibetans’ exiled spiritual leader, for inciting the self-immolations and encouraging separatism in Tibet.

He rejects this, and both activist groups and the Tibetan government-in-exile say the self-immolations are protests against tight Chinese control of the region and religious repression.