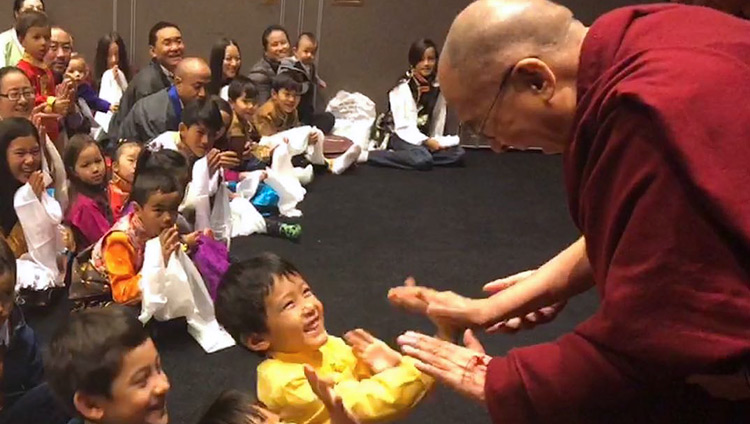 His Holiness playfully greeting young Tibetan children as he arrives for his meeting with the members of Tibetan community and Tibet support groups in Malmo, Sweden on 13 September, 2018. Photo by Tsetan Samdup

Malmo, Sweden: On his second morning in Malmo, south Sweden, His Holiness the Dalai Lama greeted members of the Tibetan community in Sweden, Denmark and Norway.

The group along with Tibet Support Group from Sweden and nearby Scandinavian countries received a special audience with His Holiness on Wednesday.

As per the report of dalailama.org, His Holiness first engagement was to meet approximately 100 Tibetans resident in Scandinavia and about 60 members of Tibet Support Groups.

Expressing His joy over meeting, His Holiness affirmed that the cause of Tibet is a just cause as Tibet only seeks for the rights and freedom mentioned in the Chinese constitution and those rights must be implemented not just in Tibet Autonomous Region (TAR) but all over Tibet.

Highlighting the ancient civilisation of Tibet, His Holiness said, ““Tibet, also known as the Land of Snow, is the source of water for much of Asia. Besides this, it is a place where archaeologists have found stone tools that indicate human communities lived there 35,000 years ago”. 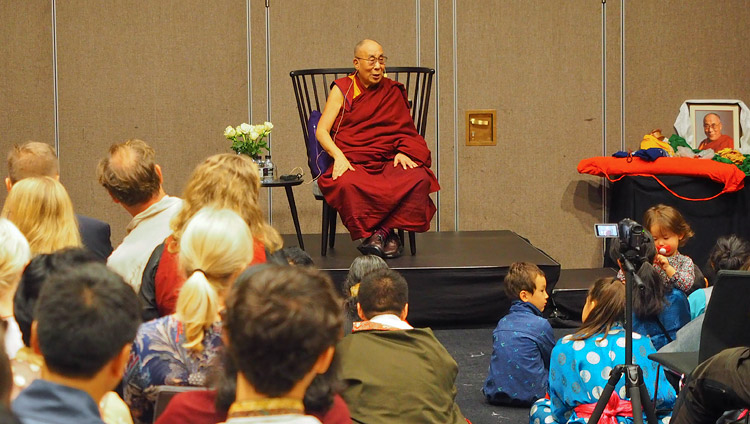 His Holiness the Dalai Lama speaking to members of the Tibetan community and Tibet support groups in Malmö, Sweden on September 13, 2018. Photo by Jeremy Russell

Thereafter, His Holiness talked about the genesis of Buddhism in Tibet and the contributions of Tibet’s great kings in promoting and advancing Buddhism in the country.

“The Tibetan script that was refined at this time was based on an Indian model and as interest in Buddhism grew, Trisong Detsen looked to India for support. He invited Shantarakshita from Nalanda University to establish Buddhism in Tibet. This is how we came to adopt the Nalanda Tradition, which involves intense study of philosophy using reason and logic” said His Holiness.

His Holiness acknowledged that Tibetans for more than 1000 years have successfully preserved the Nalanda tradition.

His Holiness further reiterated that unlike other Buddhist scholars, Tibetan scholars rely on reason and logic as they go about teaching Buddhism and that His Holiness confirmed has enabled Tibetan scholars to have successful engagements and discussions with modern scientists in recent years.

Concluding his brief meeting with Tibetans and Tibet supporters, His Holiness consoled the gathering that despite China’s repetitive attempt to destroy Tibetan Identity and Tibetan spirit, Tibet has remained strong in unity which is why China was unsuccessful in their pursuit.

Meanwhile, His Holiness urged the gathering especially the Tibetans to enjoy the blessings of the Protectors of the Three Families, Avalokiteshvara, Manjushri and Vajrapani.  As His Holiness leaves for his next event, he reminded the Tibetan parents to encourage their children to speak Tibetan language regularly which will build pride in them about their culture.

His Holiness leaves for Malmo University to present lecture on ‘secular ethics’ to the students of the university. 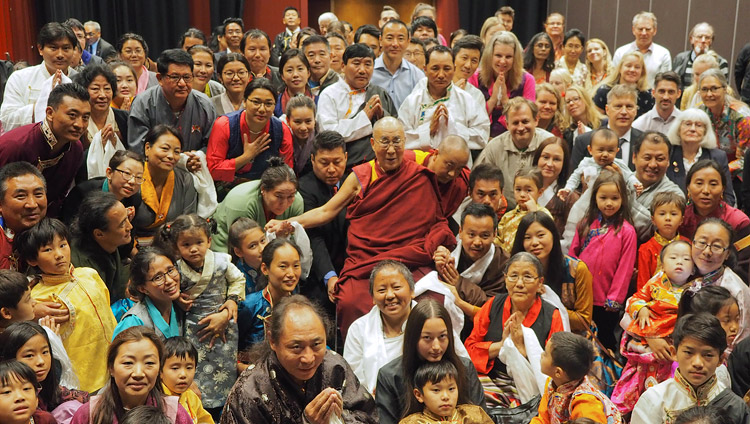 His Holiness the Dalai Lama posing for a group photos with members of the Tibetan community and Tibet support groups after their meeting in Malmö, Sweden on September 13, 2018. Photo by Jeremy Russell