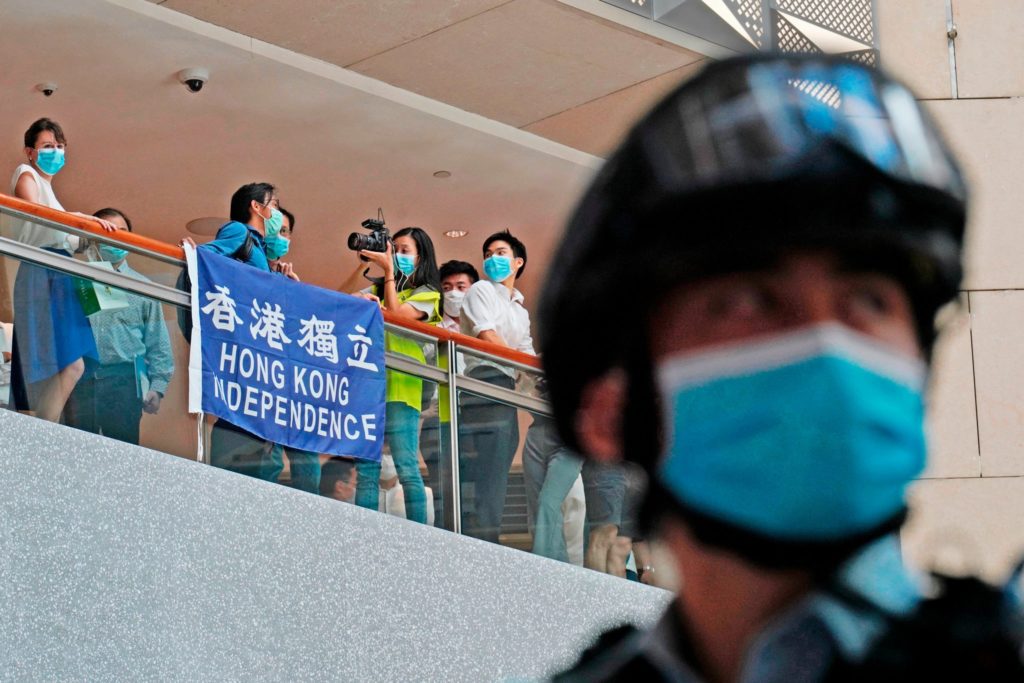 A police officer in Hong Kong on Tuesday standing guard near protesters opposing Beijing’s new national security legislation for the city. The law criminalizes, among other things, threats to China’s national unity, including calls for Hong Kong to become independent from the mainland. Credit…Vincent Yu/Associated Press

After many years of rejecting the people of Hong Kong’s persistent demands for genuine universal suffrage and other rights, China made its position clear again on Tuesday with the legislative equivalent of a cracking head bash.

It chose the eve of July 1, a triple anniversary — of the birth of the Chinese Communist Party (1921), the handover of Hong Kong from Britain to China (1997) and a break-in of the city’s legislature by pro-democracy activists (2019) — to pass a draconian national security law that will forever harm Hong Kong’s political freedoms and hobble its economic relations with the rest of the world.

Hong Kong is a special administrative region of China with its own, supposedly independent, executive, legislative, and judiciary branches. Yet the new law was proposed in Beijing, drafted in Beijing, and promulgated in Beijing.

It went into force as soon as it was gazetted on Tuesday night — which was also the first time its contents were released to the public.

The law criminalizes acts of secession, the subversion of state power, terrorism, and “collusion with foreign or external forces to endanger national security.” Some offenses in each of these categories are punishable with life imprisonment. Property damage alone might amount to terrorism.

Especially severe cases may be referred to as the Supreme People’s Court of China, to be tried by another court of its choosing under the mainland’s law of criminal procedure, which allows for capital punishment in some cases. The death penalty was abolished in Hong Kong in 1993, and no execution had taken place since 1966.

The new law trumps any local laws that are inconsistent with it. A national security commission will be set up in the city, joined by a Beijing-appointed adviser, to oversee the law’s implementation. Its work will not be made public, nor will that be subject to judicial review.

The Hong Kong chief executive is to appoint special judges to hear national security cases. The city’s Secretary of Justice may deny a defendant a trial by jury. The ultimate power to interpret the law rests with Beijing.

Though the law is being called “national security” legislation, its true, bespoke purpose is to suppress the decades-old pro-democracy movement in the city — which has grown more vocal in recent years as repression from Beijing has increased, with some younger people calling for outright independence for Hong Kong.

Leaders of political organizations that China has previously accused of promoting separatism promptly announced their groups’ dissolution on Tuesday.

Politically astute Hong Kongers are only too aware of the Chinese government’s propensity to bring bogus charges against its political opponents.

So are some foreign governments. Washington had already announced a spate of sanctions against officials deemed to violate the mainland’s obligations to Hong Kong. On Tuesday, it barred defense exports to Hong Kong — and said it would begin to cancel the city’s preferential trade status, arguing, correctly, that Hong Kong can no longer be considered to operate with significant autonomy from the mainland.

The European Union’s Parliament recently passed a (nonbinding) resolution urging member states to bring China before the International Court of Justice if the law was passed. Prime Minister Boris Johnson of Britain has pledged to help some three million eligible people from Hong Kong live and work in his country. The government of Taiwan has said that it would grant asylum to some Hong Kongers on humanitarian grounds.

But even foreign politicians sympathetic to the plight of Hong Kong today bear some responsibility for it — if only by dint of their wishful thinking about Beijing’s original intentions.

Many seem to have looked upon the first 15 years or so after Britain handed over Hong Kong to China in 1997 as the golden age of the city’s semi-autonomy. They endorsed the “one country, two systems” principle that was put forward by the Chinese leader Deng Xiaoping in the 1980s — and enshrined in the Basic Law, Hong Kong’s mini-constitution — as a benign concept that would protect the city.

In their view, President Xi Jinping of China has recently reversed, even betrayed, Deng’s blueprint for Hong Kong.

But this is faulty thinking. And it would be simplistic, as well as ultimately dangerous, to think that China has been acting in bad faith only under Mr. Xi today.

Deng hardly was a man of concessions. During the late 1980s, while China was relatively weak, he repeatedly advised acting meek and biding one’s time. Yet even during negotiations with Britain about the status of Hong Kong, it was he who insisted that Chinese soldiers should be stationed in Hong Kong after 1997, over the advice of some of his top officials. And it was Deng who ordered tanks into Tiananmen Square in 1989 to mow down peaceful demonstrators by the hundreds.

Mr. Xi today isn’t betraying Deng’s vision for Hong Kong back then: He is only dutifully carrying that vision forward to what is, some three decades later, its natural, logical culmination.

The Basic Law, which was designed in the late 1980s and adopted in 1990, is an inherently cynical document.

It was instrumental in ensuring the smooth transfer of sovereignty from Britain in 1997 because it seemed to contain generous guarantees from China, in particular provisions that safeguarded Hong Kongers’ fundamental political liberties and promised to give them more democratic rights in the future.

But many observers and major political actors in Hong Kong — including some who helped draft the Basic Law — have consistently overrated its apparent assurances, while overlooking the fact that many of those come with sleeper clauses or caveats that can override them.

The Chinese government today is violating the Basic Law, neither in letter nor in spirit, so much as connecting different dots in it. And that is the true horror lurking behind its original concessions.

Take Beijing’s plan now to set up in Hong Kong a commissioner’s office for national security affairs to ensure that the city’s authorities will apply the new law effectively. This move, as I wrote previously, flatly contradicts the following clause of Article 22 in the Basic Law:

“No department of the Central People’s Government and no province, autonomous region or municipality directly under the Central Government may interfere in the affairs which the Hong Kong Special Administrative Region administers on its own in accordance with this Law.”

But that provision also says that “if there is a need” for any such department etc. to “set up offices” in Hong Kong, that department requires nothing more than the consent of the central government (and that of the Hong Kong government, which can be coerced at will).

Likewise, the first clause of Article 39 says that “the provisions of the International Covenant on Civil and Political Rights” and other rights agreements “as applied to Hong Kong shall remain in force.” What if those protections became irksome to Beijing? No problem, there’s Article 160:

“Upon the establishment of the Hong Kong Special Administrative Region, the laws previously in force in Hong Kong shall be adopted as laws of the Region except for those which the Standing Committee of the National People’s Congress declares to be in contravention of this Law. If any laws are later discovered to be in contravention of this Law, they shall be amended or cease to have force in accordance with the procedure as prescribed by this Law.”

And then there’s Article 18. It allows the Standing Committee of China’s rubber-stamping legislative body, the National People’s Congress, to “add to or delete from the list of laws in Annex III” in the name of defense, foreign affairs, national unity or security, “as well as other matters outside the limits of the autonomy” of the city. That annex is a lengthy appendix of laws passed on the mainland that apply in Hong Kong, all exceptionally.

Article 18 was, naturally, the perfect vehicle for implementing the new national security law.

In the 1980s, when people in Hong Kong were worried about their post-1997 future, the Chinese government played up the concessionary parts of the Basic Law. That was the first, the good-looking, stage in a two-stage plan to absorb the city into the mainland’s universe.

The inevitable second stage is unfolding today. Now that Hong Kong is under the watchful eye of both Chinese soldiers garrisoned in the city and their newly loyal local cousins — the increasingly violent and politicized Hong Kong police force — Beijing is activating the sleeper clauses of the Basic Law to feather the deathbed of the city’s autonomy.

Politicians and thought leaders in Western countries, as well as older members of Hong Kong’s pro-democracy movement, are only beginning to realize — if they are at all — that for three decades or more they have been reading the Basic Law, and China itself, wrong. They believed that the West, by helping China modernize, would also help it democratize and with that, would be protecting Hong Kong.

Many of the younger activists I have come across in Hong Kong think differently. They fault their forebears for buying into the Basic Law and “one country, two systems”; to them, all that was a Communist siren song, a scam.

And so some of them have called for full autonomy for Hong Kong. Such goals may be unrealistic now — and as of Tuesday, even outright dangerous. But they at least expose China’s decades of deception and put the world on notice.

Midday on Wednesday, the city police reported their first arrest under the new security law: a man holding a banner that read “Hong Kong independence.”

*Yi-Zheng Lian, a commentator on Hong Kong and Asian affairs, is a professor of economics and a contributing opinion writer.