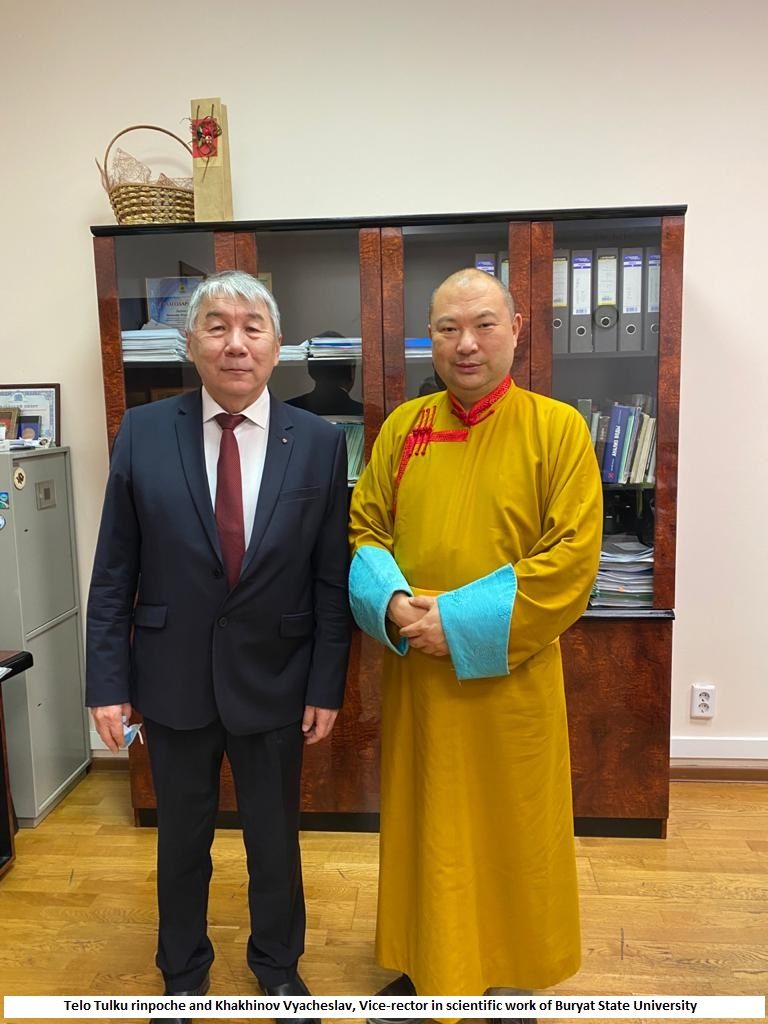 Moscow, November 17, 2020: A delegation led by Honorary Representative of His Holiness the Dalai Lama in Russia, Mongolia and the CIS countries completed an official tour of eastern region of Russia from 15-23 November.

On November 15, Representative Telo Tulku Rinpoche held a working meeting and discussions on Buddhist education and scientific research in the field of Buddhism. Telo Tulku Rinpoche visited the Buryat State University in Ulan Ude, the capital of Buryat Republic and the Buddhist University “Dashi Choinhorlin” in Ivolginski Datsang, as well as the Center for Oriental Manuscripts and Xylographs of the Institute of Mongolian Studies, Buddhology and Tibetology of the Siberian Branch of the Russian Academy of Sciences.

Telo Tulku Rinpoche also met with the rector Geshe Dembryl at the Buddhist University at Dashi Chokorling Ivolginski Datsang to discuss issues of Buddhist education. As the senior administrator of the Central Khurul “Golden Abode of Shakyamuni Buddha,” Yonten Gelyung said: “Rector Geshe Dymbryl, who received Buddhist education at the Tibetan Monastic University Drepung Gomang, where monks from Buryatia, Kalmykia and Tuva studied for centuries, spoke about the activities of the university, educational programs, Buddhist monks and conducted a study tour of the academic building and the Ivolginsky Datsnag”. 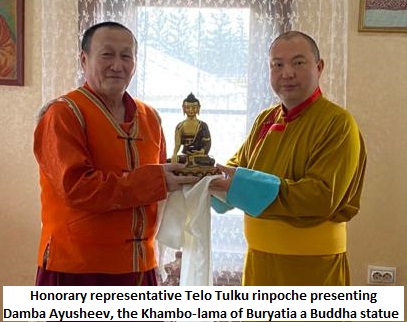 At the end of the discussions at the Dashi Choinhorlin Buddhist University, Honorary Representative Telo Tulku Rinpoche, heads of the Ivolginski Datsang, and Khambo lama of Buryat Republic, Ven Damba Ayusheev summed up the results of the two-day work and expressed their intention to continue progressive cooperation in the field of Buddhist education.

Telo Tulku Rinpoche presented Khambo lama with a statue of the Buddha on behalf of the CTA and thanked him for a warm reception.

Telo Tulku Rinpoche also visited the Center for Oriental Manuscripts and Woodcuts of the Institute of Mongolian Studies, Buddhology and Tibetology of the Siberian Branch of the Russian Academy of Sciences, renowned for the richest collection of Tibetan and Mongolian written sources.

Rinpoche and members of the delegation were greeted by the head of the centre, Oleg Rinchenov, as well as the leading researcher of the centre and curator of the Tibetan fund, Andrei Bazarov. 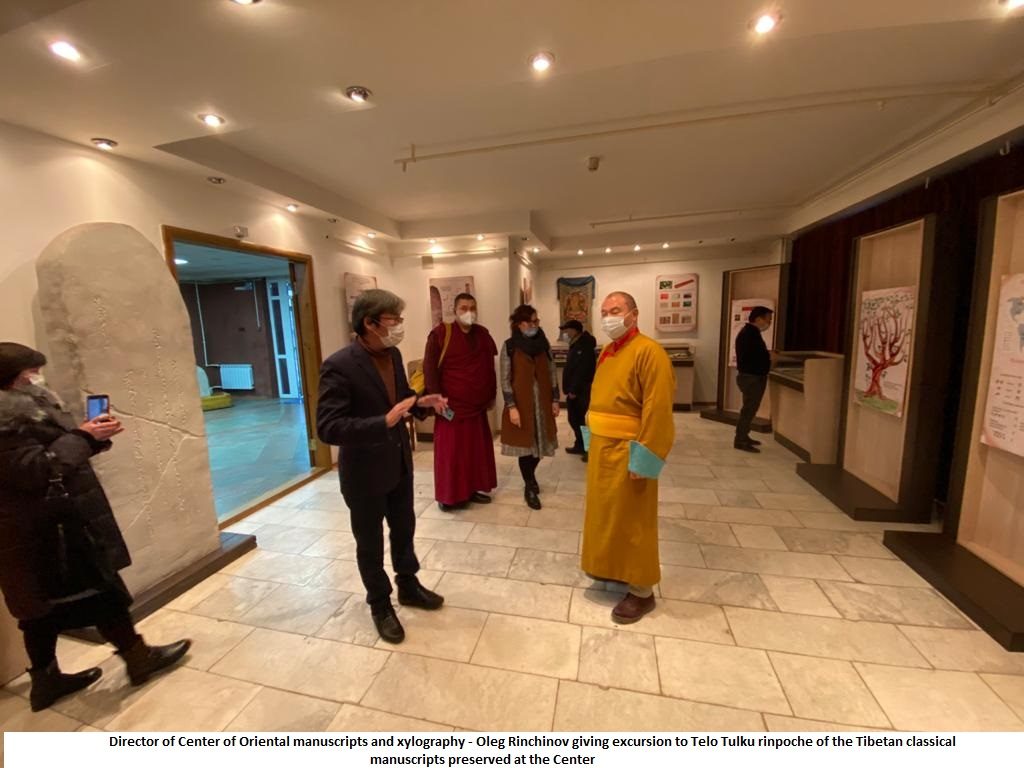 “The door is always open to various institutions in the exiled community in India for further collaboration and research,” said Telo Tulku Rinpoche. “We would like to see closer ties and more intensive research done for the benefit of both sides, Tibetan and Buryats”.

On the last night of the visit, former Duma (Russian Parliament) Deputy, Mr Irenchi Makhtanov held a reception dinner for Telo Tulku Rinpoche and gave a briefing on the current political situation in Tibet and current news regarding Tibet.

“In remembering my audience with H.H. the Dalai Lama in India, I look forward to going back to Dharamsala to learn more about the Tibetan movement,” said Mr Irenchi Makhtanov. 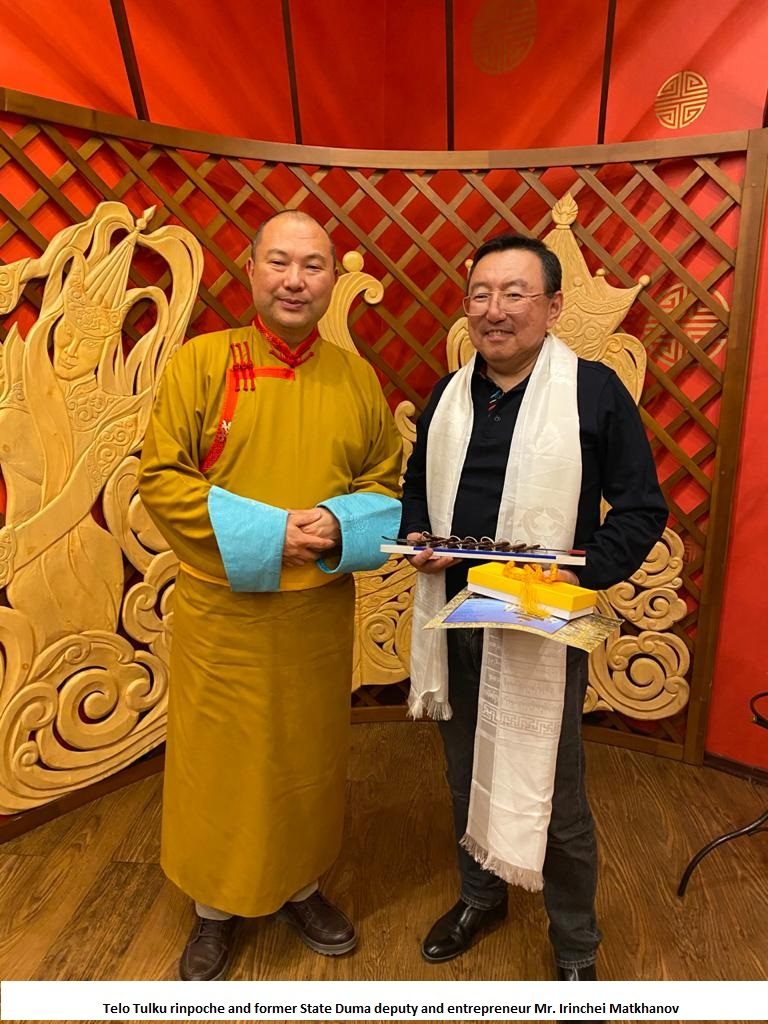 In the Aginsky datsan, Telo Tulku Rinpoche was met by the lamas of the datsan, headed by Did Khambo-Lama of the Trans-Baikal Territory, Tsyren Lama Dondukbaev. According to Telo Tulku Rinpoche, the historical building of the Aginsky Datsan “is charged with extraordinary energy – you can vividly feel the breath of history there.” 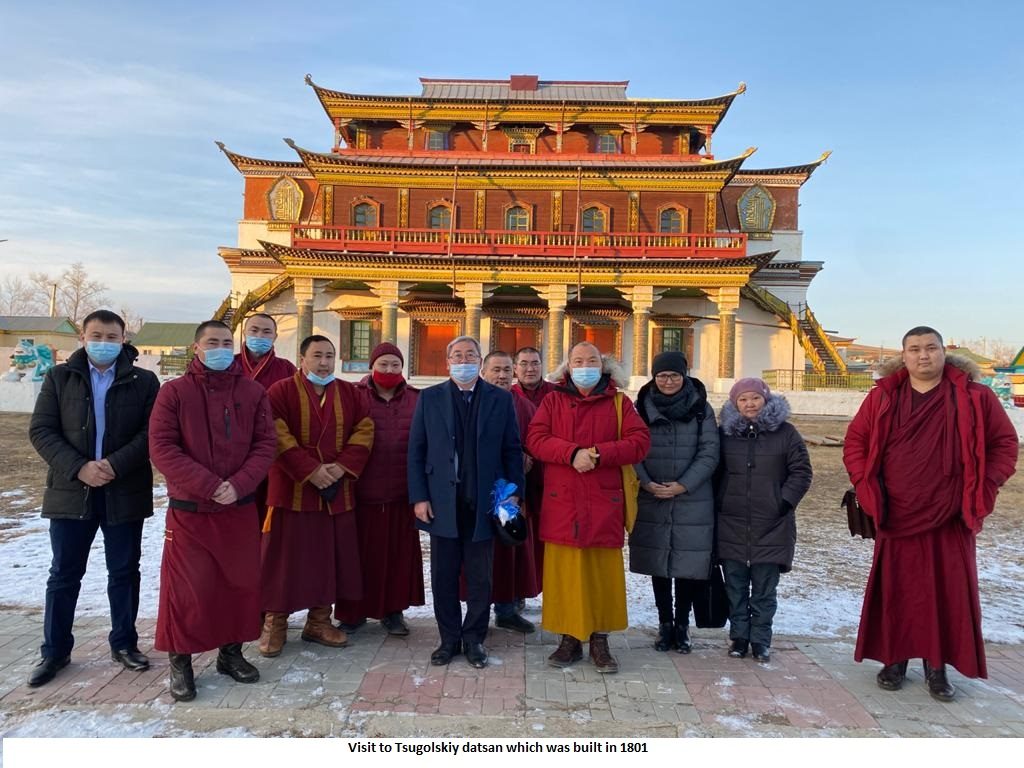 “For many centuries, hundreds of Buddhist monks and scientists-philosophers indulged in contemplative practices, offered prayers and performed rituals in the Aginsky Datsan. When you are there, their images clearly pop up in consciousness. A visit to this place was a real blessing for me – I felt deep feelings and felt the historical bond between Tibet and these regions,” said the Supreme Lama of Kalmykia. He noted that the temple complex was much larger than he had imagined.

“I was very happy to visit these places, they filled my heart with hope and inspiration, and I look forward to a new opportunity to visit these blessed datsans,” Rinpoche noted, summing up his visit to the Aginsky and Tsugolsky datsans. 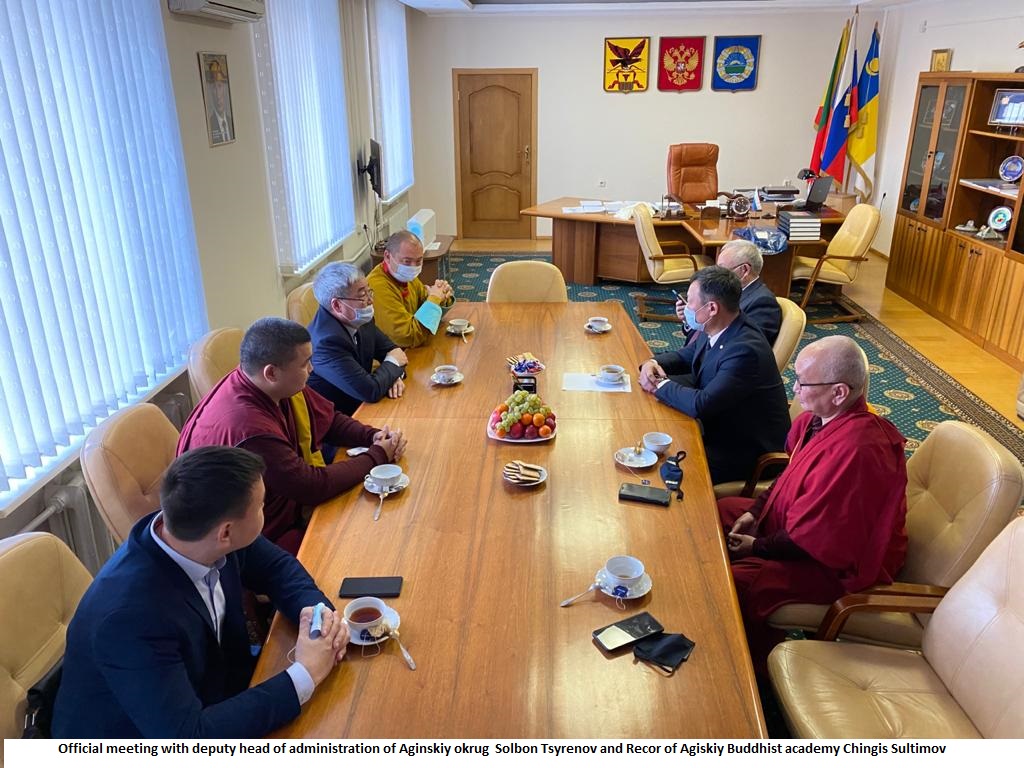 During his visit to the Khabaikal Territory, Telo Tulku Rinpoche also met with the Deputy Head of the Aginsky Buryat District Administration, S.A. Tsyrenov and deputy of the Legislative Assembly of the Trans-Baikal Territory Ts.B., Tsyrenov.

The delegation also visited the Aginsky National Museum and the Aginsky Medical College. From the Trans-Baikal territory, Telo Tulku Rinpoche went to Tuva, where he took part in the inauguration ceremony of the newly elected Kamba Lama (Supreme Lama) of the republic.

November 21, 2020: The Honorary Representative Telo Tulku Rinpoche arrived in the Tuva Republic on November 21. The delegation of Kalmykia arrived in Kyzyl to participate in the inauguration ceremony of the newly elected Kamba Lama of the Tyva Republic scheduled for November 22.

The guests of the ceremony made a pilgrimage to the holy places – the main khuree “Tsechenling”, the khuree “Damba Braibuling”, as well as the place “Burgan izi – Buddha’s footprint”, located 40 km from Kyzyl. At the top of a small mountain, where a wooden staircase leads, a stupa is built dedicated to the indulgence of the Buddha from the paradise of the Thirty-three deities. 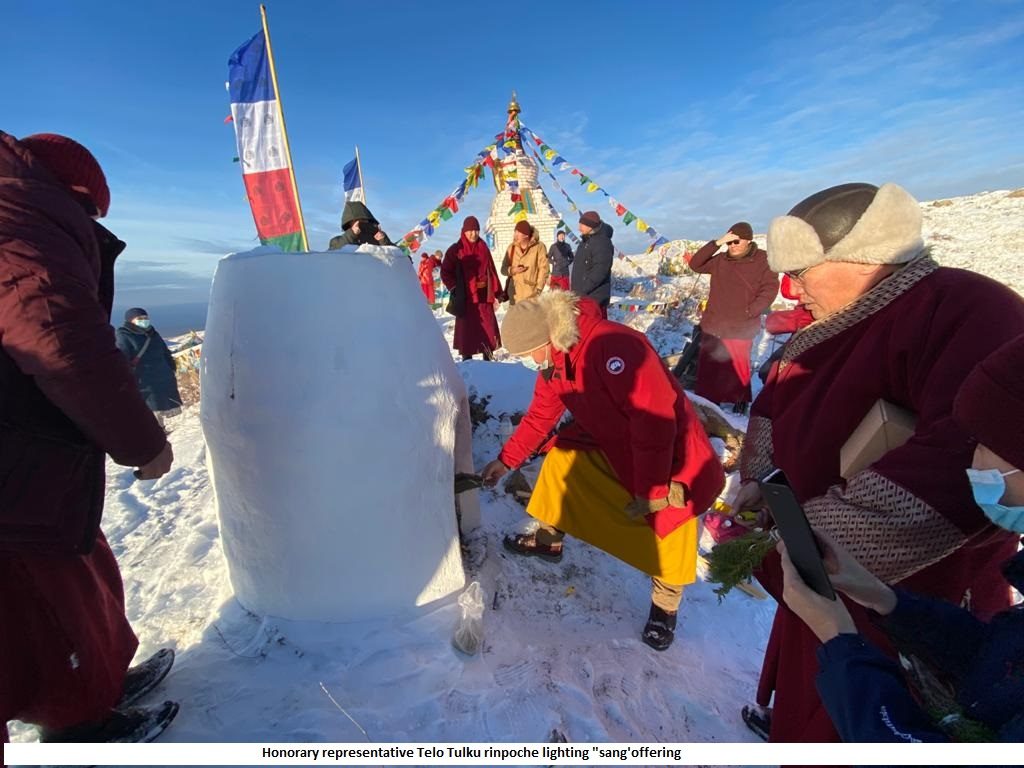 Telo Tulku Rinpoche noted that he was very glad to have the opportunity to make a pilgrimage to the sacred mountain and take part “in the offering of incense (sanga) together with the guests of the inauguration who came from afar – from neighbouring regions such as Khakassia, as well as from Irkutsk, Krasnoyarsk, Aginsky Buryat District “.

“It was a wonderful feeling to be united in prayer for the long life of H.H. the Dalai Lama, the people of Tuva and Tibet. Although we all came from different regions, we felt the joy of praying together for this special occasion,” Rinpoche noted. 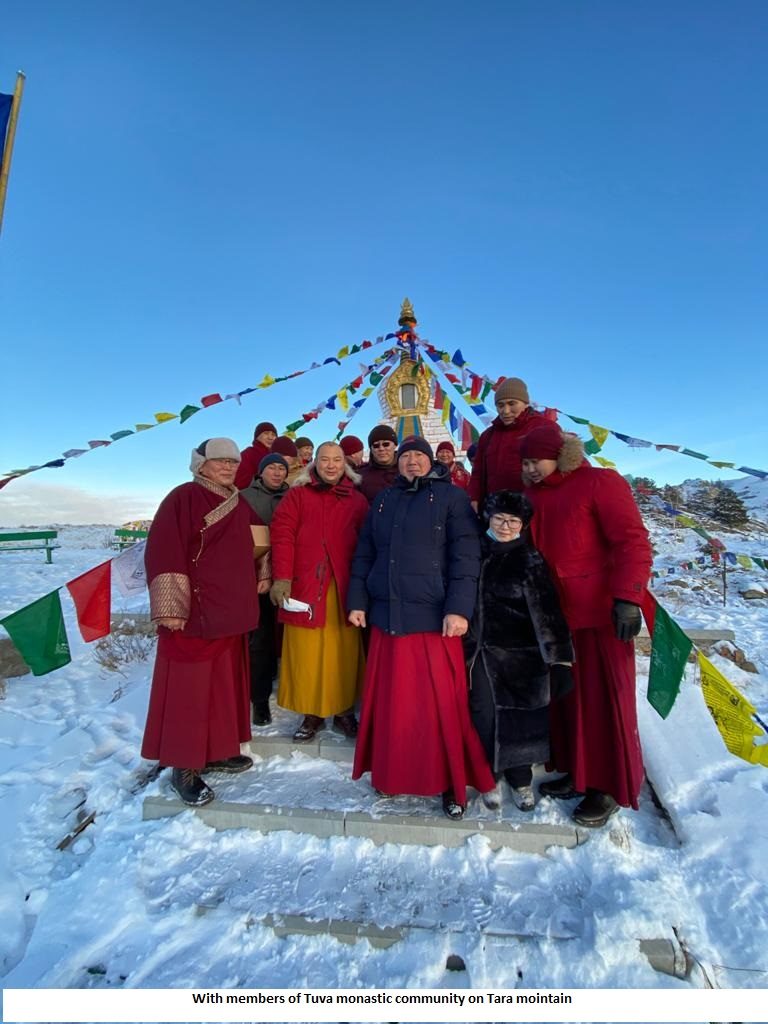 November 23, 2020: The Honorary Representative of His Holiness the Dalai Lama in Russia, Mongolia and the CIS countries, the Supreme Lama of Kalmykia, Telo Tulku Rinpoche took part in the enthronement of the Ninth Kamba Lama of the Tuva Republic Gelek Natsyk-Dorzhu on 22 November.

Speaking at the ceremony, the honorary guests including the head of the Republic of Tuva Sholban Kara-ool, delegations from Buryatia, Irkutsk region, Altai and Khakassia, Telo Tulku Rinpoche warmly congratulated the newly elected Kamba Lama on his appointment.

“Buddhism always points the way to love, kindness, compassion, understanding, respect,” said Telo Tulku Rinpoche, noting that the duty of spiritual leaders, as well as the spiritual community as a whole, is to promote the development of these qualities in people.

The head of the Buddhists of Kalmykia stressed that “it is necessary to develop and restore the Teachings of the Buddha in Russia through joint efforts” and expressed his readiness to support the clergy of Tuva.

The main content of the letter was the name bestowed by His Holiness the Dalai Lama for the new monastery which is under construction and due to complete some time next year during the 100th Anniversary of Tuva Republic. His Holiness had bestowed the name ‘Thupten Shedrupling’.

“We share the same religion, Buddhist Culture and same spiritual leader H.H. the Dalai Lama. The Tuva people and people of Tibet lost so much under communism in the 20th Century, now we have the opportunity to restore our ties as we had historically” said Telo Tulku Rinpoche. “

On behalf of CTA and Gaden Phodrang, allow me to congratulate the people of Tuva on the occasion of the enthronement of new Khambo Lama of Tuva and the Head of Republic for his achievements in development in the Republic. Honorary Representative’s visit to the Far eastern regions ended with success and has met with local Tibet support groups, Tibetan communities and government officials and NGOs.

–Filed by Office of Tibet, Moscow 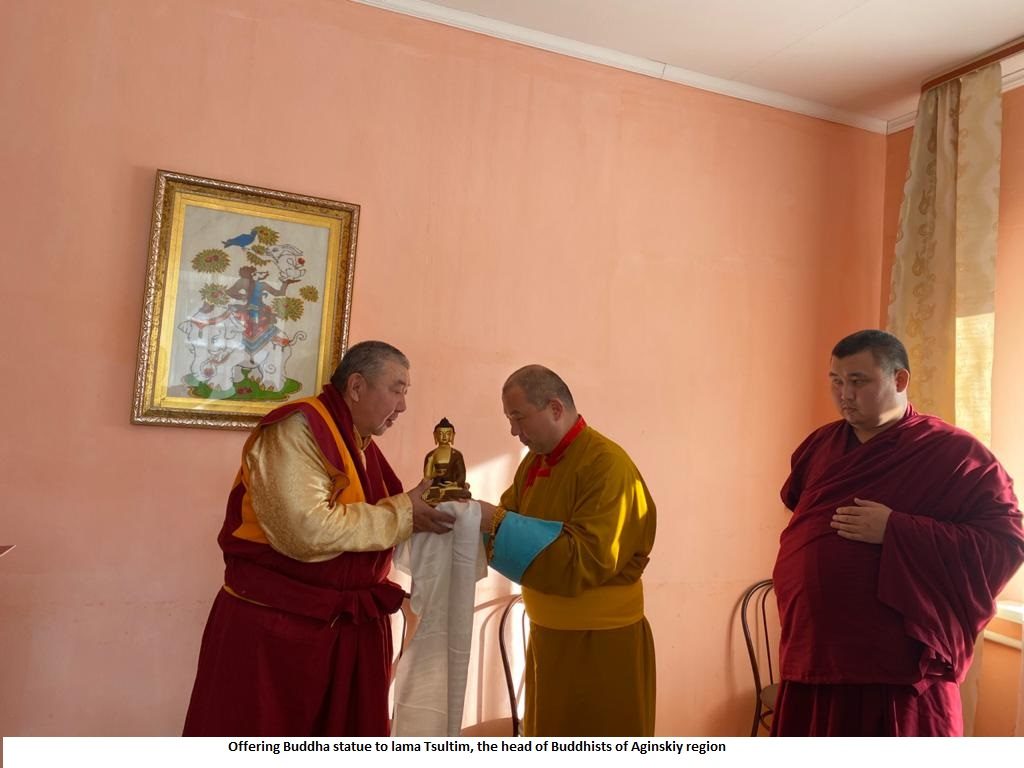 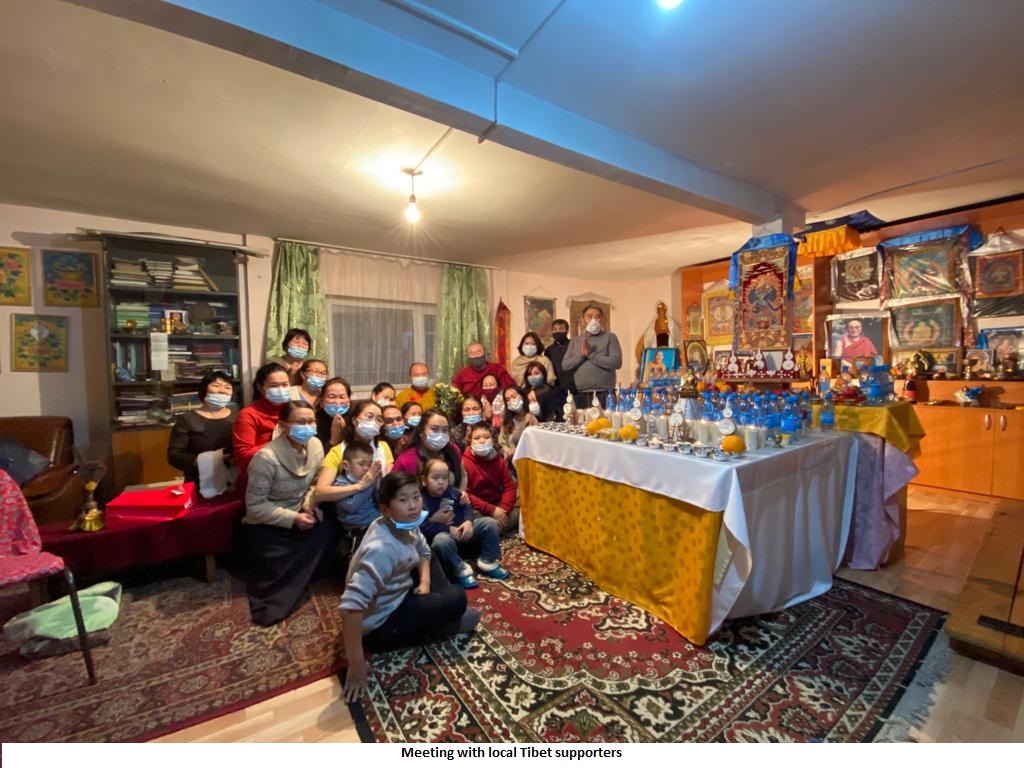 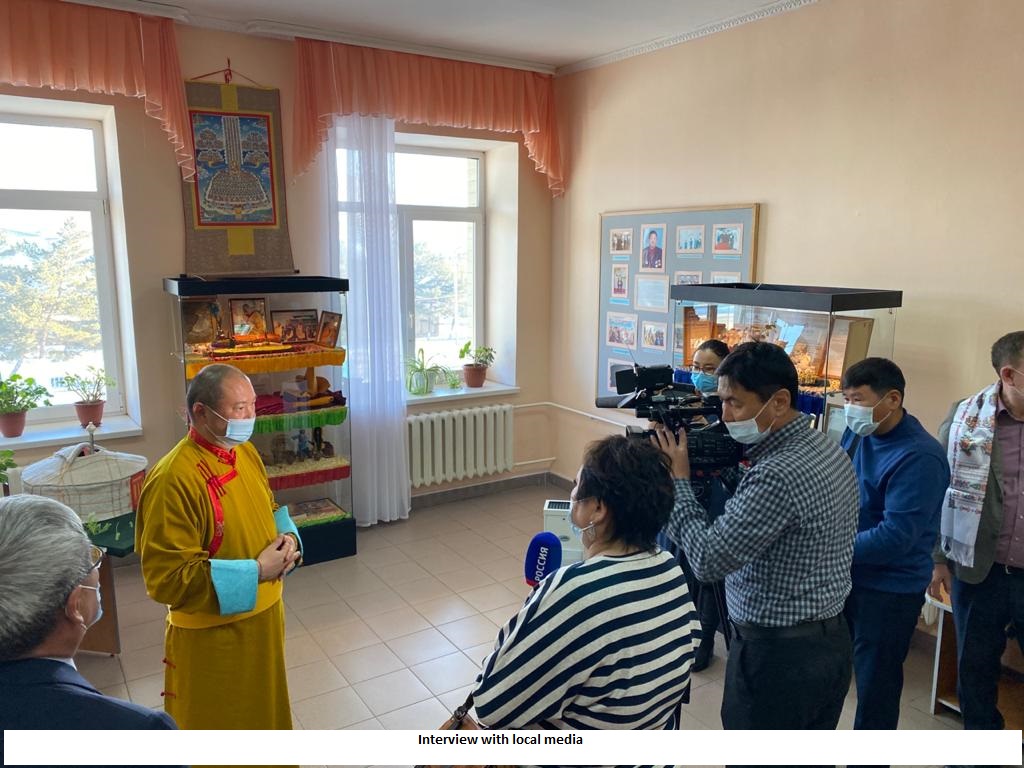 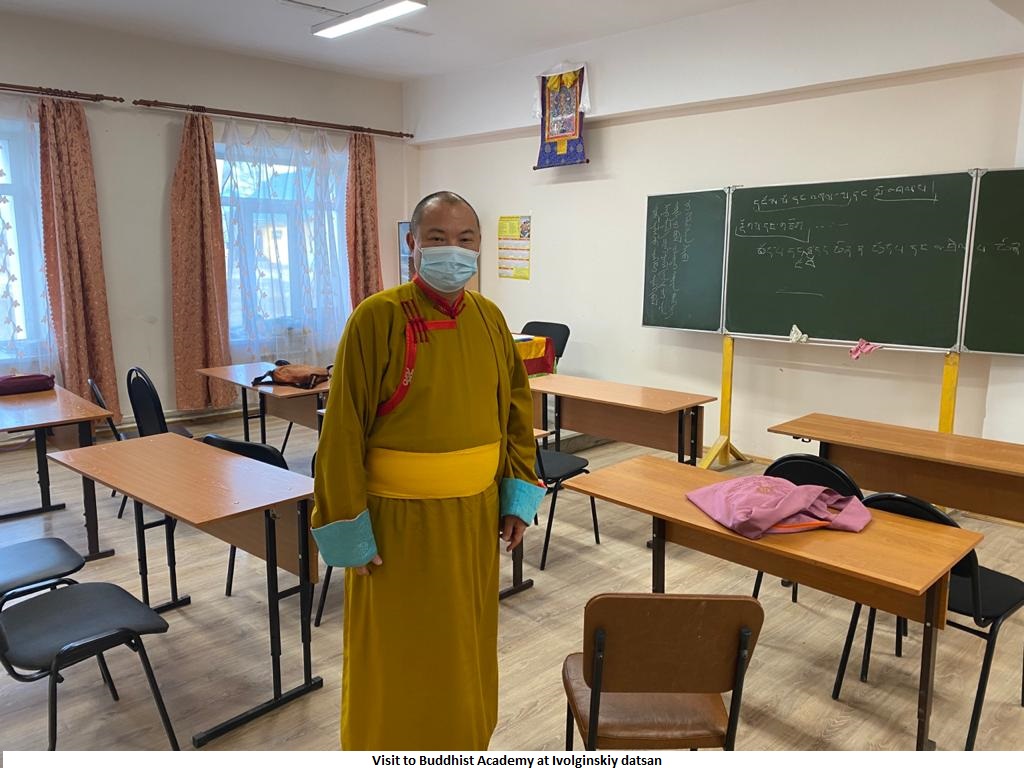 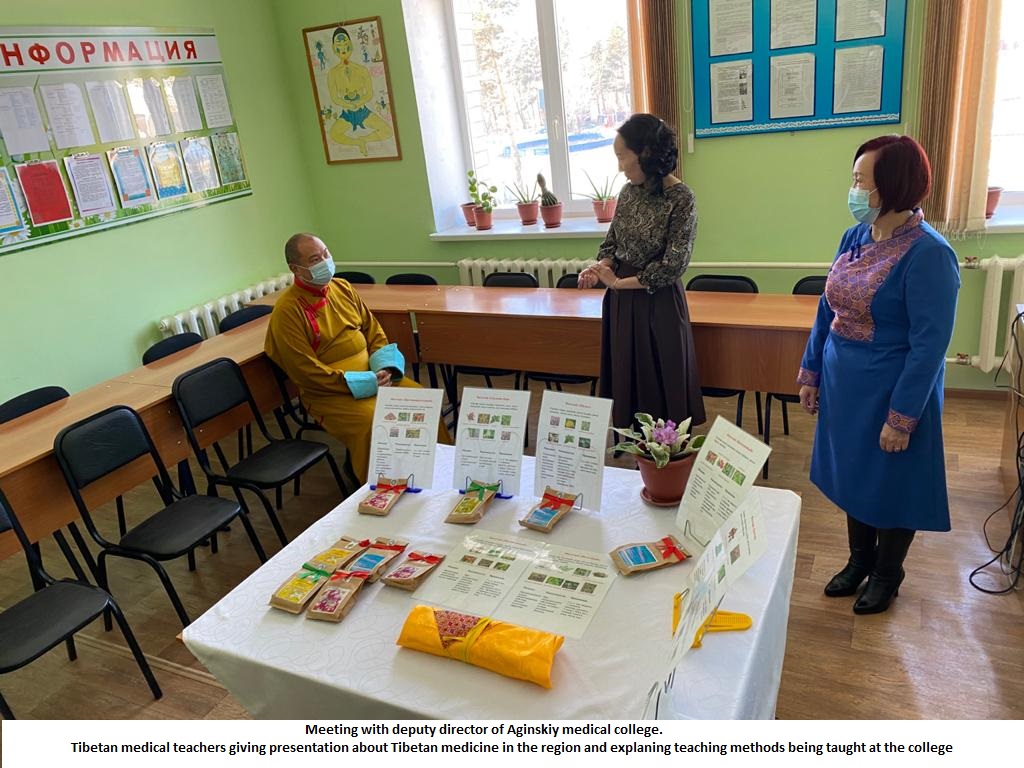 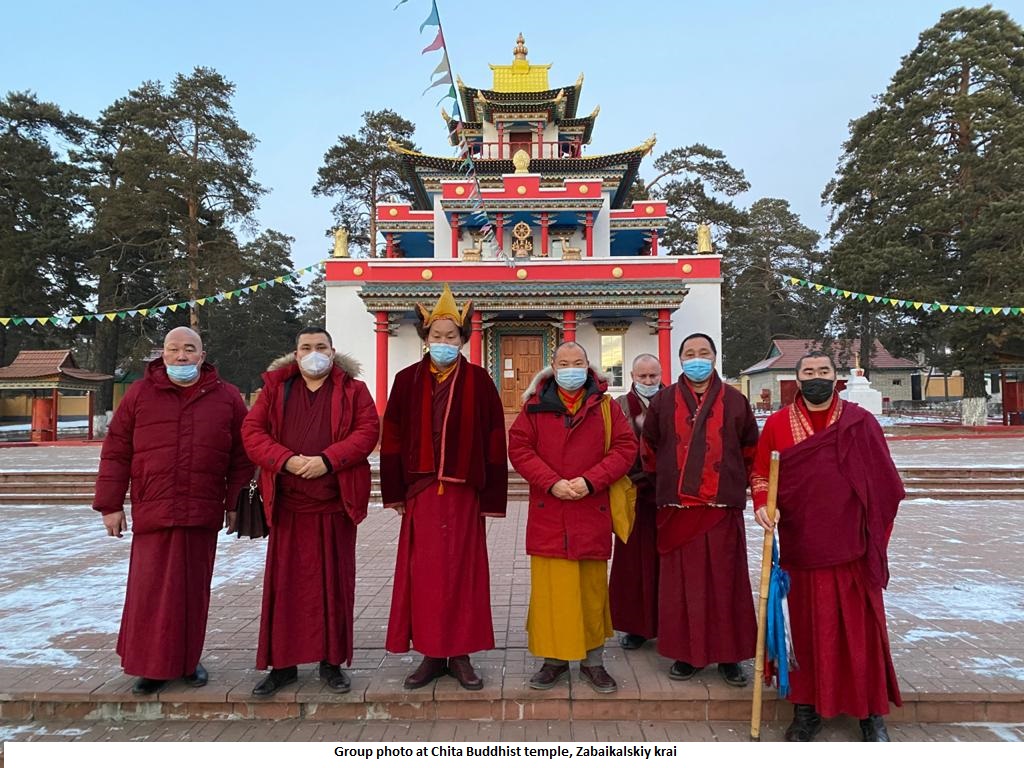 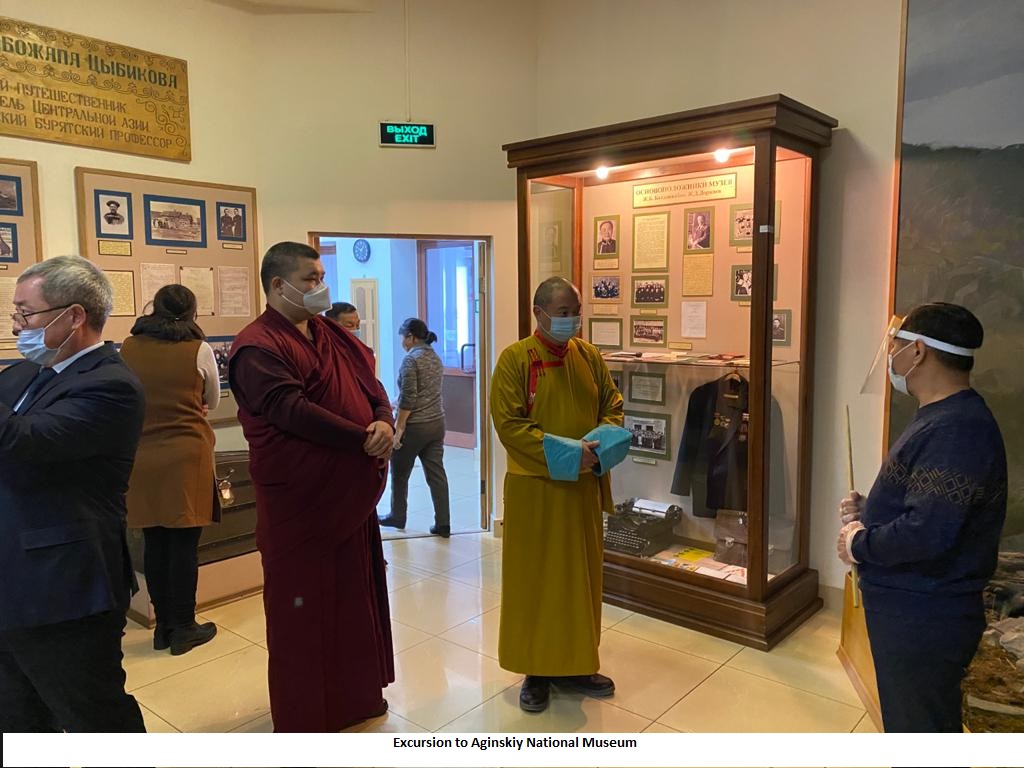 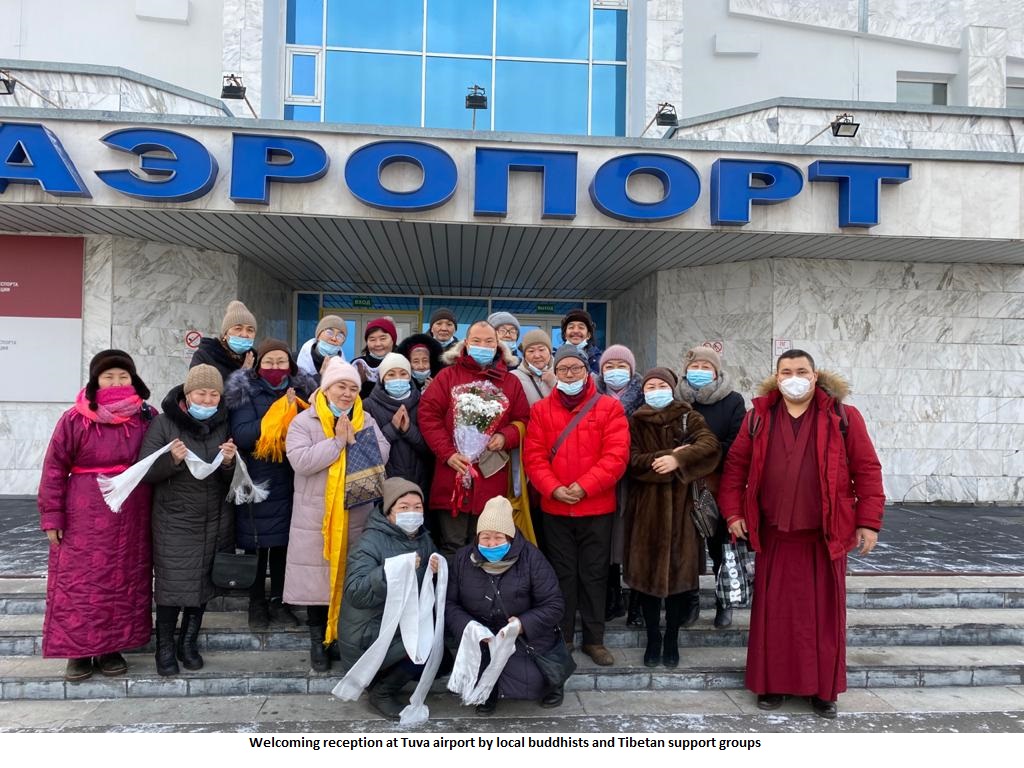