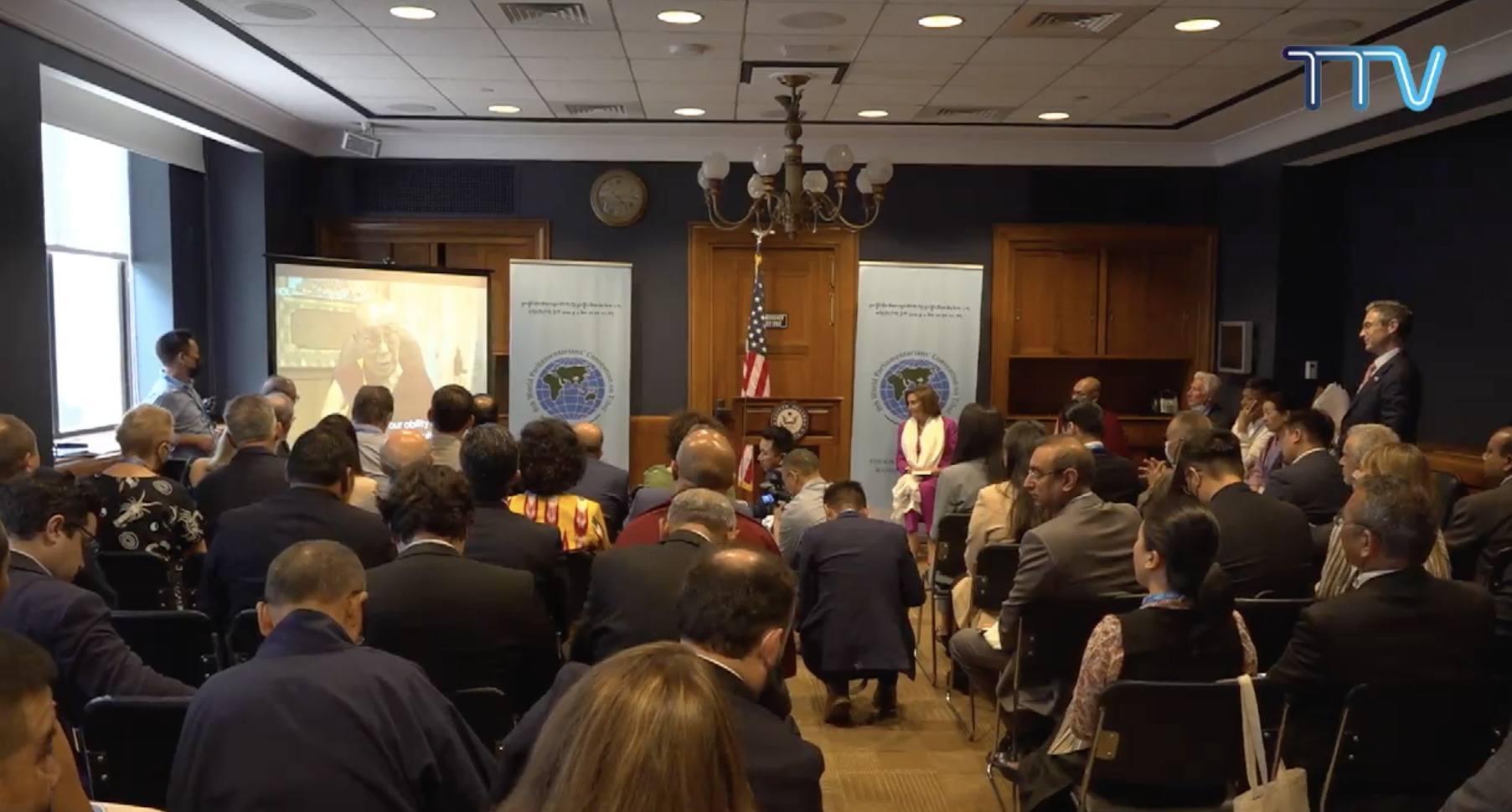 Dharamshala: His Holiness the Dalai Lama addressed the inauguration of 8th World Parliamentarians’ Convention on Tibet in a short video.

His Holiness stated “Today, many people belonging to different groups of supporters of the Tibetan cause are gathering in Washington, DC to discuss Tibet. I would like to thank you all. On the one hand, the cause of Tibet is about truth, on the other, it involves an understanding of the workings of the mind with a view to cultivating compassion and inner peace. Therefore, it is not just a matter of politics, but also pertains of the cultivation of peace of mind based not on faith, but on reason.”

Recounting the Great Abbot Shantarakshita’s establishment of aspects of Indian culture in Tibet during the 8th century, His Holiness said “we have assimilated that culture to such an extent that even as young children, Tibetans express compassion when they exclaim, “Don’t even kill insects!”  We are a people used to cultivating compassion from childhood. But this good practice need not be confined only to Tibetans, we can make others aware of the importance of love and compassion. Tibetans well-versed in these methods have been doing this, and they should continue to contribute to that goal since we have an opportunity to do so.”

“These issues don’t just concern Tibet. The whole world naturally seeks peace, and peace is rooted in having a good heart. This is true of all mammals, whose mothers take care of them with love and affection right from the moment they’re born. We all survive because our mothers nurture us with love and breastmilk. Like everyone else Tibetans are human beings  raised on the basis of our mother’s love and affection” His Holiness continued.

Underscoring love and compassion in achieving peace, His Holiness the Dalai Lama mentioned the modern education emanated from the west “is primarily focussed on materialistic goals. It doesn’t concern itself with the workings of the mind and emotions, nor with how to cultivate peace of mind. However, today, there is a growing interest among Western experts, psychologists and neuroscientists among them, to learn more about methods in our tradition for cultivating love and compassion. I believe we can combine our traditional understanding of the mind with modern science to show how to cultivate love and compassion and achieve peace of mind.” “We all want to be happy and fundamental to that is having a good heart. As human beings we all experience pleasure and pain, but merely having enough to eat or enjoying some short-lived entertainment are not enough to bring us lasting happiness. Being truly happy, generates a peaceful atmosphere around us, wherever we are, doesn’t it?” His Holiness added.

His Holiness further elaborated on love and compassion deeply ingrained in Tibetan culture, saying, “Tibetan culture is concerned with an understanding of the workings of mind and emotions. It’s not just about rituals for invoking gods or Nagas – and even someone who doesn’t believe in them would be happier if they had a warm heart, wouldn’t they? The key factor is love and compassion. So far, despite being in exile, with the help of many others we have preserved our heritage to the best of our ability and it has borne some fruit. As for me, I grew up in this culture, so wherever I go, I talk to other people about love and compassion. Politically, we are not seeking independence for Tibet. I have made this clear over the years. What most concerns us is the importance of preserving and safeguarding our culture and language. And the reality today is that there are growing numbers of Chinese people taking interest in Buddhism. Under such circumstances, if we can revive and extend our Tibetan culture of warm-heartedness and ethics, it will help not only Tibetans, but others with a Buddhist background too such as the Mongolians and, on a larger scale, the people of China, the most populous country in the world. We are not trying to propagate Buddhism. Cultivating a warm heart and becoming a good human being is of benefit whether you are religious or not. Right from the moment we are born, our mothers have cared for us with love and affection. But this had nothing to do with religion, did it? It came about naturally and instinctively.”

His Holiness, therefore, said “We Tibetans can set an example to others. If we can extend our culture and values more widely, I am quite sure it will benefit many people. I want to be clear, I am not urging anyone to propagate Buddhism, but I am talking about developing a kind heart.”

“Today, I would like to urge all of you who have gathered for this meeting to consider ways to revive and advance the essence of Tibetan culture, which is about keeping in mind the well-being of others. And it would also be beneficial if you could work to train people in educational institutions about such human values as kindness and honesty. That’s all for now – thank you!” His Holiness concluded.