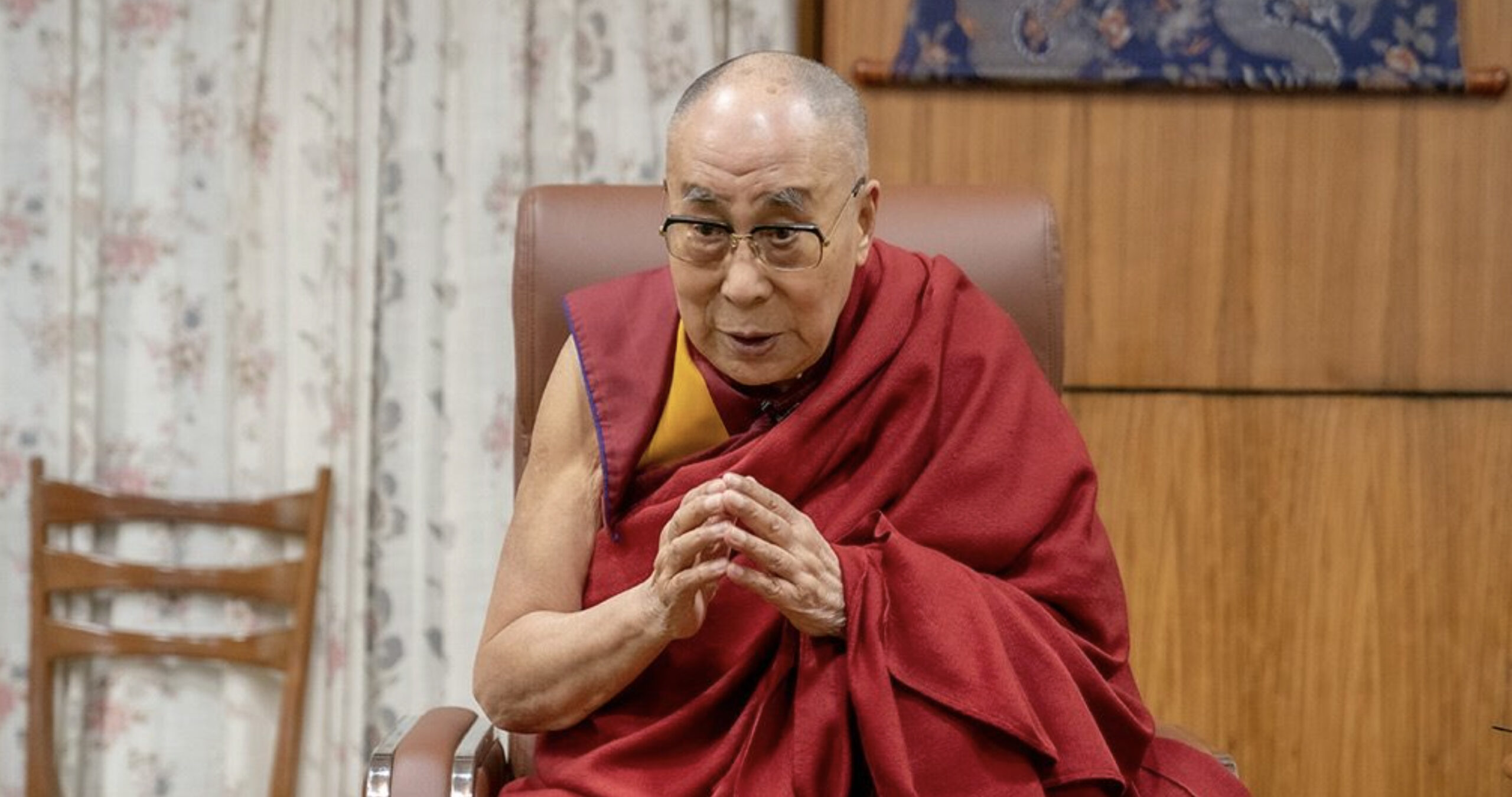 His Holiness the Dalai Lama delivering a video message on the auspicious occasion of Vesak.

In the video message, His Holiness said:

First of all, my greetings to you all with my wish that you be well in health and spirit. Today, we are celebrating Vesak which commemorates the Buddha’s attainment of enlightenment after six years of austerity. On the basis of his own experience, the Buddha advised: O monks and scholars, just as gold is tested by heating, cutting, and rubbing it, so likewise you should thoroughly examine my teaching. And only then accept it – not merely out of respect for me. This point of view reveals a special quality of the Buddha.

I respect all religious traditions. They are all of great value because they all teach compassion. However, only the Buddha asks us to examine his teachings in the way that a goldsmith tests the purity of the gold. Only the Buddha commends us to do that. Another of his principle instructions was this:

Sages do not wash away unwholesome deeds with water,
Nor do they remove the sufferings of sentient beings with their hands,
Neither do they transplant their own realisations into others,
It’s by teaching the truth of suchness that they liberate beings.

So, the Bhagwan Buddha, the Enlightened one, who is by nature compassionate, says that he cannot simply transfer his own spiritual experience and realisation into his disciples out of love and compassion for sentient beings. Disciples must develop their own spiritual experiences by reflecting on the truth of suchness as the Buddha explained it. Therefore, I find his three turnings of the wheel of Dharma to be very significant. The first turning of the wheel teaches the four noble truths – true suffering, true origin of suffering, the true cessation of suffering, and the true path that leads to that cessation. This serves as the basic framework of the teaching of the Buddha. If we pay more attention to the true cessation of suffering, the question arises, “How is it brought about?” The answer to this question involves an explanation of the ultimate nature of the mind. We learn that all mental afflictions such as desirous attachment, hatred and ignorance are rooted in our misconception of the way self and (other) things exist. For this reason, the Bhagwan gave the Perfection of Wisdom teachings at Vulture’s Peak. He propounded the fourfold emptiness described in the Heart Sutra: Form is emptiness, emptiness is form, emptiness is not other than form; and form too is not other than emptiness. The most powerful antidote to our grasping at an independently existing self is the wisdom that realises everything lacks an absolute identity. It’s because of this that it is possible to achieve the true cessation taught in the First turning of the Wheel. We need to find out whether there is a counterforce to our misconception of the absolute self or not, and if there is, whether we can fully acquaint ourselves with that counterforce or not. If we can, then we can eliminate the misconception of an absolute self. So, it is quite scientific.

The Buddha gave the cycle of teachings called the Perfection of Wisdom at Vulture’s Peak. In these discourse, the Buddha taught that everything lacks any inherent existence. However, this was difficult for some of his disciples to comprehend. Therefore, in order to address the difficulty some disciples had in understanding the lack of inherent existence, and to suit the intellectual calibre of such disciples, the Buddha also taught that everything can be identified with the mind. This teaching led those disciples to understand the non-duality of objects and subjects, instead of saying that we perceive whatever appears to our mind as possessing inherent existence. This reveals the profundity of the Buddha’s teaching in philosophical terms.

As for me, I am a simple Buddhist monk following the tradition of the Buddha. Every morning as soon as I wake up, I recite In Praise of Dependent Arising, and reflect on the interdependent nature of things as well as the altruistic spirit of enlightenment. I find them very helpful to my mind. When you study the great Master Nagarjuna’s explanation of The Perfection of Wisdom Sutras in his Wisdom: The Fundamental Stanzas of the Middle Way you marvel at it. The deeper your understanding of emptiness becomes, the more compassionate you feel about those who are engrossed in attachment and anger due to their not knowing about emptiness. You have a strong wish to help them eliminate their ingrained ignorance of reality, don’t you? It is really helpful. We should not be contented with just considering the Buddha as a holy being. Of course, there are the Buddha’s twelve enlightening deeds such as residing in the Tushita Heaven as a regent, leaving the Tushita Heaven and so forth. Other religious traditions also tell similar stories about their founder-teachers. However, reflecting on the qualities of the founding-teacher, by analysing what he said is something peculiar to the advice the Buddha gave. The more you examine his teachings through logic and reasoning, the more certain you feel about it. What distinguishes it is that it will help you reduce your ignorance about self and phenomena being truly existent. In this connection, I recite the following verses from Entering the Middle Way by Chandrakirti.

Thus illuminated by the rays of Wisdom’s Light,
The Bodhisattva sees as clearly as a gooseberry on his open palm,
That the three realms in their entirety are unborn from their very start,
And through the force of conventional truth, he journeys to cessation.
Though his mind may rest continuously in cessation,
He also generates compassion for beings bereft of protection,
Advancing further, he will outshine through his wisdom,
All those born from the Buddha’s speech and the Middle Buddhas,
And like a King of swans soaring ahead of other accomplished swans,
With white wings of conventional and ultimate truths spread wide,
Propelled by the powerful winds of virtue, the Bodhisattva would cruise,
To the excellent far shore, the oceanic qualities of the conquerors.

I reflect on these lines daily and hope with the help of the two wings of conventional and ultimate truth to traverse the Bodhisattva grounds and so be able to say Bye Bye to the level of an ordinary being. This person who was born in a remote place in Do-Me (Amdo Province, northeastern Tibet), as indicated by the three letters A-Ka-Ma seen in the lake of Palden Lhamo, with whom I have a karmic connection because of past prayers. Due to the force of my past aspirations, I am convinced about the view of emptiness and the courageous heart of the Bodhichitta. I find these practices really helpful to my mind. So, on this special occasion, I wish to urge my dharma friends to pay more attention to the word of our founding-teacher, the Buddha. First study the teaching and reflect on the four noble truths which outline the means within which the Buddha worked to help us. In addition to that you should cultivate the courageous heart of Bodhichitta to serve others. In this way, we can help develop true peace of mind within ourselves, which in turn will create a serene atmosphere around us. My dharma friends, please keep this in mind.

That’s all. Thank you.