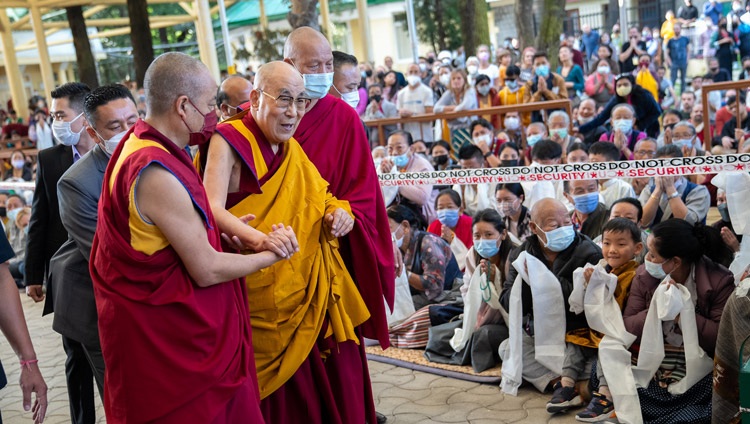 His Holiness the Dalai Lama walking to the Main Tibetan Temple on the second day of teachings in Dharamsala, HP, India on October 4, 2022. Photo by Tenzin Choejor.

The ‘Heart Sutra’ was chanted first in Chinese and then in Tibetan.

Before resuming his reading of the ‘Commentary on Valid Cognition’, His Holiness mentioned a verse from a tantric text about emptiness and the nature of the mind that indicates that cyclic existence is devoid of inherent existence.

“In this world,” he continued, “things appear to be independently existent, but when we try to pinpoint their identity, we are unable to do so. Understanding that things lack any essential nature will free us from cyclic existence. Our misconception that things are inherently existent can be eliminated. We can observe that in day-to-day life, when we are angry or attached to something or someone, the object of our anger or attachment appears to be inherently existent.

“Attachment, anger and hatred are rooted in ignorance. They disturb our peace of mind. But when we are able to do away with clinging to the notion of inherent existence, we can make progress on the path.

In Chapter 22 of his ‘Fundamental Wisdom of the Middle Way’ Nagarjuna writes about how we cannot pinpoint the identity or independent existence even of the Buddha, the Tathagata, the One Thus Gone.” 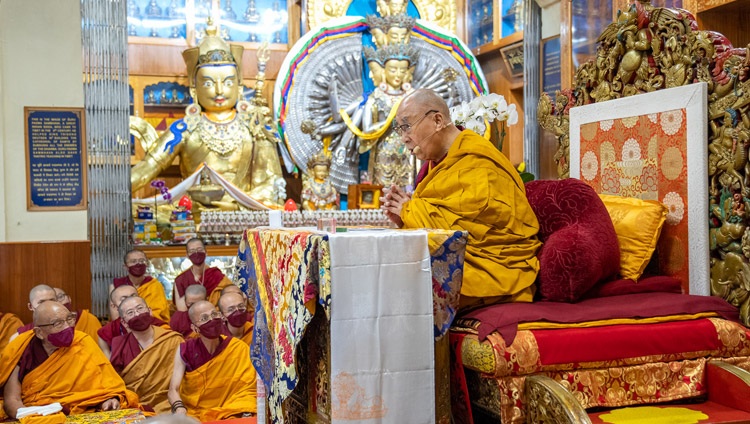 His Holiness the Dalai Lama speaking about the conditions in Tibet on the second day of teachings at the Main Tibetan Temple in Dharamsala, HP, India on October 4, 2022. Photo by Tenzin Choejor

His Holiness added that he often reworks this to refer to himself and reflects on it accordingly:

“For hundreds of years human beings have fought and killed each other. They have developed ever more lethal weapons to do so, and yet if we ask what actually disturbs our peace of mind, it’s mental afflictions, disturbing emotions. The nature of the mind is clear and empty.

“All religions teach us to be kind to each other, but it’s a special feature of the Indian traditions to examine the nature of self. Some of them describe a self known as ‘atman’. Buddhism doesn’t recognize this. What Buddhism asserts in that a person only appears to exist inherently. If we look at it from the point of view of cause or effect, nothing can be found that is inherently existent. The way we misconceive the existence of self is the cause of all our problems. It contributes to our self-cherishing attitude and that means we have little concern for others.”

His Holiness mentioned the opening verses of Chandrakirti’s ‘Entering into the Middle Way’ which pay homage to compassion.

Sravakas and middle-level buddhas arise from sovereign sages.
Buddhas are born from bodhisattvas.
The compassionate mind and nondual cognition
as well the awakening mind: these are causes of bodhisattvas. 1.1

As compassion alone is accepted to be
the seed of the perfect harvest of Buddhahood,
the water that nourishes it, and the fruit that is long a source of enjoyment,
I will praise compassion at the start of all. 1.2

First, with the thought “I am,” they cling to a self;
then, with the thought “mine,” they become attached to thingslike buckets on a waterwheel, they turn without control;
I bow to the compassion that cares for such suffering beings. 1.3

We talk hopefully about achieving peace in the world, His Holiness observed, but what we need to do is to strengthen peace within ourselves by weakening the way we cling to things being independently existent. Until we defeat this misconception, we won’t fulfil our wish. 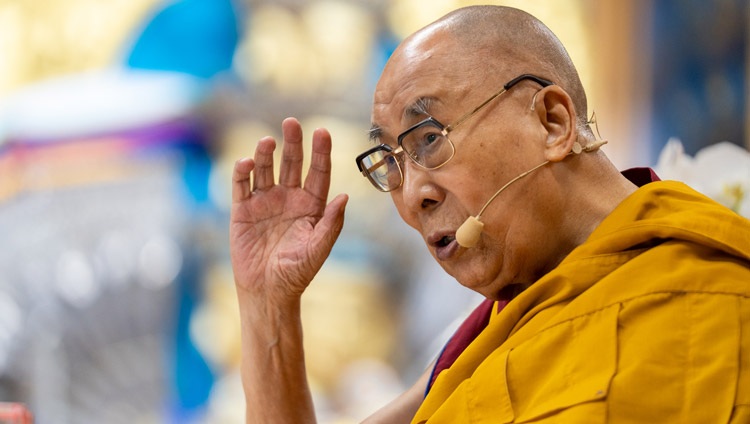 His Holiness the Dalai Lama addressing the congregation on the second day of teachings at the Main Tibetan Temple in Dharamsala, HP, India on October 4, 2022. Photo by Tenzin Choejor

As he picked up the ‘Commentary on Valid Cognition’ from where he stopped yesterday, His Holiness made the point that all Tibetan Buddhist traditions use logic and reason. Similarly, although all Buddhist schools of thought discuss ignorance, it is the Prasangika Madhyamika that explains it precisely.

Today, His Holiness read up to verse 281 and stated that he will read the remaining verses tomorrow. In the meantime, he announced that he would like to conduct a ceremony to generate the All-encompassing Yoga Mind, something he practises every day. It involves generating conventional bodhichitta—the awakening mind, the aspiration to achieve enlightenment for the sake of all sentient beings and then visualizing this aspiration as a moon disc at the heart. The second part of the practice is to generate ultimate bodhichitta—the wisdom understanding emptiness—and visualizing that as a five-pronged white vajra standing on the moon disc.

His Holiness led the congregation in reciting the All-encompassing Yoga Mind mantra: Om Sarva Yoga Chitta Utpadaya mi and remarked that these two practices, understanding emptiness and cultivating bodhichitta, are the ultimate cause of Buddhahood. He declared that although he has received many tantric empowerments, these two are the essence of his own practice and urged those who consider him to be their teacher to make them the essence of their practice too.

Finally, he spoke about conditions in Tibet.

“Currently, it is reported that Tibetans inside Tibet are facing severe restrictions as a result of the coronavirus pandemic’s spreading in Tibet. The public is facing great difficulties.

To some extent, the Tibet-China struggle is linked to the Buddha’s teaching. The Chinese can never change the mindset and behaviour of the Tibetan people, which are rooted in their religion and culture. Rather, the Tibetan Buddhist tradition and its associated culture will gradually spread further and further into China itself.
You do not need to feel disheartened when faced with temporary difficulties. We Tibetans have a unique karmic connection with Avalokiteshvara, who is our guardian deity. Therefore, you should pray to the three enlightened deities in Lhasa: Jowo Lokeshvara, Jowo Shakyamuni, and Jowo Akshobyavajra.

“Although you are physically distant from me, since we have an uncommon connection based on our karma and prayers, you can think of me, Gyalwa Rinpoche, the Dalai Lama.

“What is most important is that you should feel at ease and trust that the truth will eventually prevail.

“As for myself, I am now 87 years old and in good health. My doctors have assured me after examining me that I will live for another 15 to 20 years. So, you Tibetans in Tibet, please feel at ease and be happy.

China is changing. The day will come when we, Tibetans in exile and Tibetans in Tibet, will be reunited and can meditate together on bodhichitta and the view of emptiness. I send you my greetings— “Tashi Delek”. Thank you.” 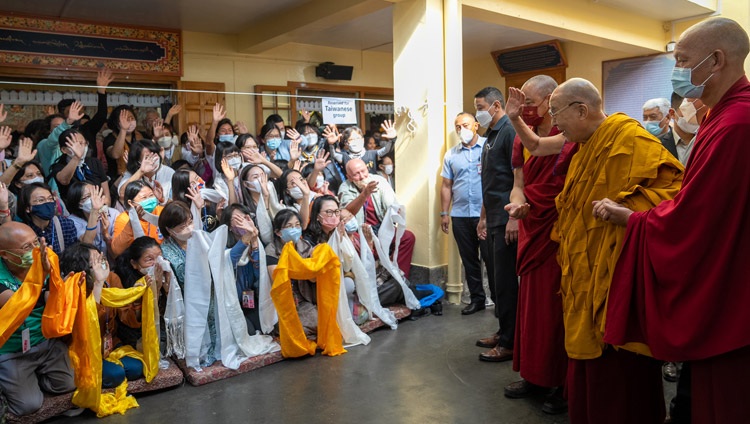 His Holiness the Dalai Lama waving to members of the audience from Taiwan as he departs at the conclusion of the second day of teachings at the Main Tibetan Temple in Dharamsala, HP, India on October 4, 2022. Photo by Tenzin Choejor