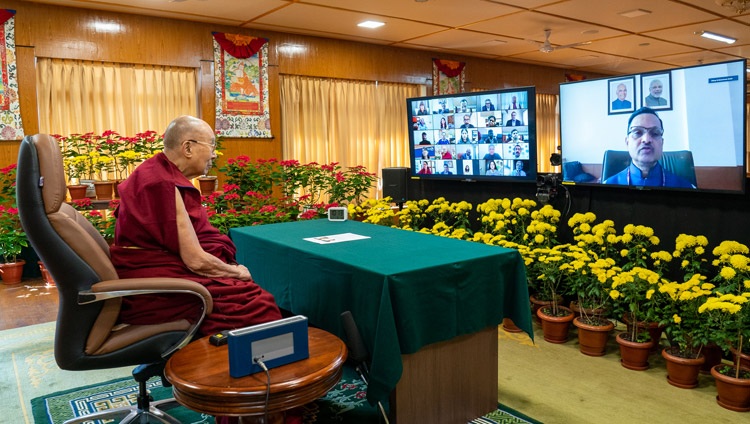 Maj. Gen. Manoj Kumar Bindal, Executive Director of the National Institute of Disaster Management, India, welcoming His Holiness the Dalai Lama at the start of the online program on Compassion and Love on November 17, 2021. Photo by Ven Tenzin Jamphel

His Holiness the Dalai Lama was the virtual guest of the National Institute of Disaster Management, India, this morning and was welcomed by its Executive Director, Maj. Gen. Manoj Kumar Bindal. He invited His Holiness to speak about compassion and love in the context of disaster management.

“Firstly,” His Holiness began, “I want to say ‘Namaste’ in the Indian way and secondly, ‘Tashi Delek’, as we say in Tibetan.

“India and Tibet have quite amazing special relations. In the seventh century, the Tibetan Emperor had close relations with the Chinese imperial family, having married a Chinese princess, and we may imagine enjoyed Chinese food and other things. Nevertheless, when considering how to shape a Tibetan form of writing, he was disinclined to follow the Chinese tradition and instead chose to design a Tibetan alphabet modelled on the Indian Devanagari script.

“Traditionally we look to India, not only as the Sacred Land, but also as the source of our knowledge. The Buddha was an Indian, he taught in India. There is the Pali Tradition, followed primarily in Sri Lanka, Burma, Thailand and so forth, and there is the Sanskrit Tradition. In the eighth century, the Tibetan Emperor invited the pre-eminent scholar of Nalanda University, Shantarakshita, to Tibet. Acknowledging that Tibetans had their own written language he encouraged them to translate Indian Buddhist literature into Tibetan. The result was the Kangyur that consists of 100 volumes of words spoken by the Buddha and the Tengyur comprising more than 200 volumes of treatises by subsequent, mostly Indian, masters such as Nagarjuna and Asanga.

“Followers of the Sanskrit Tradition took to heart the Buddha’s advice not to accept what he taught at face value, but to question and investigate it. Dharmakirti’s ‘Compendium of Valid Cognition’ and Chandrakirti’s ‘Entering into the Middle Way’ were key treatises of the Nalanda Tradition for the light they cast on logic and the Madhyamaka point of view. I keep Chandrakirti’s ‘Entering into the Middle Way’, as well as his commentary to it, on my table and read them every day.

“As a child I was a reluctant student, but I memorized sections of these texts day by day and recited what I’d learned to my tutor.

“Because our training is based on logic and reason, we have been able to hold useful conversations with scientists. Among the topics we’ve discussed have been the workings of the mind and how to transform destructive emotions. I’m proud of being able to combine Buddhist philosophy with a scientific outlook. I like to think like my friend Francisco Varela, who was scientist also deeply interested in Buddhism. He would say, ‘Now, I’m wearing my Buddhist hat, or now, I’m wearing my scientist’s hat’, according to the point of view he was advocating. The time has come to combine modern education with ancient Indian knowledge, on the basis of which we can make a significant contribution to knowledge on this planet. 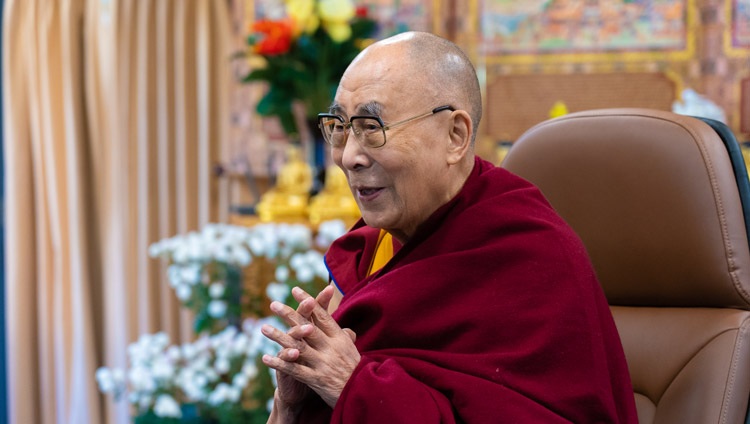 His Holiness the Dalai Lama answering questions from the virtual audience during his online talk on Compassion and Love organized by the National Institute of Disaster Management, India, from his residence in Dharamsala, HP, India on November 17, 2021. Photo by Ven Tenzin Jamphel

“With regard to disaster management, whether our actions are positive or not depends on our motivation. The key factor is whether we have a compassionate attitude. India has longstanding traditions of ‘ahimsa’, doing no harm, and ‘karuna’, compassion. The crucial question is whether they can be combined with a modern outlook.

“In the past, Mahatma Gandhi showed how ‘ahimsa’, as non-violence could be applied in practical terms. His achievements were admired and emulated by such figures as Nelson Mandela and Bishop Tutu in South Africa and Martin Luther King in the USA. Doing no harm and non-violence are not only morally correct, they are practically appropriate too.”

His Holiness observed that he has spent the majority of his life in India and that his brain is filled with Indian knowledge. He declared that he is a refugee, but Pandit Nehru gave him a home, first in Mussoorie and later in Dharamsala. He remarked that when he first moved from Mussoorie to Dharamsala he felt he was leaving a well-connected location for somewhere remote, but the Political Officer accompanying him, Pt Pant, predicted that Dharamsala was the place from where the Dalai Lama’s message would reach the entire world.

“At the time I thought he was exaggerating, but he may have been right. Anyway, I’m happy to be able to share what I understand of ancient Indian knowledge that can contribute to creating a more peaceful world by helping people discover peace of mind. Since everyone wants to live in peace, we have to understand that fighting, killing and spending huge sums of money on weapons is out of date. We have to transform the world on the basis of reason and education.”

In answering questions from the audience His Holiness emphasized that since religious practice is a means to gain peace of mind, and since all religious traditions at their core teach about compassion, they are all worthy of respect. He noted that because all sentient beings wish to be happy and everyone has a right to be happy and free from suffering, ‘karuna’ or compassion has a bearing on democracy too.

With regard to the way human beings relate to technology and the environment, His Holiness advised that we always need to look at things from a broad holistic perspective. We should not forget that technology is meant to serve humanity and that we must be alert to protecting the environment.

A scientist who spoke of facing unacceptable injustice and humiliation wanted to how to respond to harmful behaviour with compassion. His Holiness told him that in order to be happy, it’s necessary to do no harm, ‘ahimsa’, and treat everyone with compassion, ‘karuna’. He mentioned the importance of recognizing that the core of religious practice is not like a divisive political policy. Its essence is compassion, in the light of which there is no basis for discrimination or conflict with others. By and large, he added, India is an example of all religions living peaceably together.

Commenting that modern education systems pay little attention to the ways to develop peace of mind, His Holiness recommended taking steps to promote ‘ahimsa’ and ‘karuna’.

“We all appreciate our mother’s affection when we are small,” he said, “but as we grow up love and affection seem to be less relevant. However, the practice of compassion is about being a peaceful person here and now. One aspect of ‘karuna’ or compassion is to recognise that other people are just like us. As social animals, we have a natural tendency to help each other. Nevertheless, I really admire those people and organizations who step in to help people overwhelmed by disaster.

“The Covid-19 pandemic has also brought many opportunities to help people who have fallen ill or are beset with grief about relatives they have lost. Seeing others in difficulties is not a reason to feel demoralized, it should strengthen our sense of compassion.”

His Holiness remarked that in the past scientists didn’t pay much attention to the role of inner peace. This has changed and the importance of achieving peace of mind in the cultivation of physical and mental well-being is becoming much better understood. The disruptive effect of destructive emotions like anger and fear, and the way they give rise to anxiety, is also more clearly appreciated. Likewise, there is a growing recognition that compassion brings patience and a more realistic approach to problems. His Holiness cited Shantideva’s advice to examine whether difficulties can be overcome. If they can, that’s what to do; if they can’t, worrying about them will not improve the situation.

“I lost my country, my freedom and witnessed so much destruction,” His Holiness recalled, “and yet I still feel that my Middle Way Approach, seeking genuine autonomy that allows us to preserve our culture, is a realistic option. What’s more, increasing numbers of Chinese brothers and sisters are taking an interest in Buddhism and can learn from our traditions.” 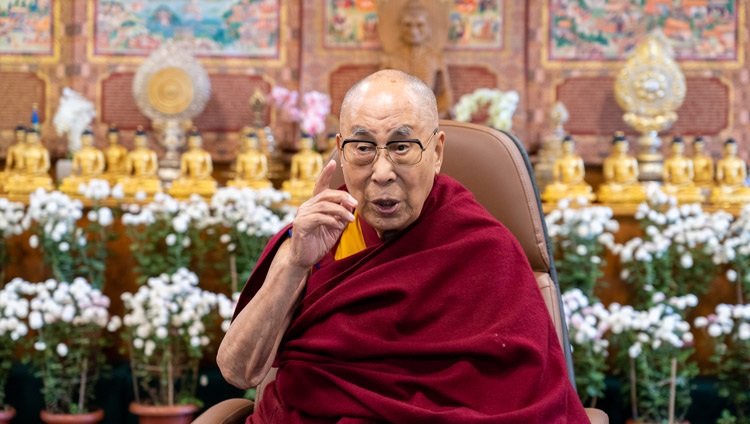 His Holiness the Dalai Lama addressing the virtual audience during his online talk on Compassion and Love organized by the National Institute of Disaster Management, India, from his residence in Dharamsala, HP, India on November 17, 2021. Photo by Ven Tenzin Jamphel

Asked about how we can reconnect with nature and save the planet, His Holiness first declared that all seven billion human beings are essentially the same in that they experience the same emotions and seek to live a happy life. This is the basis on which he talks about the oneness of humanity. Cultivating a healthy environment isn’t just a question of protecting our country or our continent, it’s about protecting the whole planet and ensuring a safe and happy life for the whole of humanity.

Maj Gen Bindal summed up the conversation and thanked His Holiness for highlighting four points—that the essence of all religious traditions is ‘karuna’ and ‘ahimsa’; that education provides us with the means to develop compassion and achieve peace of mind; that we need to look at ways to combine ancient Indian knowledge with modern education and finally that we need to be aware of the oneness of humanity.

Prof Santosh Kumar also thanked His Holiness for elaborating on love and compassion, empathy and joy and for confirming the essential role of compassion, not only in disaster management, but even in ordinary human relations.

“I’m very happy to have had his opportunity to talk to you about ‘karuna’ and ‘ahimsa’ that are key elements of your own ancient Indian tradition,” His Holiness responded. “The world at large needs to be aware of these qualities. Sharing these ideas on a secular basis with as many people as we can will be of immense benefit. Thank you.” 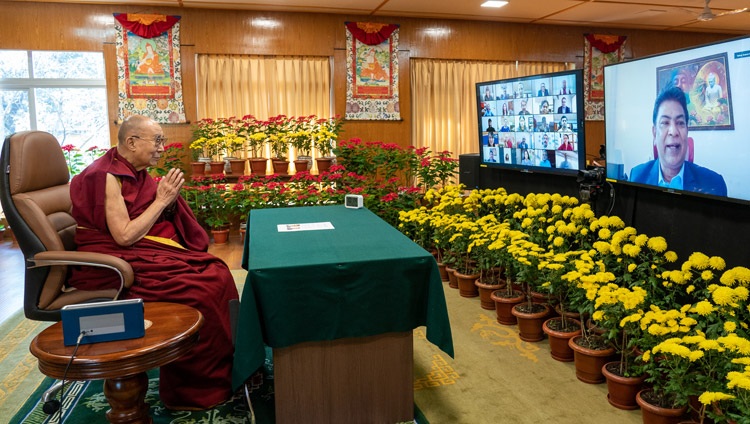 Prof Santosh Kumar, moderator the the question and answer session, thanking His Holiness the Dalai Lama for his talk on Compassion and Love organized by the National Institute of Disaster Management, India, from his residence in Dharamsala, HP, India on November 17, 2021. Photo by Ven Tenzin Jamphel