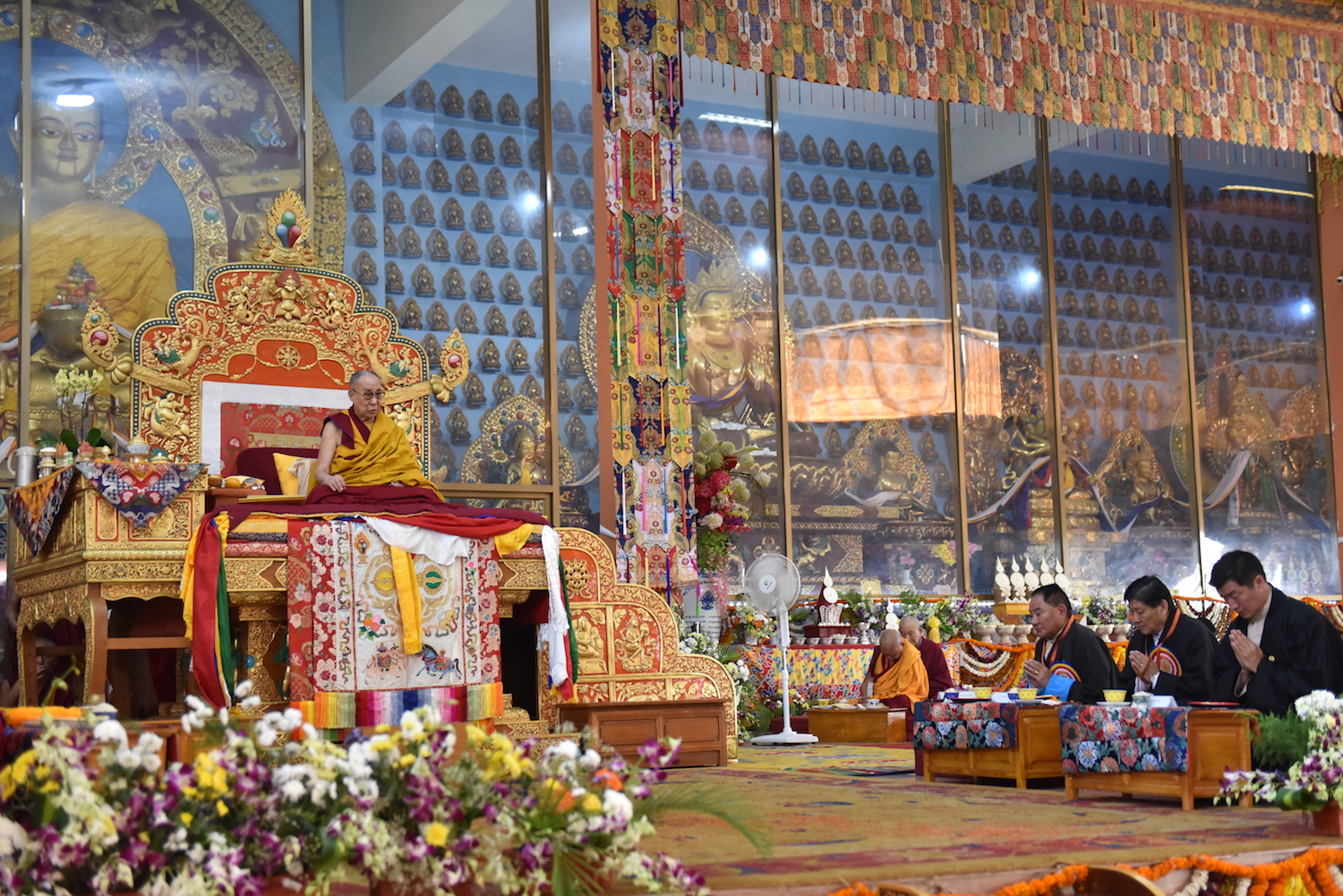 The heads of the three pillars of Tibetan democracy bow in respect and devotion as His Holiness the Dalai Lama addresses the long life prayer offering at Gaden Jangtse Monastery in Mundgod, 22 December 2019. Photo/Tenzin Jigme/CTA

Mundgod: When His Holiness the Dalai Lama came down to the Ganden Jangtsé Assembly Hall this morning, the Ganden Throne-holder, Sharpa and Jangtsé Chöjés and the Drepung Throne-holder were there to receive him. They escorted him into the hall where he greeted the audience and guests, lit a lamp before the images of enlightenment and took his seat on the high throne.

Auspicious prayers were chanted, including the ‘Praise to the 17 Masters of Nalanda’. Tea and sweet rice were served.

Before the ceremony proper began, His Holiness addressed the gathering.

“Today, there are monks from the two monasteries of Ganden, Drepung and Sera here. Monks of the Three Seats of Learning have assembled to offer a Long-Life Ceremony. As I mentioned yesterday, the First Dalai Lama, Gendun Drup, prayed to Arya Tara, “May I strive and persevere in preserving the tradition of Buddhism in general and that of Jé Tsongkhapa in particular”.

“We have representatives of the monastic community on the one hand and of the Central Tibetan Administration (CTA) on the other. Since this is an auspicious occasion, I decided to wear this Dharma cloak blessed during ordination. I also put on all three monk’s robes. 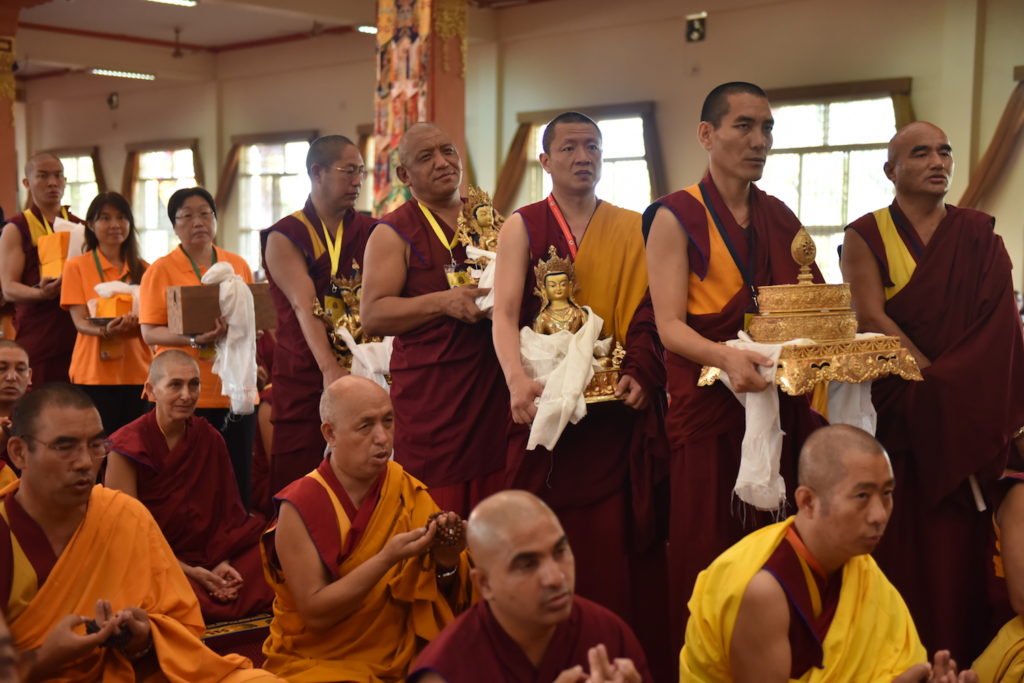 Monks of the Three Seats of Learning and other devotees in procession during the long life prayer offering to His Holiness the Dalai Lama. Photo/Tenzin Jigme/CTA

“The longer I live, the more I think of benefiting others and fulfilling the highest aim myself. In order to fulfil the interests of self and others I generate bodhichitta. This altruistic intention to serve others can contribute to longevity. Selfishness is not conducive to living longer. I am determined to serve the 7 billion human beings alive today and some kind of benefit seems to come from it.

“We have members of the monastic community, representatives of the CTA and dharma brothers and sisters from Chinese communities here.

“Just as I cultivate an altruistic intention, I’ve had dreams about living long. In one dream I was climbing steps, 13 steps, which I interpreted to relate to the prediction that I could live to the age of 113”—applause rippled across the audience. “Since the time of Gendun Drup, the Dalai Lamas have had close relations with Palden Lhamo. I had a dream in which she told me I’d live to be 110”—there was more applause. “Meanwhile, Trulshik Rinpoché requested me to live as long as Thangtong Gyalpo. He is said to have lived until he was 125; may I do so too.

“There are many different factors conducive to living long and I am determined to do so. In fact, since I am so determined, there may not be much need to conduct this Long-Life Ceremony.

“As part of the proceedings the Nechung Oracle will go into trance. Since the time of King Trisong Detsen, Shantarakshita and Guru Padmasambhava worldly spirits have been working with people to serve the Dharma and sentient beings. Some of these protectors came from India. Others, like Nyenchen Thangla, were indigenous to Tibet. Since formless spirits have no form, there’s only so much they can do. Those of us who have a physical form can be helpful to others in ways that these spirits cannot. 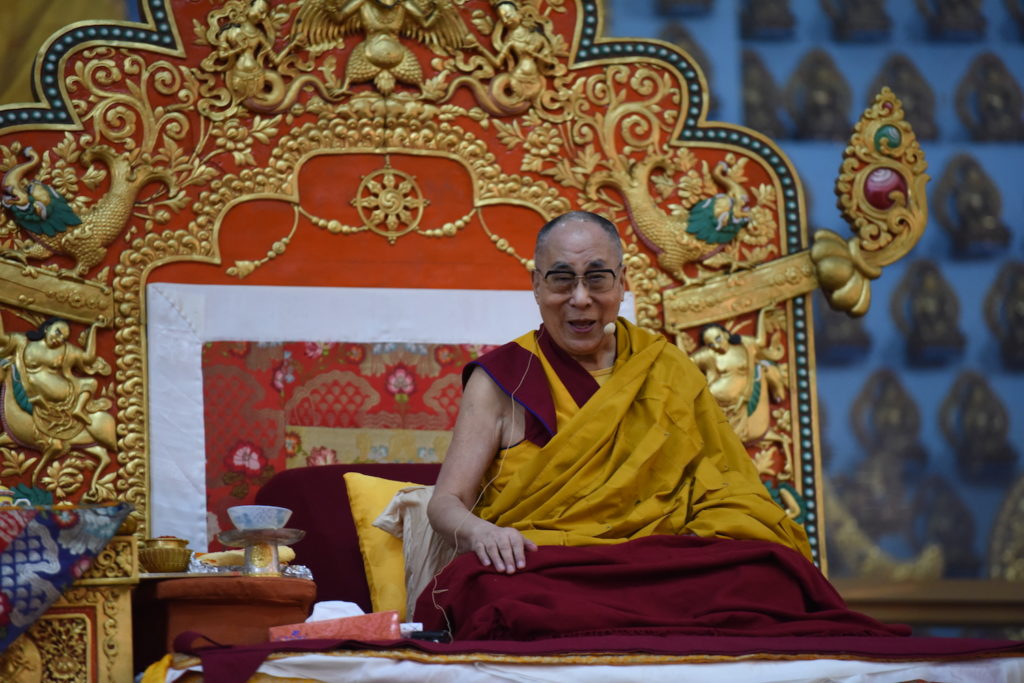 His Holiness the Dalai Lama reassures once again that he will live over 113 years to serve the millions of devotees and humanity at large. Photo/Tenzin Jigme/CTA

The Jangtsé Chant Master began to chant the Long-Life Ceremony according to the Offering to the Spiritual Master (lama chö-pa) and many of the guests joined in. At a certain point the Nechung Oracle entered the Hall through the main door and came loping up to the throne. He paid respect to His Holiness, offering him a mandala and the threefold representations of the Buddha’s body, speech and mind. After conversing with His Holiness, he circumambulated the throne and rushed down to salute the Ganden Throne-holder, his predecessor and other hierarchs.

Coming before His Holiness again he brought him a small silver vajra attached to a multi-coloured thread and distributed similar vajras to other Lamas while keeping one for himself. He then sat on a folding stool, holding the vajra to his heart, while he and the other Lamas recited a prayer His Holiness wrote for the flourishing of all major traditions of Tibetan Buddhism. This was a rite that serves to strengthen the bond between guru and disciple. Once the recitation was complete the Oracle got to his feet and left the temple through a side door.

Tsog offerings were conducted. The Ganden Throne-holder made a formal request to His Holiness to live long and offered him a mandala and the threefold representations of the Buddha’s body, speech and mind, as well as a series of other symbols. A long procession of monastics, laymen and women, Tibetans and people from abroad, carrying offerings, wound through the Hall.

Among the concluding prayers was one composed by Trulshik Rinpoché that recounts the incarnations of Avalokiteshvara in Tibet, culminating in the line of Dalai Lamas. Another was the prayer for His Holiness’s long life composed by his two tutors, Ling Rinpoché and Trijang Rinpoché.

Finally, a ceremony was conducted for 298 Lharampa Geshés, who graduated in 2017, 2018 and 2019, to be awarded their degrees. The Ganden Throne-holder presented each one with his certificate, following which they gathered in groups around His Holiness in order to have their photograph taken with him.

The morning’s ceremonies complete, His Holiness returned to his quarters at the top of the building. 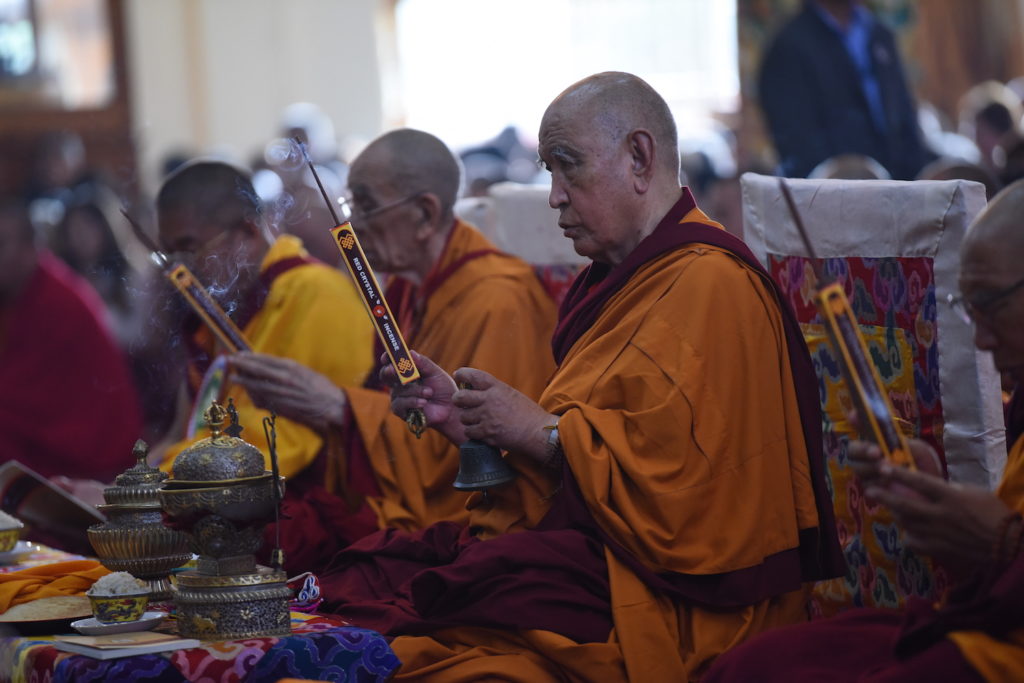 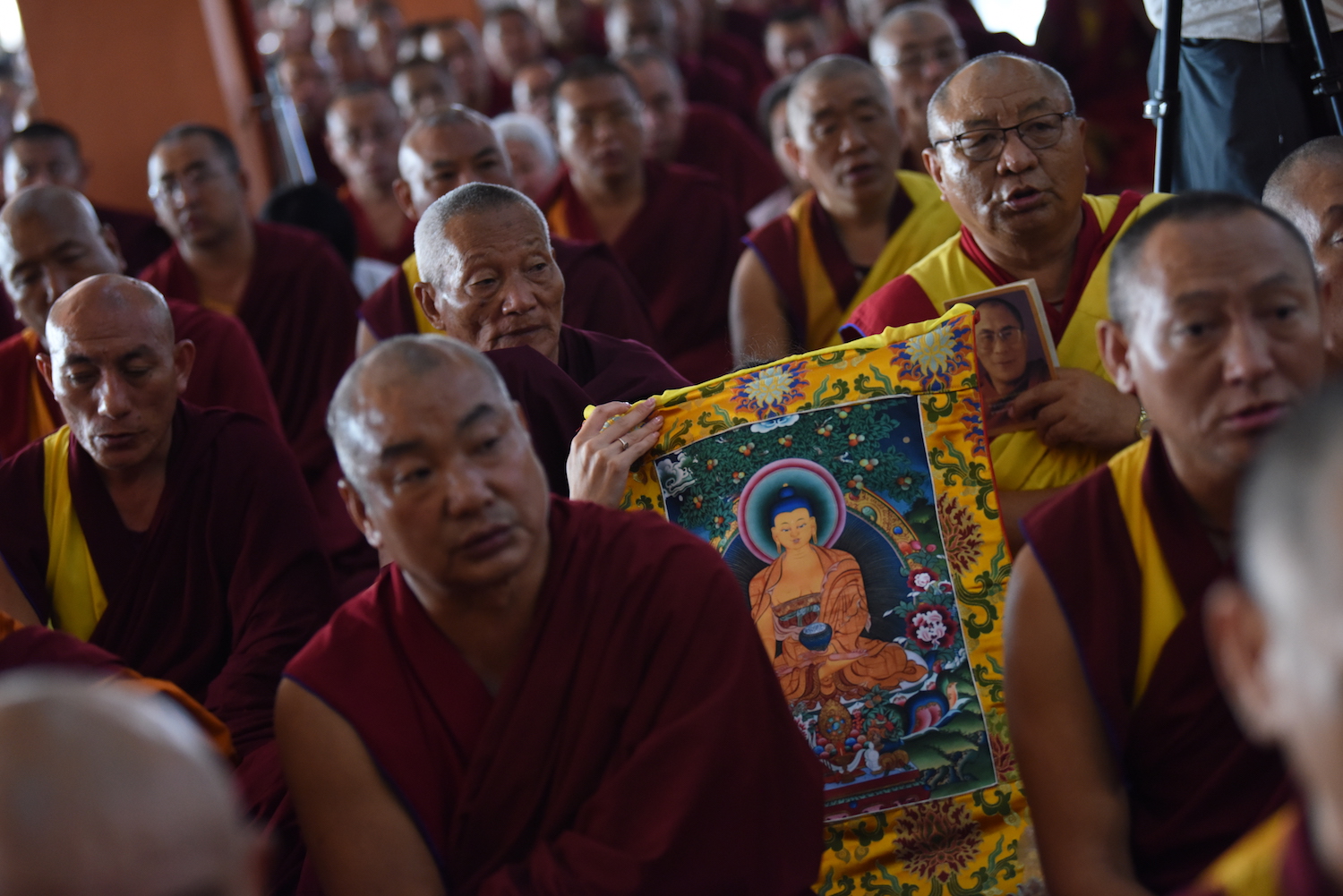 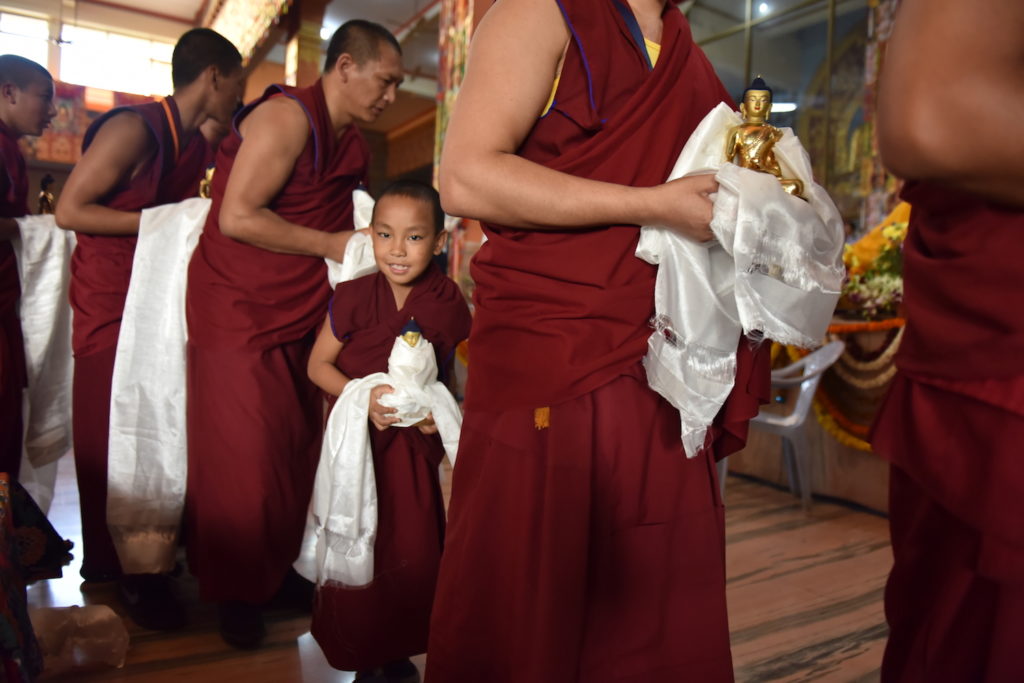 Monks in procession holding Buddha statues as offerings to His Holiness the Dalai Lama. Photo/Tenzin Jigme/CTA 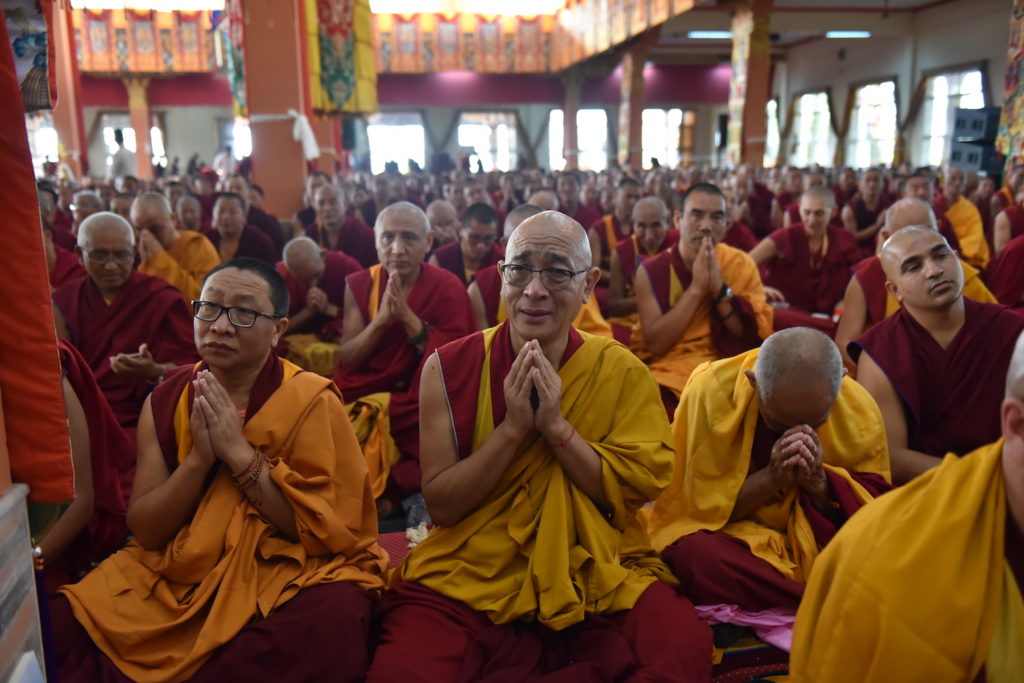 Thousands of monks join in prayers for the long life of HIs Holiness the Dalai Lama. Photo/Tenzin Jigme/CTA