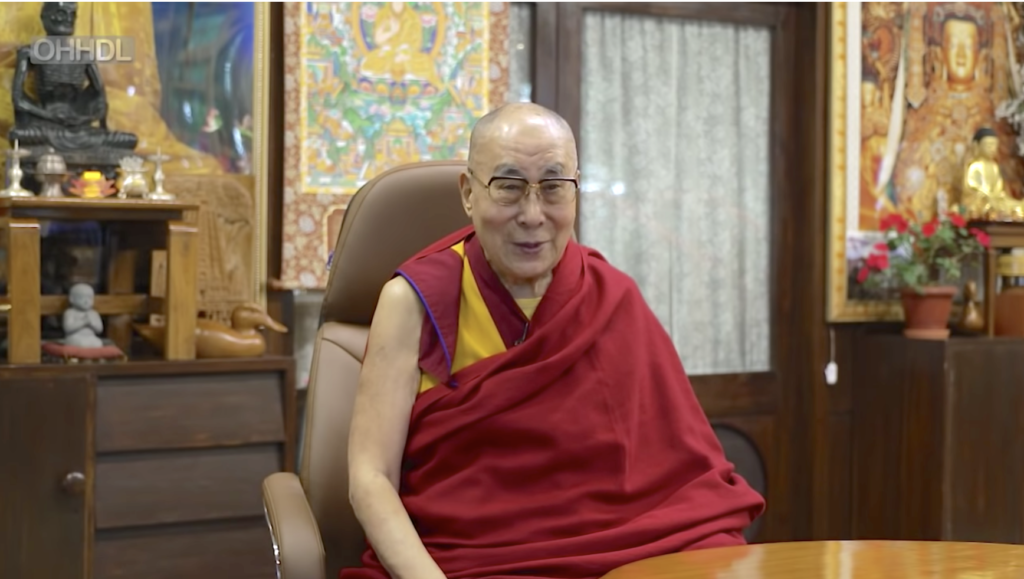 His Holiness the Dalai Lama during his talk on Compassion – The Answer to Today’s Troubled World to students from several Indian educational institutions from his residence in Dharamshala, 29 July 2020. Photo/Screengrab image

Prof Raman Mittal of the Delhi University Law Faculty gave a short welcome address. He acknowledged that the world is going through difficult times during which everyone has been reminded of the fragility of life. Forced to turn inward, they sought His Holiness’s guidance with regard to compassion and hope.

“When we face problems and difficulties,” His Holiness responded, “I find it useful to rely on the 8th century Nalanda master, Shantideva’s advice. Analyse the problem that confronts you. Examine whether it can be overcome. If it can, there’s no need to worry. Put the solution into effect. If the problem can’t be overcome, worrying about it won’t help. I find this to be a very realistic assessment.

“If we have only a narrow, short-sighted outlook, our problems can seem to be huge. But if we look at them from a wider perspective, they don’t seem to be so daunting.

“Great Indian masters in ancient times suggested that galaxies have a beginning and an end. Whatever has a cause, logically must come to a conclusion. Our sun had a beginning, so eventually it too will come to an end. In such a context, our immediate problems are relatively small.

“There is also mention in ancient texts that the universe may be consumed by fire, water or wind. Present indications of global heating suggest that in our era the end will be by fire. Scientists say that unless changes are made, global heating will reach a point where lakes and rivers run dry and what is now green land will turn to desert. In such a wider context, disagreements between human beings diminish in significance.

“Meanwhile, the consequences of this pandemic have been very sad, but we must face it as best we can. Research must go on into how to deal with it. I believe that traditional medical traditions may have something useful to contribute. In the 8th century, the Tibetan Emperor, Trisong Detsen, convened a conference of practitioners of Ayurveda, traditional Chinese medicine, Tibetan medicine and other traditions to share their knowledge. A similar conference today with allopathic physicians could be fruitful.” 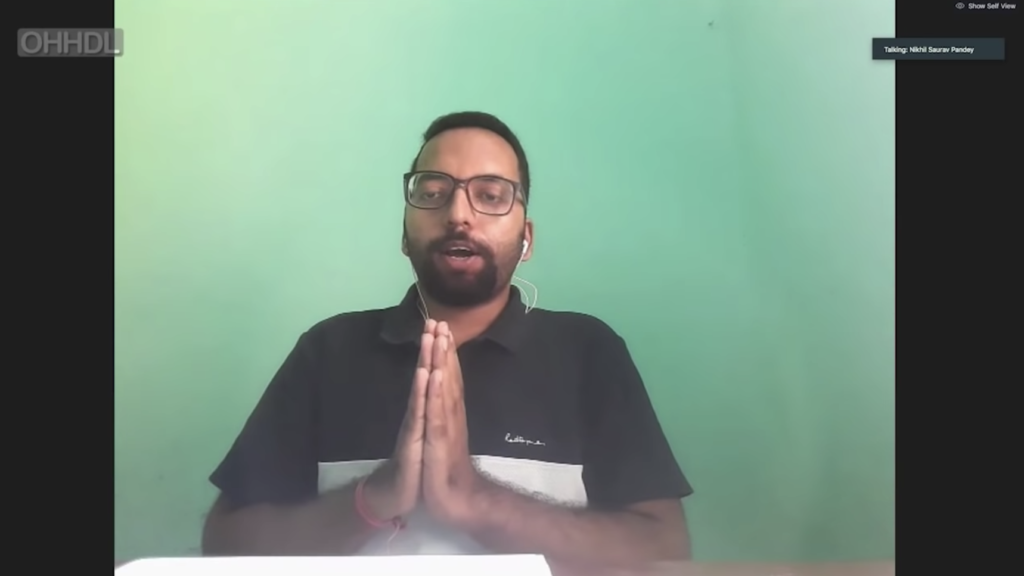 One of the participants asking His Holiness the Dalai Lama a question during his interaction with students from Indian educational institutions,  29 July 2020. Photo by Ven Tenzin Jamphel/OHHDL

His Holiness remarked that whatever problems we face, it’s always better to be honest and truthful. He reiterated his belief that if we revive the ancient Indian traditions of ‘ahimsa’ and ‘karuna’, non-violence and compassion, humanity will be happier. He declared himself a disciple of these traditions, whose aim is to create a more compassionate society. Both ‘ahimsa’ and ‘karuna’ arose out of the practices for cultivating concentration and wisdom. These are common to the meditative practices of Hindus, Samkhyas, Jains and Buddhists alike. Cultivating compassion contributes to peace of mind.

His Holiness pointed out that in order to remain healthy we observe codes of physical hygiene, but, in addition, we need to cultivate emotional hygiene too. This involves coming to recognise our whole system of emotions, understanding of which, along with the workings of the mind, is something unique to ancient Indian knowledge. He stressed that although explanations of these things are to be found in spiritual treatises, the knowledge can be applied in an objective, secular way.

“I often say,” His Holiness continued, “that because an understanding of the mind and emotions is part of India’s ancient heritage, India has a special opportunity to combine it with modern education. I believe the time has come for Indian brothers and sisters to pay more attention to ways to tackle our emotions and achieve real peace of mind.

“Within Buddhism we have the Pali and Sanskrit traditions. The masters of Nalanda largely followed the Sanskrit tradition which emphasizes the use of reason over reliance on faith. The Buddha urged his disciples to examine what he had taught as a goldsmith tests gold. He told them to investigate and experiment, to adopt a scientific approach. This is what Nagarjuna, Aryadeva, Chandrakirti, Dignaga and Dharmakirti, who were practitioners as well as Nalanda scholars, did.

“Buddhist literature, as it was translated into Tibetan, primarily from Sanskrit, consists of 100 volumes of the Buddha’s words and more than 220 volumes of explanatory treatises by later masters. These are the books we study.

“In the 20th century Mahatma Gandhi revived ‘ahimsa’, non-violence, and showed how effective it could be in terms of political struggle. Archbishop Desmond Tutu, Nelson Mandela and Martin Luther King were all deeply moved by his example. Here and now in the 21st century, when too many problems revolve around emotions, I am convinced that India can show the world how to deal with them and achieve peace of mind.

“I’ve spent more than 60 years in India. When I first arrived as a refugee there was reason to be sad. China and India are the world’s most populous nations, but whereas China has faced all kinds of ups and downs, India has steadily preserved its democracy and rule of law. It’s a country where different peoples with their own language and culture all belong to one Indian Union.

“China is traditionally a Buddhist country and today there are said to be 400 million Chinese Buddhists. Therefore, there is common culture between China and India which could be the basis for their working together to achieve peace in the world. 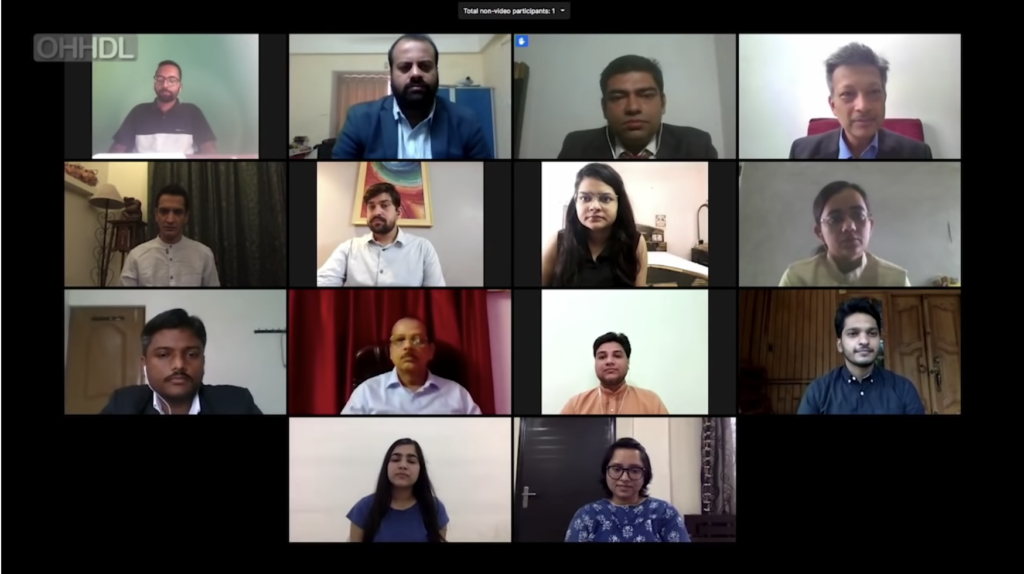 “I proudly tell people that I’m a son of India and once a journalist asked me why. I told him that my mind is full of Indian thought and my body has been nourished by years of Indian rice, dal and roti. In the face of difficulties, ancient Indian knowledge of the mind and emotions has helped me cope. Wherever I go and whenever I can, I tell people about non-violence and compassion.

“Today I’m the most long-standing guest of the Government of India. From when I first met President Rajendra Prasad and Pandit Nehru, the government and people of India have looked after the Tibetan community, including me. Now, in order to repay your kindness, I am determined to revive ancient Indian knowledge in a secular way suited to modern times. So far, the India public has responded positively. However, one person like me has only one pair of hands and I need as much help and support as I can get to follow this through.”

In response to His Holiness’s request for questions a young woman from the Delhi University Law Faculty asked him about spirituality. He told her that despite their philosophical differences the world’s major religious traditions all convey a common message about the importance of loving kindness, tolerance and forgiveness. He explained that it’s because of differences among human beings that we need different approaches to the development of loving kindness.

Another young woman, who is a Judge in Rajasthan, wanted to know how to see things objectively. His Holiness explained that things appear to exist objectively from their own side, but that that is only the appearance. It is not the reality. He quoted the quantum physics observation that nothing exists as it appears. He clarified that the basis of emotional responses like attachment and anger is thinking that things exist objectively. In reality, things are dependently arisen; they are interdependent. He asked her to consider the Buddha and to ask whether the Buddha is his body, his speech or his mind.

A professor at the Banaras Hindu University asked how to find equanimity. His Holiness replied that destructive emotions arise from ignorantly clinging to appearances. The antidote to this misconception is to understand that nothing exists as it appears. He mentioned Chandrakirti’s illustration of this in relation to a seven-fold analysis of a chariot. Chandrakirti states that a chariot cannot be said to be different from its parts; it is not identical with those parts, nor does it possess those parts; it is not in its parts, nor do its parts exist in it; it is not the mere collection, nor is it the shape. However, the chariot does exist by way of convention. 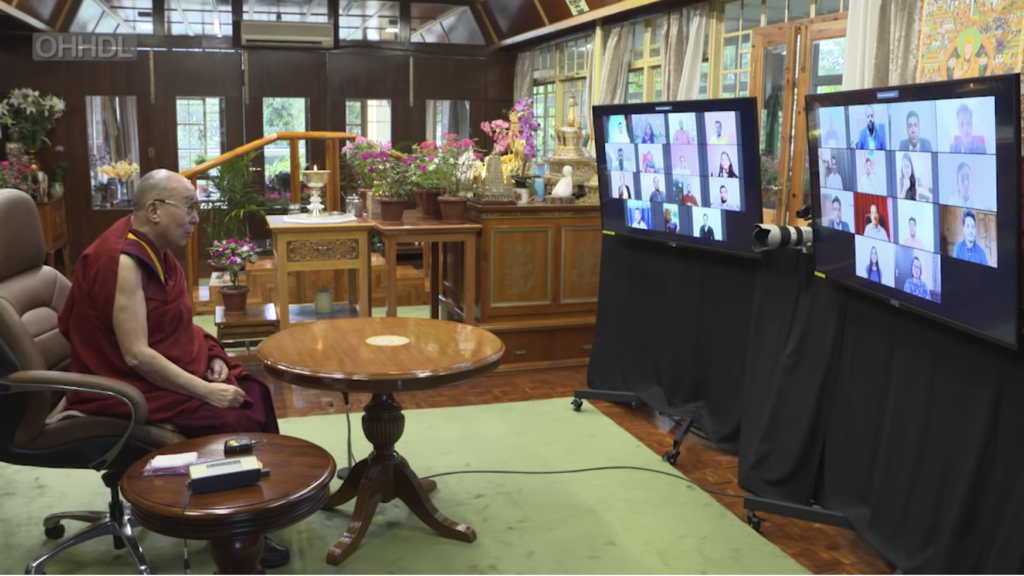 His Holiness went on to say that if things had objective existence in and of themselves, logical fallacies would ensue. These would include a noble being’s meditative absorption on emptiness being the destroyer of phenomena and the conventional existence of things being able to withstand ultimate analysis of the nature of things.

He recalled nuclear physicist Raja Ramanna telling him that while quantum physics had newly arisen in the west, corresponding modes of thought could be traced in ancient India. Nagarjuna also concurred that nothing exists as it appears.

“As soon as I wake up in the morning,” His Holiness declared, “I remind myself that nothing exists as it appears. Then I think about sentient beings who want happiness, but experience suffering. I generate compassion for them, determined to help them as much as I can to eliminate their negative emotions.”

The next question from the Vice Principal of Chapra Central School in Bihar concerned how to develop peace of mind. He also mentioned that the school had an association with Jayaprakash Narayan. His Holiness responded immediately, “JP was a great supporter of the Tibetan people and a good friend of mine; a wonderful man.”

In answer to the question he said, “The real destroyer of our peace of mind is not an external weapon or enemy, but our own destructive emotions. On the contrary, Shantideva points out that an enemy can be our best spiritual teacher. Neither our friends nor even the Buddha provide an opportunity to practice patience in the way that a hostile person does. And in so doing, an enemy can become a teacher.

“Negative emotions are rooted in short-sightedness, ignorance and our wrong views. Positive emotions, on the other hand, are based on reason. We can’t meditate on anger or fear, but, since it is supported by reason, we can strengthen our sense of compassion in meditation.”

“Modern education in this country was by and large introduced by the British,” His Holiness asserted. “That means it has material goals and there is little talk about our inner world. However, if modern education were combined with an understanding of the workings of the mind and emotions, of how to achieve peace of mind, it would be more complete.

“Students should learn not only about the physical world, but also about their emotional experience. From kindergarten to university, the curriculum should also include classes that teach about the mind and emotions in an objective and secular way. This country has a heritage of understanding the mind and our inner world, but this needs to be revived in the nation’s classrooms.

“Young children create few problems. They are naturally honest, open and appreciate affection. Some scientists say that human beings are social animals with a natural concern for their own community. We see this among children. When they are young, they are naturally kind. But once they go to school this changes. They develop materialistic goals. They begin to view others in terms of ‘us’ and ‘them’. Their basic human nature to be compassionate is neglected.

“If the education system fostered inner peace, compassion and non-violence, students would learn how to achieve peace of mind. This is what is required if we are to fulfil the goal of a genuinely peaceful and demilitarized world. Thank you.”