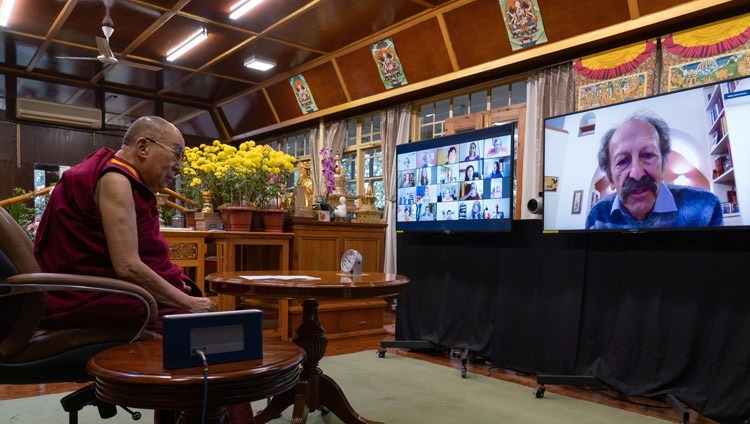 A member of the virtual audience asking a question during His Holiness the Dalai Lama’s discussion with members of the Einstein Forum from his residence in Dharamsala, HP, India on November 25, 2020. Photo by Ven Tenzin Jamphel/OHHDL

Thekchen Chöling, Dharamsala, HP, India – His Holiness the Dalai Lama was invited to take part in a discussion this morning with members of the Einstein Forum, a foundation in the state of Brandenburg, Germany, that serves as an open laboratory of the mind. It offers an annual fellowship to outstanding young thinkers who wish to pursue a project in a field different from that of their previous research. Fellows may live at Einstein’s summerhouse in Caputh with easy access to the universities and academic institutions of Potsdam and Berlin.

Prof Susan Neiman, Director of the Einstein Forum opened the conversation, telling His Holiness how honoured and excited she and her colleagues were to welcome him today. She regretted being unable to invite him to Einstein’s house, but read a quotation from Einstein that highlighted his appreciation of the potential for collaboration between Buddhism and science. She told him that the Einstein Forum was created 27 years ago to recreate and encourage the kind of conversation Einstein used to have about science and religion, politics and social justice. She thanked Shyam Wappuluri, an Einstein Forum fellow from India for organizing the event and Amber Carpenter, another fellow, for moderating the conversation.

“Today, we are not in direct contact,” His Holiness began, “but we are able to see and talk to each other over the internet. All religions convey a message of compassion and emphasise the importance of warm-heartedness, tolerance, contentment and self-discipline. Many religions believe in a creator God and the notion that as children of that God, all human beings are brothers and sisters. Then, there are also non-theistic traditions, mainly in India, that regard loving-kindness as the most precious of human qualities.

“Scientists observe that we human beings are social animals with a strong sense of concern for our community, because our very survival depends on the well-being of the community. Nurturing its welfare is one of the best ways of fulfilling our own interest.

“In this context, scientists are paying closer attention to what needs to be done to develop peace of mind. One aspect is coming to understand that it is internal obstacles, destructive emotions like anger, that disrupt our peace of mind. When anger arises, your inner peace is gone. However, the antidote to anger is compassion.

“India has for thousands of years preserved a tradition of non-violence, restraint from doing harm. And this is supported by ‘karuna’ or compassion and concern for others’ well-being.

“In Buddhist tradition we don’t rely on faith to cultivate compassion and peace of mind, we employ reason. We follow the Buddha’s advice not to accept his words at face value, but to examine and test them as a goldsmith tests gold. As a result, followers of the Buddha in India, and later in Tibet, valued taking a logical, investigative approach – and this accords with a scientific attitude.

“Because he taught people of varying mental disposition at different times and places, we have to examine what he taught and evaluate it. The great teachers at Nalanda University who came after Nagarjuna drew a distinction between those of the Buddha’s teachings that could be accepted as definitive and those that require interpretation. 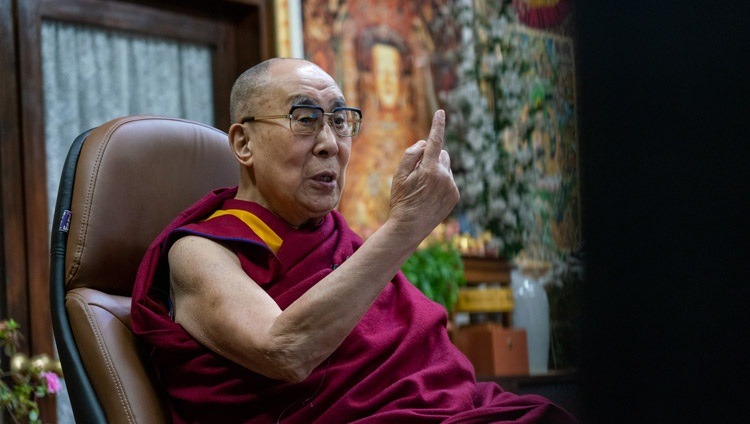 His Holiness the Dalai Lama responding to questions from the virtual audience during his discussion with members of the Einstein Forum by video link from his residence in Dharamsala, HP, India on November 25, 2020. Photo by Ven Tenzin Jamphel/OHHDL

“Since the 8th century, when the Tibetan king, Trisong Detsen, invited a top scholar at Nalanda University, Shantarakshita, to Tibet, we have also adopted a logical approach. In addition to his treatises, we translated and rigorously studied the works of the great Indian logicians Dignaga and Dharmakirti.

“This logical training is the basis on which I have been able to hold discussions with scientists for many years. There are points of convergence between ancient Buddhist thought and the discoveries of quantum physics on the one hand. On the other, scientists are beginning to register an interest in the workings of the mind and emotions.

“Today, on this planet, we face a lot of problems derived from anger, jealousy and fear. The weapons systems, including nuclear weapons, we have employed our intelligence to develop, are a threat to peace. However, more and more people support moves not only to eliminate nuclear weapons, but to achieve a complete global demilitarization. People value and appreciate the prospect of world peace, but nothing will come of it unless we as individuals develop peace of mind within ourselves. We all belong to human society and we have to learn to contribute to it and live together.”

In his responses to questions from the audience, His Holiness touched again on the importance of finding inner peace. He confirmed that training in ways to achieve peace of mind should be part of our education. He noted that just as everyone observes a code of physical hygiene, there should be a corresponding practice of emotional hygiene. This would include understanding that compassion actively counters anger and fear.

He mentioned a Tibetan monk he knew, who spent 18 years in Chinese prisons. When this monk reported being in danger during that time, His Holiness thought he was referring to threats to his life. However, the monk clarified that he had, at times, been in danger of losing his sense of compassion for his Chinese jailers. His Holiness cited this monk as someone with a remarkable degree of peace of mind.

Scientists have found evidence to suggest that it is basic human nature to be compassionate. We receive kindness from the moment we are born. Learning to maintain peace of mind is a key factor in our own ability to cultivate warm-heartedness.

His Holiness explained that the basic nature of the mind is pure and that purity is referred to as Buddha-nature. This is what underlies the idea that we can reduce and eliminate destructive emotions and purify the mind. He clarified that the quality of our action depends on our motivation, not so much on whether it is gentle or forceful. If the motivation is positive and compassionate, the action that follows will be beneficial.

When we are angry, the object of our anger seems to be absolutely negative. However, we can counter this by reflecting that nothing exists independently in the way it appears. Experience teaches that today’s enemy can become tomorrow’s friend. The label ‘enemy’ is our mental projection.

His Holiness observed that cultivating compassion and understanding the reality that nothing exists independently as it appears are crucial factors in reducing and overcoming our destructive emotions and therefore in achieving peace of mind. This approach is referred to in Buddhist terms as combining method and wisdom.

Understanding the workings of the mind and emotions has been part of discussions he has held with scientists over several decades. At the same time, facilities for the study of science have been established in the Tibetan monastic centres of learning re-established in South India.

“We’ve learned from science,” His Holiness remarked, “that accounts in Buddhist literature referring to a flat earth or to the sun and moon as being the same size and distance from the earth are mistaken. Among Buddhist scholars, Chandrakirti criticized masters who expressed such views and I count myself as his student.”

Asked how to view the functioning of karma in relation to science, His Holiness stated first that karma means action and action is subject to momentary change. However, physical, verbal and mental actions leave imprints on the mind that can remain for a very long time. He declared that the cumulative imprints of positive actions eventually ripen in the attainment of Buddhahood. 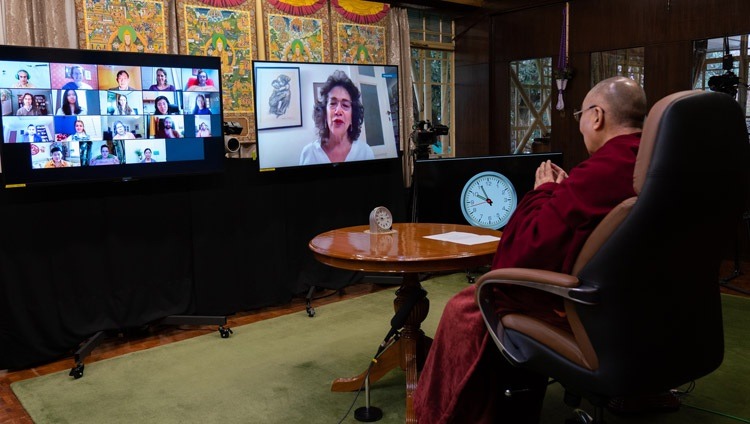 Prof Susan Neiman, Director of the Einstein Forum, opening the conversation with His Holiness the Dalai Lama at his residence in Dharamsala, HP, India on November 25, 2020. Photo by Ven Tenzin Jamphel/OHHDL

To apply a healing spirit to a divided society His Holiness recommended including training in ways to achieve peace of mind in general education. This would involve approaches to overcome anger and fear. He observed that competition can be beneficial when the aim is for everyone taking part to succeed, but when it involves winners and losers it is obstructive. He reiterated the importance of recognising the oneness of humanity and that we all have to live together motivated by a sense of brotherhood and sisterhood.

“The Indian master Shantideva commented that our enemy can be our best teacher. Being kind to your enemy is to show pure kindness, whereas showing kindness and affection to friends is generally mixed with attachment. Although the practice of compassion is described in religious texts, it should be adopted as something having universal value.

“Chapter six of Shantideva’s book ‘Bodhicharyavatara’ explains the negative effects of anger and how to overcome it. Chapter eight deals with the damaging effects of a self-centred attitude. Altruism is crucial to the achievement of happiness and these two chapters contain advice that is helpful whether you are a Buddhist or not.

“Since this book was explained to me, my way of thinking has changed. Today, I read it whenever I can. Combined with what Chandrakirti has to say about understanding reality it has been wonderfully effective in helping me transform my mind.”

His Holiness agreed that an ever-increasing human population is a risk because there limits to how much food the planet can produce. In addition, global warming poses a serious threat that may result before too long in the drastic dwindling of sources of water. He emphasised the need to assess these problems realistically from a wider perspective. He joked that an effective way to limit overpopulation would be for more people to become celibate monks or nuns.

His Holiness replied that it was an honour for him to interact with an institution connected with Albert Einstein, a man for whom he has great respect and admiration.