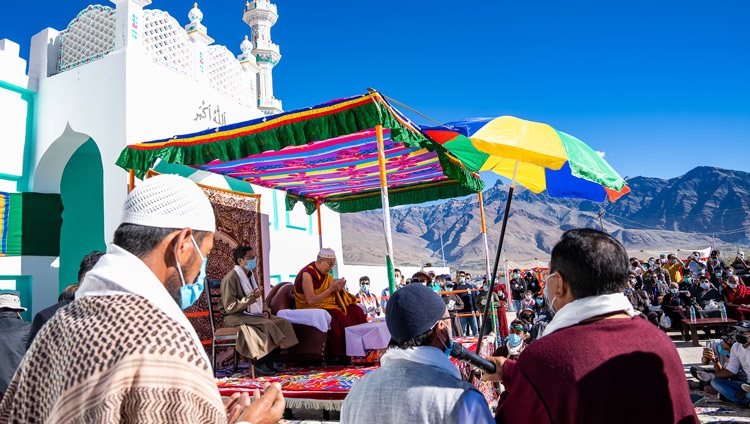 The local Imam offering a prayer at the start of His Holiness the Dalai Lama’s meeting with members of the Muslim community at the Eid Gah in Padum, Zanskar, Ladakh, UT, India on August 13, 2022. Photo by Tenzin Choejor

Padum, Zanskar, Ladakh, India, 13 August 2022: This morning His Holiness the Dalai Lama visited the Eid Gah at the invitation of the Padum Muslim community. He was made welcome by one of the leaders of the community, following which the local Imam offered a prayer. His Holiness in turn greeted the members of the congregation before him, adults and schoolchildren among them.

“As a Buddhist monk,” he told them, “wherever I go, I encourage people to cultivate inter-religious harmony. All religious traditions counsel their followers to develop love and compassion and work for the benefit of others. Therefore, whenever I can, I visit different places of worship, just as I have come to this Eid Gah this morning.

“While it is sad to see conflict breaking out between followers of different religious traditions, it’s even more saddening to witness quarrelling among members of different denominations of the same faith, as we see between Sunni and Shia Muslims in Afghanistan.

“Although our various religious traditions assert different philosophical points of view, their common purpose is to encourage their followers to be kind-hearted. 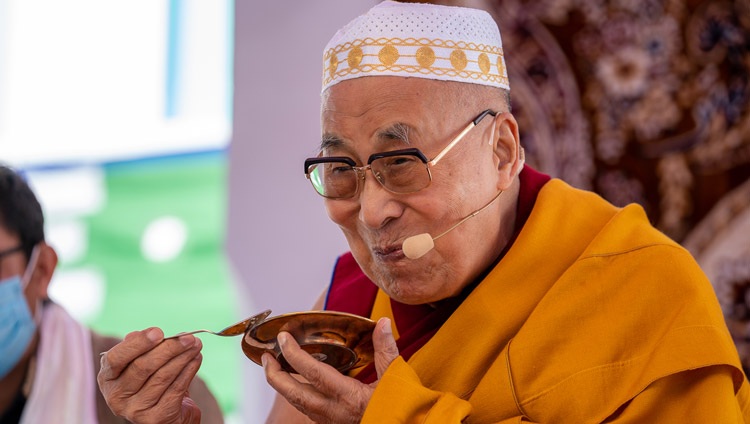 His Holiness the Dalai Lama enjoying a traditional treat during a tea break at his meeting with members of the Muslim community at the Eid Gah in Padum, Zanskar, Ladakh, UT, India on August 13, 2022. Photo by Tenzin Choejor

“Over the years, there has been steady material development throughout India, and I’ve noticed Zanskar has become more prosperous too. However, lasting happiness comes primarily from finding peace of mind and peace of mind does not fall from the sky. We need to make concerted efforts to be kind to each other, to live in harmony with each other and cultivate a deep sense of brotherhood and sisterhood throughout the community. We need to reflect on the oneness of humanity and how as children we only survived because of our mother’s love and affection.”

His Holiness recalled the good relations that existed between local Tibetans and the small Muslim community in Lhasa. They were invited to attend all the festivals observed by the Tibetan government as a mark of respect. Most were merchants who imported goods from India, but also brought Tibetans news and information from the outside world.

“I am pleased to see that here in Zanskar Muslim and Buddhist communities live in close harmony with each other, for which I would again like to thank our Muslim brothers and sisters today. Harmony in the Himalayan region as a whole is important because of the close relations the region has had with Tibet, where flourished a profound Buddhist culture derived from the historic Nalanda Tradition that we are striving to keep alive.

“I was born in north-eastern Tibet, where there was also a substantial Muslim community, so I have been familiar with Muslims since my childhood. Indeed, the local Muslim warlord, Ma Bufang, took a special interest in me and even before the Tibetan Government in Lhasa announced that I was the reincarnation of the 13th Dalai Lama, he made it known that that was his own judgement. 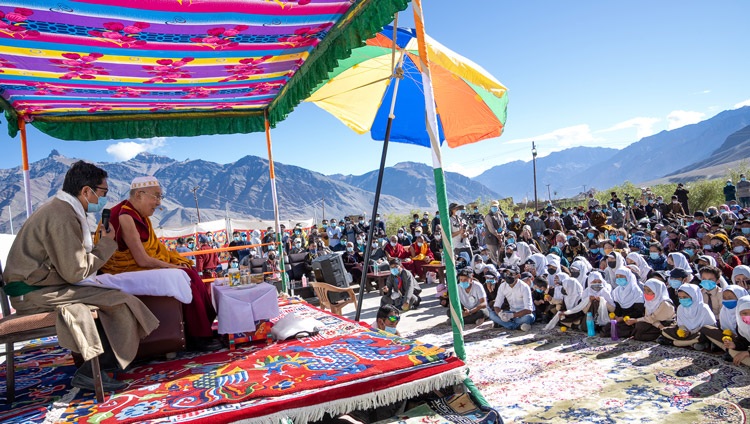 His Holiness the Dalai Lama addressing members of the Muslim community at the Eid Gah in Padum, Zanskar, Ladakh, UT, India on August 13, 2022. Photo by Tenzin Choejor

His Holiness went on to talk to a gathering of students and young people about Social, Emotional, Ethical Learning (SEE Learning), which involves educating the heart and the mind. This event attracted more than 4000 members of the general public.

“Time is always moving on; nothing can stop it,” His Holiness observed. “We can’t change the past, but we can shape the future. The more compassionate you are, the more you will find inner peace. However, education systems today tend not to adequately enhance basic human nature. Nevertheless, since human beings have a natural ability to think things through, education is a key factor in creating a better future.

“Whether you believe in religion or not is a private matter. However, we have a collective responsibility to create conditions that are conducive to peace in the world. Since conflict cannot be settled by force, our target should be a demilitarized world.

“It is our essential nature to be compassionate. From the moment we’re born our mother takes care of us. Without this care we would not survive. This experience is our first opportunity to learn that compassion is the root of all happiness. However, this natural appreciation of compassion seems to fade once we go to school. We need to be reminded that good health and a peaceful state of mind are founded on love and compassion. 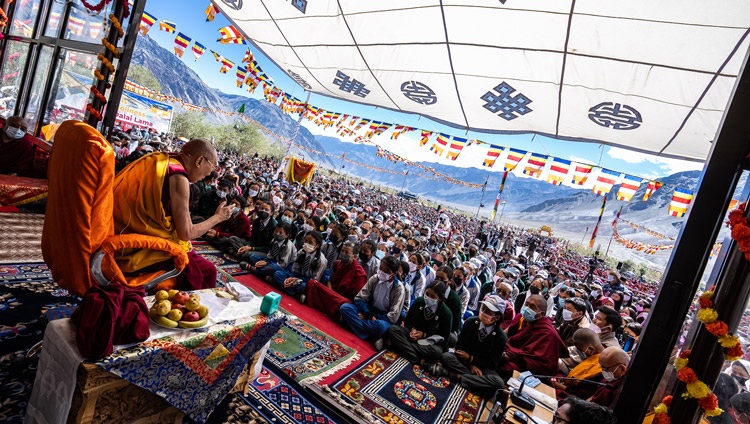 His Holiness the Dalai Lama speaking to over 4000 students and members of the local community at the teaching ground in Padum, Zanskar, Ladakh, UT, India on August 13, 2022. Photo by Tenzin Choejor

“Modern education would be more complete if it were to incorporate ancient Indian knowledge, including the long-standing principles of ‘karuna’ and ‘ahimsa’, from the standpoint of secular ethics.”

His Holiness explained that his own education began when he was a child and he received instructions in logic and reasoning, as well as in training the mind. He revealed that although which tradition you follow is a personal matter, he has received teachings belonging to all Tibet’s major Buddhist traditions. And the essential purpose of them all is to foster peaceful mind.

When a member of the audience asked a question about how practising birth control can contribute to limiting the world’s ever-increasing population, His Holiness replied that it is important to assess the circumstances act accordingly. 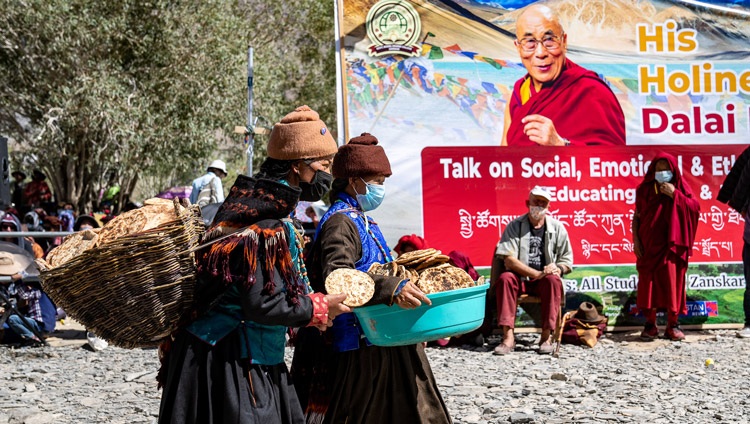 Women carry bread to distribute to the over 4000 students and members of the local community attending His Holiness the Dalai Lama’s talk at the teaching ground in Padum, Zanskar, Ladakh, UT, India on August 13, 2022. Photo by Tenzin Choejor

As the meeting came to an end, His Holiness advised the young people before him to study what Buddha taught as contained in the Three Baskets—Sutra, Abhidharma and Vinaya—and to engage in the practice of the Three Higher Trainings—ethics, concentration and wisdom.

Finally, he gave the oral transmission of the mantras of Manjushri and Arya Tara, commenting that reciting Manjushri’s mantra will help students to learn in the short term, while in the long term it will lead them to Buddhahood.

His Holiness told the gathering he was happy to have had the opportunity to talk to the young people, adding how important it is to cultivate bodhichitta and the wisdom understanding emptiness, which comprise the essence of the Buddha’s teachings. As he bade them goodbye, he also said, “See you next time.” 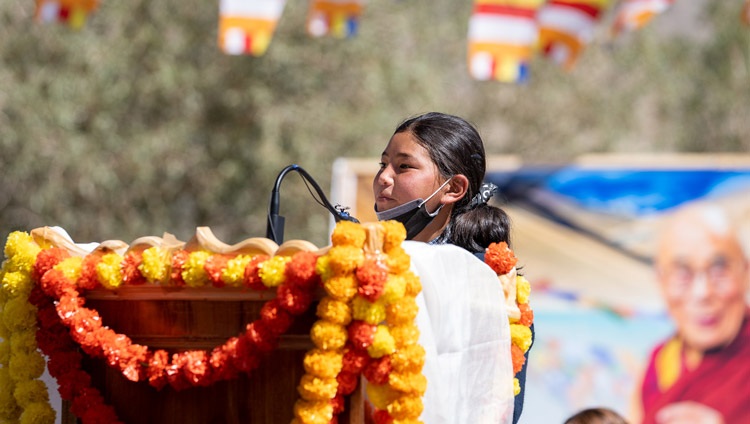 A young woman asking His Holiness the Dalai Lama a question during his talk to students at the teaching ground in Padum, Zanskar, Ladakh, UT, India on August 13, 2022. Photo by Tenzin Choejor