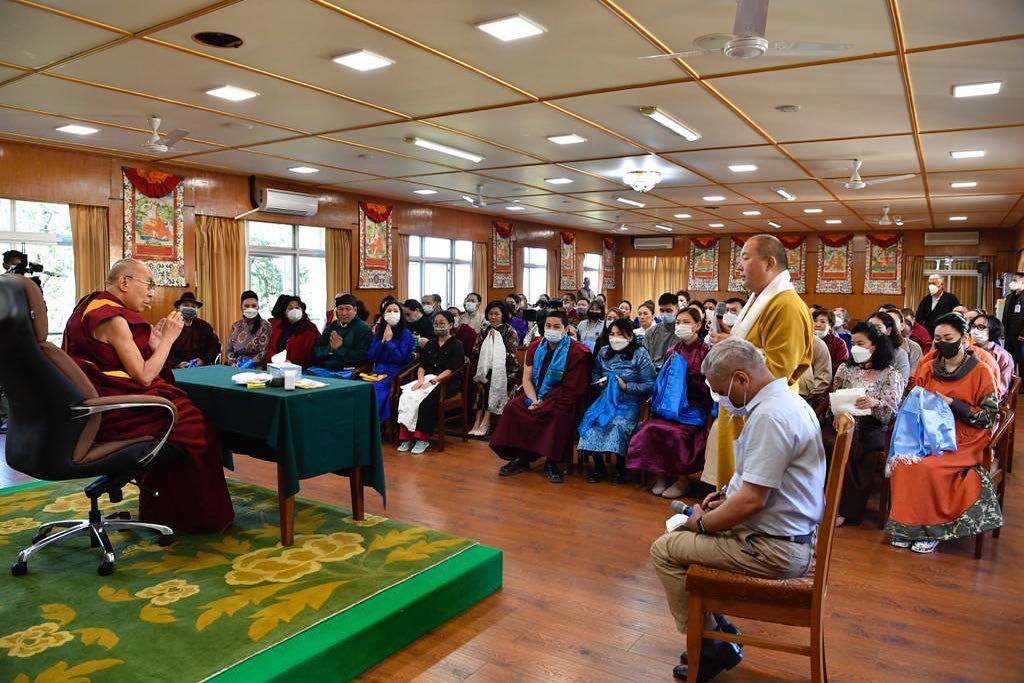 His Holiness the Dalai Lama during the audience with Mongolian devotees at Tsuglakhang on 25 March 2022. Photo/OHHDL

Dharamshala: His Holiness the Dalai Lama granted a special audience to a group of 52 devotees from Mongolia at his official residence in Mcleod Ganj, Dharamshala, on 25 March. The audience was organised by the Office of Tibet, Moscow, in collaboration with Naro Panchen Trust, and Telo Hutuktu Trust. The visit was led by Telo Tulku Rinpoche, Honorary Representative of His Holiness the Dalai Lama, at the Office of Tibet based in Moscow.

His Holiness explained that the deep bond between Tibet and Mongolia began with the visit of third Dalai Lama Sonam Gyatso to Mongolia. “Even the title ‘Dalai Lama’ is related to Mongolia. Historically speaking, Mongolians and Tibetans are brothers,” His Holiness remarked. His Holiness recalled that one of his main teachers other than the two official tutors was a Mongolian lama named Ngodup Tsognyi who taught Buddhist reasoning and textual traditions.

His Holiness said that despite being in exile, he enjoys a lot of freedom as a guest of the Indian government. His Holiness said that he has a lot of friends in Europe among them a lot of whom are scientists. “These scientists are experts on the subject of brain function, however, they are not familiar with the knowledge that is present in the ancient Indian wisdom especially the Buddhist texts. Therefore, we discuss a lot on these ancient knowledge on the workings of the mind. After discussing these knowledge, many of the scientists have described me as half-Buddhist monk, half-scientist,” His Holiness told the devotees.

The Mongolian devotees are in Dharamshala on a five-day visit. The group consists of Mongolians from different walks of life including public figures, authors, and former civil servants. With a focus on Buddhist psychology, introduction to Buddhist fundamentals, and Buddhist moral conduct, the program of the visiting Mongolian devotees include talks on the benefits of circumambulation, talks on how Buddhism flourished from India to Mongolia, discussion on basic Buddhist principles, six perfections, training your mind, etc. The program also included visits to Gyuto Monastery, Nechung Monastery, Library of Tibetan Works and Archives, Norbu Lingka, Tibet Museum, among others.