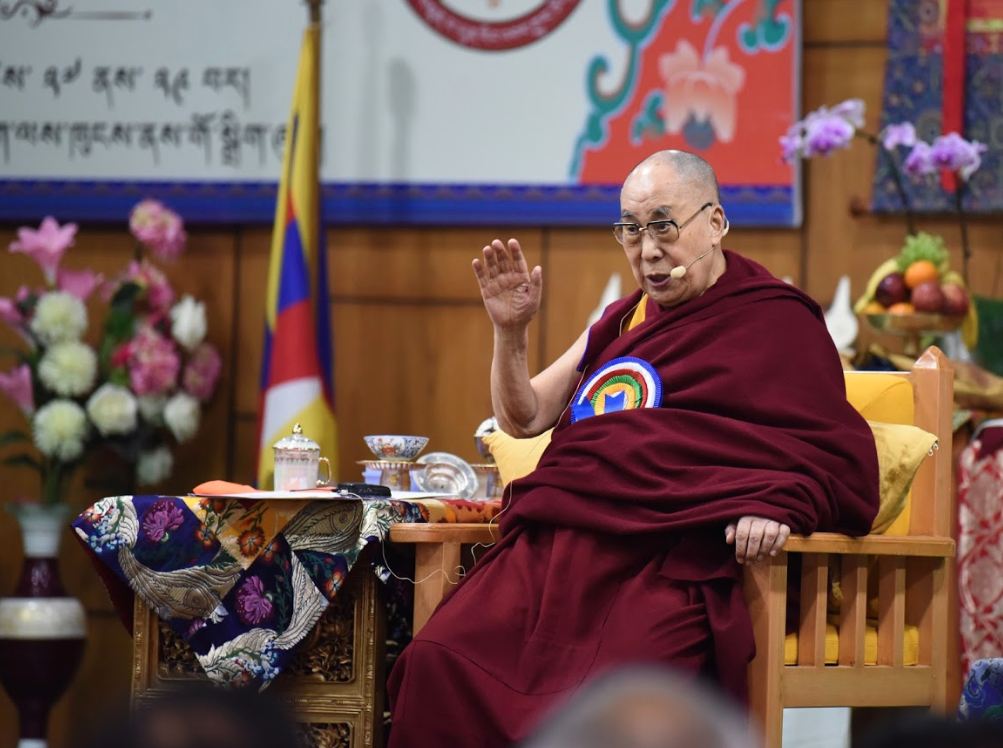 His Holiness the Dalai Lama addressing the valedictory session of the 14th Tibetan Religious Conference as the key-honoured guest at T-building auditorium, Central Tibetan Secretariat in Gangchen Kyishong, 29 November 2019.

Dharamshala: Led by the heads of the various traditions of Tibetan Buddhism and native Tibetan Bon tradition, the religious congregation of 115 reincarnate lamas, eminent Buddhist scholars and representatives of all major Tibetan Buddhist institutes in exile including 17 nun scholars and Buddhist masters from the Himalayan region—attending the 14th Tibetan Religious Conference—collectively in earnest prayers beseeched for the continuation of the Dalai Lama institution and pledged their unshakeable trust and devotion in His Holiness the Dalai Lama as the supreme authority over Tibetan Buddhism and the Tibetan people.

Obliging to the impassioned prayers and aspirations of his devout, karmic-bound followers, His Holiness today delivered benevolent words of reassurance that he is in “excellent health and completely joyful”, while also indicating that there is still time before the process of choosing a successor starts.

On hearing the news, the gathering of the Buddhist masters abounded with sentiments of gratitude, blissfulness, and hope. Outside the auditorium at CTA headquarters, Tibetans came in droves to bask in his blessings and celebrate this rare visit of their most revered spiritual leader, the heart and soul of the Tibetan people.

Speaking at the gathering of the 14th Tibetan Religious Conference, His Holiness the Dalai Lama said, “I extend my greetings and thanks to the heads of the various traditions of Tibetan Buddhism and native Tibetan Bon tradition who have come to participate in the 14th Tibetan Religious Conference. I thank everyone, the respective religious heads as well as their representatives.”

His Holiness then began by paying tribute to the ancient Indian tradition, particularly the Nalanda tradition, which he described as the source of the Buddhist tradition practised in Tibet since the 8th century.

“The Buddhist tradition followed in Tibet is according to the instructions first laid down by Nalanda master Shantarakshita who Trisong Detsen invited to Tibet in the 8th century. Due to the kindness of such great Indian masters and Tibetan dharma king Trisong Detsen—who despite having special links to China decided to seek Buddhism in India—the Tibetan people have inherited the unique tradition of Buddhism that follows the path of reason and not the authority of scriptures,” His Holiness said.

It was also in Trisong Detsen’s reign that Shantarakshita envisioned the translation of Indian Buddhist literature into Tibetan and established Samye, the first Tibetan Buddhist monastery in Tibet which included a Monastic section and a Translation section where translation of texts of Buddha’s teaching (Tib: Kagyur) and commentaries by Indian masters (Tib: Tengyur) was carried out.

His Holiness spoke about the 7th-century dharma king Songtsen Gampo who invented Tibetan script based on India’s Devanagari script by commissioning Tibetan scholars to devise Tibetan alphabet and grammar from Devanagari script which enabled translations of several important Buddhist texts from India into Tibetan.

“And later during the reign of Trisong Dhetsen, the Tibetan script and language was further enriched as a corpus of Buddhist literature and texts covering vast and profound knowledge of ancient Indian literature were translated into Tibetan.”

In between these reflections, His Holiness frequently remarked that he is eternally indebted to the ancient Nalanda masters and scholars for their contribution to Tibetan Buddhism.

“I would say that Tibetan people are truly blessed to have received and uphold such profound religious tradition which can be considered a pinnacle of culture,” His Holiness said. “In fact, Buddhism which came to Tibet from the Nalanda tradition should not be regarded simply as a religion, it has the potential to serve the academic field, as logic and psychology.”

Dismissing past notions of Tibetan Buddhism as being Lamaism, His Holiness noted the growing interest among Western scientists in engaging in deeper conversations with Tibetan Buddhist contemplative disciplines.

“These days, an increasing number of scientists and scholars are appreciating the emphasis the Tibetan tradition places on study, reason, and logic and have noted that the logical character of Tibetan Buddhism is comparable to science.”

On the other hand, His Holiness also noted that more and more people, especially in mainland China, are coming to realise that Tibetan Buddhism is a complete form of Buddhism.

“These growing interests are an affirmation that the Tibetan Buddhist tradition has the potential to contribute to humanity. Based on over 40 years of discussions with scientists and thorough study of the Buddhist treatises, I have come to identify three parts within the texts of Buddha’s teachings and commentaries which are Science, philosophy, and religion.”

While the Buddhism as religion will serve the spiritual practitioners, His Holiness said Buddhist science and philosophy, on the other hand, could make pathbreaking contributions to key fields of modern study and towards emotional wellbeing as well.

Hence in retrospect, His Holiness said the loss of Tibet’s independence and thereafter the six decades of Tibetan exilehood has been a blessing in disguise, an opportunity to re-invigorate Tibetan identity as the custodian of one of the pinnacles of cultural and religious tradition.

“This is the fruition of the farsighted vision and kindness of the great dharma kings, erudite scholars and masters of Tibet,” His Holiness said, imploring that in harnessing the potential teachings of this tradition, Tibetans are in a unique position to serve the humanity.

Commenting on the prevailing situation in Tibet, His Holiness said he greatly admires the courage and spirit of Tibetans inside Tibet that remains undaunted and undefeated even in the face of extreme brutality and violence.

His Holiness recited prayers from ‘’The Words of Truth’, an invocation of compassion towards all suffering sentient beings that He composed in 1960, and urged everyone to pray for the brothers and sisters who sacrificed their lives for the Tibetan cause.

“It is an act of courage and practice of non-violence. We must always remember them when we recite the Words of Truth.”

“The Tibetans inside Tibet are the source of our strength and inspiration. And likewise, we are theirs. Their indomitable spirit and the community efforts of Tibetans in exile have together contributed to the Tibetan exile success story,” He said.

His Holiness concluded by re-affirming the special karmic relation between the six million Tibetan people and Chenresig and assured that the Tibetan people, for eons and eons, will remain spiritually connected and guided by the Buddha of Compassion, Chenresig.

In the afternoon, the valedictory session was held which was attended by the Speaker Pema Jungney of the Tibetan Parliament-in-Exile and Kalon Karma Gelek Yuthok of Department of Religion and Culture.

Speaking to the gathering, Speaker Pema Jungney of the Tibetan Parliament in exile recapitulated few points based on the advice presented by His Holiness during the series of religious conferences held previously.

Further remarking on the resolutions of the 14th Religious Conference adopted unanimously by the religious heads and representatives, Speaker said that it was only right that the successor of His Holiness must be chosen by himself and not anyone else especially not to fulfill a political agenda.

Kalon of Religion and Culture, Ven Karma Gelek Yuthok pledged his department’s commitment to do their best in fulfilling the recommendations of the conference.

“Following the advice of His Holiness, we are committed to focusing more on collaborating in dialogue with science to share Buddhist philosophy and its study of logic which continues to be of relevance today,” Kalon concluded. 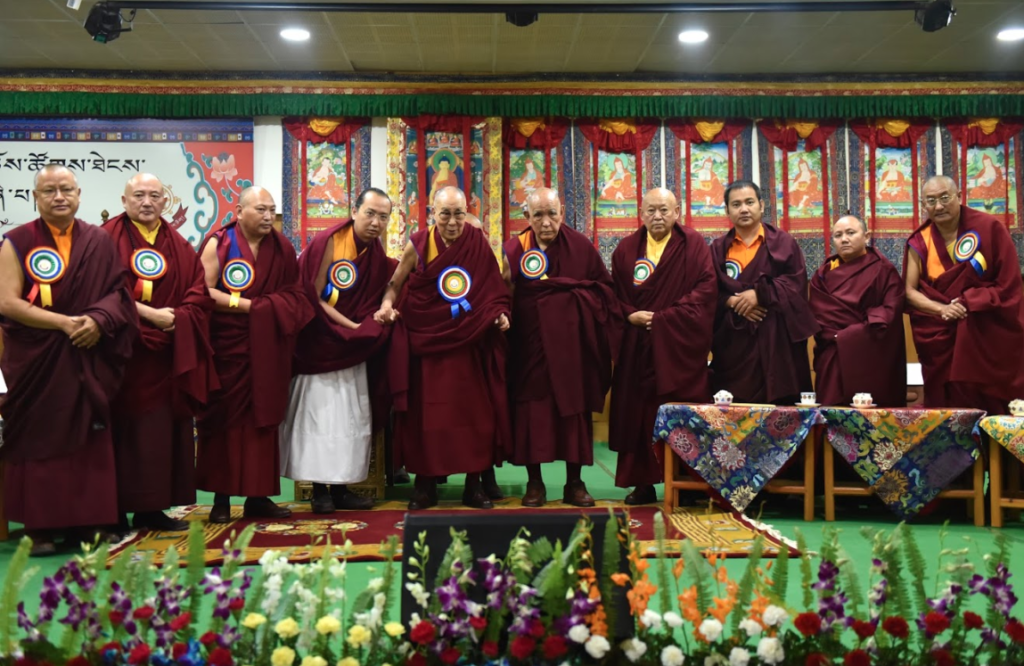 His Holiness the Dalai Lama with the heads of the major Tibetan religious traditions and Tibetan native Bon tradition at the 14th Tibetan Religious Conference in Dharamsala, HP, India on November 29, 2019. 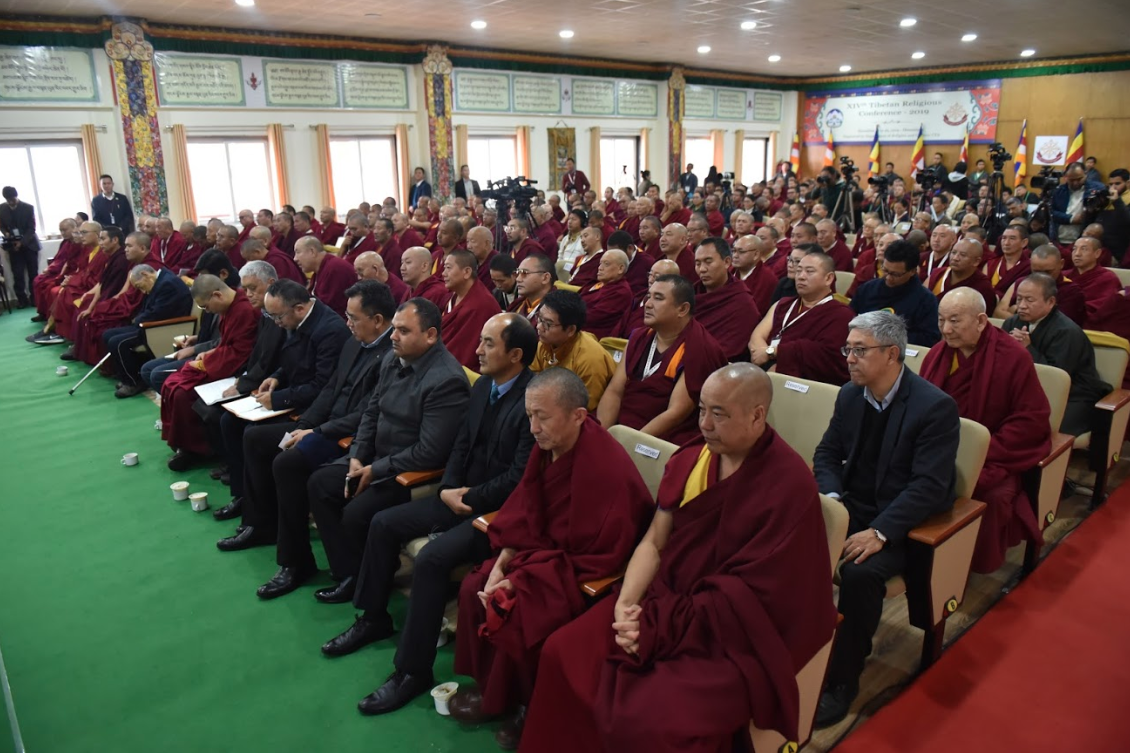 Gaden Phodrang Secretaries and religious heads and masters from all traditions of Tibetan Buddhism participating in the 14th Tibetan Religious Conference convened by the Department of Religion and Culture, CTA. 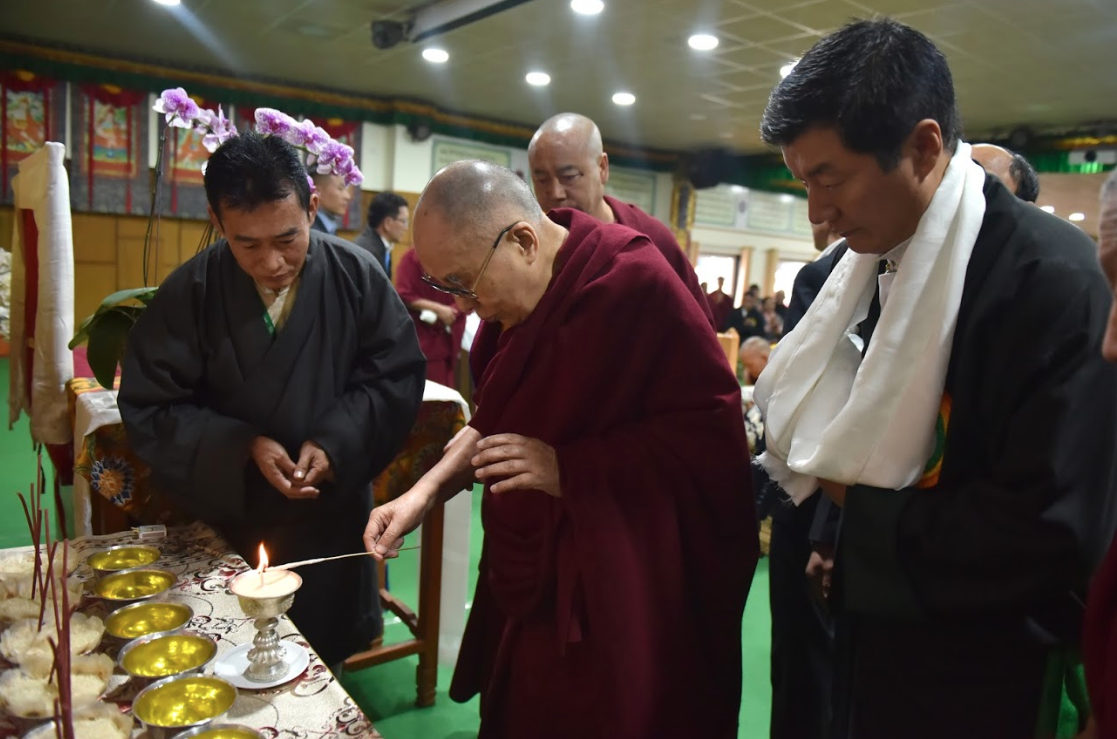 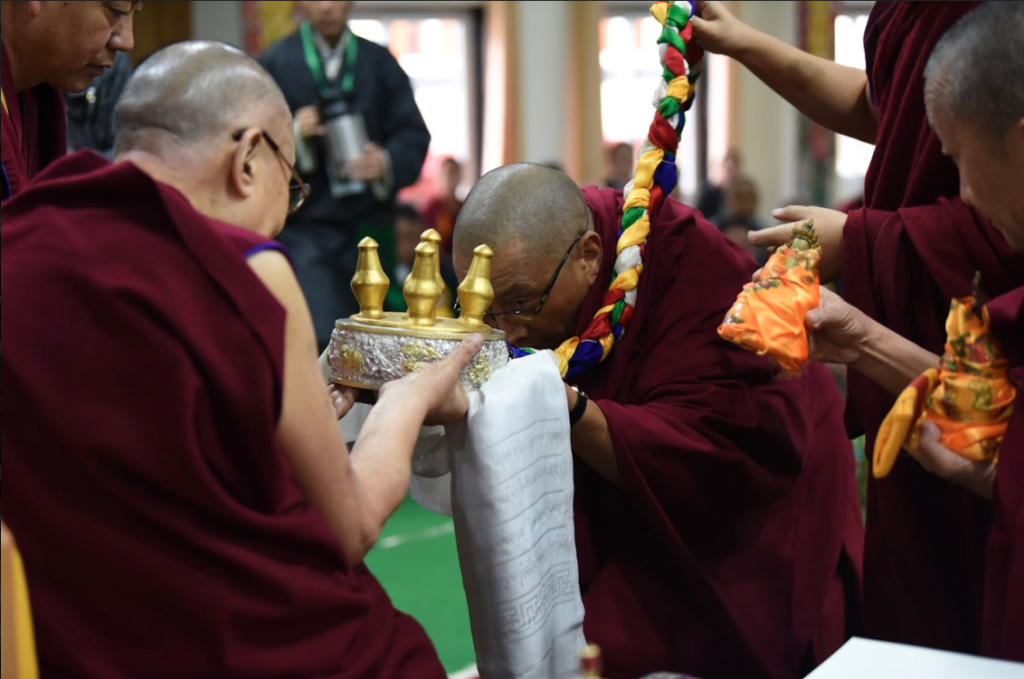 Kalon Ven Karma Gelek Yuthok, Department of Religion and Culture making a mandala offering to His Holiness the Dalai Lama at the valedictory session of the 14th Tibetan Religious Conference. 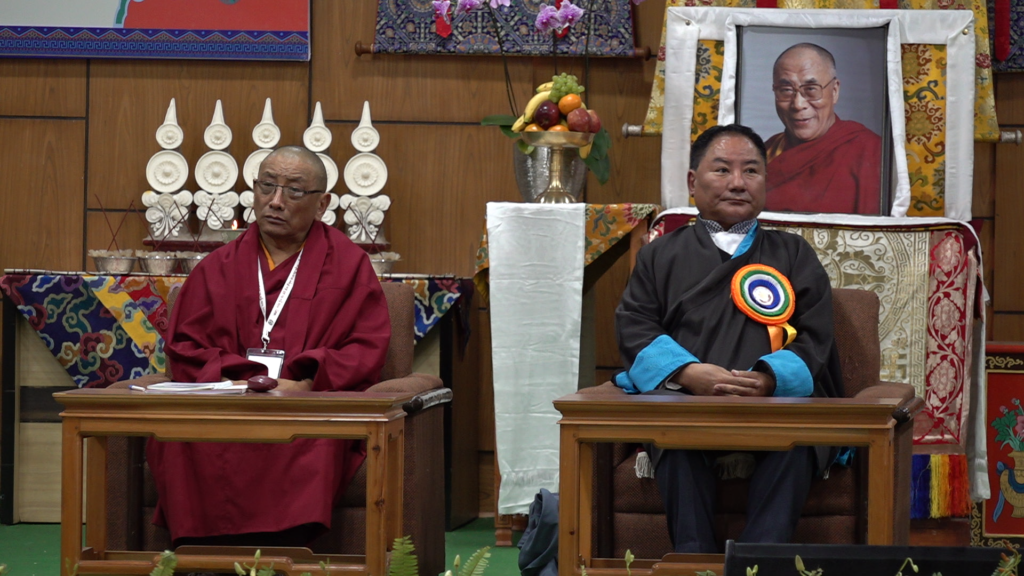 Kalon of Religion and Culture Ven Karma Gelek Yuthok and Speaker of the Tibetan Parliament in Exile during the concluding session of the 3-day religious conference.