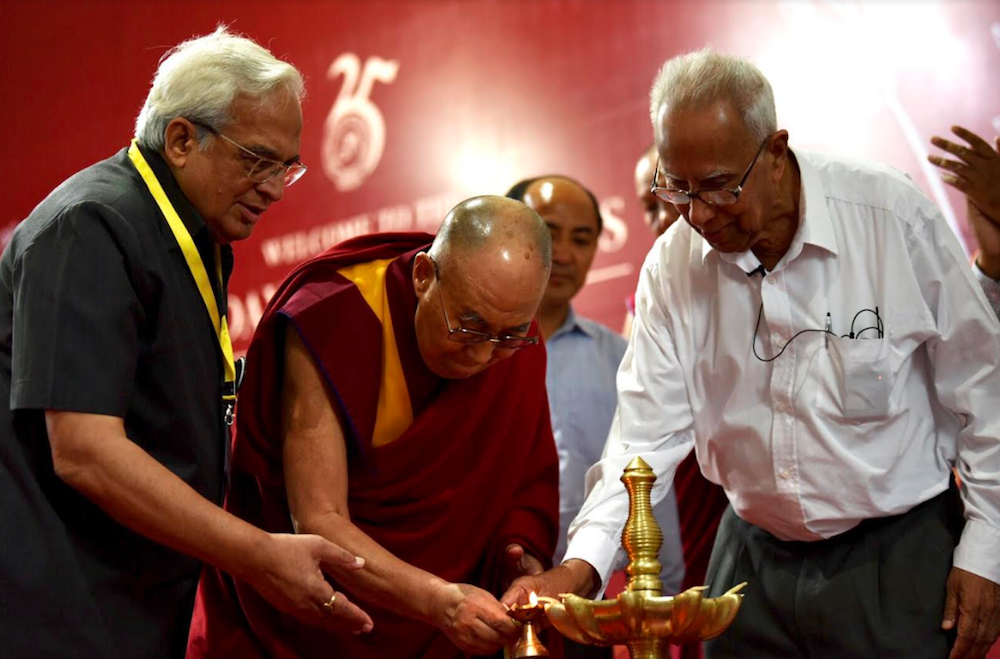 Goa: His Holiness the Dalai Lama delivered the keynote address on “Today’s Relevance of India’s Ancient Knowledge” at the Silver Jubilee celebrations of the Goa Institute of Management (GIM) today.

The event was attended by over 800 members, including students and staff of the GIM.

Highlighting the works of ancient Indian masters, he said ancient India was the only country that paid attention to mental hygeine, dating back to over 3000 years.

“All world major religious tradition teaches compassion, love and tolerance. Through the practice of Shamata, Vipassana one can achieve and develop the sixth mind, which is mental level consciousness,” he said.

His Holiness further explained how scientists have proved the basic human nature as more compassionate. Citing the example of his mother, His Holiness said, “My first teacher of compassion is my mother. No one can survive without mother’s love and affection.”

He commented that human affection and nurturing makes certain differences in life.

His Holiness said, “Tibetan learn from Indian guru and kept it alive for 1000 years. Where guru neglected those rich ancient Indian tradition. Fortunately in our refugee settlement set up a learning centre in Karnataka state with 1000 monks as teachers to revive this ancient Indian knowledge.”

His Holiness urged that they should have exchange program with monastics in refugee camp and the Universities.

Before ending his talk, His Holiness the Dalai Lama reiterated that we must work for the peaceful, compassionate century by solving the issue though dialogue rather than violence.

His Holiness reminded that in order to achieve external disarmament one should start disarming internally.

Padmashree Fr Romuald D’Souza, Founding Director of GIM  briefly talked about the GIM’s commitment to values  and ethics based on traditional and modern values. He thanked His Holiness for gracing the occasion of GIM’s silver jubilee celebration.

Dr Ajit Parulekar, Director of GIM appraised His Holiness of the partnership between Dalai Lama Centre for Ethics in Masschusettes Institute of Technology  with GIM and future plans to strengthen the partnership.

He even mentioned the upcoming launch of course in Ethics and Emotional learning in GIM.

Prof Ashoka Chandra, Chairman of Board of GIM explained about the aims and objective of the institution and how they are instilling morals in the curriculum.

His Holiness will leave for Bengaluru tomorrow. 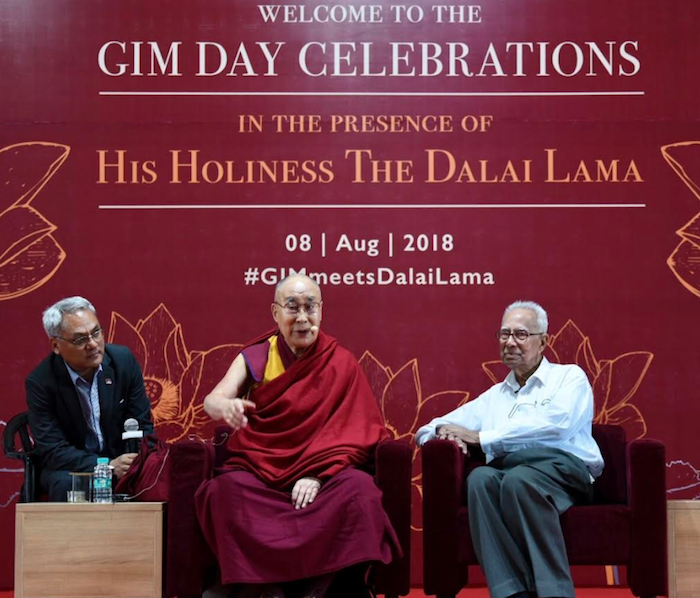 His Holiness delivering key notes on ‘Today’s relevance of ancient Indian knowledge’ to the gathering.Photo/Tenzin Phende/DIIR 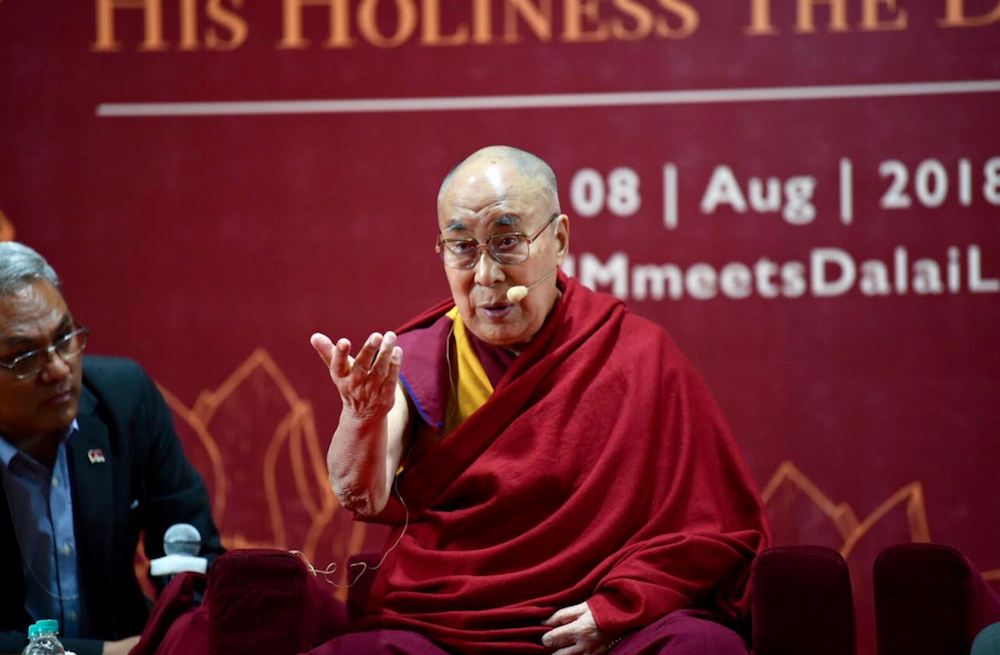 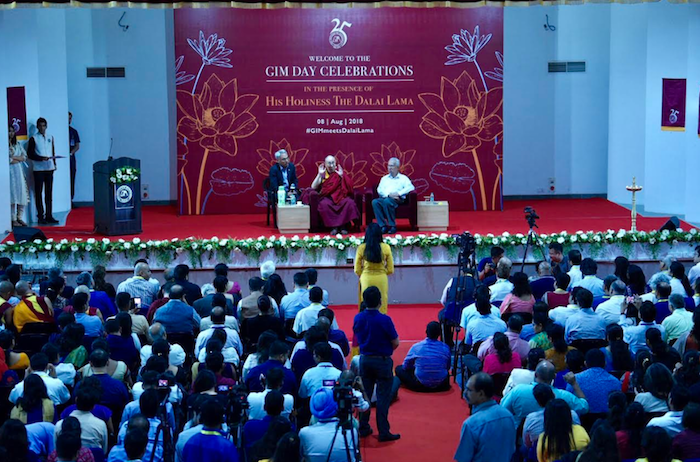 His Holiness The Dalai Lama addressing more than 800 members of GIM present at the event. Photo/Tenzin Phende/DIIR 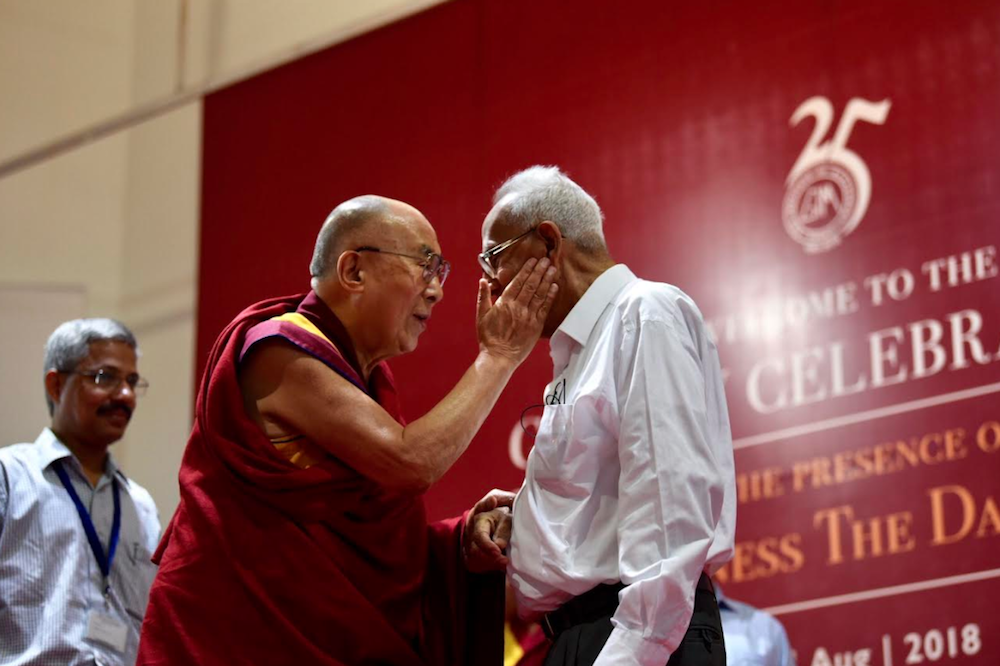