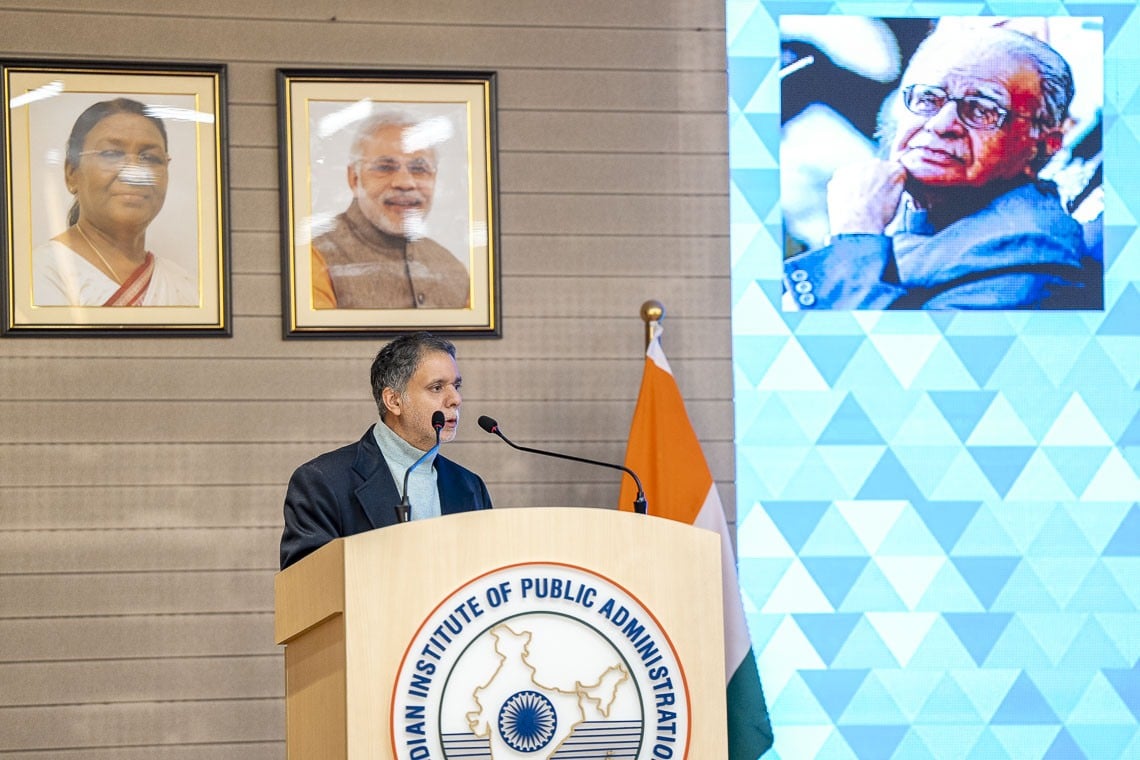 Atulindra Nath Chaturvedi welcoming His Holiness the Dalai Lama at the start of the program at the Institute of India Public Administration in New Delhi, India on January 21, 2023. Photo by Tenzin Choejor

New Delhi, India – His Holiness the Dalai Lama arrived in Delhi from Bodhgaya yesterday. This morning he drove to the Indian Institute of Public Administration (IIPA) where he had been invited to give the inaugural TN Chaturvedi Memorial Lecture. TN Chaturvedi was a distinguished member of the Indian Administrative Service (IAS). Following his retirement, he served as Comptroller and Auditor General of India and later as Governor of Karnataka. Members of the Chaturvedi family, Director General of the IIPA, SN Tripathi, Deputy Director of the Nehru Memorial Museum and Library RK Mishra and others received His Holiness on arrival and accompanied him to the TN Chaturvedi Memorial Hall.

His Holiness took part in the lighting of a lamp to open the occasion. He was felicitated by DG IIPA, SN Tripathi, welcomed by Atulindra Nath Chaturvedi and introduced to the audience by Aatil Nath Chaturvedi, who then invited him to address them.

“As I child in Tibet I learned about aspects of ancient Indian thought,” His Holiness observed. “Later I came to this country as a refugee, became a guest of the Government of India and have spent the majority of my life here. In that time, I’ve come to appreciate such qualities of ancient Indian thought as ‘karuna’ and ‘ahimsa’. Humanity needs these concepts in practice.

“Although I didn’t have the opportunity to meet Mahatma Gandhi, I was able to meet Pandit Nehru, Indira Gandhi and Lal Bahadur Shastri and as a result of talking to them developed sincere respect for them. India is a democratic country, a place where many religious traditions live together under secular principles—which is wonderful. 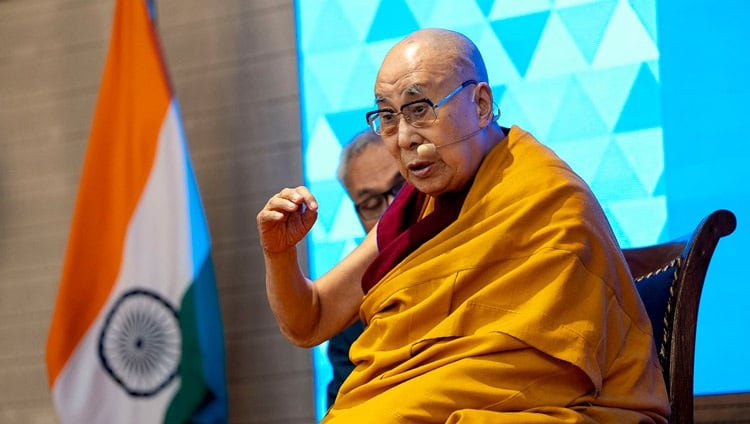 His Holiness the Dalai Lama delivering the Inaugural TN Chaturvedi Memorial Lecture at the Institute of India Public Administration in New Delhi, India on January 21, 2023. Photo by Tenzin Choejor

“My life now is dedicated to promoting ‘karuna’ and ‘ahimsa’, but I express my admiration for them just as an ordinary human being. We are all the same as human beings. We’re born the same way and we survive because of our mother’s compassion. As human beings it’s our nature to be compassionate. We’re social animals. We depend on our community to survive, therefore we in turn to support the community. By extension, all eight billion human beings alive today have to learn to live together.

“When we talk about ‘karuna’ and ‘ahimsa’ we’re not thinking of the differences between us, but rather ways in which we are the same. Where there is ‘karuna’ ‘ahimsa’ naturally comes about. When you have ‘karuna’ within, it gives you inner strength and self-confidence. And on that basis, you can see other human beings as your brothers and sisters.

“Dividing people into ‘us’ and ‘them’ is out of date. Instead, we should think of them in terms of ‘karuna’ and ‘ahimsa’. If we cultivate this precious thought of ‘karuna’, we’ll be free from fear, anger and hatred. We’ll sleep soundly and enjoy good physical health.

“My life has been difficult, but difficulties have brought opportunities to put these deeper inner values into practice. It’s foolish to think only in narrow terms, dwelling on our national, ideological or religious identity, because as human beings we are all the same and we have to live together.

“When I think of TN Chaturvedi, I remember that he lived his life in the spirit of ‘karuna’ and ‘ahimsa’. I’m now 87 years old, but I look younger than I am because I have peace of mind. Nevertheless, having an attractive external appearance isn’t nearly as important as revealing the inner beauty of ‘karuna’.”

In answering questions from the audience, His Holiness mentioned that modern education with its materialistic outlook has tended to come mainly from the West. He feels that if education today is to train people to be truly warm-hearted it needs to be combined with the inner values of ancient Indian thought. Material progress brings many benefits, but they should not come at the cost of inner peace and inner strength. 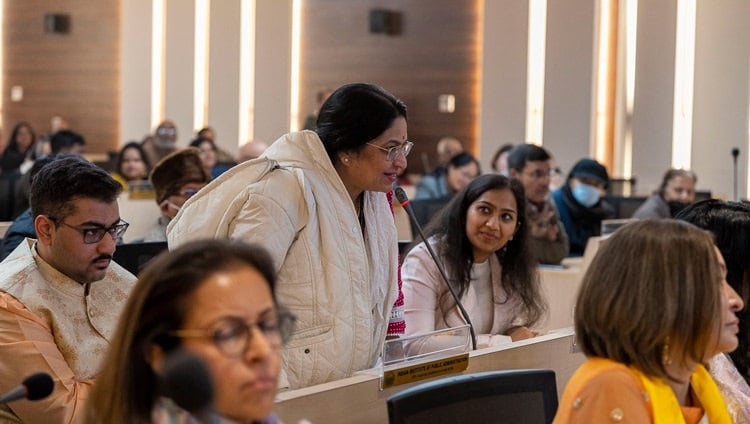 A member of the audience asking His Holiness the Dalai Lama a question during the program at the Institute of India Public Administration in New Delhi, India on January 21, 2023. Photo by Tenzin Choejor

His Holiness remarked that the time has come to think about the whole of humanity, not just this or that nation. In the 21st century, faced with the consequences of climate change, he said we cannot afford to think only in terms of individual nations; we have to learn to live together. The seriousness of global warming means we have to talk about what we can do about it and what we can do to preserve the world’s natural ecology.

When it comes to taking care of nature, His Holiness advised that we have to remind ourselves that we are part of nature and our lives depend on nature.

Challenged to say whether he ever gets angry, His Holiness declared that as someone who has studied Shantideva’s book ‘Entering into the Way of the Bodhisattva’ and for whom compassion is a core practice it rarely occurs.

He denied that ‘karuna’ is a source of weakness that leaves you open to being mocked and exploited by others. He reiterated that taking care of your community is the way to take care of yourself. He stated that one of the things he most appreciates about people from Tibet and the Himalayan region is their generally warm-hearted wish to help each other.

Asked how to make positive use of Artificial Intelligence His Holiness replied that no matter how sophisticated machines may be, they have a long way to go to emulate the human mind.

When invited to name someone he considers a role model today, His Holiness answered that a person he really admires is the great Indian master Nagarjuna. He lived long ago, but what he taught was how to think clearly. He was someone who took to heart the Buddha’s advice to his followers, “As the wise test gold by burning, cutting and rubbing it, so, bhikshus, should you accept my words—after testing them, and not merely out of respect for me.” His Holiness remarked, “I respect all religious traditions, but the unique feature of the Buddhadharma is that it encourages us to investigate.”

The moderator, Amitabh Ranjan, Registrar IIPA, thanked His Holiness for pointing out that ‘karuna’ brings inner strength and peace of mind. TN Chaturvedi’s second son Avanindra Nath Chaturvedi then presented a memento to His Holiness. Dr RK Mishra offered the word of thanks: “We have all been privileged to listen to what His Holiness has to say about ‘karuna’. Thank you all for coming.”