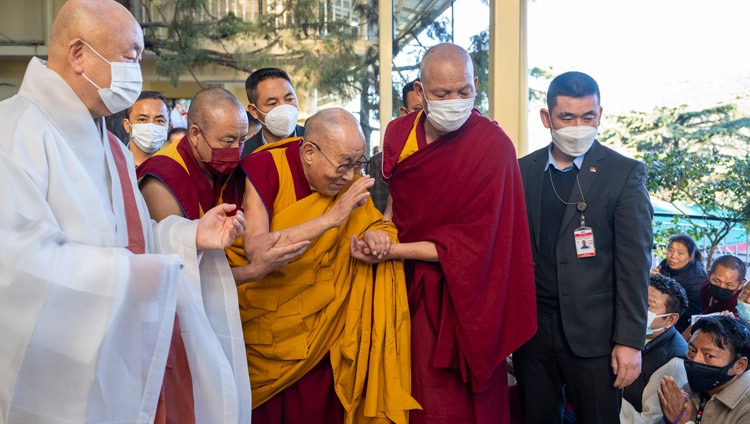 His Holiness the Dalai Lama, accompanied by the Korean Abbot Ven Jungwook Kim, greeting members of the crowd gathered to attend the first day of teachings at the Main Tibetan Temple in Dharamsala, HP, India on November 25, 2022. Photo by Tenzin Choejor

Dharamshala, HP, India: This morning an estimated 5000 people from 65 countries gathered at the Tsuglagkhang, the Main Tibetan Temple in Dharamshala, to listen to His Holiness the Dalai Lama. Among them was a group of 350 monks, nuns and lay-people from Korea who had requested him to teach Nagarjuna’s ‘Fundamental Wisdom of the Middle Way’.

As His Holiness walked through the temple yard, he was accompanied on his right by the Korean Abbot, Ven Jungwook Kim. As usual he smiled and waved to well-wishers in the crowd as he passed. From the balcony around the temple, he waved to people in the street below. Inside the temple he greeted the Ganden Tri Rinpoché and both Sharpa Chöjé and Jangtsé Chöjé, as well as the Abbots of several of the great monasteries re-established in South India.

The Korean contingent led by monks and nuns in their light grey robes briskly chanted the ‘Heart Sutra’.

“Today my Korean Dharma friends are here,” His Holiness began. “Korea is a traditionally Buddhist country and I’ve been impressed by the dedicated interest in Buddhism of many Koreans I’ve met. I’m happy to see you all here.

“Of course, everyone should feel free to follow whatever religion they wish. Our different religious traditions have different philosophical points of view, but all convey a common message to do no harm and to help others as best we can. I’m a monk and a religious person and I have many friends among our diverse religious traditions. Since all these traditions are worthy of respect, I take whatever opportunity I can to visit other people’s places of worship.

“The Venerable Abbot Jungwook Kim has organized these teachings for which I thank him. We’ve been friends for many years in the course of which there have been several opportunities to give and receive Dharma discourses.”

His Holiness cited a verse from ‘The Segment Dealing with the Mantra of the First Supreme Glorious One’ (Heruka) [Sriparamadinamamahayanakalparaja] to which there are many references in the Collection of Treatises, the Tengyur.

[Cyclic] existence is pure by nature,
By its very nature it is non-existent.
If you have a mind that’s pure in nature,
You’ll obtain the supreme existence [of Buddhahood].

He explained that the three planes of existence do not exist essentially by their own nature although they appear to us as if they have an essential core in and of themselves. Because we cling to such a perception, we develop attachment, anger and so forth. So, he said, it’s important for us to remember that things do not have any intrinsic, essential core. When you understand this emptiness of any essential nature of things with regard to the three realms of existence, it reduces your clinging to a sense that things and experiences are solid and so limits attachment and aversion to them.

With a pure mind that understands this lack of intrinsic existence you will avert your clinging to cyclic existence. And by understanding the nature of things you will have compassion for all sentient beings, wishing them not to be under the sway of delusion. So, the view of emptiness helps reduce clinging to the solidity and objective existence of things.

All sentient beings are the same in wanting happiness and joy, while seeking to avoid suffering. By cultivating compassion for sentient beings wandering in cyclic existence, along with an understanding of emptiness, you’ll experience method and wisdom. You will embark on and ascend the five paths of accumulation, preparation, seeing, meditation and no-more-learning. In this way you’ll make your life fruitful and ultimately reach enlightenment.

“I felt very sad about the recent tragedy in Korea,” His Holiness declared, “the stampede in which so many died. Let’s pray for the deceased as well as the injured.

“My practice is twofold—cultivating the awakening mind of bodhichitta and insight into emptiness. Emptiness reduces anger; bodhichitta reduces self-cherishing. If your sense of self-cherishing is less, you’ll have more space in your mind for others. You’ll be at ease and full of joy. Peace of mind brings inner strength. Therefore, bodhichitta is a source of happiness for self and others. When you help others, you fulfil your own goals too.

“We are human beings who have met the Buddhadharma. If we listen, reflect and meditate on the teaching, it will help in life after life. We’ll readily serve others. Shantideva’s ‘Entering into the Way of a Bodhisattva encourages us:

As long as space endures,
And as long as sentient beings remain,
Until then, may I too remain
To help dispel the misery of the world.

“This is the way to make life meaningful.

“All eight billion people alive today are the same in wanting happiness and not seeking suffering. But although we are the same in this way, our unruly minds create friction between us. What disturbs our peace of mind is attachment and greed, anger and hatred. There’s much talk about peace in the world, but it has to be rooted in peace within ourselves. From this point of view, we can see that relying on weapons and the use of force is useless. I pray every day for peace in the world and hope that in the future there will be greater peace on the Korean Peninsula.

“As far as global heating is concerned, it’s very serious. As the world becomes hotter and hotter it seems it will eventually be consumed by fire. In the meantime, we must cooperate with and serve others.

“My Dharma brothers and sisters, I’d like to ask you to cultivate a good heart and remember that things lack any inherent existence and, in these ways, dedicate yourselves to the benefit of others.

“With regard to understanding emptiness, we have the works of the Nalanda masters who followed Nagarjuna, who in his turn had written about both the profound and extensive paths. Many of the Nalanda masters followed his treatises, the ‘Fundamental Wisdom of the Middle Way’ and the ‘Precious Garland’, and they also employed reason and logic. Nagarjuna was like a second Buddha.

“I find it valuable to keep the classic texts by these masters, including Chandrakirti’s ‘Entering into the Middle Way’ and its auto-commentary, close to hand so they’re easy to read. That’s far more useful than paying them respect from a distance.

“These days many people are taking a new-found interest in the teaching of the Buddha. Scientists are intrigued both by the psychology he taught, as well as the philosophical idea of ‘dependent arising’. We too should pay attention to the teaching, and then reflect and meditate on it.

“That’s all I have to say today, we’ll continue the teaching tomorrow.”