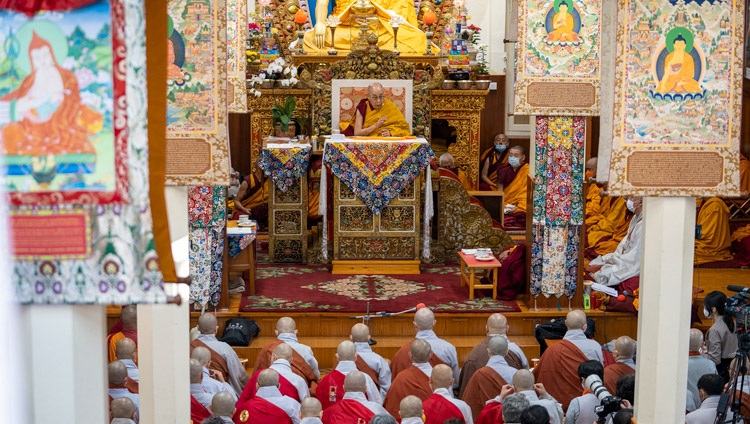 His Holiness the Dalai Lama addressing the Korean monks, nuns and lay-people sitting inside the Main Tibetan Temple on the second day of teachings in Dharamsala, HP, India on November 26, 2022. Photo by Tenzin Choejor

Dharamshala, HP, India: As soon as he had taken his seat this morning, His Holiness the Dalai Lama addressed the Korean monks, nuns and lay-people who filled the temple before him.

“My dear Korean brothers and sisters, despite war and political tensions, you have maintained your faith in the practice of the Dharma. North Korea relies on the use of weapons. It is a serious threat, but we all have a responsibility to work to bring peace to the Korean Peninsula. Please do your best to resolve the conflict between you and the North.

“Buddhism adopts a broad view that takes all sentient beings into account and on that basis we can establish peace in the world. It needs to be rooted in peace of mind. The Buddha taught about the workings of the mind in great detail. He explained that it is the eruption of emotions like anger, greed, jealousy and so forth that disturbs our minds. A simple way to counter such afflictions is to cultivate a good heart.

“This morning I’ll give an introduction to the Buddhadharma and we can meditate together—analytical meditation followed by concentration. First, it’s good to sit in the seven-point posture of Vairochana with legs crossed; hands in the gesture of mediation, palms up, right over left; back straight; shoulders resting evenly; head slightly bent forward; tongue touching the upper palate and eyes slightly opened.

“All our religious traditions have good qualities and I respect them all, but Buddhism and other ancient Indian traditions make meditation a significant part of practice. Meditation allows us to maintain a relaxed state of mind.

“First, our state of mind is neutral, then we cultivate positive states of mind such as the awakening mind of bodhichitta and insight into emptiness. Other Indian traditions posited the existence of an independent self. The Buddha denied that there was such a self separate from the body and mind. We have to ask, ‘Where is this self or ‘I’?’ When we answer the question, ‘Whose body and mind are they?’ with the word. ‘Mine’, we have to ask ourselves, ‘Where is the self or ‘I’ that owns them?’ But we can’t find it in the brain or any other part of the body. Meditate on that.

“Even in dreams we have a sense of ‘I’, but we can’t find or identify that self. All traditions of Buddhism assert selflessness, but this is not to say that the ‘I’ does not exist because on a practical, conventional level we talk about my hands, my head and so forth. I appear to be a solid entity and yet there is nothing that can be pointed out and identified as my ‘self’.

“Selflessness can be defined in different levels of subtlety. The Buddha first taught a coarse selflessness and explained subtler degrees of selflessness later. Eventually he revealed the mind of clear light that is the basis of tantric practice.

“The ‘I’ or self is designated on the basis of the combination of body and mind, just as the body is designated on its parts. Some schools of thought assert that mental consciousness can be pinpointed as the ‘self’ or person. However, apart from his body and mind there is nothing that can be identified even as the Buddha.

“The Sangha can’t be pinpointed either. Does that mean it doesn’t exist? no, but it exists by way of designation, in terms of labelling. There is something labelled the Sangha, but nothing that exists beyond that. From the Buddha to the smallest insect, there is a conventional sense of ‘I’, but it cannot be found under analysis. Meditate on that.”

His Holiness mentioned three verses from chapter six of Chandrakirti’s ‘Entering into the Middle Way’, which he reflects on daily. [A summary of the discussion is taken here from ‘Illuminating the Intent’].

If the intrinsic characteristics of things were to arise dependently,
things would come to be destroyed by denying it;
emptiness would then be a cause for the destruction of things.
But this is illogical, so no real entities exist. 6.34

If the inherent characteristic of a thing such as form or feelings were to arise in dependence upon causes and conditions, through its own essence, this would imply that a yogi directly perceiving the emptiness of inherent existence of all phenomena would realize emptiness by denying such a nature of things. Meditative equipoise does not actually perceive form and so on, but if they were to exist through their inherent characteristics, then meditative equipoise would necessarily perceive them. It does not.

And if this were so, these things would then become non-existent. If they were to become non-existent, it would then be the case that what was existent prior to the meditative equipoise would subsequently come to be destroyed or ceased. The meditative equipoise would become the cause for their destruction. So just as hammers and the like are causes for the destruction of vases and the like, seeing emptiness too would then be a cause for the destruction of the nature of things, thus denigrating them. But this is illogical, so no real entities exist—that is, say, by virtue of their inherent characteristics-and we must never uphold such a notion of inherent arising.

Thus, when such phenomena are analysed,
nothing is found as their nature apart from suchness.
So, the conventional truth of the everyday world
should not be subjected to thorough analysis. 6.35

When such phenomena as form, feelings, and so on are analysed thoroughly, in terms such as “Does it arise from itself or does it arise from other?” beyond the fact that they do not arise or cease on the ultimate level—that is, apart from suchness as their nature—nothing else is found, no other or extra dimension such as arising and so on. So, the conventional truth of the everyday world should not be subjected to thorough analysis in terms such as “from itself, from other,” and so on. We should just accept the facts of worldly perception, captured in statements such as “If this exists, that follows.” We should do this on the basis of participating in the conventions that are dependent on others—those of the world.

In the context of suchness, certain reasoning disallows arising
from self or from something other, and that same reasoning
disallows them on the conventional level too.
So, by what means then is your arising established? 6.36

In the context of an analysis into suchness or the ultimate truth, certain reasoning presented above disallows the arising of phenomena such as form from self or from something other. Likewise, on the conventional level too, that same reasoning disallows them-the arising of form and so on through inherent characteristics. So, by what means of valid cognition then is your inherent arising established? It is not.

“All eight billion human beings alive today are the same in wanting to be happy,” His Holiness declared, “and we are among them. People don’t want suffering, but they run after its causes, bringing ruin to themselves and others. Think about how you are but one individual while others are countless. Determine to bring them joy with the thought—may they not have suffering; may they find happiness.”

His Holiness answered several questions from the audience. He suggested that in the case of social workers dedicated to the service of others, it’s cultivating a warm heart that makes a differences and wards off fatigue. When people who purport to be spiritual practitioners behave in ways inconsistent with their aspiration, it’s because they have become confused about the difference between moral and immoral conduct. He clarified that consciousness is not made by the Buddha, nor is it a product of karma. It has the nature of clarity and awareness.

Taking up Nagarjuna’s ‘Fundamental Wisdom of the Middle Way’ His Holiness remarked that Nagarjuna is renowned as the second Buddha. He is also referred to as the pioneer of the profound wisdom lineage. His Holiness revealed that he received an explanation of the text from the former Ganden Tri Rinpoché, Rizong Rinpoché who was at the time engaged in a Vajrabhairava retreat and gave this teaching in between sessions. His Holiness read through the first thirteen chapters.

Next, he mentioned the two traditions of practice for cultivating bodhichitta, the method known as the Seven Point Cause and Effect and the method described in Shantideva’s ‘Entering into the Way of the Bodhisattva’ and known as Equalizing and Exchanging Self and Others. Of the two, His Holiness feels the latter is more effective. He reiterated that he cultivates bodhichitta and the view of emptiness every day and encouraged his listeners to make these two principles the basis of their practice.

His Holiness then described what to visualize and led the congregation through the verse for generating bodhichitta. He encouraged them to be determined in their practice and support it by engaging in the six perfections.

He brought the teachings to an end by encouraging those in the crowd not to become demoralized, but to combine bodhichitta with an understanding of emptiness so the attainment of Buddhahood would become not just an aspiration but a practical possibility.