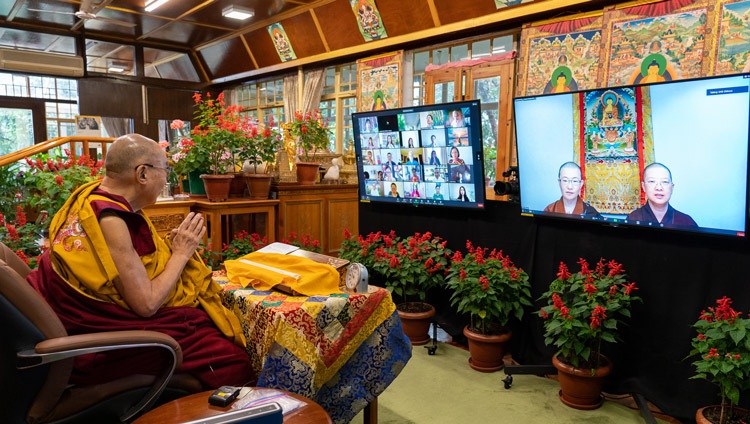 Nuns at Pao Kwan Foh Tang, Singapore, chanting the ‘Heart Sutra’ in Chinese at the start of the second day of His Holiness the Dalai Lama’s teachings online from his residence in Dharamsala, HP, India on September 9, 2021. Photo by Ven Tenzin Jamphel

His Holiness the Dalai Lama smiled broadly as he entered the room this morning and saw faces of Asian Buddhists on the screens before him. He waved to them before sitting down. Nuns at Pao Kwan Foh Tang, Singapore, chanted the ‘Heart Sutra’ in Chinese. They were followed by a group in Dharmayatra, Indonesia who recited it again in Indonesian.

His Holiness began by quietly repeating a verse of homage.

Beyond words, beyond thought, beyond description, Prajñaparamita
Unborn, unceasing, the very essence of space
Yet it can be experienced as the wisdom of our own awareness:
Homage to the mother of the buddhas of past, present and future!

“Today,” he continued, “we’re on the second day of teachings requested by Asian Buddhists. We might ask what is the purpose of the Dharma and teachings of the Perfection of Wisdom. An answer may be found in the prayer that Chinese recite at the end of the ‘Heart Sutra’, which encapsulates the practice of the Dharma:

“Ultimately, the reason for dispelling the three poisons, attachment, anger and ignorance, for cultivating wisdom and overcoming obstacles is to engage in the deeds of Bodhisattvas, not for selfish reasons but in order to help all beings attain enlightenment. I find this comprehensive prayer very moving. The ‘Heart Sutra’ to which it is appended represents the essence of the Buddha’s teachings.

“We suffer because our minds are unruly. The Twelve Links of Dependent Arising describe the process. And the first link is ignorance. The Buddha’s teachings are based on reason and logic. He taught that pain and pleasure are not brought about by a creator god, nor are they without causes and conditions. India maintains an age-old tradition of ‘ahimsa’, doing no harm, the opposite of which is belligerence and aggression. These destructive emotions arise because of ignorance and ignorance is attributed to our unruly minds.

“The more we use our intelligence, the more we’ll avoid negative causes of pain and engage in the causes of happiness. Ignorance is not dispelled by prayer. We can’t just wish it away. To eliminate ignorance, seeing beings and things as existing independently and objectively from their own side, we have to analyze the nature of reality.

“Verses towards the end of the sixth chapter of ‘Entering into the Middle Way’ state that the bodhisattva sees clearly that the three realms in their entirety are unborn from their very start, and through the force of conventional truth, he journeys to cessation. He also generates compassion for beings bereft of protection. And like a king of swans, with white wings of conventional and ultimate truths spread wide, the bodhisattva will cruise to the excellent far shore. 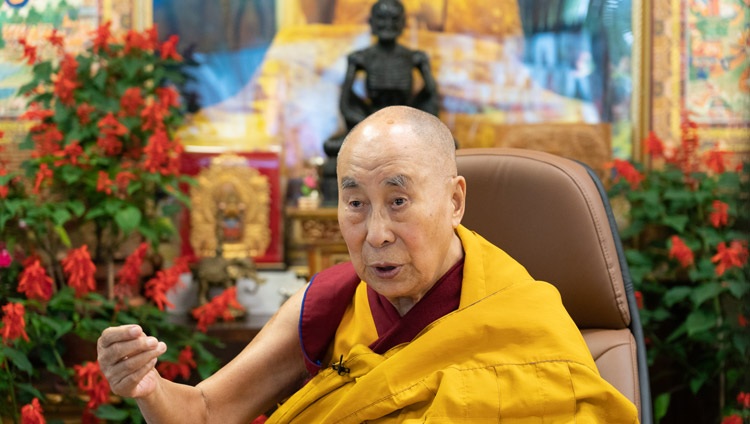 His Holiness the Dalai Lama speaking on the second day of his teachings on Chandrakirti’s ‘Entering into the Middle Way’ online from his residence in Dharamsala, HP, India on September 9, 2021. Photo by Ven Tenzin Jamphel

“I have pondered these lines for decades and I’m convinced that cessation can be attained. It is possible to eliminate all faults, tread the path and achieve enlightenment. There is hope for us to reach the path of seeing.

“We all have Buddha nature. The true nature of the mind is clarity and awareness. The subtlest mind has an innate quality of luminosity and awareness. There are no stains or afflictions at that level. The obstacles that stain the mind are not part of the mind. Ignorance and so forth can be eliminated. When you understand this and can combine an understanding of conventional and ultimate reality, you will be led to the state of omniscience.

“I’m not saying this because it is written in the texts, but because experience has shown me that cultivating bodhichitta and an understanding of emptiness are effective in transforming the mind. It is possible to ascend the paths of accumulation, preparation, seeing, meditation and no more learning. It is possible to attain Buddhahood. Seeing this is to gain a real taste of the teachings. We need to make the effort to transform our minds.

“‘Entering into the Middle Way’ teaches both the extensive path and the profound view, whereas Nagarjuna’s ‘Root Wisdom of the Middle Way’ mainly focusses on the path of wisdom.”

His Holiness took up his reading of the ‘Commentary to ‘Entering into the Middle Way’ from where he stopped yesterday. He explained the Tibetan term for enlightenment, ‘jang-chub’. ‘Jang’ refers to purifying all defilements. When they have been eliminated the mind with the nature of clarity and awareness sees everything as it is. ‘Chub’ refers to having a complete knowledge of everything.

He remarked that it is not enough to see the person as lacking autonomous existence. There is a need to realize that the person lacks any inherent existence. Our sense of an ‘I’ is based on the mind-body combination, our psycho-physical aggregates. As Nagarjuna has written in his ‘Precious Garland’:

A person is not earth, not water,
Not fire, not wind, not space,
Not consciousness, and not all of them.
What else is a person other than these?

Chandrakirti too, having reflected that things lack inherent characteristics, asks, does this mean that things do not exist? His answer is that the person is merely designated on the basis of the psycho-physical aggregates. 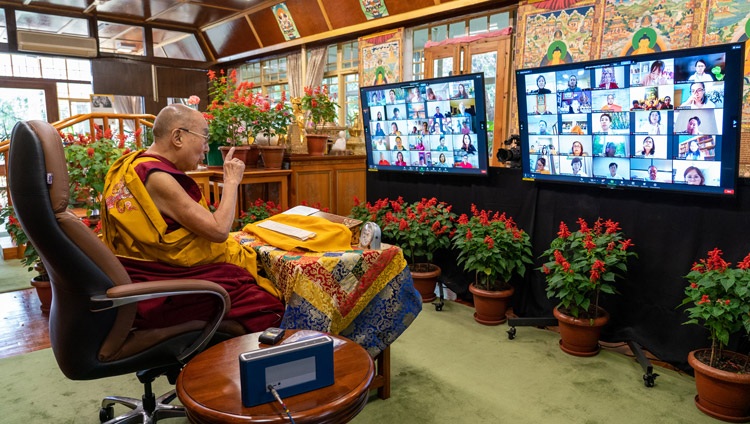 His Holiness the Dalai Lama addressing the virtual audience of Asian Buddhists on the second day of teachings online from his residence in Dharamsala, HP, India on September 9, 2021. Photo by Ven Tenzin Jamphel

The text begins to explore the ten perfections starting with giving, which is the root cause of the awakened state. As Chandrakirti observes:

All living beings eagerly yearn for happiness,
yet for humans there is no happiness without resources.
Material resources, in turn, come about from generosity;
knowing this, the Buddha spoke about generosity first. 1.10

While answering questions from the audience, His Holiness reiterated that when we think of my body, speech and mind we have a sense of solid ‘I’ that possesses them. However, if we search for it, no such ‘I’ can be found. Yet that does not mean there is no self at all. ‘Entering into the Middle Way’ states that the conventional, everyday functional ‘I’, the ‘I’ that is designated on the basis of the psycho-physical aggregates, is not to be challenged. It’s the ‘I’ that appears to the mind as if it has inherent characteristics that is to be negated.

His Holiness explained that actions that bring about a good result are regarded as positive karma, while those that give rise to bad results are thought of as negative. The latter are rooted in ignorance and self-centredness.

Although it’s natural to feel anxious and unhappy about difficulties we face, allowing ourselves to become demoralized isn’t helpful. Consider the problem of climate change, instead of feeling depressed, it’s better to be confident and to take positive steps to plant trees and so forth. His Holiness recommended examining what’s bringing us trouble and judging whether such causes can be overcome. If they can, that’s what to do. If they can’t, worrying about it is no solution.

Asked how to cope with the death of a loved one, His Holiness pointed out that the source of our body is our parents. However, the meeting of sperm and ovum by itself is not a sufficient cause of a person. A third factor is involved—consciousness. The source of the mind is a previous moment of consciousness and it’s because there is a continuity of consciousness that some young children are able to remember their previous lives. His Holiness remarked that since loved ones like parents have a close link with us, it’s likely that we will encounter each other again in the future. 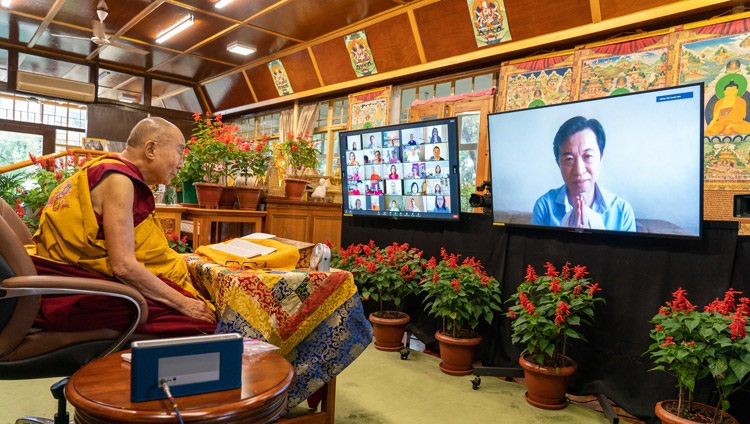 His Holiness the Dalai Lama addressing the virtual audience of Asian Buddhists on the second day of teachings online from his residence in Dharamsala, HP, India on September 9, 2021. Photo by Ven Tenzin Jamphel

With regard to preparing for your own death, His Holiness specified that it’s important to be free of attachment and anger. Buddhists may keep an image of the Buddha nearby, while Tibetans keep a picture of His Holiness to hand. The point is to have a virtuous object on which to focus your attention as you go through the process of dissolution. He added that if you can, it’s good to remember the awakening mind of bodhichitta.

Harbouring a strong sense that there is an independent self has the effect of disturbing our peace of mind. It is eliminated by cultivating a clear understanding of the emptiness of inherent existence.

To conclude His Holiness advised, “You’ve received teachings about bodhichitta, make this your daily practice. In time you will see some transformation. I’ve meditated on bodhichitta and emptiness for decades and I’ve observed change in myself. Please keep in mind that if I can see change, so can you.”

The moderator thanked His Holiness for teaching and went on to thank all those through whose efforts the event had been made possible. His Holiness recited verses of dedication from the Samantabhadra Prayer. 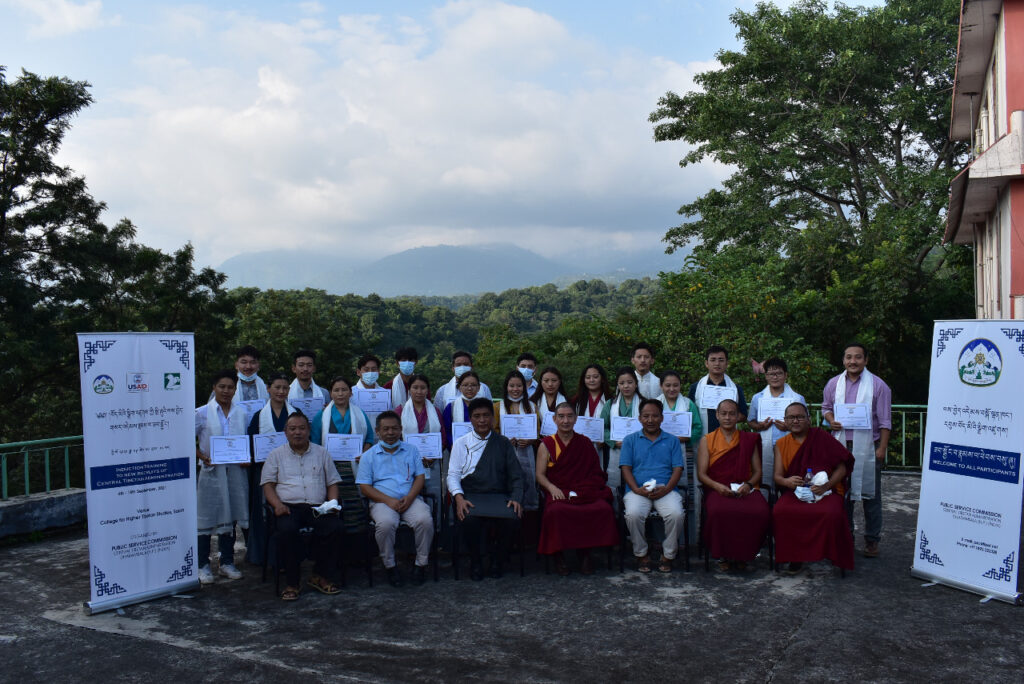