His Holiness the Dalai Lama and Former US President Barack Obama meet in Delhi, call for action for World Peace 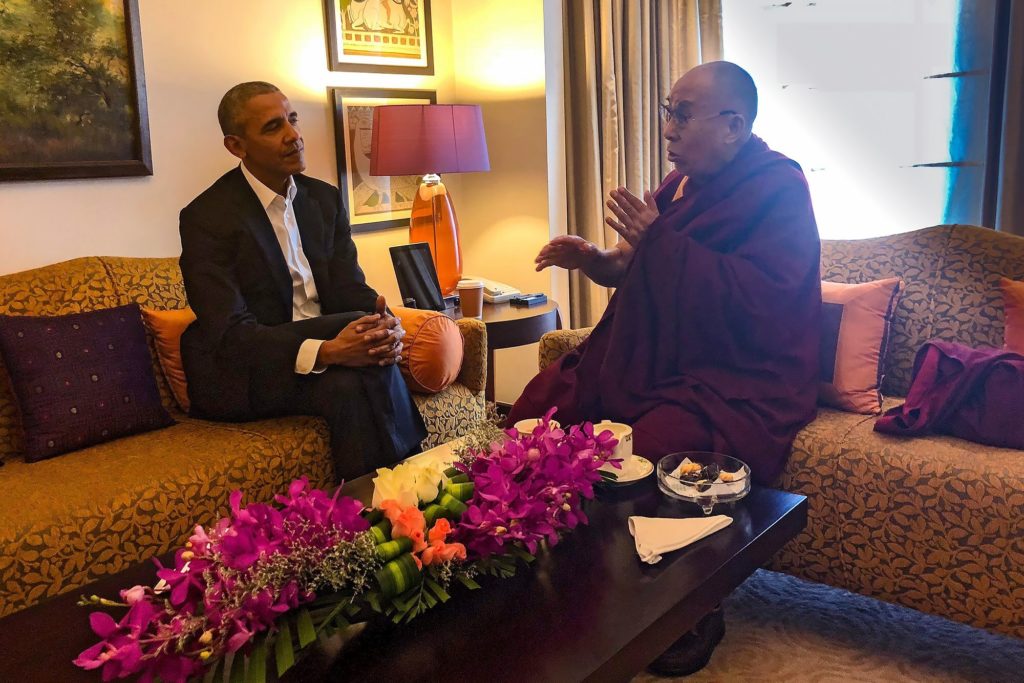 His Holiness the Dalai Lama meeting former US President Barack Obama at ITC MArya in New Delhi on 1 December 2017.

The meeting of the two Nobel laureates, which is sixth in series, took place at the ITC Maurya this morning.

Responding to press at the Gaggal airport on questions regarding his meeting with the former U.S. President, His Holiness said, “It was very good, I think we are really two old trusted friend. I mentioned to him that now time has come for us to promote the sense of oneness among seven billion human beings. It is sad to see there are so much differences among people.”

In an exclusive interview with DIIR media, Kasur Tempa Tsering, who is the India and East Asia Coordinator for Office of His Holiness the Dalai Lama, said that His Holiness had expressed interest in meeting with Obama, and accordingly Obama responded the same.

“His Holiness was very happy to meet his fellow Nobel laureate and also a friend,” he said. Both of them have met five times in the past and have developed a unique friendship.

“The meeting lasted for 45 minutes. The meeting of the former Nobel Laureates dwelled on various topics pertaining to promoting peace in today’s world torn by strife and violence.

“During the 45-minute meeting, both spoke about promoting compassion and altruism in human beings. His Holiness remarked that although basic human nature is compassionate, the materialistic orientation of education today tends instil a sense of selfishness and self-centeredness, while not doing enough to discourage the sense of ‘us’ and ‘them’ that leads to conflict. Both peace laureates discussed the kind of future they envision for the world.”

“His Holiness also expressed that there have been a couple of meetings of the Nobel peace laureates but there were very less action and more of words on paper. His Holiness told Obama that laureates should meet to affect changes for the immediate future.

“His Holiness also said that since he is based in India, he is committed to reviving the ancient Indian thoughts to promote peace and compassion.

After Obama arrived in India last night His Holiness flew out from Dharamshaa at 7.30 this morning and arrived at around 8.30.

The former US President has previously described His Holiness as a good friend and commended his commitment to peace and nonviolence.

In the series of meeting, the former US President has repeatedly emphasised US support for Middle Way Policy of the Central Tibetan Administration. In a press release issued by the White House in 2016, then President Obama pronounced his strong support for His Holiness the Dalai Lama’s “Middle Way” approach and the preservation of Tibet’s unique religious, cultural, linguistic traditions and the equal protection of human rights of Tibetans in China.

Obama arrived last night in India from China. In Beijing, he met with Chinese President Xi Jinping on Wednesday. In India, Obama will speak at a leadership meeting in New Delhi and meet Prime Minister Narendra Modi. He’ll also hold a town hall meeting for young people hosted by his foundation.

Obama is currently on a world tour: China, India, France.

His Holiness the Dalai Lama arrives at Dharamshala airport after meeting US former President Barack Obama in Delhi. Photo/Tenzin Jigme/DIIR

His Holiness the Dalai Lama arrives at Dharamshala airport after meeting US former President Barack Obama in Delhi. Photo/Tenzin Jigme/DIIR