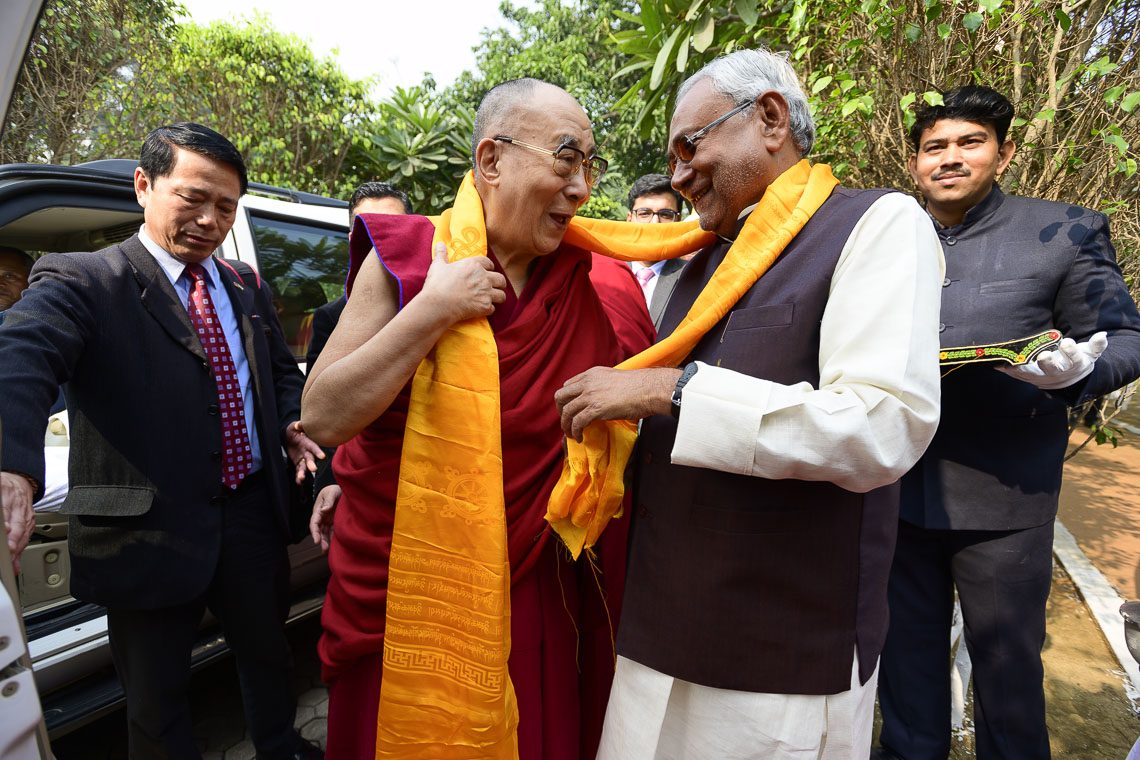 The Chief Minister requested His Holiness to bless a bodhi tree in the garden of his residence, before inviting him to join him for lunch. In the afternoon, His Holiness took a short drive to the state guesthouse, where he retired for the day.

On Saturday morning, His Holiness addressed the Bihar Judicial Academy on how to embrace ‘Love and Compassion as a Way of Life’. He was welcomed by the Chief Justice and Judges of the Patna High Court and planted a sapling in the garden before entering the building.

In his introduction, Chief Justice Sanjay Karol declared, “There are those who are close to our hearts and minds, who do not need any introduction. His Holiness the Dalai Lama is such a man, universally recognized as a man of peace, who describes himself as a simple Buddhist monk.”

“Respected brothers and sisters,” His Holiness began, “we are all the same. All 7 billion human beings are brothers and sisters. Unfortunately, today, there is too much emphasis on seeing others in terms of ‘us’ and ‘them’ – highlighting differences of religion and nationality, and within one country the differences between the rich and poor. Making too much of such differences creates problems for us. The remedy is to recognize the oneness of all 7 billion human beings.

“When they’re young, children don’t care what religious faith or nationality their companions belong to, so long as they are affectionate, smile, and play easily together. It’s only as they grow older that they pay attention to these secondary differences. In fact, from a broader perspective, we are mentally, physically, emotionally the same. We all want to live a happy life, but many of the problems we face are of our own making.”

Among solutions to some of these problems, His Holiness brought up India’s long-standing traditions of ‘ahimsa’—non-violence and ‘karuna’—compassion. He pointed out that being non-violent in our behaviour and compassionate in our motivation are the basis on which our families, communities and nations can live happily together. He observed that the changes that will bring this about will be achieved not through prayer but education. 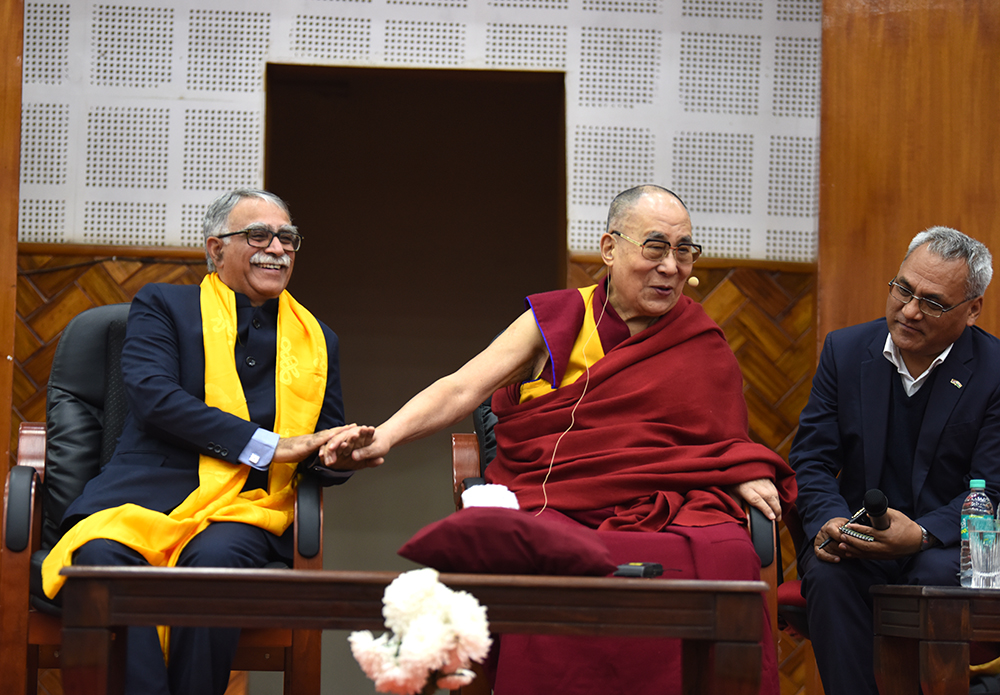 His Holiness fondly holds Chief Justice of Bihar Sanjay Karol’s hand as he goes on speaking about Love and Compassion as a Way of Life at the Bihar Judicial Academy in Patna on 18 January 2020. Photo/Pasang Dhondup/CTA

“If you think about it, it’s clear that violence just leads to mutual destruction. Killing your foe out of anger will only create more enemies. On the other hand, if you think of your fellow human beings as brothers and sisters, you’ll find it easy to reach out to them.

“The proper human approach to settling conflict is to engage in dialogue,” His Holiness continued. “Relying on weapons and the use of force is not appropriate—it perpetuates discord. This is not the way. In order to avoid violence, we must learn to treat each other with greater respect.

“India is a democratic country functioning on the basis of the rule of law. The result is there for all to see. India, the world’s second most populated nation, is peaceful. Indians are free and a major factor underlying this is the existence of the rule of law. Judges and lawyers have an essential role in maintaining a just and happy society. If judges and lawyers only think of “lining their pockets”, it will lead to big problems.”

Turning to historical relations between Tibet and India, His Holiness observed that in the 7th century the Tibetan Emperor chose to develop a Tibetan written script modelled on the ancient Indian Devanagari alphabet. Later, in the 8th century, another Emperor chose, despite close relations with China, to introduce Buddhism to Tibet directly from India.

“This Nalanda Tradition, with its emphasis on the use of logic and reason, gave us self-confidence and determination. For that we will always be grateful to India. From a personal point of view, I became a refugee in 1959. On the one hand, I have become the longest-staying guest of the Indian Government, on the other, I describe myself as a messenger of ancient Indian thought—particularly of ‘ahimsa’ and ‘karuna’. Wherever I go, I carry this message.

“India is also a living example to the rest of the world that all our religious traditions can live together. In terms of the wider community we have several religious traditions teaching several aspects of the truth. I consider the religious harmony we find in India as something wonderful.”

Finally, His Holiness explained his latest commitment to reviving ancient Indian knowledge. “It is important,” he stressed, “to combine modern education, with its goals of material development, with the ancient Indian understanding of the workings of the mind and emotions, allowing us to tackle our destructive emotions and achieve peace of mind. Once these two aspects of education have been successfully combined, we can share what we’ve learned with the world at large.” 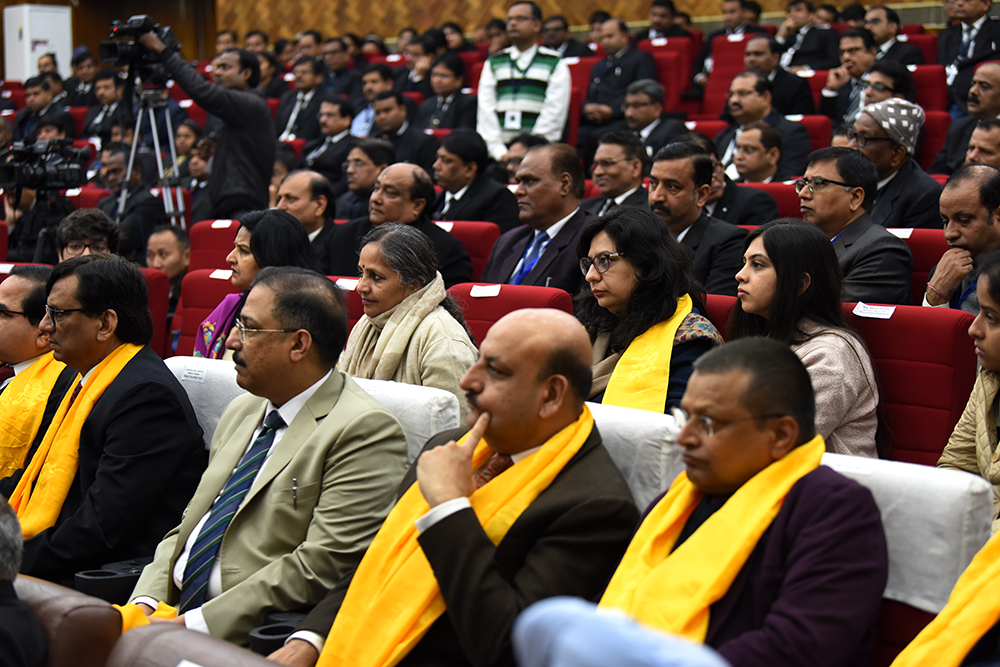 Members of the audience listening to His Holiness the Dalai Lama’s talk at the Bihar Judicial Academy in Patna on 18 January 2020. Photo/Pasang Dhondup/CTA

When asked about being a monk in a materialistic world, His Holiness joked, “To be a monk means to be celibate. It has happened that when I met someone for the first time they were happily married. Then, next time we met, they had another husband or wife. Meeting on a third occasion, they were married again. In such a context I feel it’s good to be a monk—much less trouble.”

A member of the audience stood up to tell His Holiness that he didn’t think of him as a guest of India. “You live in our hearts. You’re an Indian. All Tibetans living in India are our brothers and sisters.”

A question was asked about the coming Buddha, Maitreya, to which His Holiness responded, “Of course, I’m a Buddhist. But there are some things in the scriptures that I do not accept literally. For example, the texts say that Mt. Meru stands at the centre of the universe, but I don’t believe that. It contradicts observable reality.

“Similarly, when we talk about Maitreya Buddha, we have to keep in mind that according to many scientists, the world may disappear in the next few centuries. Global warming is becoming very serious and this planet may become just a desert. We human beings will not be able to survive. In such a context it makes no sense to talk about Maitreya Buddha appearing in the future.

“At this time, it’s more important for us to pay attention to what Buddha Shakyamuni taught. This is the teaching we can actually study and practise here and now. We can think about it the way we think about food. If you have food on your plate today, why would you wait until tomorrow to eat it? It makes no sense. The Buddha’s teachings have been kept alive until now—these are what we should study and practice here and now.”

Leaving the Bihar Judicial Academy, His Holiness drove directly to Patna Airport. He was received there by Chief Minister Nitish Kumar who had come to see him off. They spent more than 30 minutes in conversation before His Holiness took off for Delhi.

His Holiness will undergo a routine medical examination in Delhi tomorrow. He will then return to Dharamsala on 21st January, completing a 44-day tour that has taken him to Delhi, Goa, Mundgod, Bodhgaya and Patna. 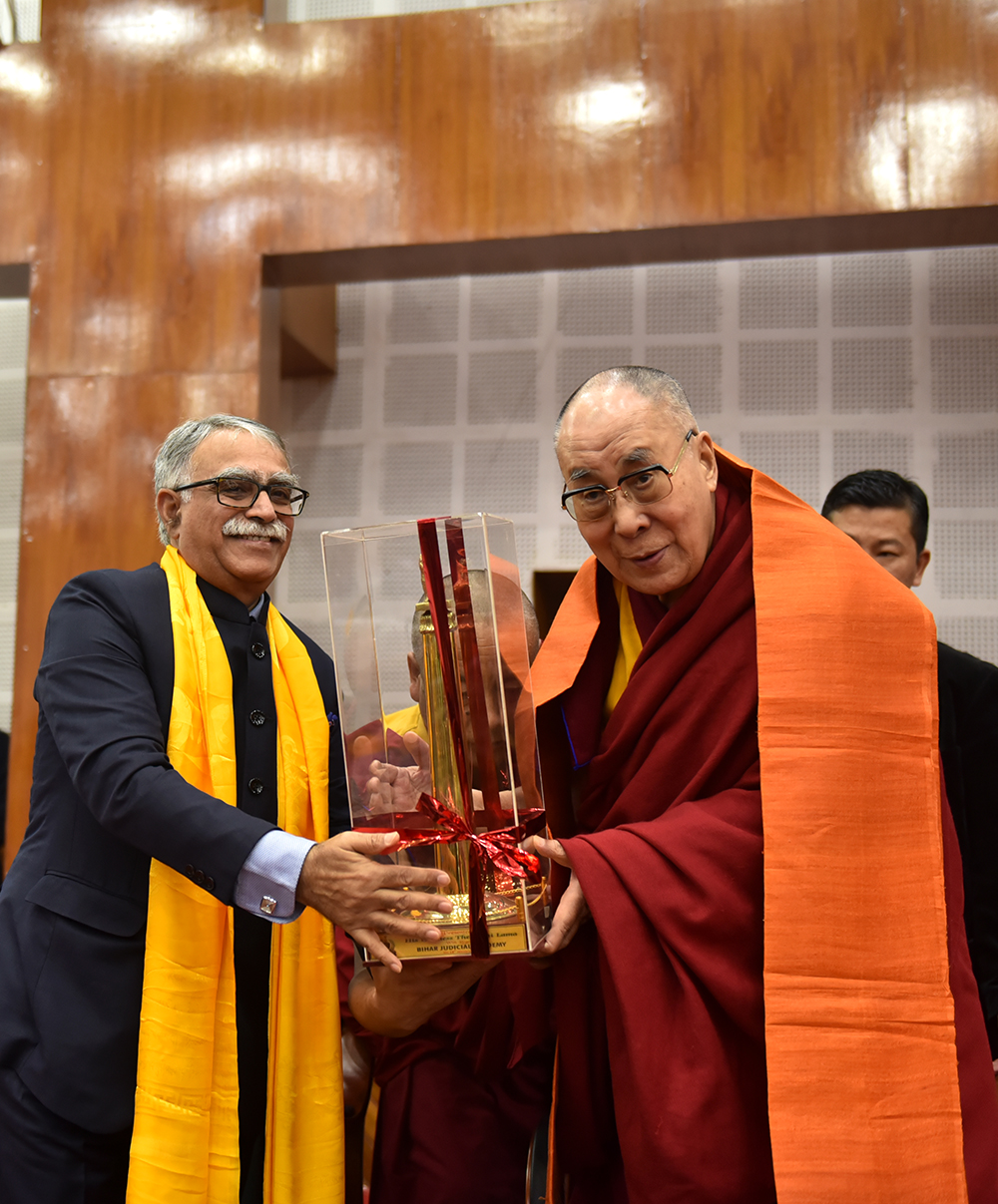 Chief Justice of Bihar Sanjay Karol felicitates His Holiness the Dalai Lama during his visit at the Bihar Judicial Academy in Patna on 18 January 2020. Photo/Pasang Dhondup/CTA 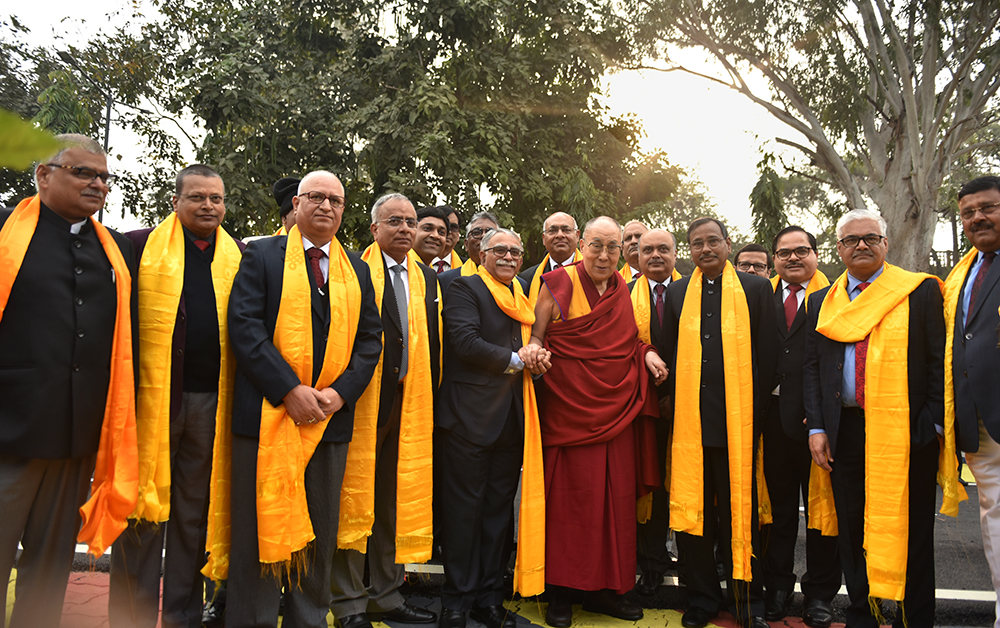 His Holiness the Dalai Lama with Chief Justice of Bihar Sanjay Karol and companion judges of the Patna High Court at the Bihar Judicial Academy in Patna on 18 January 2020. Photo/Pasang Dhondup/CTA 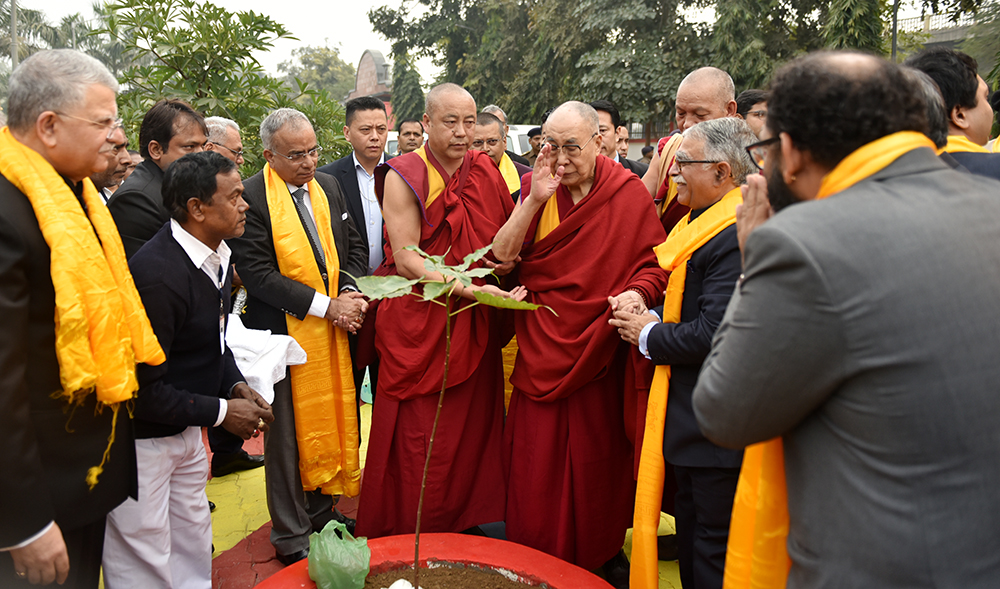 His Holiness the Dalai Lama joining Chief Justice of Bihar Sanjay Karol and companion judges of the Patna High Court in planting a sapling to commemorate his visit to the Bihar Judicial Academy in Patna on 18 January 2020. Photo/Pasang Dhondup/CTA 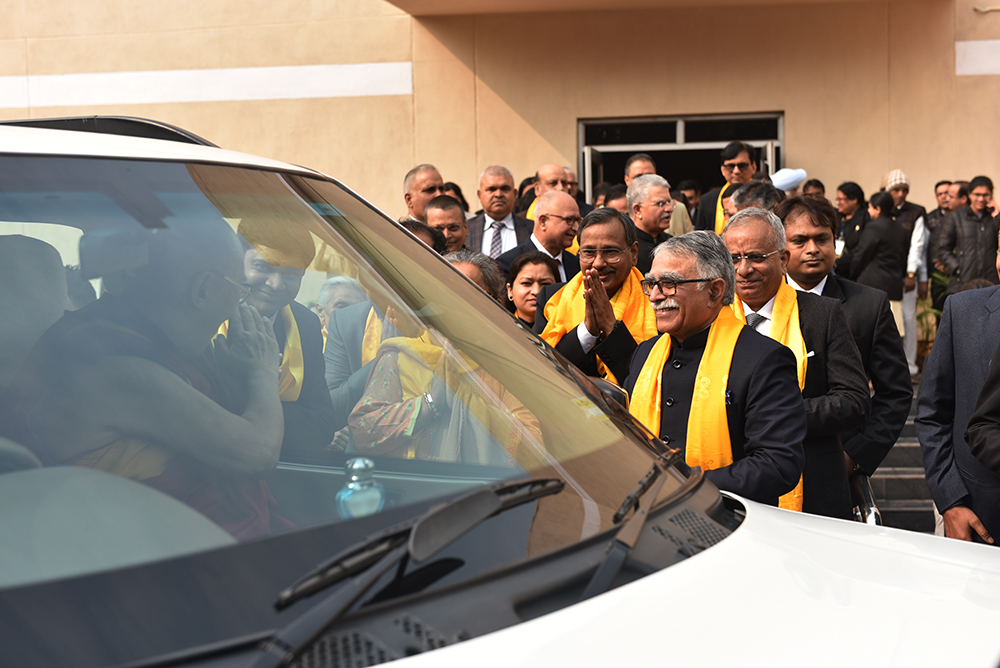 His Holiness the Dalai Lama leaves from Bihar Judicial Academy in Patna on 18 January 2020. Photo/Pasang Dhondup/CTA